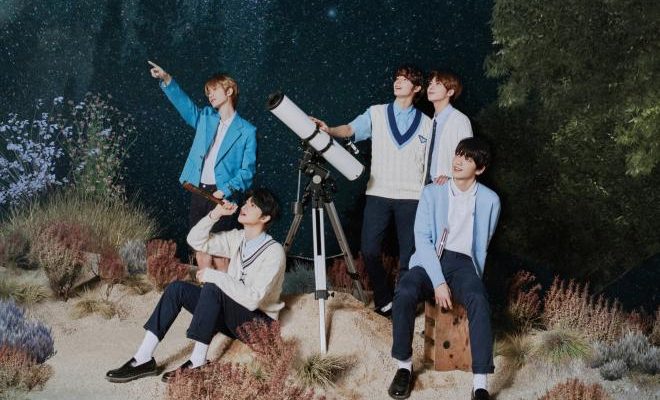 TXT will celebrate their destined journey with fans during their second fan-meeting since debut, titled the 2021 TXT FANLIVE SHINE X TOGETHER!

Tomorrow X Together, otherwise known as TXT, will host their second fan-meeting since debuting in 2019. The group surprised fans with the announcement across their official SNS platforms, as well as on the Big Hit Entertainment fan community “Weverse”.

Fans’ excitement rose upon viewing the announcement poster, which created a whimsical atmosphere. TXT members displayed their close bond, gazing in awe at the starry night sky together. The poster summoned curiosity regarding the story and concept the group will deliver fans during the upcoming fan-meeting.

The event, titled 2021 TXT FANLIVE SHINE X TOGETHER, follows the 2020 TXT FANLIVE DREAM X TOGETHER conducted last year. The fan-meeting is performance-oriented, showcasing stages never seen before on broadcasts. Moreover, the event will honor the anniversary of TXT’s debut on March 4, 2019, creating more special memories between the group and their beloved supporters.

The fan-meeting will run in-person at the Blue Square MasterCard Hall (formerly called the I-Market Hall) in Yongsan-gu, Seoul. However, the event will also broadcast online with live-streaming for global fans. The in-person event will run with respect to government COVID-19 guidelines. If cancelled due to changing public health restrictions, the fan-meeting will proceed solely through digital live-streaming.

Weverse and Weverse Shop will release further details regarding ticket reservations for the 2021 TXT FANLIVE SHINE X TOGETHER. The event will occur on March 6 at 6 PM KST, broadcasting online simultaneously.