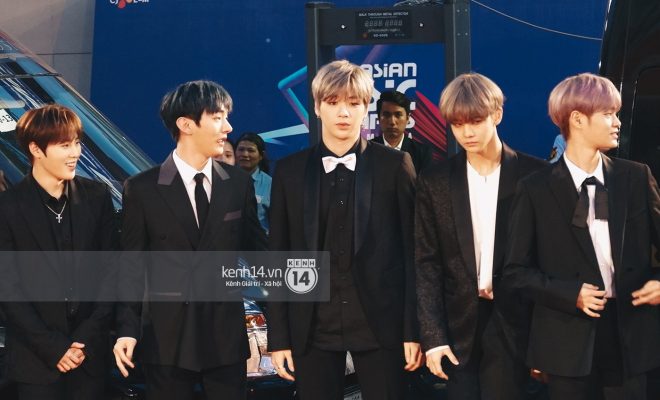 2017 MAMA in Vietnam was completed successfully with great performances from K-pop artists and local stars.

Known as an Asian country with a large number of K-pop fans, after the line-up artists of the award ceremony in Vietnam was announced, it became one of the hottest news among local fans communities.

Appearing on the event’s red carpet, the members of boy groups Wanna One and Seventeen made fans’ hearts flutter with their handsome but manly appearance. Many local outlets praised these K-pop idols as charming characters stepping out of fairy tales.

During the ceremony, Wanna One heated up the stage by its dynamic tracks dubbed “Energetic” and “Burn It Up”, while Seventeen brought fans a series of its hit songs, namely “Well”, “Don’t Wanna Cry”, “WY”, and “Clap”.

The two groups were also honored at 2017 MAMA. Seventeen was named as the owner of Worldwide Favorite Artist award, while Wanna One bagged home Best Of Next prize.

After Vietnam leg, 2017 MAMA will continue its journey to Japan on November 29, and Hong Kong on November 30 and December 1.

43
SHARES
FacebookTwitter
SubscribeGoogleWhatsappPinterestDiggRedditStumbleuponVkWeiboPocketTumblrMailMeneameOdnoklassniki
Related Items2017 MAMABurn it UpClapDon't Wanna CryDuc PhucENERGETICEricHoa MinzySeventeenwanna oneWellWY
← Previous Story JBJ’s First Fan Meeting In Manila To “Come True” In January 2018
Next Story → This Is Not A Rumor! KARD Is Ready To Tour Asia This 2018!