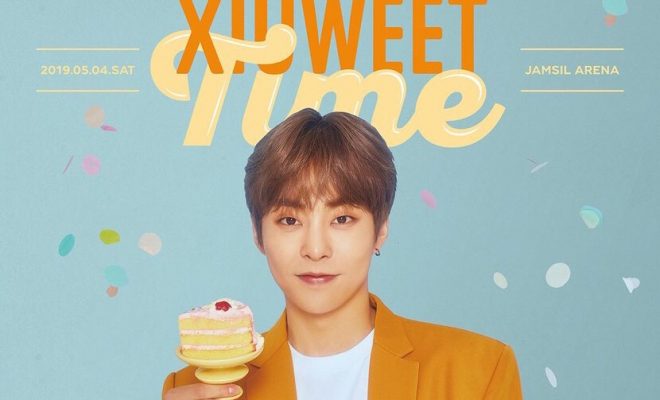 Xiumin To Hold A Sweet Fan Meeting In Seoul Before Enlistment

Xiumin is bidding a temporary goodbye to his EXO-Ls through a sweet fan meeting!

Xiumin has been quite busy lately! The singer has been working with EXO-CBX, and preparing for his upcoming enlistment. Before he bids a temporary goodbye to his beloved EXO-Ls, he will make sure his fans have something sweet to remember him by through an exclusive fan meeting.

The Xiuweet Time: Xiumin Fan Meeting will be on May 4, at the Jamsil Arena in Seoul. Xiumin’s first solo fan meeting will showcase his colorful charms and his breathtaking talent. Fan club members can make ticket reservations on April 17, at 3 PM KST. Tickets will be made available to the public at 5PM KST, through the ticket reservation site YES24.

Earlier this month, Xiumin announced that he will begin his mandatory military service on May 7. Through a post in EXO’s official fan club site, the 29-year-old idol informed his beloved EXO-Ls that he will soon be starting his mandatory military service. SM Entertainment has also confirmed the report while also revealing the singer’s wish to enlist as active duty soldier quietly.

READ: EXO’s Xiumin To Enlist Quietly In The Military Next Month

Japanese EXO-Ls can also spend more time with Xiumin through EXO-CBX’s short tour in Japan. The vocal trio is set to serenade Japanese fans at the MAGICAL CIRCUS – 2019 Special Edition at Saitama Super Arena on April 16 and 17. Soon after, they will melt fans’ hearts at Kobe Memorial Hall on April 27 to 29.