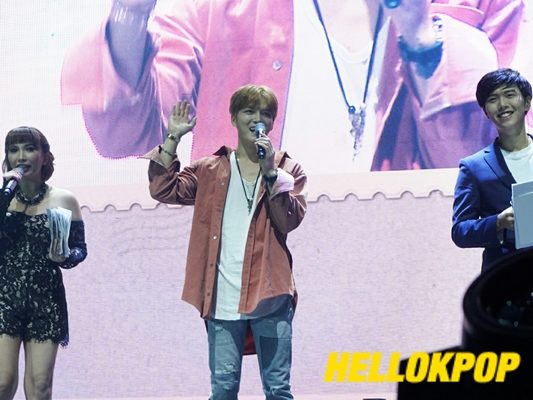 From A Fan: Why 2017 Kim Jae Joong Fan Meeting In Manila Was A Dream Come True

Still over the moon with Kim Jae Joong in Manila!

A decade-long wish of the Philippine fans of South Korean actor Kim Jae Joong just came true last November 30 at the Smart Araneta Coliseum in his very first fan meeting in the Philippines.

It has been days since the very intimate and interactive 2017 Kim Jae Joong Asia Tour Fan Meeting in Manila happened, I, a long-time fan of Jae Joong together with other Filipino fans, am still over the moon and high up in clouds with all the wonderful moments the singer-actor shared with us.  Some can’t even believe it all happened (even local organizer Fangirlasia admitted to it)! 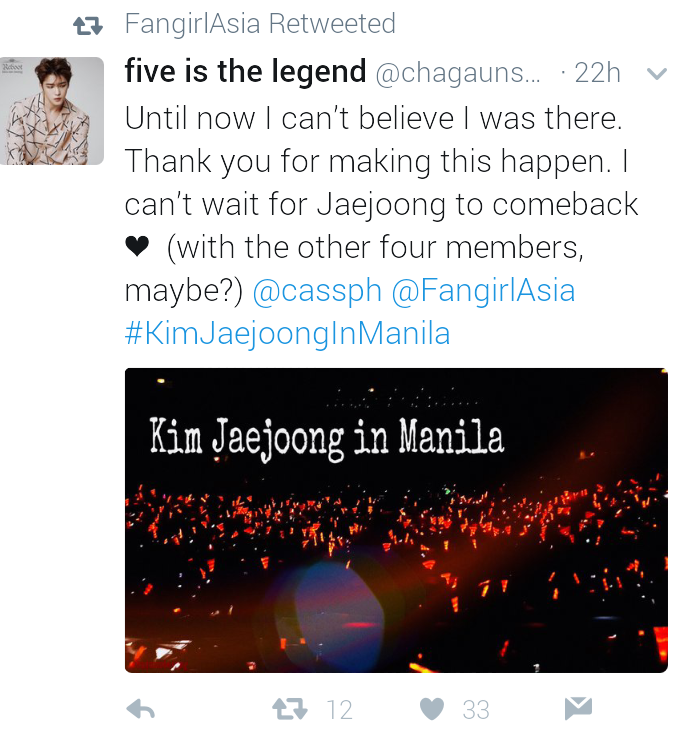 The hangover is real and the 11 years of waiting were indeed worth it. For all Filipino fans who were present at the venue, there seems to be no point in moving on.

As a fan who enjoyed the everything, down to the last bit, of the 2017 Kim Jae Joong Asia Tour Fan Meeting in Manila, here’s a simple rundown of my favorite moments (which were difficult to compress in five bullet points) of the most unforgettable day of 2017.

Every fan knows how active the JYJ member is on social media. With his every selca post is a spot on my mobile phone. Hands up if Jae Joong’s photos occupy more space than any other person’s photo on your phone!

But through the fan meeting’s interactive setting, fans like me got the chance to know Jae Joong beyond his naughty and sometimes weird SNS posts.

He was just too cute! Plus his frankness and honesty (like admitting to losing his stamina that goes with his age or that sword-like no when a fan answered that Filipino fans are pretty).

My heart almost fell on the ground when he did that gentlemanly act of taking off his shirt to cover up a fan with a revealing outfit, and I know many felt the same way too. I even personally thanked the girl after the fan meeting because she was the key for that moment to happen. 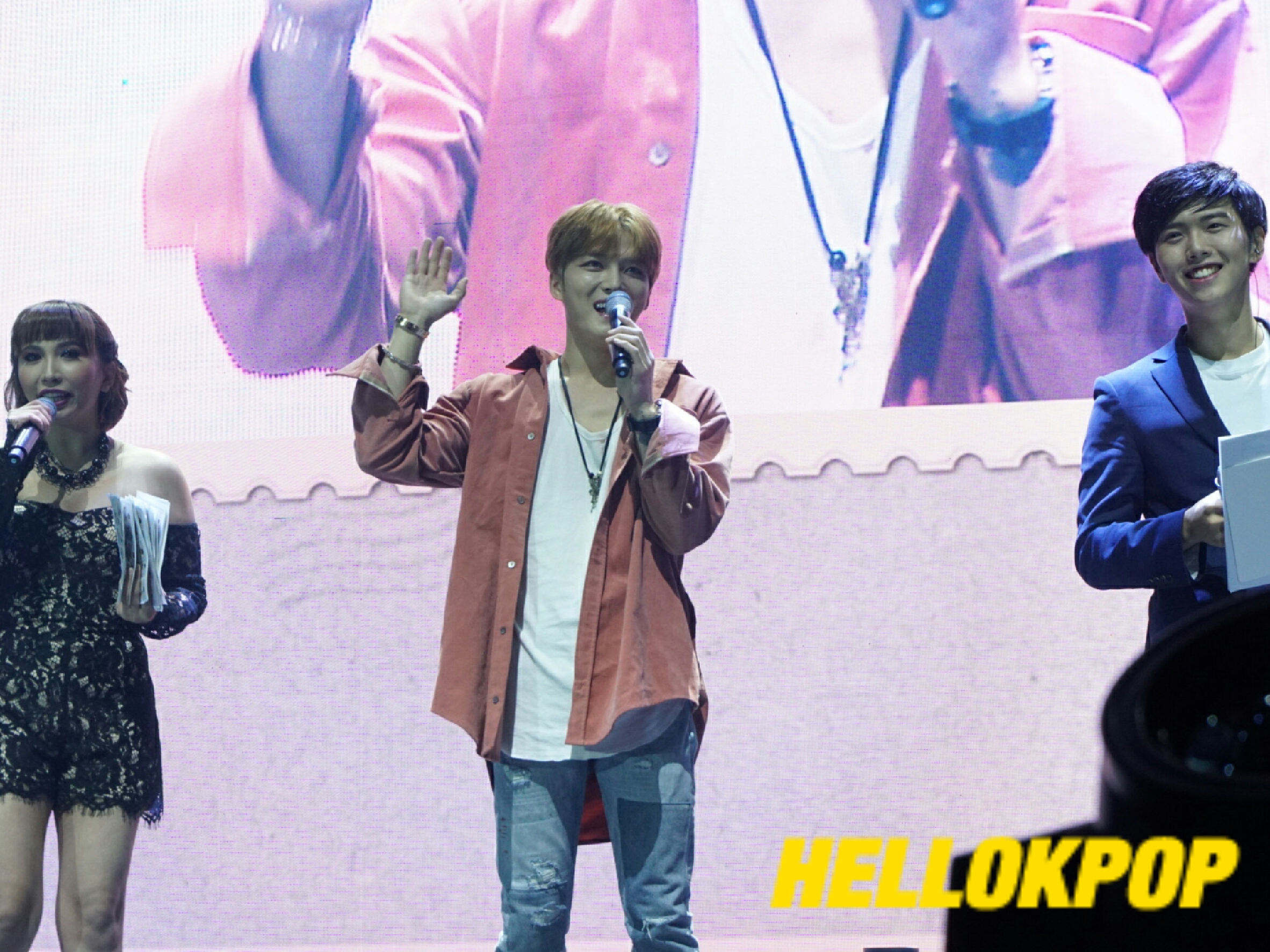 Fave #2: Getting drunk in his presence

I woke up the next day with a feeling of drunkenness and seemingly being floated in the air without even an ounce of alcoholic drink. And it turns out that I was not alone. Many of my fellow attendees were drunk with feels too. I cannot pin point the exact moments where my intoxication began (probably because it’s the whole fan meeting).

Was it when Jae Joong drank beer while saying tagay (cheers)  in the most adorable way tagay can ever be said, or when he performed that lit “Good Morning Night” party stage which made us over and above the moment? Or maybe … it was at that very second when the man of the hour finally made his appearance in the Philippine stage after 11 years.

Whatever it is, his mere presence onstage is enough to make fans gush.

By the way, and I know you know it too, but Jae Joong’s visual is unreal – like a vampire with angel wings. 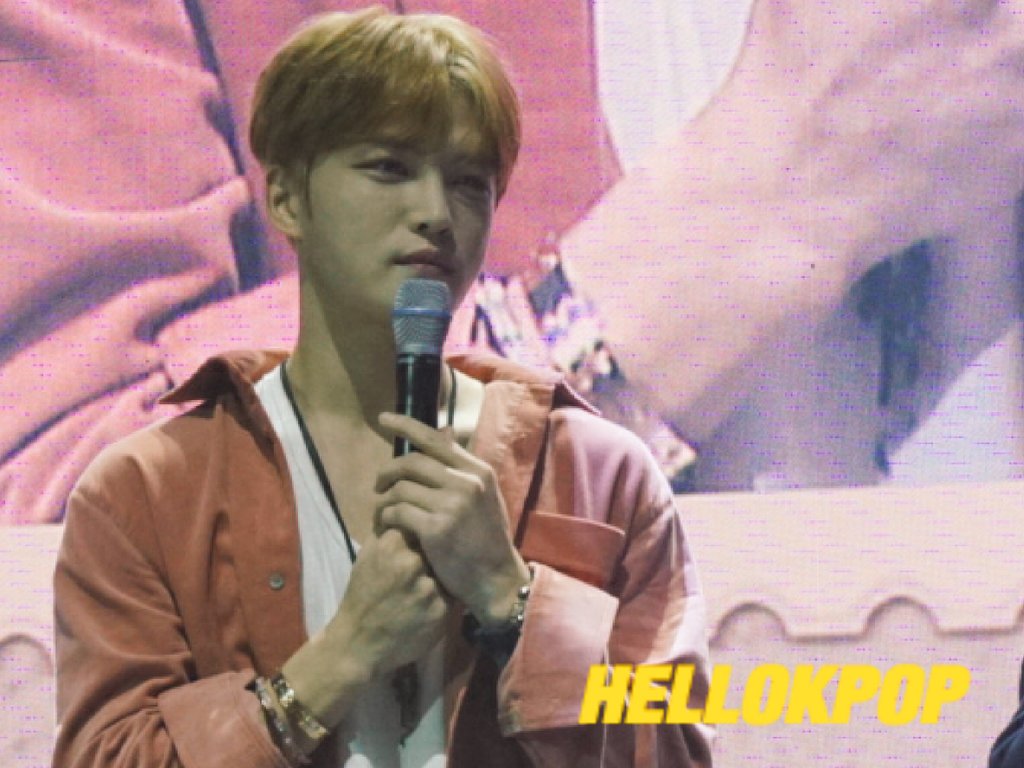 Fave #3: The fan meeting was more than I dreamed of

Since that V Live broadcast where Jae Joong hinted on his Philippine visits, the excitement was beyond. Everyone was excited to finally meet the person we loved for a decade.

When Kim Jae Joong came out of the stage in his blonde handsomeness, loud screams and cheers from the fans who have patiently waited for this moment immediately filled the venue.

I almost forgot I was standing in front of the stage. I let out my loudest scream while trying not to faint from the kilig. Seeing Jae Joong was enough, but the South Korean singer-actor believed otherwise. If Filipino fans prepared fan projects, Jae Joong gave us more than we dreamed of.

From his very adorable and almost fluent Filipino greetings “Mabuhay! Ako si Kim Jae Joong. Kamusta kayong lahat? Salamat po”, to gamely playing with and honestly answering fan questions, to being up for every song requests and dare, we couldn’t ask for more. But that was not all, Jae Joong poured out his 200 percent with an hour-long mini-concert.

The 3-hour fan meet-concert was more than what we have ever dreamed of. It was truly worth the wait! 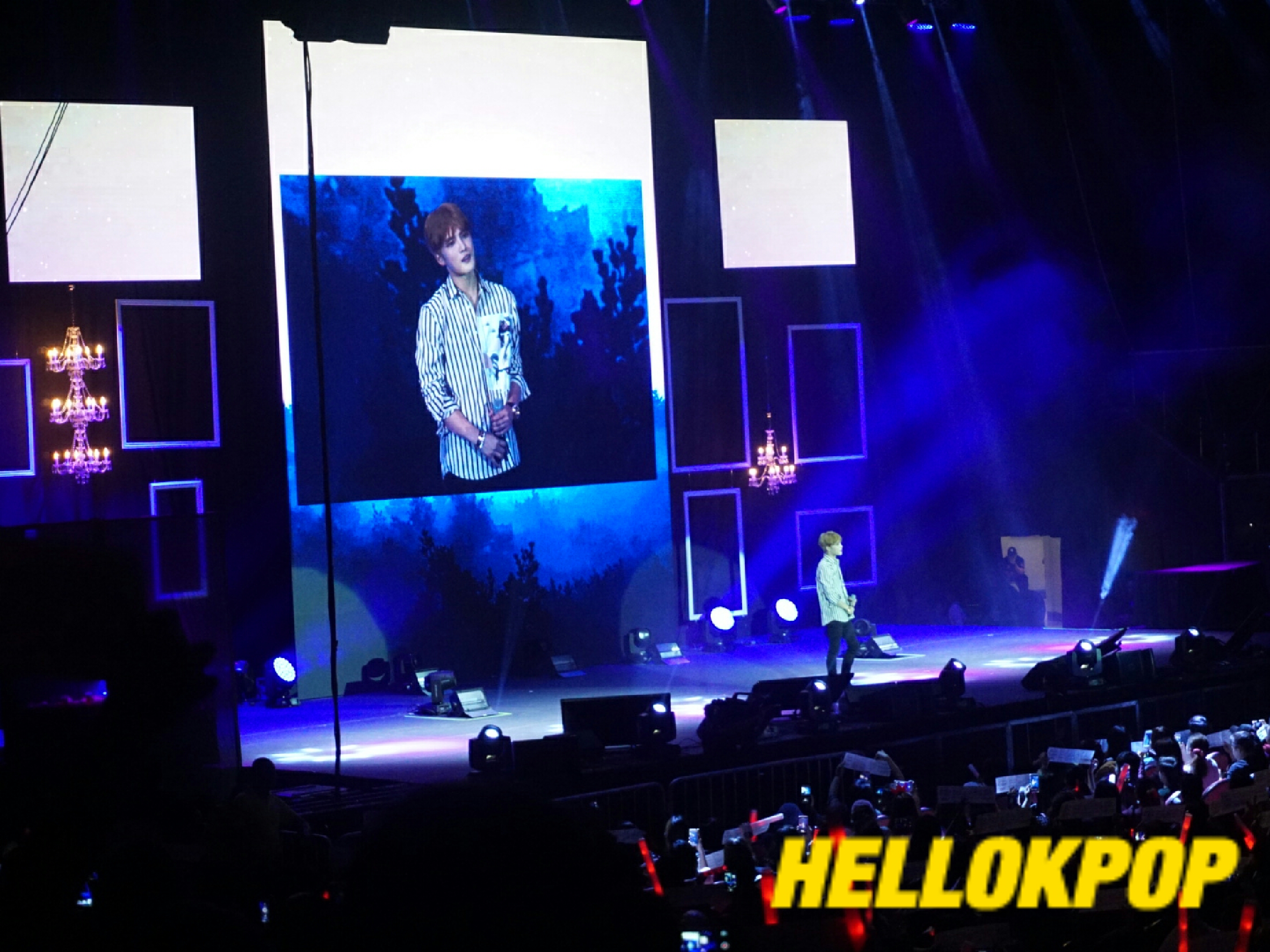 Fave #4: The mutual love of Filipino fans and Jae Joong

“I came here because I know the fans are excited to see me. And I am excited to see you too. I’m happy to see you happy” – those were Kim Jae Joong’s words in the middle of serenading us with his superb vocals.  I and everyone in the venue surely felt his love.

Even before the fan meeting, we already felt the warmth of his love. I was one of the overly excited lucky fans who won the fan signing raffle for a once-in-a-lifetime chance to meet Jae Joong up close.

Approaching him was both a knees-weakening and one-for-the-books moment as he flashed his very sincere big smile while I was still meters away from him. It was like I froze for a few seconds until such time I finally realized Kim Jae Joong was in front of me. Jae Joong is a nice swoon-worthy person to love, indeed.

And it’s not a one-way street. Towards the end of the fan meeting, everyone could really sense his emotions going up, almost teary-eyed as he felt the love from the Philippines.  “Thank you, Philippines. I love you.” – This is his parting words before he left the stage.

The feeling is mutual, and we all wished for another encore! 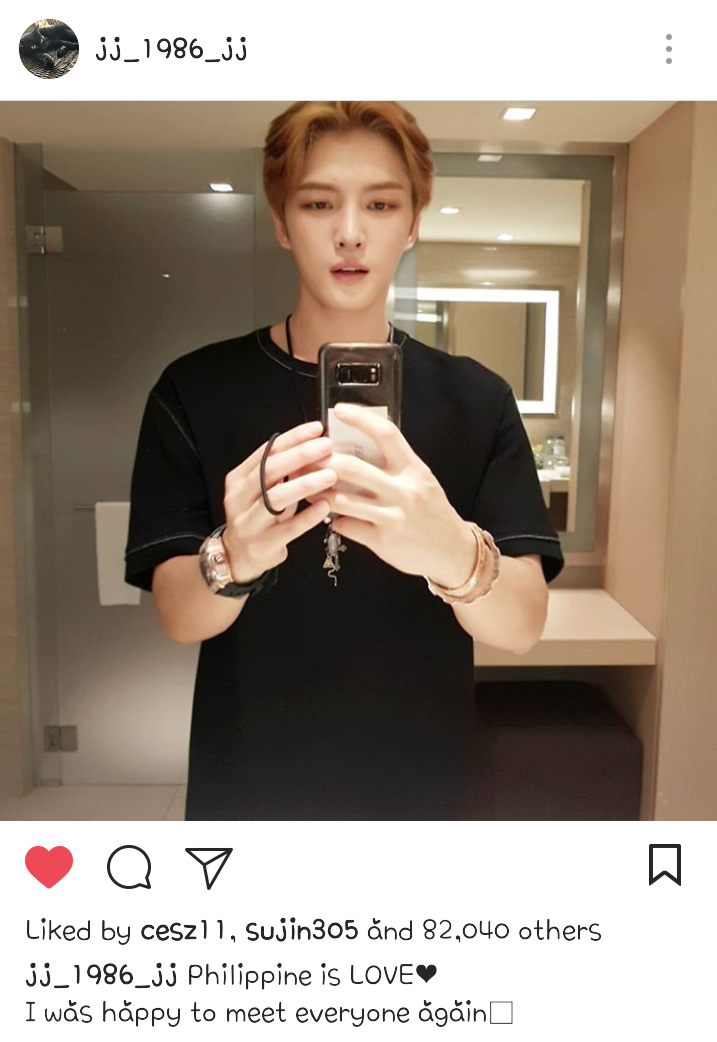 Fave #5: “Philippines is Love.” Kim Jae Joong seemed to have left his heart in Manila.

It was so evident in his glowing smile that he was the happiest (more than his Filipino fans) on the night of the fan meeting. He looked like a teenager who just met a bunch of girl admirers, silently giggling in happiness.

And no doubt, he just fell in love with the Philippines because of the warm response he received from everyone in his short stay in our country. With his more than 10 Instagram posts related to the Philippines (including those sad emojis on leaving our country), we all know he will surely come back soon.

Jae Joong seemed to have left his heart in Manila.  Fan girls and boys’ goals achieved for the Philippines indeed as we got a “Philippines is Love” Instagram post from Kim Jae Joong of our dreams.

True to what was written in the banners which the fans held, “Today is an Unforgettable Miracle”. 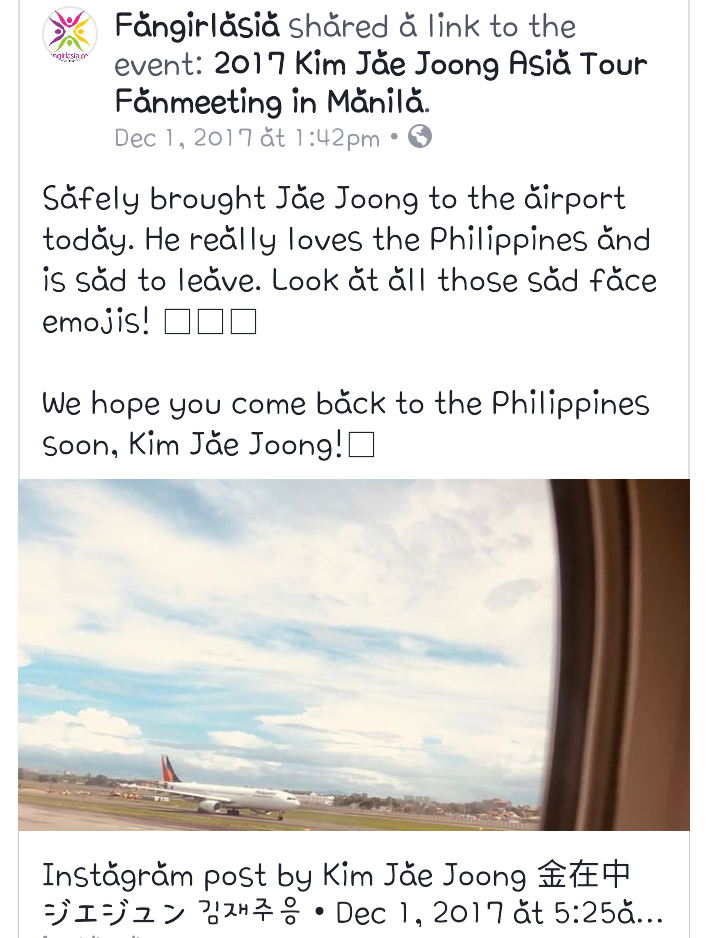 Did this list help you to sober up and realize that Kim Jae Joong in Manila really happened? Or did I put you more in sepanx mode? Are you still humming “Now is Good” and “Good Morning Night” every now and then?

I can feel you, because like you, the memories of the 2017 Kim Jae Joong Asia Tour Fan Meeting in Manila still lingers. Let’s keep our fingers crossed that Jae Joong returns soon! And like how we promised last November 30, we will be there to greet him once more, right? 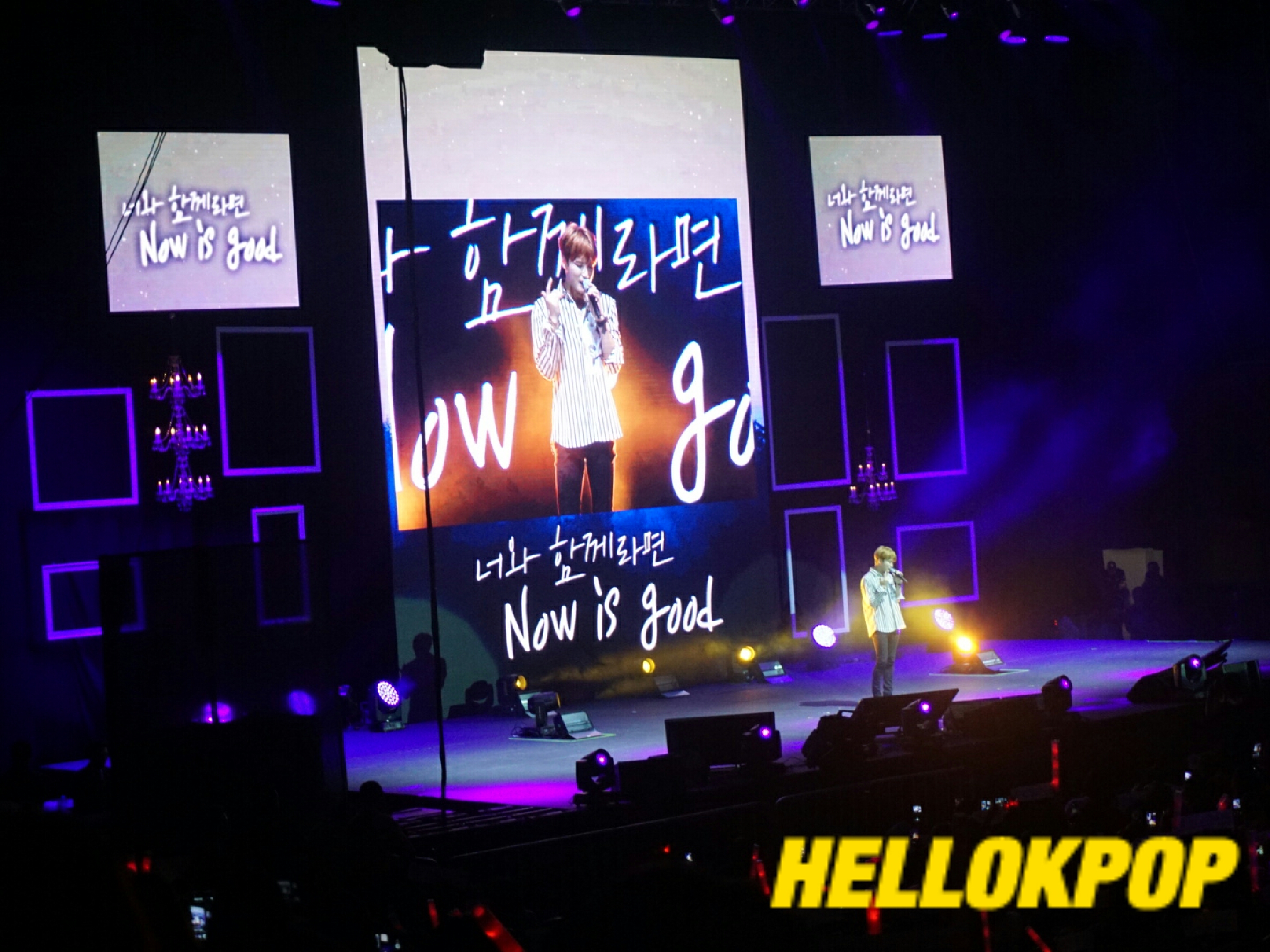 The 2017 Kim Jae Joong Asia Tour Fan Meeting in Manila is brought to fans by UnUsUal Entertainment Pte Ltd and C-JeS Entertainment, and supported by Fangirlasia and Showtime.

Special thanks to Fangirlasia for the invitation to the fan meeting.