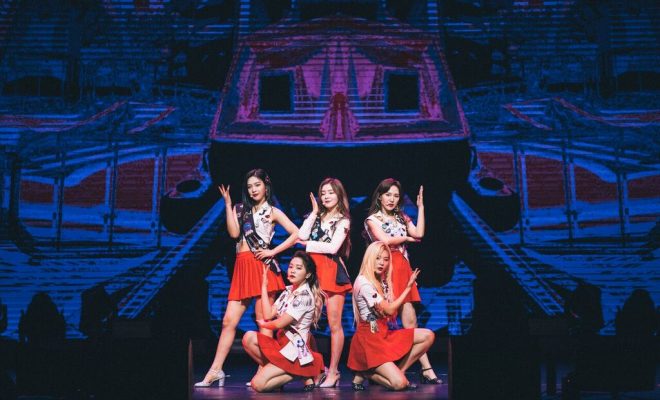 REDMARE in Singapore is HAPPINESS!

Deserving to be doted by Red Velvet, Singapore ReVeluvs were treated to refreshing sets of performances from their favorite girls at REDMARE on October 20 at The Star Theatre in Singapore.

Albeit Joy’s unfortunate injury which left her no choice but to leave the stage, Irene, Seulgi, Wendy, and Yeri sparked a night to remember for their fans who welcomed them in roaring cheers and warm smiles. 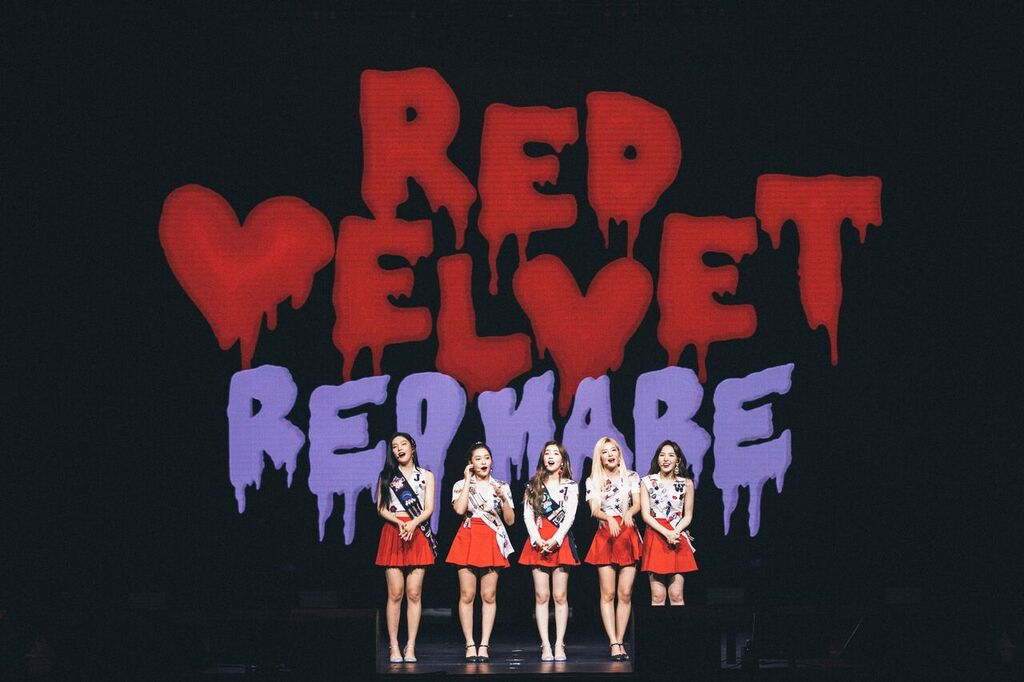 As soon as the introduction video erupted on the stage, the crowd unitedly scream in happiness while chanting the members’ names. Irene, Seulgi, Wendy, Yeri and Joy did not disappoint their waiting fans as they appeared to warn the audience of a fired-up party they prepared that night.

Clad in white and red skirt, Red Velvet threw the onsite fans in frenzy with its hit tracks “Russian Roulette”, “Power Up” and “Cookie Jar”. Engaging with the audience, Seulgi asked if they enjoyed their latest track release, with Wendy offering to teach the point choreography of “Power Up”. Fans willingly obliged and sang along, as they have known the dance routine, delighting Red Velvet who praised them how they don’t need teaching at all since they seemed to know it. 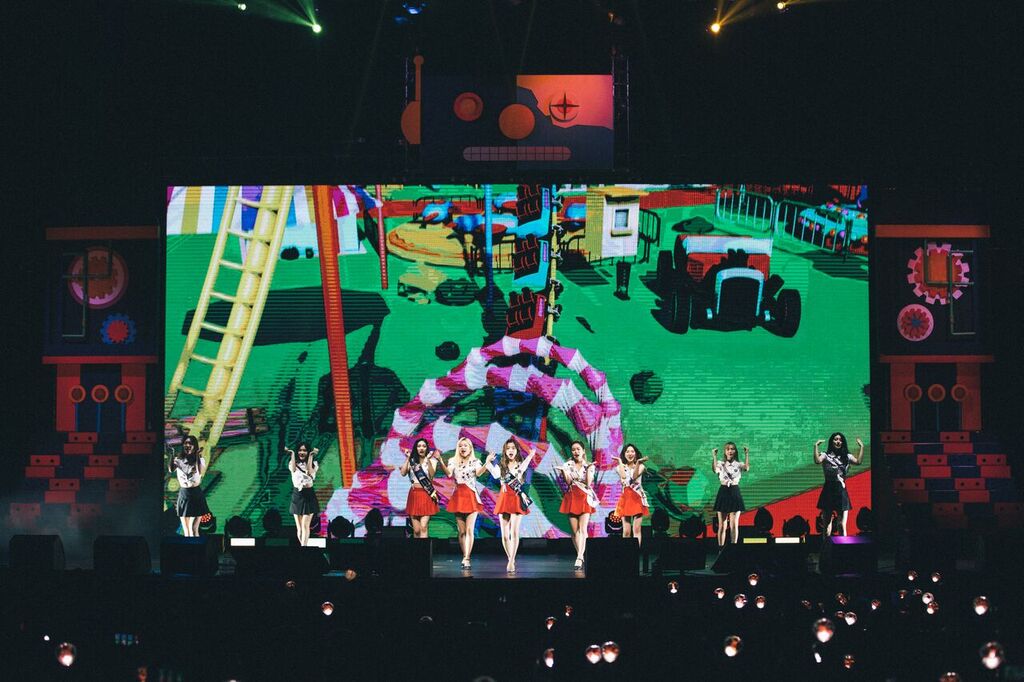 (Photo Courtesy of ONE Production SG)

2. A binge of happiness

The members resumed their spirited drive for their lively second set of a colored safari-theme backdrop. Wearing vibrant girly dresses in variety of colors, they accelerated the already heating up momentum with renditions of “Mr. E” and “Zoo”. They followed it up with “Happiness”, which saw the crowd dancing along together, before crowning it with “Hit That Drum”.

Donning colorful outfits with heart figures in the middle, Red Velvet carried on REDMARE in SG’s intensity to another level by displaying synergy in “Lucky Girl” and “Bad Dracula”.

Catching up their breaths, the girls settled for some spontaneous chats with the energetic fans. Wendy said hi to the attendees in the second level. They also explained how they named the group’s lightstick as kim-man-bong, coming from kimchi + mandu bong.

The girls also shared that REDMARE robot’s name is REVE. Yeri, who named the robot, explained that “reve” means mystery in French.

Fully focused on REVE 101, Seulgi, who drew REVE, quipped “you not done?” to Yeri’s lengthy blab about their conceived robot, which drew laughter from the audience. 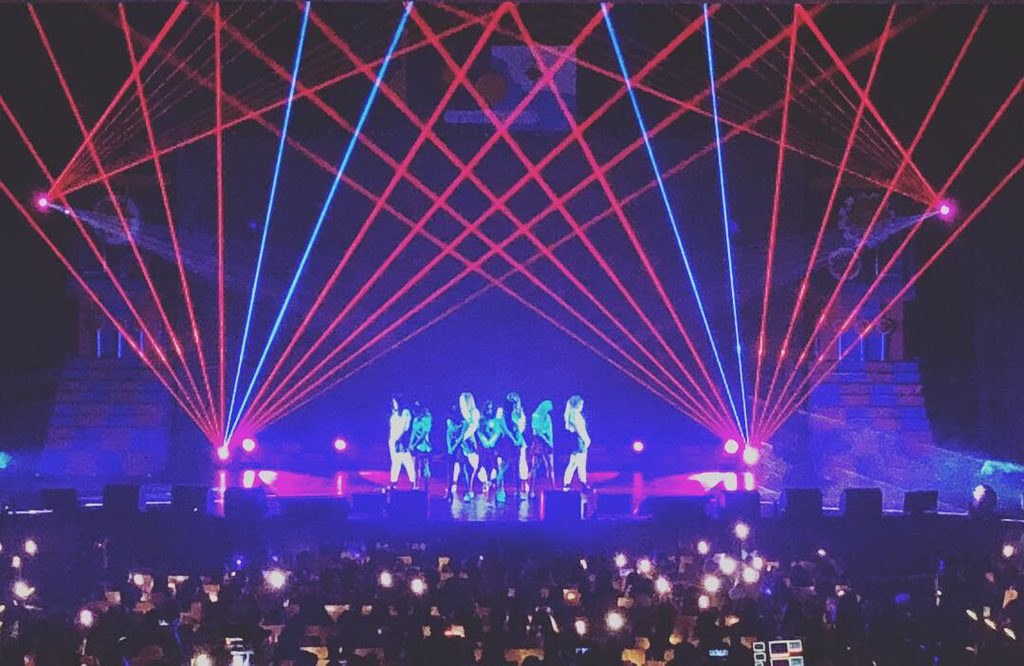 Truly comfortable with their fans, the girls went to talk about their hair colors, which have changed since their last visit. They shared how much they enjoyed munching local dishes such as pepper crabs, chili crabs, and mantou. They also mentioned how they ate kaya toast which they heard to be popular in the country before they hit the stage earlier.

Attentive to their cherished followers, Red Velvet made the concert felt like a fan meeting because of their genuine casual interactions with them.

They remarked how they want to converse more with the fans since they had to turn and dance around so they couldn’t really see their faces. Seulgi said that the night was a good day to take a look at each of their fans’ faces.

Joy, who stepped out of the stage, re-emerged and apologized that she could no longer continue because she injured her arms. She teared up while talking about her need to go to the hospital to get an immediate treatment when she really wanted to perform for their fans. She wished for the audience to still enjoy the show.

The crowd shouted “kwaenchana” (that’s okay) and “fighting”, fully understanding of the need to prioritize the health of the injured member.

The remaining Red Velvet members assured the fans that the concert would continue and told the fans to enjoy themselves with what they prepared for the night. 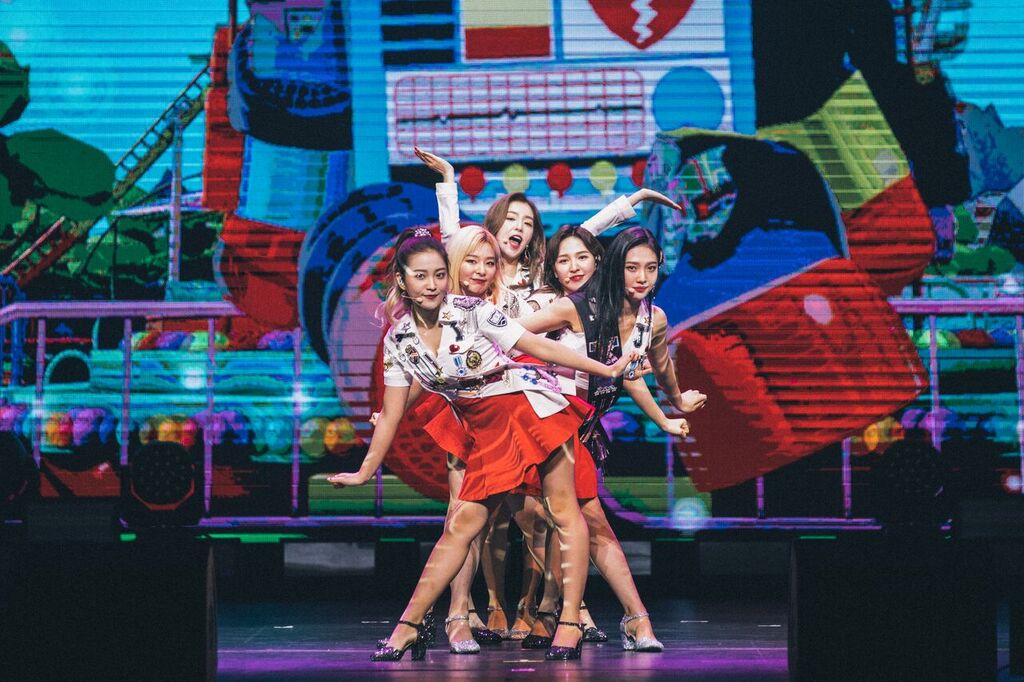 Kudos to Irene, Seulgi, Wendy, and Yeri who owned the stage with “All Right” and “Blue Lemonade”. Waving their kim-nam-bong lightsticks, they serenaded the viewers through their song “About Love”.

Returning the warmth fans received from the adoring girls, they threw in a quick fan event by raising paper hearts, along with the lightsticks to accompany Red Velvet with its “Moonlight Melody” presentation. 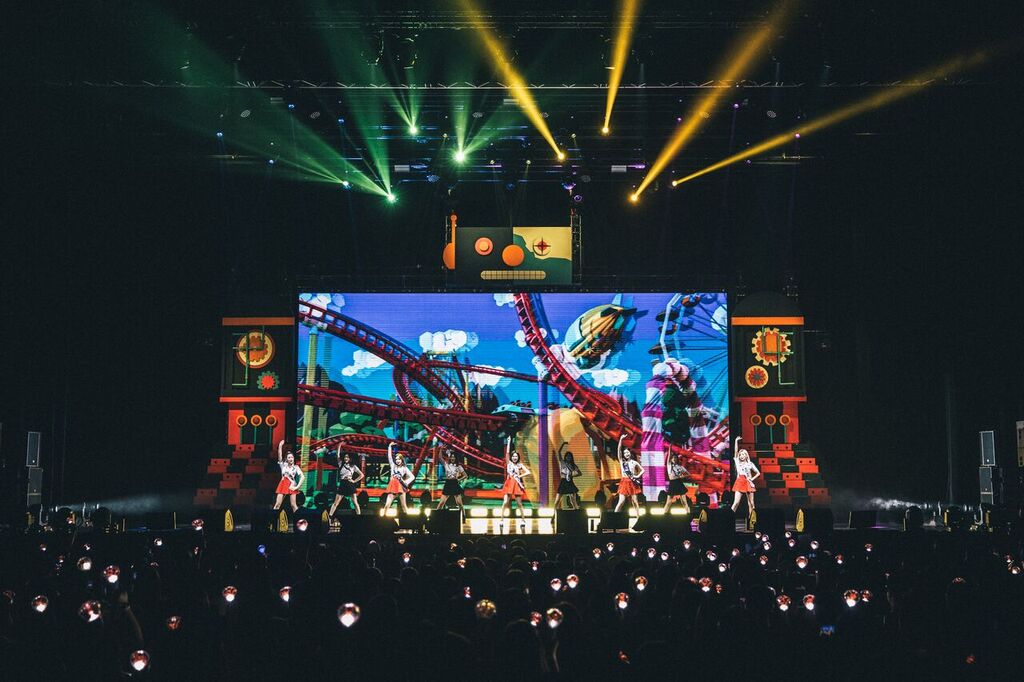 A thrilling VCR kick-started another set of songs of the girl’s REDMARE in SG stage. Suited up in black outfits, Red Velvet spurred its “Bad Boy” performance with the crowd participating enthusiastically by exclaiming the fan chant in unison.

Fans sang along as if they practiced with the girls the whole time in “Peek-a-boo” before ending the sequence with a bang through a remix of “Dumb Dumb”.

Laying low, the fans responded yes when Wendy asked them if they got scared of the video. She appreciated how fans kept their promise of cheering hard for them.

The rest of the girls expressed gratitude for the thoughtful surprise fans gifted in their “Moonlight Melody” number. 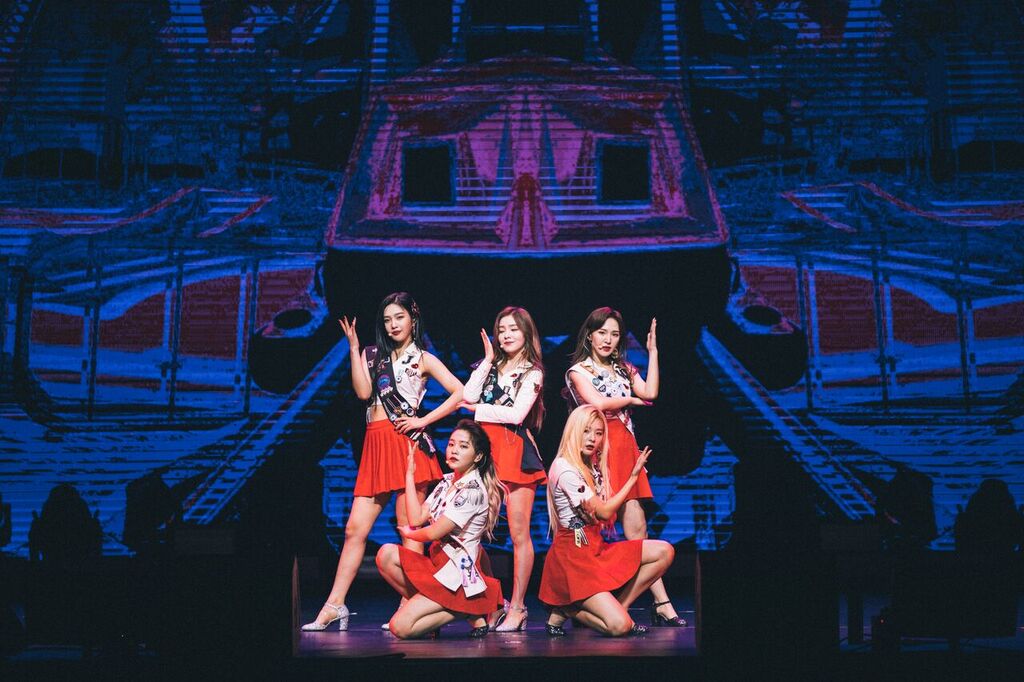 Playing with the fans, Seulgi said how the robot dance was a first for them to do a robot dance choreo and urged fans to try it. Responsive Singapore ReVeluvs moved in the speed of light to Seulgi’s coaxing, delighting the members.

Close to the waning moments of the concert, Red Velvet and their fans brought the venue down when they exploded together in a party of “Red Flavor” and “Rookie”.

Still high from the blazing finale song treats, the girls obliged to the fans’ encore request by frosting the amazing night with “Ice Cream Cake” performance.

Red Velvet thanked the fans for the encore cheer and relayed the news that Joy arrived safely in the hospital.

Wendy said she had a blast that night and hoped that fans felt the same way. She added how they are gifts to them and how they are able to perform because of them. She wished that they will await their next concert with five of them on the stage.

Seulgi apologized that they were not able to share a perfect stage because of the unforeseen circumstance that happened. She thanked fans for helping them throughout the evening. She assured fans that what happened would be a valuable experience for them to become a stronger Red Velvet.

Yeri praised the audience for being energetic helping them to finish the concert they prepared. She also regretted not being able to show a complete stage of five members, but promised to come back with a more beautiful Red Velvet. She ended it with a genuine “thank you” to the fans.

Irene revealed how she got swept by the superb moment of hearing fans singing “Red Flavor” that she took of her in-ears to dance along with them. She was grateful with the immense support which helped them finish the stage. She thanked the fans for taking their precious time to be with them. She ended it with a shoutout to the delicious food and good sleep which Singapore gave them, and promised to be back to meet their Singapore fans again.

Irene, Seulgi, Wendy, and Yeri closed their concert with “Day 1”, while fans waved their banners, happy and beaming after a sweet nightmare they did not wish to end. 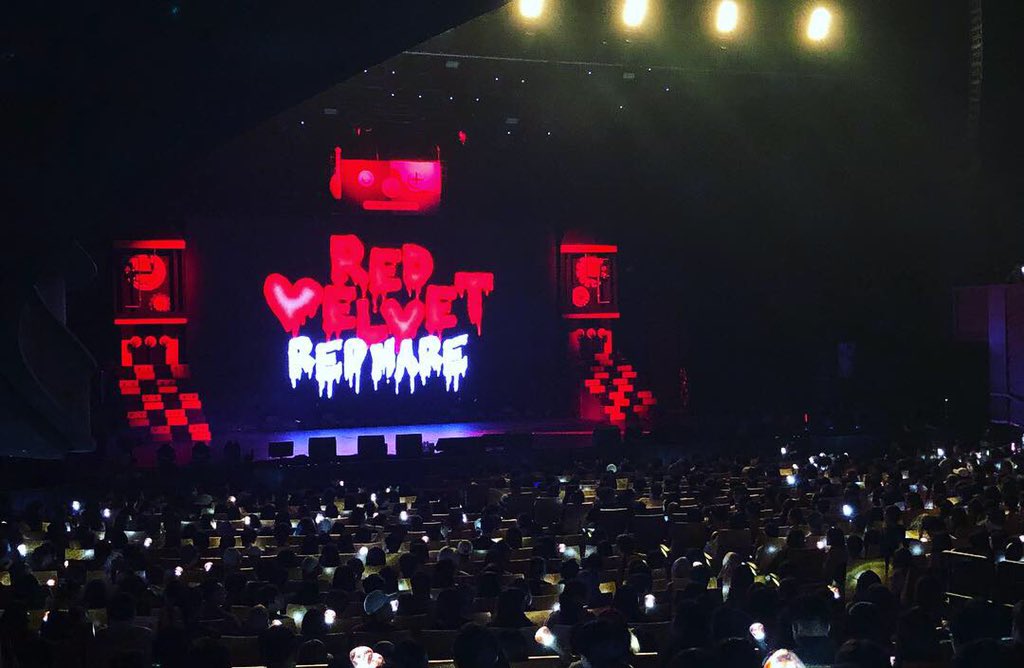 Special gratitude to ONE Production for the invitation to the concert.

ONE Production released an official statement regarding Joy’s injury and thanked fans and the media for understanding the situation.