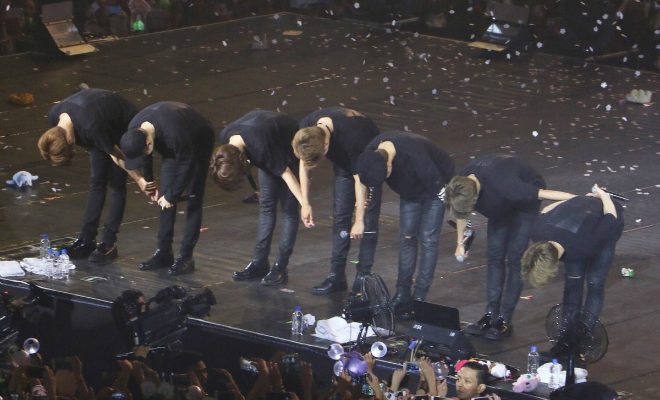 BTS was on fire!

The highest recorded temperature in Manila might have been recorded at Mall of Asia Arena on May 6 and 7 as Korean boy group BTS put the stage on fire with blazing performances and unforgettable memories during its two-night ‘2017 BTS LIVE TRILOGY EPISODE Ⅲ THE WINGS TOUR’ concert.

After staying for a week in the archipelago and wrapping up the Manila leg of the third live trilogy, it’s time for Philippine ARMYs to say “see you again” to the septet.

But cry not for we got you covered! Hellokpop is here to give you something to hold on to while keeping your fingers-crossed for their next concert.

Read on and look back with us as we list down five times WINGS TOUR in Manila was lit.

The arena was already burning with much feels as the boys opened the show with their newest hit Not Today from the repackaged album ‘You Never Walk Alone’, which was followed by Am I Wrong, a track from the second studio album ‘Wings’.

But the scorching heat of their performances was up by another level with each member’s solo stages, starting from youngest member Jungkook. He showed Manila what a golden maknae is made of with Begin. There was also no lying that Jimin was every bit of a dancer in his performance of Lie, while Rap Monster‘s Reflection did not only show his capabilities as a rapper but ARMYs’ love for him as well by filling the arena with purple hearts and saranghae.

V took the baton next with a soulful stage of Stigma, and J-Hope took fans to his growing up years with childhood photos while performing MAMA. Eldest member Jin, on the one hand, kept the feels “wide awake” in his Awake stage.

Although the members’ solo stages were all impressive, Suga (probably) shone the brightest with his solo stage First Love that was both theatrical and emotional. Despite the language barrier, the rapper successfully relayed his emotions through his raps partnered with a mini orchestra that just exploded all the feels. And don’t we all love a Min Yoon Gi by the piano?

We love all the stages BTS did from their opening song to Silver Spoon, Save Me and Dope. But admit it, there is nothing more nostalgic than watching BTS perform their past title songs live. And WINGS TOUR in Manila delivered just that, with a medley of N.O, No More Dream, Boy In Luv, Danger and Run.

It was a trip down memory lane and bittersweet but we are all proud parents, happy to witness how our ‘sons’ have grown up, aren’t we? From school boys singing about school and their dreams to men delivering hit after hit, and hitting us just right in the feels with their songs on friendship, love, youth and even societal issues, BTS has indeed grown up.

The bar has just been raised, idols. If you are the next group that will be coming over to the archipelago, you should begin to learn Filipino words now.

BTS’s one-week stay in the Philippines was worth it and WINGS TOUR in Manila saw the fruits of it all. From the usual “mahal ko kayo (I love you)” and “salamat (Thank you)”, the septet expanded their Filipino vocabulary to “lakasan nyo pa (louder)”, “lahat tayo sumigaw (all of us scream)”, among others.

BTS did not also limit their Filipino ments with one-liners but went on to deliver much of their talk in the local language like Jungkook’s “Gusto ko madalas tayong magkita. Wag ninyong kalimutan na lagi tayong magkasama kahit malayo tayo.” (I want us to meet more often. Don’t forget that we are always together even if we’re faraway)

The effort was sincerely appreciated, Bangtan. But we can’t help but give the throne to the “Best Filipino line ever delivered by a K-Pop artist” to Jin with his “Gigil nyo si ako” (Gigil does not have a direct English translation but it can mean having the uncontrollable urge to squeeze something cute.)

"philippine ARMY! gigil niyo si acoe!" jin got flustered when he forgot what to say so we started chanting his name #BTSWingsTourManila pic.twitter.com/0hHyfmmO31

V, on the one hand, is our “Best Filipino Speaker”. As fans said, he keeps getting better and can pass a Filipino with his fluency in the language.

TAEHYUNG LOOKS SO SERIOUS AND CUTE AT THE SAME TIME WHILE SPEAKING TAGALOG ?? #BTSWingsTourInManila pic.twitter.com/yCV7DyWLPr

Yes, they are charismatic performers who slay every stage they are on. But they are also fun-filled bunch who create “spring day” with their cuteness and adorableness.

From Suga, V, Jungkook and Rap Monster pretending to walk out the stage after delivering some cheesy ments to a little dance showdown the septet had between talk, we saw it all.

The compilation of "walk out BTS" scene lol what's wrong with them hahaha#BTSWINGSTourInManilaDay2 pic.twitter.com/TWAvlXzkoC

Adding to the list of “BTS’s Extra Moments” is J-Hope’s mini flying show and “dialogue” with ARMYs – with “Pak pak ganern ganern”. Jin also had a mini “magic” show for Philippine ARMYs where he took a paper from his pocket to reveal a “Mahal kita” written on it.

HE FINALLY REMEMBERED HIS SPEACH AND EVEN WROTE "MAHAL KITA".
ISTG JIN, YOU'RE AN ANGEL#BTSWINGSTourInManilaDay2 pic.twitter.com/JFBw2mKD2W

Aside from being jealous of the floor during their I NEED U stage, we bet fans wanted to be cameramen for once after BTS ogled the cameras and showered them with kisses and hearts.

V also showed ARMYs what a true visual is with his funny and meme-worthy expressions.

And we need a constant reminder that Jin is the oldest member of BTS after seeing him go all dorky with a J-Hope mask and a Jungkook derp photo (If you are wondering why Jungkook posted a selfie along with a Jin derp photo, this is why.)

Since Jin used a Jungkook's derp photo, Jungkook made his revenge by tweeting the same #BTSBBMAs pic.twitter.com/tZ5QUUUU5U

ARMYs have shown a lot of times how capable they are as a fandom in giving BTS special memories to treasure. They are dominating the voting for Billboard Music Awards with over 100 million votes, and since the septet’s arrival in Manila on May 1, they took over Twitter with #MabuhayBTS.

Aside from creating social media buzz for their beloved idols, Philippine ARMYs also donned several fan projects to make WINGS TOUR in Manila the most beautiful moment of the boys’ lives.

They also sang along to the group’s songs tirelessly, including 2! 3! from ‘Wings’ album. There were also constant fan chants and cheers that never died down in the whole two and a half hours of the concert.

Thumbs up to ARMYs. As J-Hope said, you are truly BTS’s pakpak (wings).

The fan chant and ocean during dul set. I was crying when I took this video. We love you @BTS_twt. #BTSWingsTourInManila #WINGSTourInManila pic.twitter.com/w33f7IPI8s

It is difficult to admit and feelings may still be lingering – for May 6 and 7 were days of everything beautiful and fun. From group performances that heat up the arena, on fire solo stages, to fun memories of Filipino words, dorkiness and unity in the fandom, there is no denying that the Manila leg of ‘2017 BTS LIVE TRILOGY EPISODE Ⅲ THE WINGS TOUR‘ was LIT!

A special thank to PULP Live World for the invitation to the second day of the concert. Photos and embedded images in this article belong to their rightful owners.