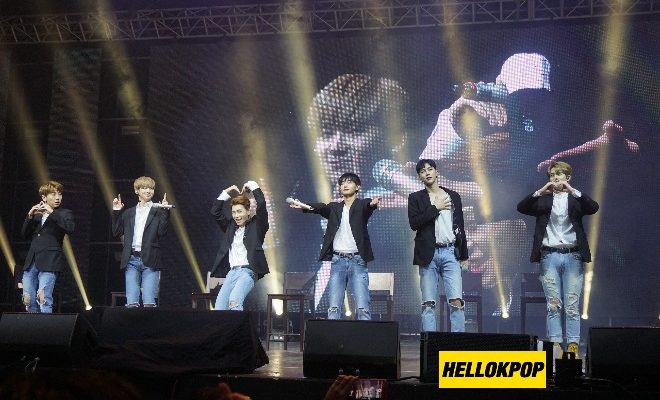 We are still high from JBJ 1st Fan Meeting in Manila “Come True”!

2018 is only beginning — merely traversing its third week, but the new year is already making Philippine K-Pop fans’ wishes come true with K-Pop events in the archipelago!

On January 14 at the KIA Theatre, another fandom’s dreams came true as idol miracle group JBJ held its first ever fan meeting and the last stop of its tour in Manila. 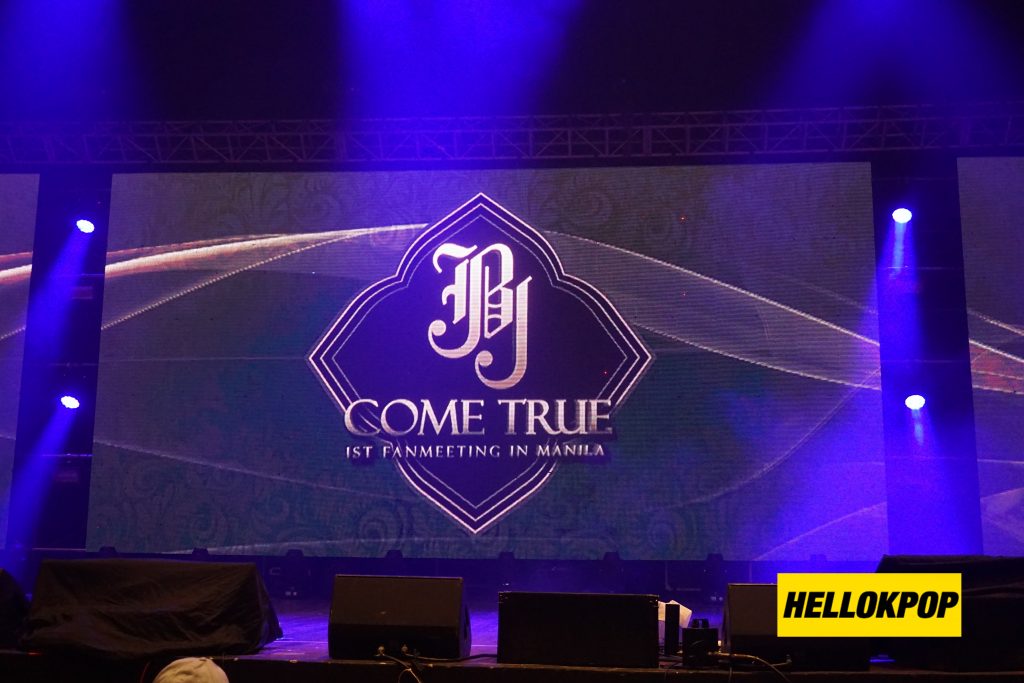 JBJ 1st Fan Meeting in Manila “Come True” was true to its name as the night gave fans the opportunity to strike off some wishes on their Joyful bucket list.

We understand the euphoria, and so we list down seven dreams that came true at JBJ 1st Fan Meeting in Manila “Come True”.

You are kidding yourself if seeing your favorite idol in flesh is not one of your life goals as a fan. It’s every fan’s wish to see (even just once), breath the same air (no matter how polluted it can be), and walk on the same land (even if it’s kilometers away) as your K-Pop idol.

All Access Production and HM Entertainment heard Philippine Joyfuls’ ardent pleas and brought the six-member K-Pop boy group in the Philippines for a fun-filled and intimate fan meeting.

JBJ is here for the last stop of their tour! #JBJCOMETRUEinMNL pic.twitter.com/m89DBFXJcr

No Tae Hyun, Takada Kenta, Kim Sang Gyun, Kim Yong Guk, Kwon Hyun Bin, and Kim Dong Han definitely made every sweat, tears, penny, and effort of fans worth it as they did not hold back in their performances, charms, and smiles. 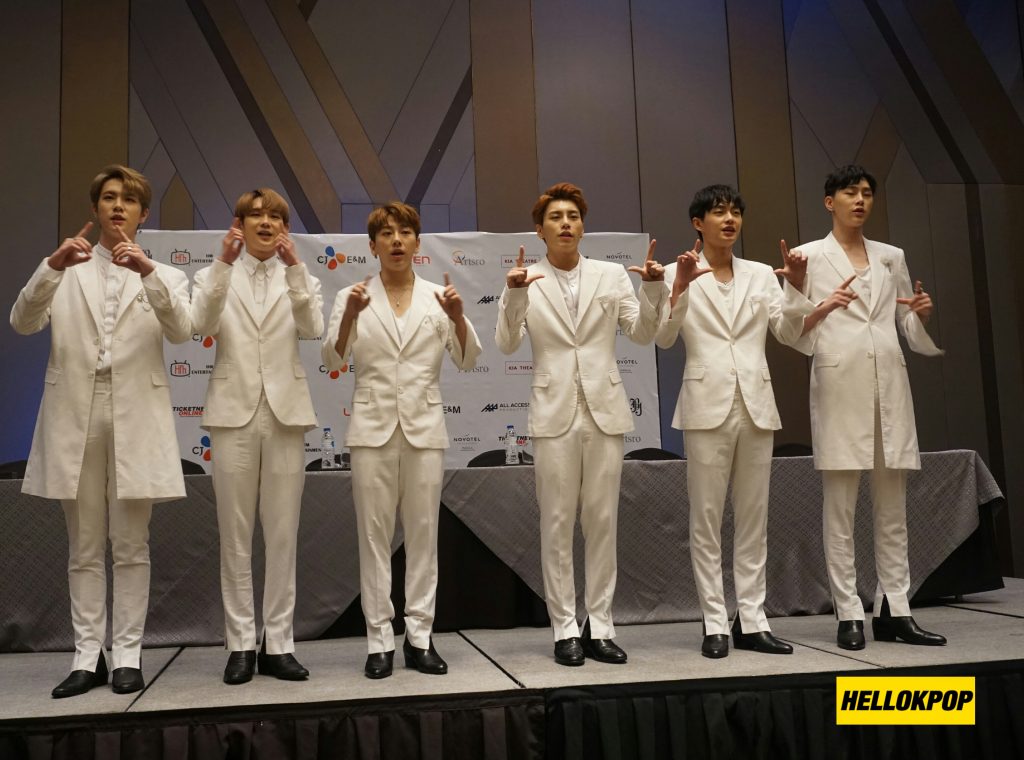 It was raining hearts and smiles from the boys that Philippine Joyfuls are more than happy to be drenched with.

Dream #2: From “J.B.J Intro” to “Pretty”! Full live performances at its best!

The second season of Produce 101 introduced so many gems to the K-Pop world that it is heartbreaking to only have 11 out of 101 to debut. Dubbed as an idol miracle group, JBJ was created by fans’ passion and efforts to bring the six members together. Thus in October 2017, Tae Hyun, Kenta, Sang Gyun, Yong Guk, Hyun Bin, and Dong Han officially began their idol career. 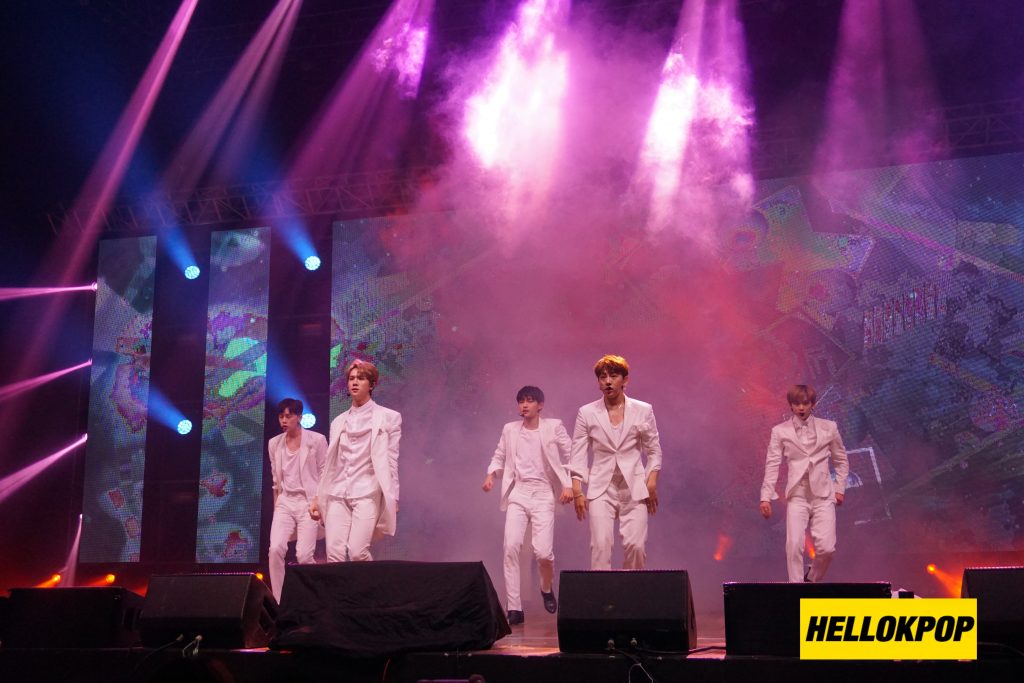 They released their debut album Fantasy, which consisted six tracks — songs that Philippine Joyfuls were fortunate to witness live! Clad in white suits, JBJ opened the show with “J.B.J Intro”, “Fantasy”, and “Ride With Me”.

The members also blessed us with fun as they sang and danced to “Pretty”. They got everyone say their name loudly (a.k.a scream), with “Say the Name” and capped off the night with “As If In A Dream”.

Admit it, JBJ in black suit with mics singing “As If In A Dream” was so beautiful to watch that we forgot for a while that it signaled the end.

No matter how much we hated Mnet and cried our hearts out when a trainee got cut off from the show, we can’t deny that we are thankful Produce 101 Season 2 happened and introduced us to now – JBJ. 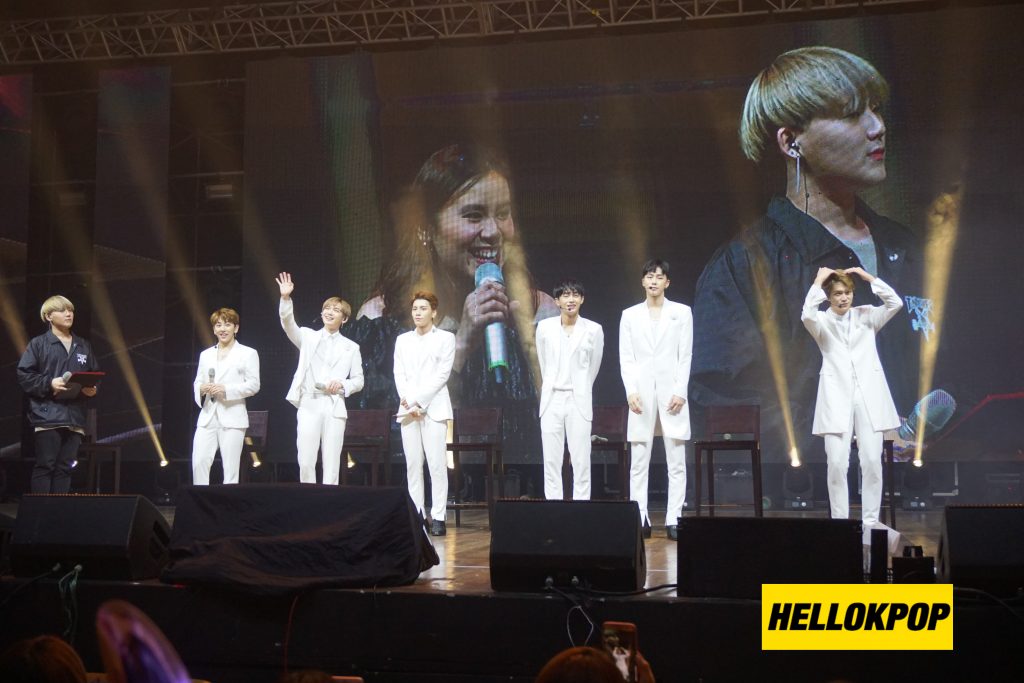 We got all nostalgic when the rest of JBJ members joined Tae Hyun and Dong Han in performing Ed Sheeran’s “Shape of You”. They pierced our heart with bittersweet memories as they performed their stages from Produce 101 such as “Open Up”, “Show Time”, and “I Know You Know.”

Here's full #JBJ "Shape of You" dance cover at #JBJCOMETRUEinMNL!  Yep, definitely on point for the boys!

If you see JBJ perform Sunmi’s “Gashina” live, we doubt that you’ll even think about leaving the fandom. It was really fun to watch. In fact, we were grinning the whole time because it was too adorable.

From Tae Hyun’s crazy choreography, to Sang Gyun, Yong Guk, and Hyun Bin’s unsure moves, to Kenta’s on-point slick dance, it was one of the highlights of the night.

Aside from Sunmi’s song, JBJ also danced to BTS’ “Fire” and Twice’s “TT”.

Dream #5: Games and The Best Punishment in the World: Aegyo

JBJ also tested its team work through a game that tested how like-minded the members are. Although they never succeeded in doing similar poses for any of the presented keyword, it was a chance to see the creativity of the group. 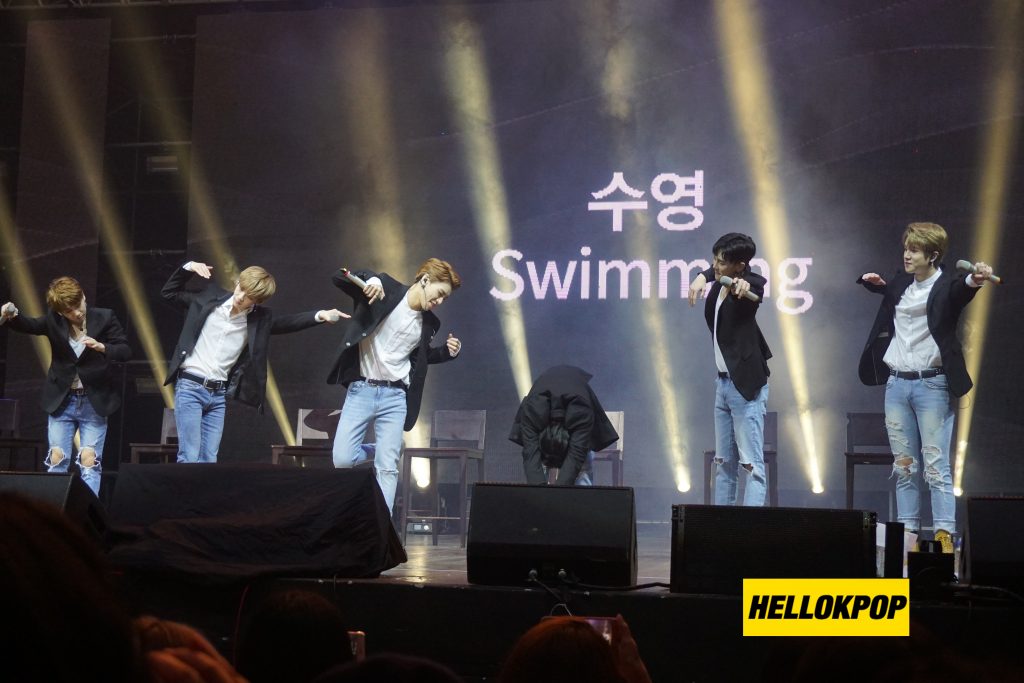 They posed for Superman, swimming, fried rice (Sang Gyun’s “unique” pose earned him a point much to the surprise of Kenta), and Kim Dong Han.

#JBJ all smiles and grateful for the support of Joyfuls. #JBJCOMETRUEinMNL pic.twitter.com/1RLEEo1BzO

The maknae was definitely on top as he emerged the top scorer in the two games they played: the random play dance of their seniors’ songs and similar poses.

Sadly for Yong Guk (but lucky for Philippine Joyfuls), he lost the game and had to do a punishment — aegyo to the tune of “Oppaya”. The idol was hesitant, but delivered a squeal-worthy cuteness for the fans. And did we already mentioned that Philippine Joyfuls were lucky? Because Kenta and Sang Gyun also did “Oppaya” due to fans’ request.

Kenta, Sanggyun, and Yongguk were cuties as they don their best aegyo for fans at #JBJCOMETRUEinMNL pic.twitter.com/dnCDxwwMbR

Dream #6: Stories and Photo with The Boys

Aside from gifting fans with performances, cuteness, dance covers, and nostalgia, the members also shared stories about their debut, album, stay in the Philippines, meeting Philippine Joyfuls, and comeback album in the next few days.

All of the members sans Hyun Bin marked their first visit in the Philippines through the fan meeting event. On the one hand, Hyun Bin shared that he has been to the Philippines with his family when he was nine years old. Although he does not have a detailed recollection of that time, he remembered having so much fun.

If given more time in the country, Dong Han said that he will go to the beaches which the Philippines is known. Kenta, for his part, will try halo-halo, a Filipino desert almost similar to Korea’s patbingsu.

As a remembrance of their stay in the Philippines and a night with their local fans, the members took a group photo with the audience. Lucky fans also got the opportunity to hi-touch, get signed photos, and Instax with JBJ.

But of course, fans would never let the chance pass by without relaying their love for the boy group. Philippine Joyfuls took the opportunity at the fan meeting to show JBJ how much the group means to them. They screamed, sent hearts, and watched the show with so much support for the boys.

A video presentation dedicated to the boy group was flashed on the screen. Fans also raised banners with a sweet message to JBJ — “Let’s continue to shine brightly, JBJ.”

They also celebrated the group’s first fan meeting, and the last stop of the tour with a cake.

Six boys, seven dreams, thousands of fans, and one night. Time flew by so fast at the KIA Theatre on January 14. It was bittersweet, but it was still a night when dreams came true for Philippine Joyfuls and JBJ.

Enjoy these photos from the fan meeting below as we await for JBJ’s return with True Colors and (fingers-crossed) in the Philippines too! 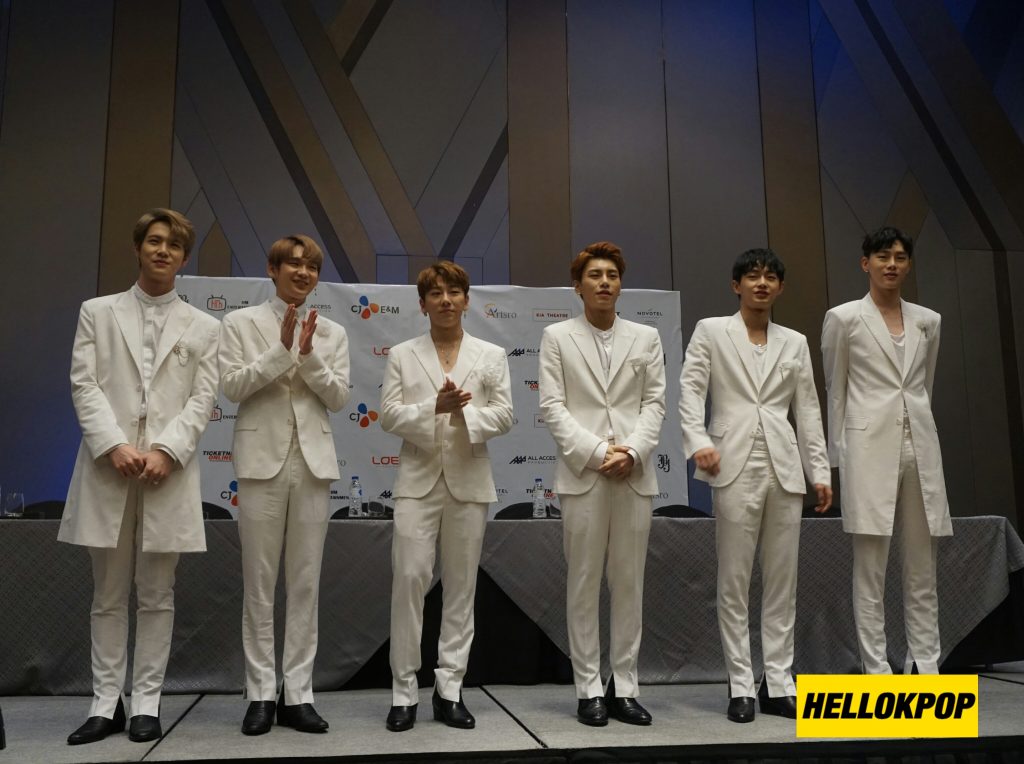 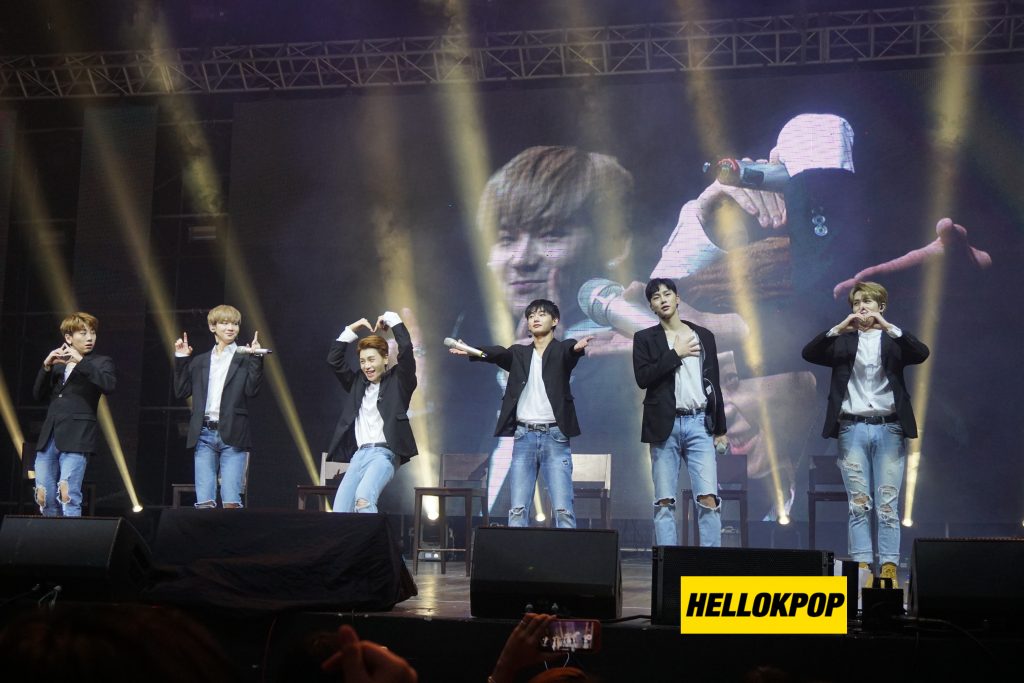 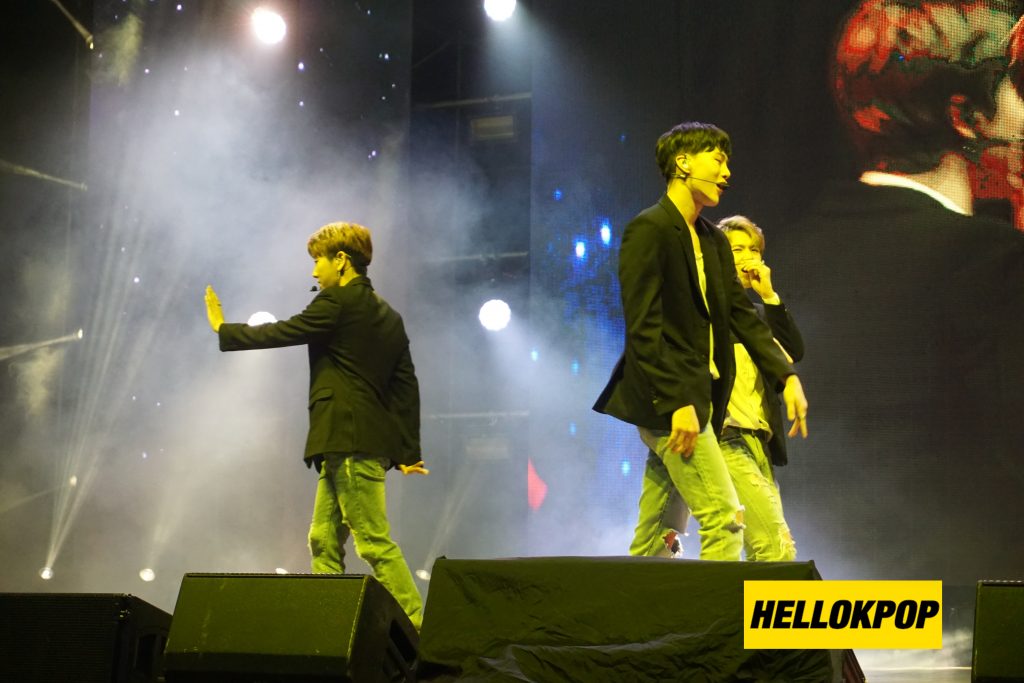 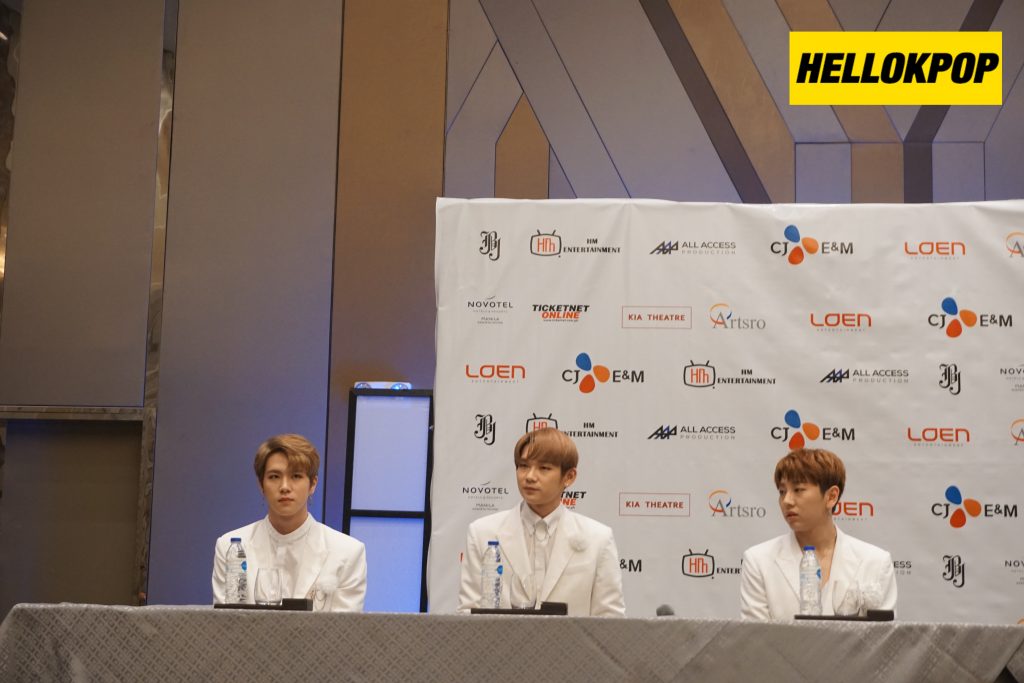 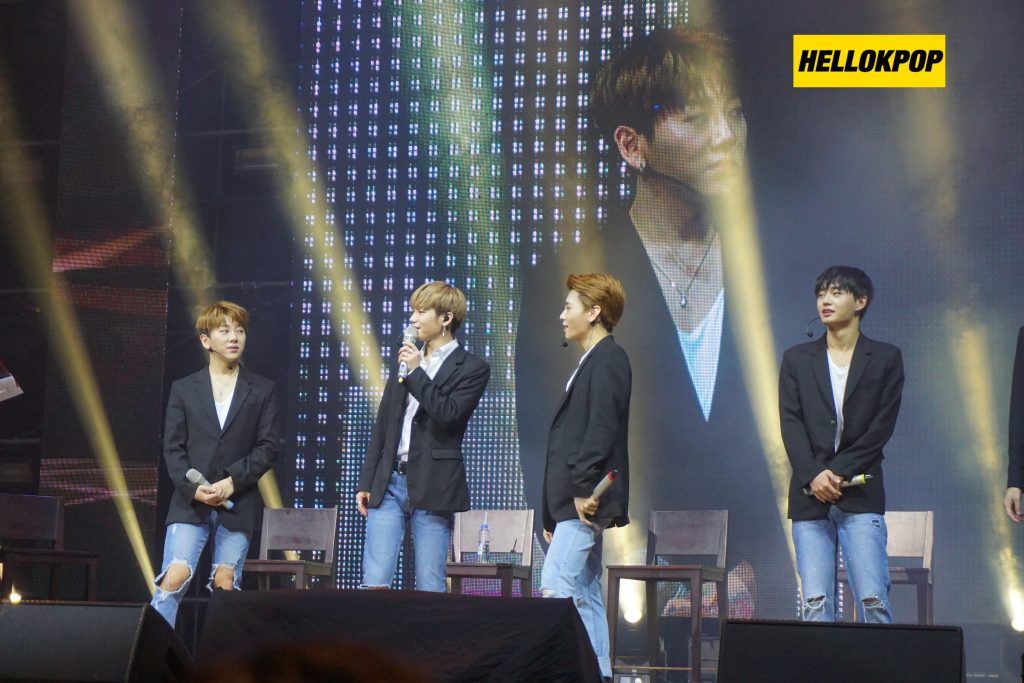 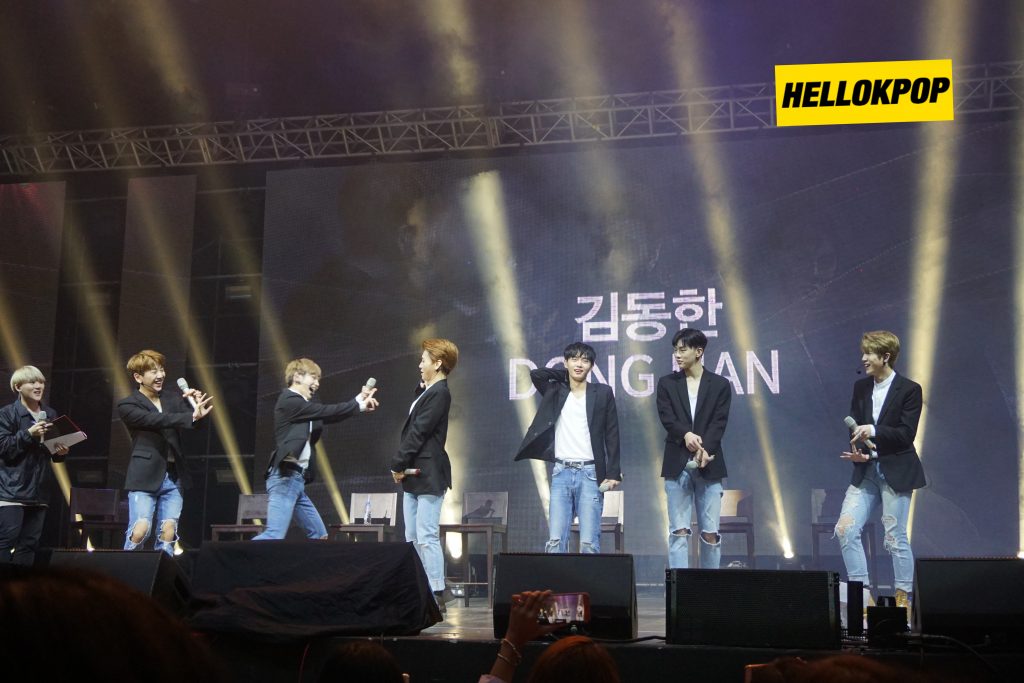 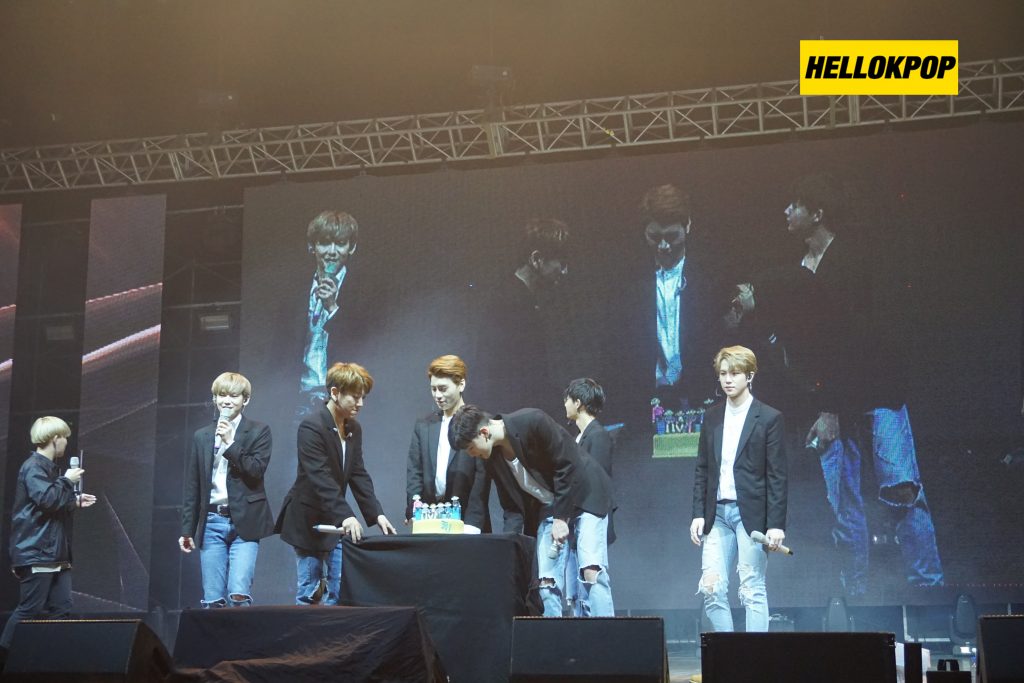 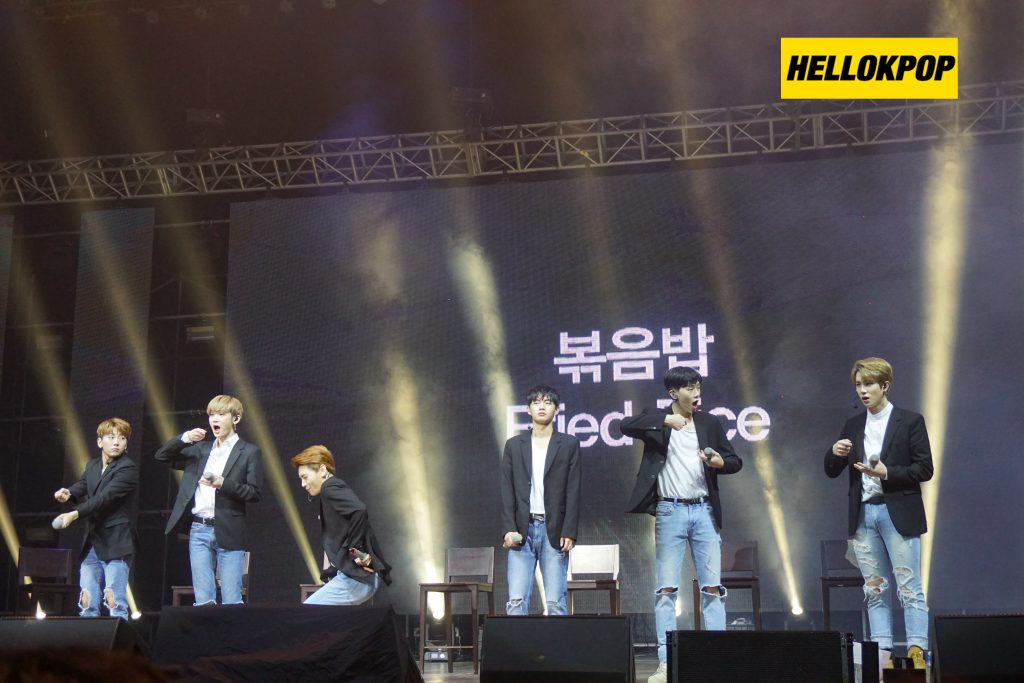 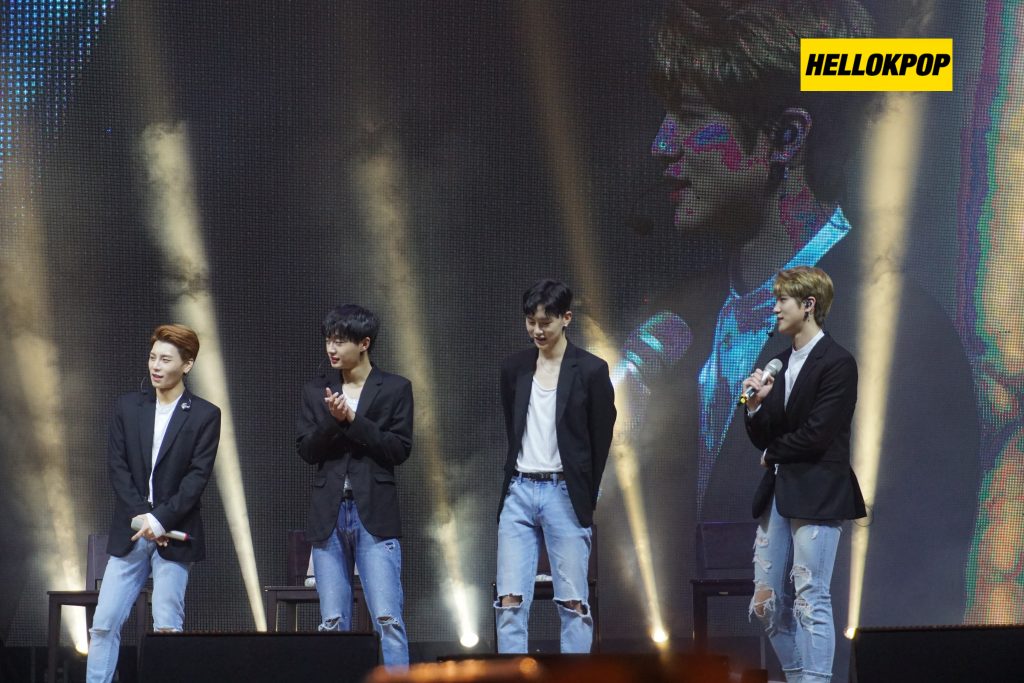 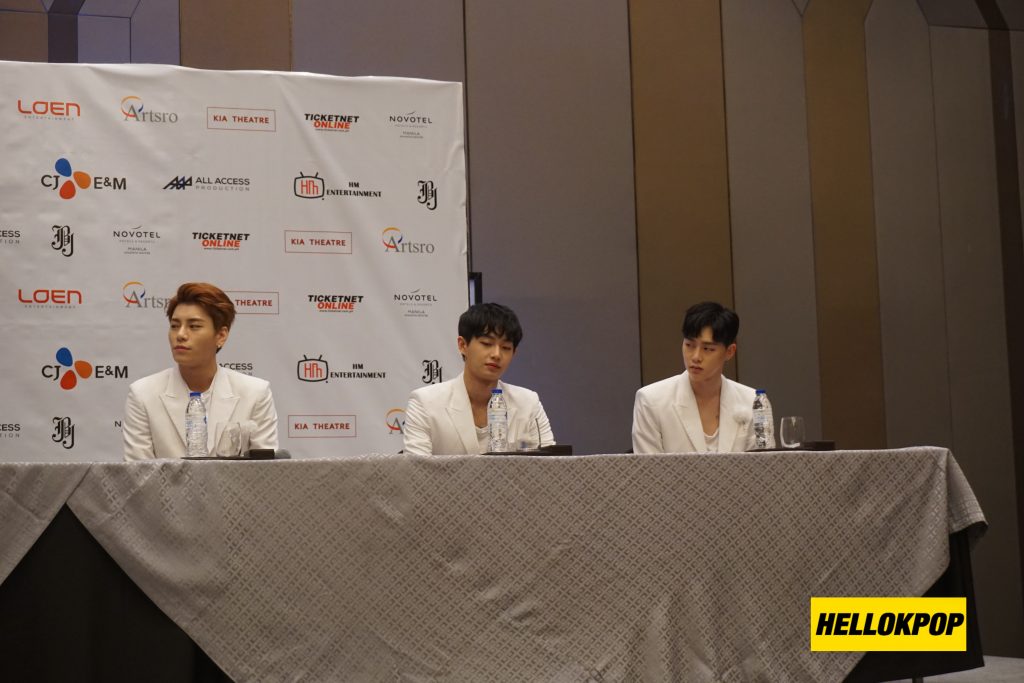 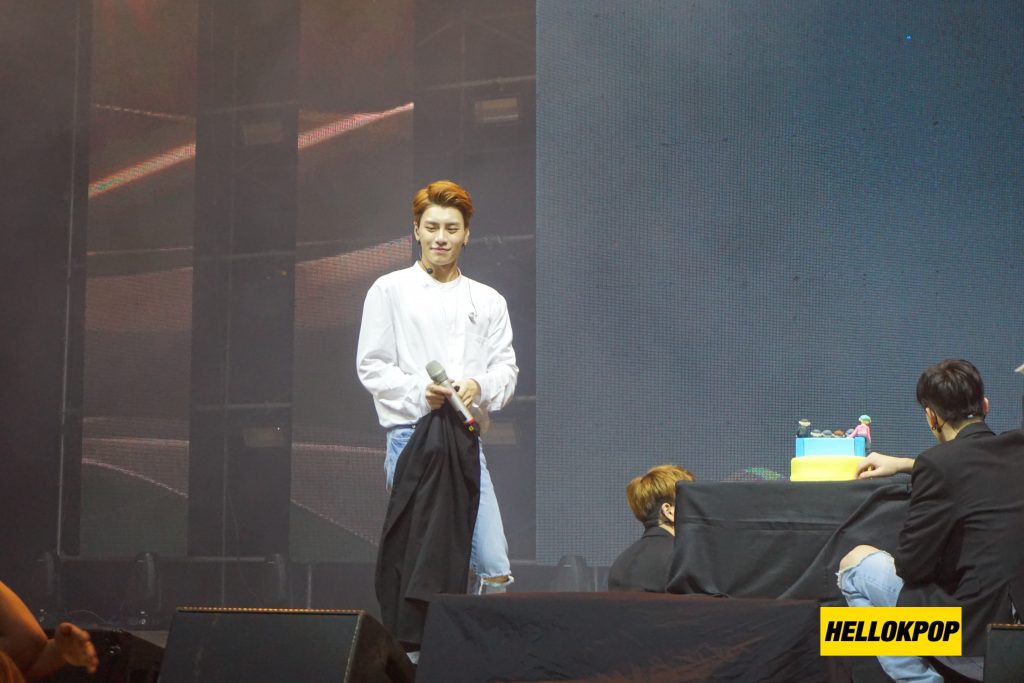 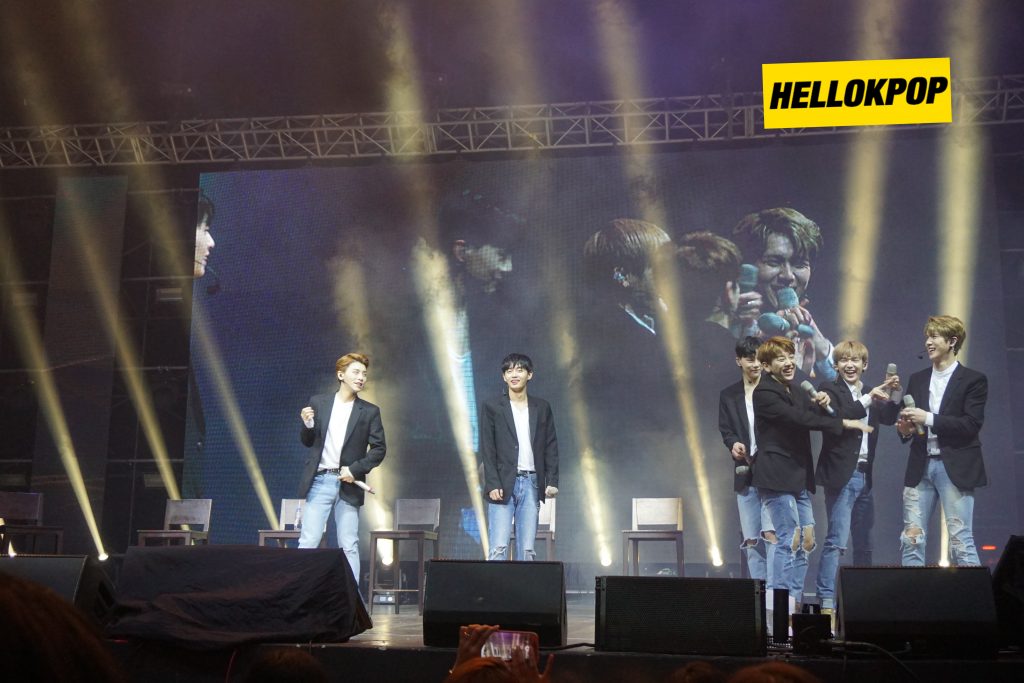 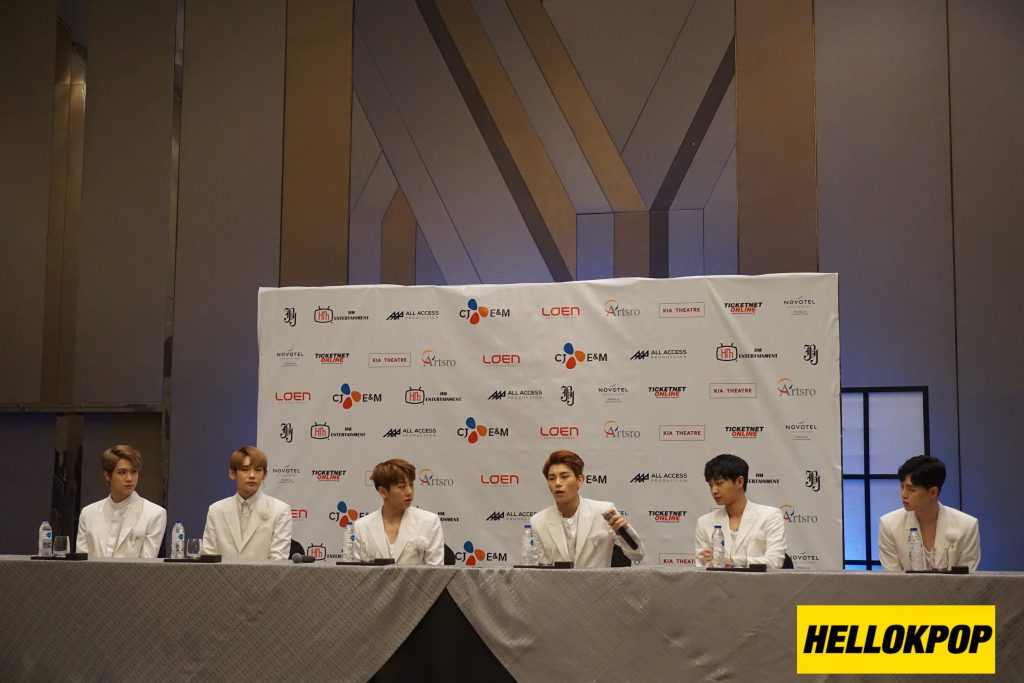 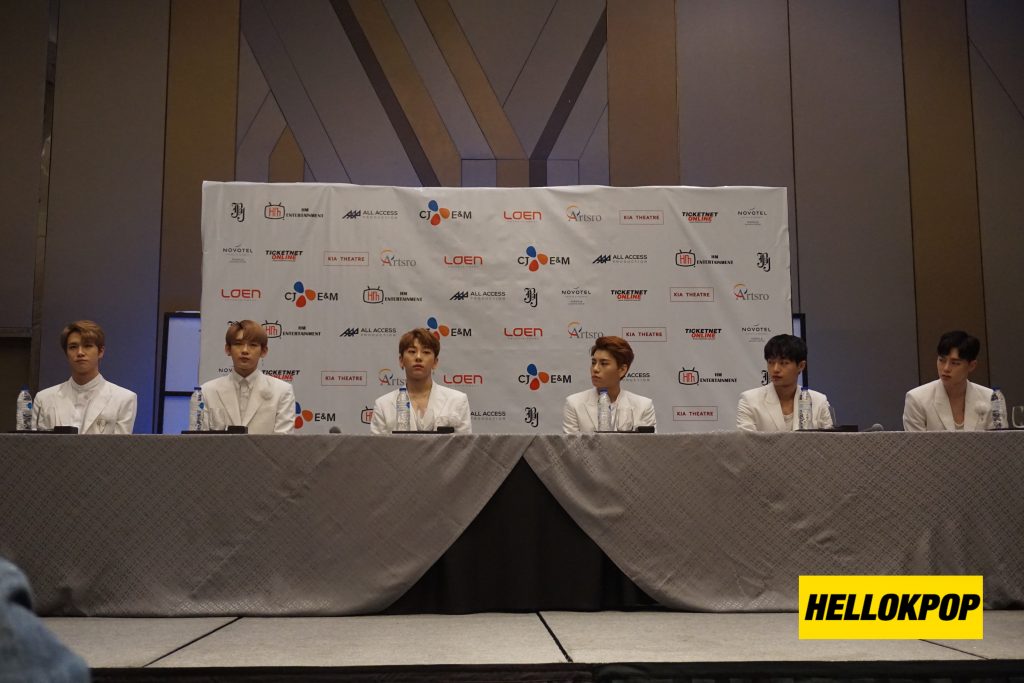 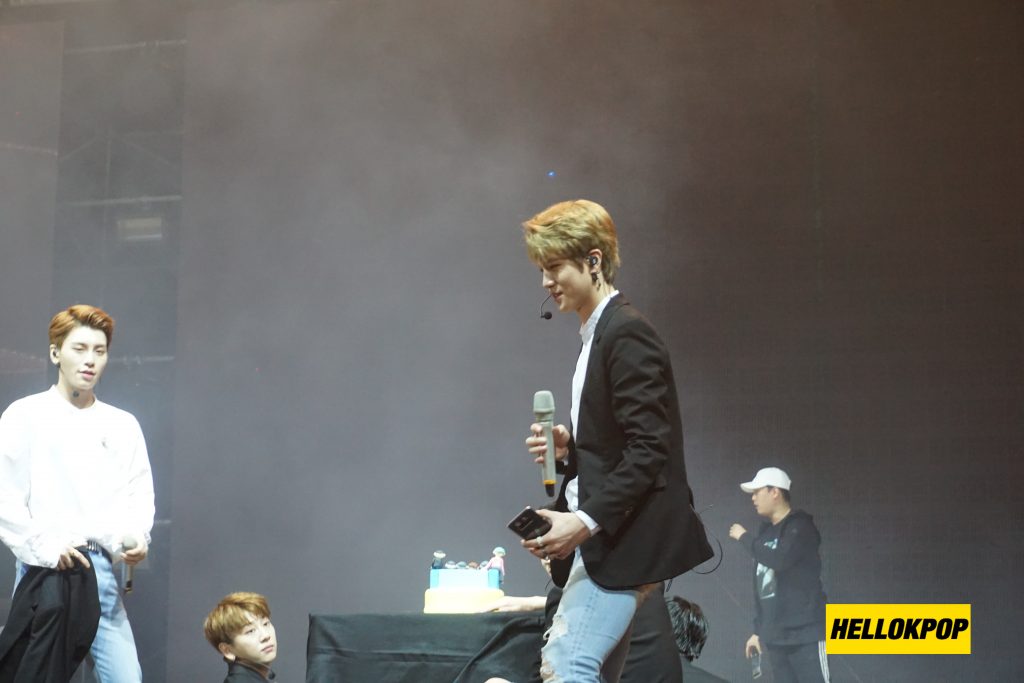 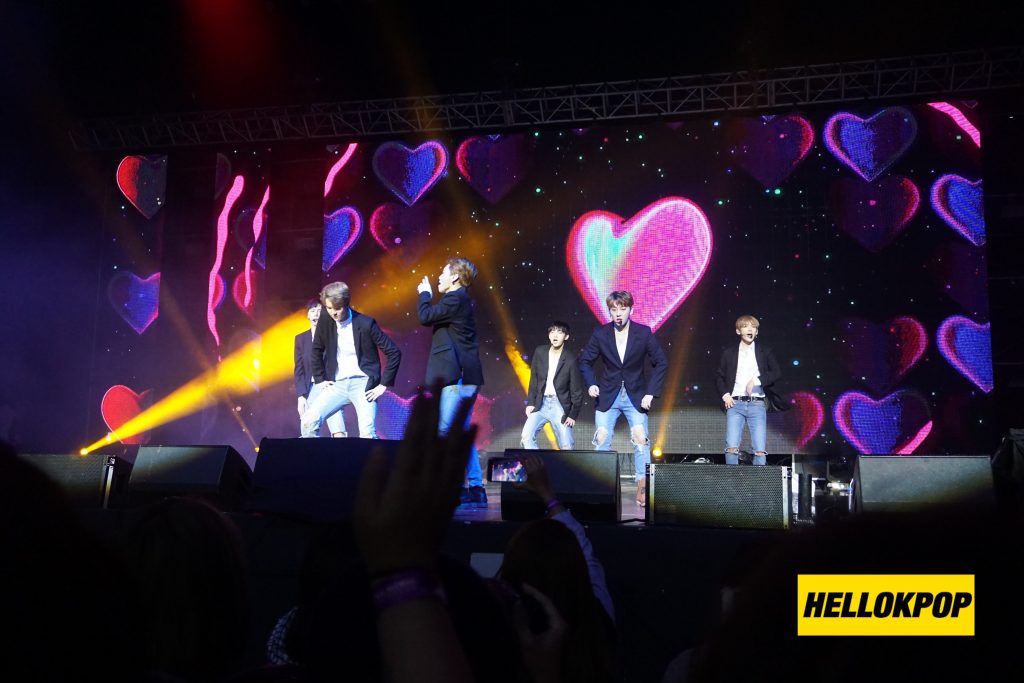 Hellokpop would like to extend its gratitude to All Access Production for the invitation to the press conference and fan meeting.