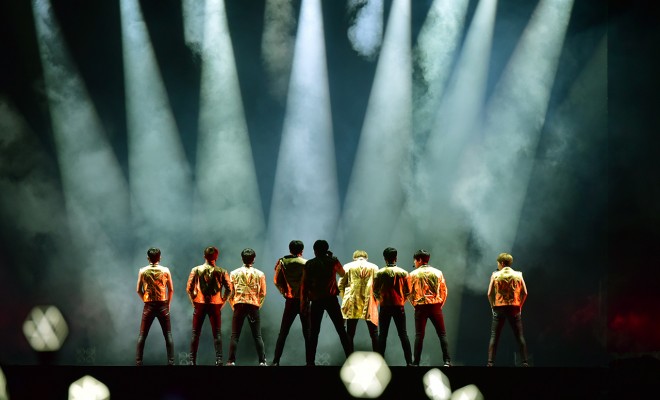 It Is A Dream Come True For EXO Fans In Malaysia

EXO’s visit to Malaysia is like a dream come true for Malaysian EXO-Ls.

After three years of longing, the eight EXO members; Xiumin, Suho, Baekhyun, Chen, Chanyeol, D.O, Kai and Sehun, landed in Malaysia from South Korea a day before the concert, while Lay flew in from Shanghai in the morning. The stars were in the country for ‘EXOPLANET #2 – The EXO’luXion’ on March 12, as their last overseas stop before wrapping up at Olympic Gymnastics Arena, Seoul from 18th to 20th.

It was definitely long but worthwhile to all fans, who had always wanted to witness their idols’ live performances. In fact, the boys were back for the third time, but only this time, it would be totally different. It was their first solo concert, where the entire stage completely belonged to them. 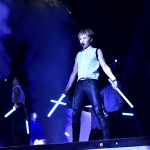 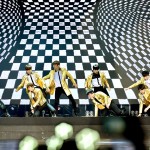 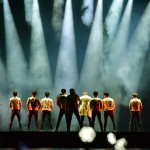 Sexy back for History 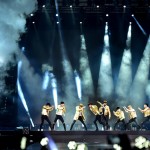 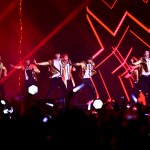 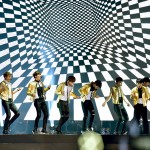 Despite the unpredictable weather and slightly messy queue before the concert, it did not put out the burning passion of excited fans. In the midst of loud chanting from EXO-Ls, EXO kicked off the concert with three opening tracks continuously, namely Overdose, History and El Dorado. Right after that, Xiumin returned to the stage due to an undisclosed problem, but quickly joined back the group on the extended stage to greet the audience individually.

Chen elevated his tone sharply, as he introduced himself with basic Malay language phrase: “Selamat Datang (Welcome), I am Chen!” Baekhyun followed suit, raising his tone with “Annyeonghaseyooooooooo.” Leader Suho then took the mic to express their excitement to be able to perform in the country again, praising the beautiful scenery too.

Read: Quiz – Which EXO Member Will Be Your Future Husband?

Moving on, the next set of performance might seem to be tiring for the boys, as they were caught up with seven consecutive songs (Don’t Go, Play Boy, Baby Don’t Cry, My Answer, My Turn To Cry, Star, Exodus, Hurt), with only two short videos in between. But the boys displayed their incredibly energetic spirit. The two dancers; Kai and Sehun, showcased their graceful moves on a bed of water during their solo time for the last half of Baby Don’t Cry. The stage became fascinating, when the light shone from the back and onto the two water-soaked members, creating a monochrome silhouette image on the camera. Vocalists Baekhyun, D.O and Suho came back for their trio moments of My Answer, which instantly calmed the atmosphere to a new level of appreciation.

After the video screening, the boys returned, donned in maroon collar tops and adorable little red hair with two ears, as they prepared themselves for the next performance of the following hits; Peter Pan, XOXO, Lucky (Chinese version) and 3,6,5. The cuteness of the boys was totally at the peak. During ‘Chanyeol time’ in Peter Pan, he would mischievously disturb the boys when they were not allowed to move.  For instance, he would playfully lift up members’ shirts, or make them peck on each other’s cheek. There was a time when he put Suho and Chen’s hands together, and tried to make them kiss.

In English, Suho asked: “Are you having a good time Malaysia? Me too! We are so happy to sing here in Malaysia!” Chanyeol expressed that he was happy to be here, and it was his first time sweating so much.

Next, the boys brought out their best festive spirits with their very own Christmas songs; Christmas Day, First Snow and Miracles in December (Chinese). Suho explained: “Since we cannot spend time with you all in Christmas, we turned here to a Christmas party now”, much to the delight of fans. 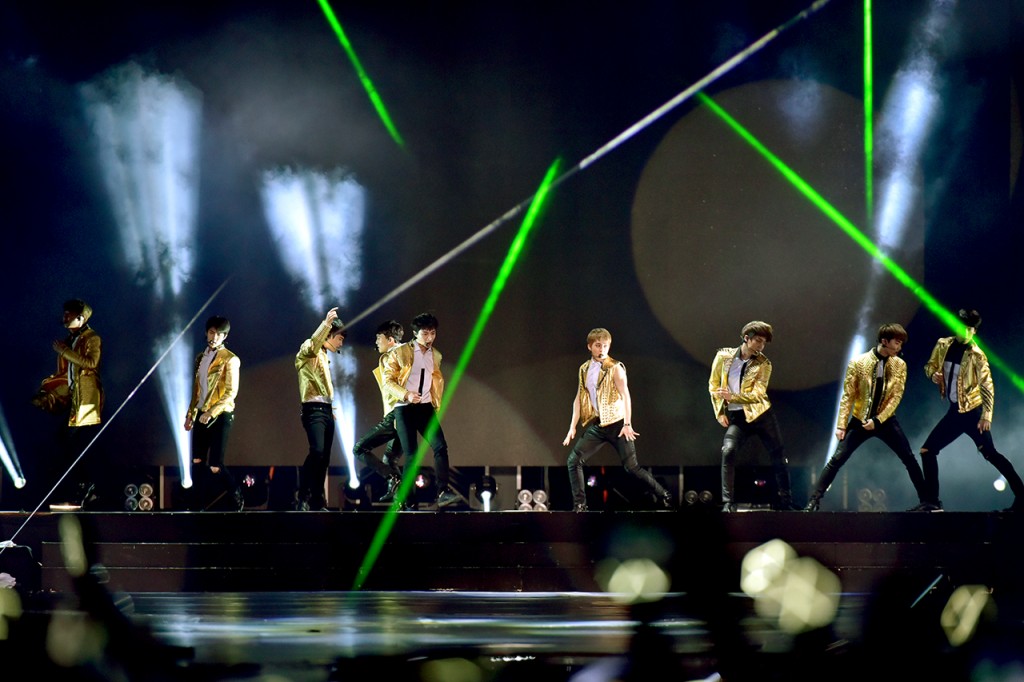 The boys were now ready to turn up the heat again, with five upbeat tracks; Full Moon, Machine, Drop That, Let Out The Beat and Run. Chanyeol requested the fans to stand up and participate with them by jumping. He also took the lead to demonstrate how fans should jump for these few songs.

Following on, the performance was all on the remarkable hit tracks from EXO; Call Me Baby, Growl (Chinese version) and MAMA, which drew fans to sing along enthusiastically.

In between Growl and MAMA, it was another round of chit-chat session. Suho said that they were going back to Seoul, and asked fans if they had to attend school tomorrow. To which, fans replied with a big “No”. And he loudly wished that he could bring them all to Seoul together. “No matter how hot the weather is, we are happy to be with you guys and we wish to take all of you to Seoul”, Chen added.

Suho introduced the next stage, and referred it as the last song for the night. The artists put up another explosive stage with the chart-topping track Love Me Right. The repackaged album of the same title previously landed a spot right on Billboard’s World Albums Chart. 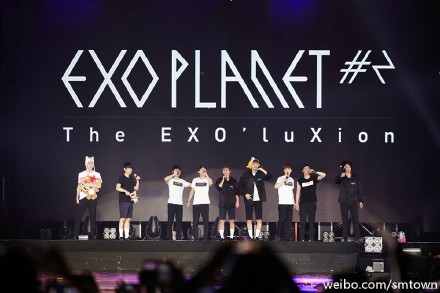 Just after a short while, the boys returned to the stage for the first encore song. This track was released in December 2015, titled Sing For You in Korean version. As part of the fan project by the loyal fans, EXO-Ls raised up the white banners up high in the air. Chen noticed the thoughtful surprise, and asked in Korean: “What is written on your banner? Please show me.”

The short phrase “당당하게 너를 사랑하고있어서 행복해” (translated: we are happy to love you virtuously) was written on all the banners. This phrase immediately rang a bell in Chen’s mind, exclaiming that it was what maknae Sehun said in the past. The latter also acknowledged his quote, and asked the fans to look up on the internet for what he has said. 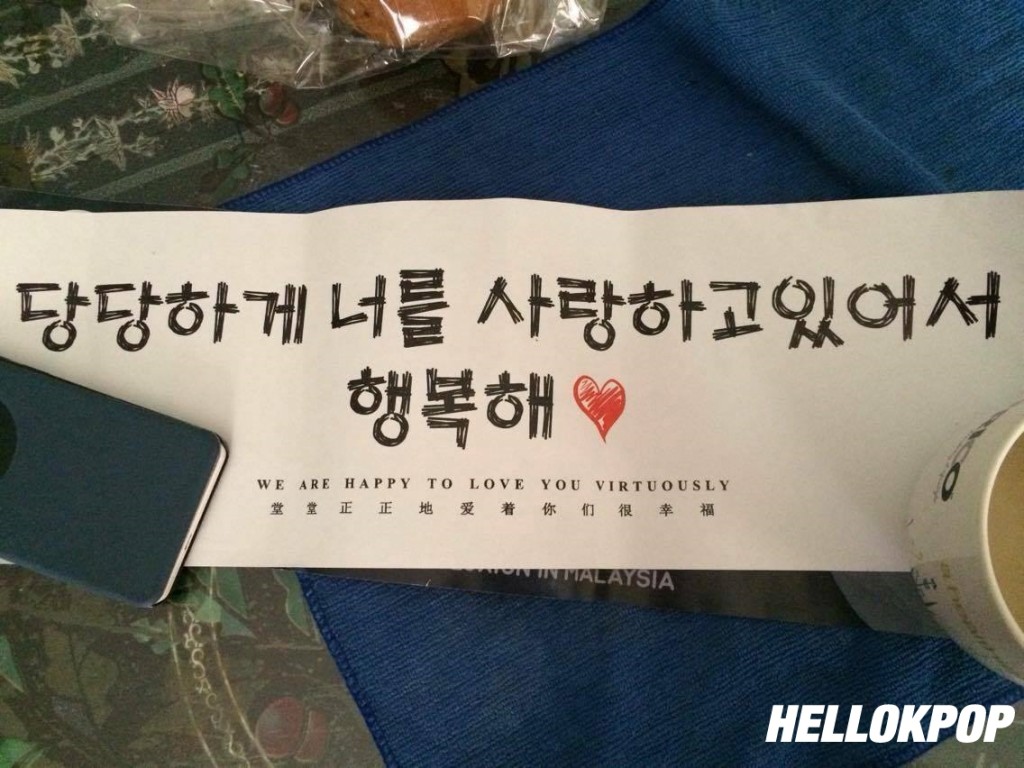 This was the banner shown to the boys!

Quickly, fans surprised EXO with another preparation – they sang a birthday song in advance for Xiumin as his birthday falls on the 26th of this month. However, the boys were initially occupied with group photo-taking with fans and did not notice it. The passionate EXO-Ls did not give up, and sang even louder for the second time. Suho was the first to notice, and was pleasantly surprised, saying that Xiumin’s birthday is still far from now. The members then took motion to celebrate his birthday with Malaysia EXO-LS, so this time, the boys and their beloved fans sang the birthday song together for Xiumin.

It was then the final song off the set list – Unfair. EXO-Ls really ‘let out the beast’, and could not restrain themselves, as they tried to get nearer to the stage to catch the final glimpse of the boys. Before EXO left the stage, Suho took the lead to reunite EXO and Malaysia EXO-Ls, with the following chant:

In total, EXO spent two and a half hours of memorable time with Malaysia EXO-Ls. The boys ended the show on a happy yet unbearable note at approximately 10.45pm.

EXOPLANET #2 – The EXO’luXion – in Malaysia was truly a significant show for the fans to remember. It was made even more special for this particular EXO-L, Lee Qiao Siew. 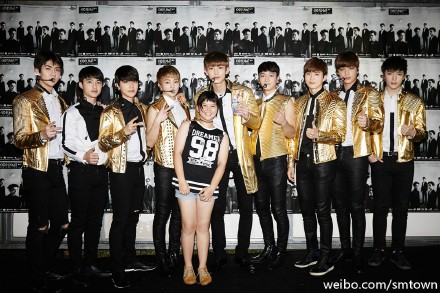 EXO and Lee took a photo together // Photo: SMTOWN Weibo

Lee (12) is a leukemia patient, who was granted the wish to meet EXO personally through the ‘Make A Wish’ Foundation, an organisation which grants the wishes of children with life-threatening medical conditions to enrich the human experience with hope, and strength and joy. It was everyone’s wish that the meeting with the members will continuously bring joy and give strength to Lee through their music and activities.

Hellokpop would like to thank organizer Star Planet for the media invite, including sponsors Spritzer Mineral Water and Robson Hill Residency for holding ‘EXOPLANET #2 – The EXO’luXion in Malaysia’.