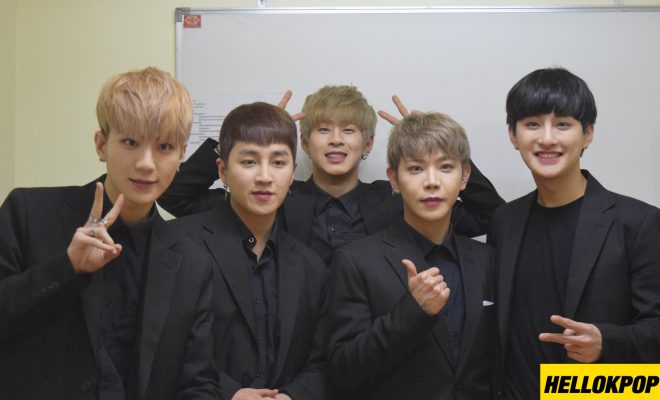 Korean boy group AxisB made February a month to look forward to as they commenced their first Philippine promotional tour this month.

Kicking off their tour, Daeyoung, Honey, Juno, Junghoon, and Doah made Valentine’s a week-long celebration for their Manila fans.

The Korean boy group set the Manila stage on fire with performances from February 14 to 17 in various venues in the region before heading to the tour’s Cebu leg.

In an exclusive interview with hellokpop, the quintet shared their strengths in comparison to other artists, comeback plans, and desires to venture into other fields other than music.

AxisB’s lead vocal Junghoon revealed that the members are active in the group’s projects and activities.

“AxisB creates its own music, choreography, and even our stage outfits,” he said.

According to him, they go into discussion, and decide on their music, choreography, and the like after conferring with each other.

AxisB debuted last September 28, 2016 under AxB Entertainment. The group’s name was derived from “axis” meaning “center” and b for “boys”, a combination that makes for the boys’ readiness and hope to be at the heart of the music industry.

The five-member group marked their entry to the music industry with their first digital single Curious. The quintet went on to release tracks like Be My Love and Stay.

Following these releases, Junghoon shared the group’s plans to release a Japanese version of Be My Love in April. The group’s anniversary month, September, will hopefully see a comeback and album release of AxisB.

Junghoon said a more manly charm will be used to compose their upcoming album, partnered with sharp choreography and attractive feel.

“The previous album had a more lovely feel, but for the upcoming one, we are planning for a more masculine and cool atmosphere,” he said.

Expansion To The Philippine Market And Other Ventures

Aside from the collaboration stages with local artists, AxisB revealed their desire to do Filipino version of their songs when the opportunity arises. The quintet also shared of being active in other fields other than music, like other idol groups.

Doah is looking to harness his knowledge in acting through participating in acting projects, while Junghoon intends to make full use of his interest in band music through production.

Juno, on the one hand, is interested in doing musicals. Daeyoung and Honey shared their desires to participate in modelling to channel their interest in fashion.

AxisB To Land In Bacolod, Iloilo And Davao

After successfully wrapping up their shows in Manila and Cebu, AxisB is set to make its way into three more cities for its Philippine promotional tour.

Bacolod will be the group’s next stop. The quintet is set to meet fans in the area on February 24 and 25. Following Bacolod, Iloilo will be the next venue for AxisB’s tour on February 26. Davao will be the Korean boy group’s last stop on March 3 and 4.

Hellokpop, as an independent Korean entertainment news website (without influence from any agency or corporation), we need your support! If you have enjoyed our work, consider to support us with a one-time or recurring donation from as low as US$5 to keep our site going! Donate securely below via Stripe, Paypal, Apple Pay or Google Wallet.
FacebookTwitter
SubscribeGoogleWhatsappPinterestDiggRedditStumbleuponVkWeiboPocketTumblrMailMeneameOdnoklassniki
Related ItemsaxisbAxisB's First Philippine Promotional TourDaeyoungDoahHoneyJunghoonJUNO
← Previous Story AxisB Makes Valentine’s Extra Special For Filipino Fans
Next Story → How Lydia Lee’s Life Has Changed After Her Viral Cover Of Adele’s “Hello” That Stormed The Internet