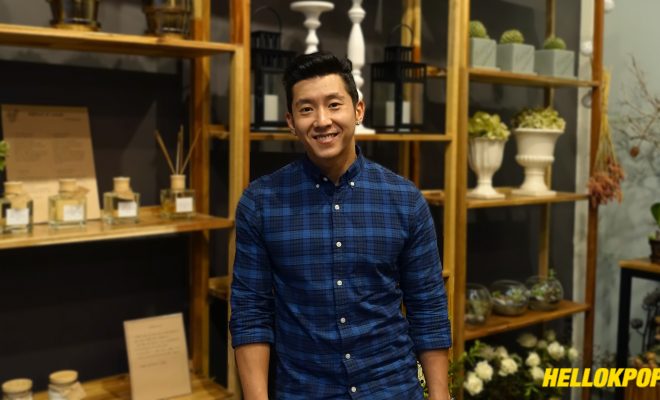 More Than Just An Entertainer: The Other Side Of Brian Joo That We Never Know

We came up with good questions that allow you to know him better. More than just an entertainer, he is Brian Joo.

Hellokpop had the opportunity to drop by Brian Joo‘s flower shop cafe in Banpo of Seoul. Prior before that, the Fly to the Sky member has kindly agreed to meet us for an exclusive interview even though it was a national holiday in Korea on that day. We discussed a lot, topics ranging about his cafe, opinions on the entertainment industry, and advice he had for aspiring artists.

I remember I first listened to Fly to the Sky’s song in the 5th grade, and had their songs on my playlist ever since. To meet and have such a deep, insightful conversation with such artist was a new experience indeed. I was surprised to how genuine and thoughtful his answers were to each question. It is no wonder after his debut over all these years, he’s still very adored by his fans from all over the world.

Brian was introduced to a lady, who worked at a flower shop called Trianon when she was about to close it. He agreed with his new acquaintance to do a partnership of opening a flower shop cafe. They moved a couple times within Seoul to find the perfect spot in Banpo. If you’re ever in Seoul check out this lovely flower shop cafe ‘Brian and Trianon’.

Brian explained the feeling that he chose the right path comes on a “daily basis”. He stated that making someone happy as an entertainer is a great feeling for him. He went on to share an example of one of his fans, who through his music, her life was changed for the better. Brian expressed how knowing that he was able to change someone’s life in that way is an amazing feeling.

“Music is a part of who I am, it’s not all of who I am.” From singing to musical performances, to owning a CrossFit gym and a flower shop cafe, Brian is known to be active in various fields. “I’m one of those people if I find something new to do, a new passion, a new hobby, I like pursing it.” He shared that he has tried so many things but he is looking to trying out acting! When asked what roles he wanted to play, he stated that the obvious answer to many people would be the goofy troublemaker of a best friend to the main character. “So on the flip side… I want to play a little bit more of a serious character.”

According to Brian, Kpop has taken a lot of risks. Despite the risks, he believed that the direction, which Kpop has taken, helps it to flourish. He also talked about how Korea and the entertainment business are being smart in using internet technologies to reach out to worldwide these days.

“Being original and staying close to the roots is important but at the same time, we’re in a world right now that everybody wants to go global. There’s so much racism the world and segregation I feel like when you bring different music, different cultures together, I feel personally that’s a good thing.” Brian expressed his opinion on collaboration between K-pop and non K-pop artists. Through such collaborations, cultures are exposed and people become acceptable to different types of music.

Brian is part of Janet Jackson’s fan club and claimed that he is her number one fan. He has learned all of her choreography, and wanted to become her back dancer when he was in her fan club back then. When asked which non K-pop artist he hoped to work with, he started with Janet Jackson. Being considerate of the younger generation, he revealed he would want to work with rappers such as Jay-Z and Kanye West.

“Oh, I love my fans!” In entertainment, many times artists say things because they know it’s what the fans want to hear. When Brian says he loves his fans, he means it. But he stressed though that there are times when he wants fans to take what he says as it is and not misinterpret certain words. “Whatever I do they’re supportive, flower shop – they buy my flowers, music – they download my music, shows – they come to the performances. For that reason, every time I see a fan I’m always touched. That might sound cliché as well but that’s the very truth.”

What’s Up Next for Brian Joo

“Going with the flow, going with not knowing what’s going to happen in the future is so much more fun and exciting with life… I like not knowing sometimes what I want to do next. New hobbies can form tomorrow, new aspirations, new connections to people… I honestly just don’t have any idea what’s going to happen in the future… Just bare with me and I’ll just do whatever I can to make you guys stick by my side to the end.”

Throughout the interview, we were able to sense his passionate and caring heart for his fans and work. We are grateful for the amount of thoughts he put into the questions. The thoroughness and sincerity in his answers helped us realize how lucky his fans are.

As we have already witnessed over the years, Brian is always active in various ways, with music, performances and running his own shops. We can definitely look forward to what he will pursue next.

Let’s cross our fingers and hope to see him in dramas or movies soon!