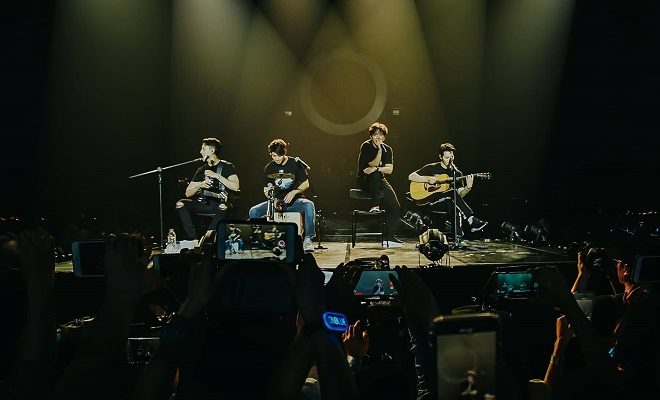 Important note To K-pop fans: The next time you hear CNBLUE is off to visit your town, BOOK IT!

CNBLUE LIVE [BETWEEN US] IN MANILA just showed how K-rock idol night is done! 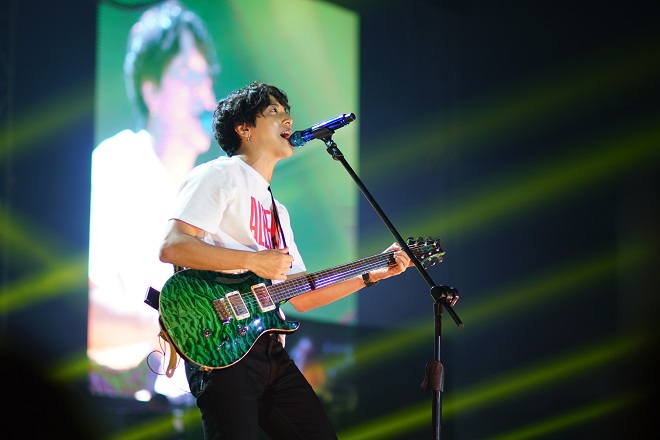 Living up to their fiery live stage reputation, CNBLUE put up a frenzied concert for their fans in the last leg of CNBLUE LIVE [BETWEEN US] IN MANILA Asia Tour. The quartet detonated electrifying-charged performances without any intention of letting the audience down.

From classic fan favorite songs along with some singles from their Japanese album, CNBLUE completes the party set with selections from their new album – Between Us.

Truly a spectacular night, we don’t need to hype how sensational CNBLUE’s rock party was. We are sharing you some of the amazing concert moment takeaways in case you have missed it!

Prepping Up To The Party

With the boys exploring the town and sharing glimpses of where and what they were up to prior to the concert, fans who had been patiently counting down were getting the best fan love ever as CNBLUE showed the same level of excitement that their wonderful fans were feeling.

On the big day, every chance they got from set breaks, they made sure to be attentive to the mammoth crowd at the concert. Generously giving kind and sweet words to their beautiful fans is one of the reasons why the band has been blessed beyond measure through the years.

CNBLUE leader Jung Yong Hwa casually roamed in the metro the day before the concert. 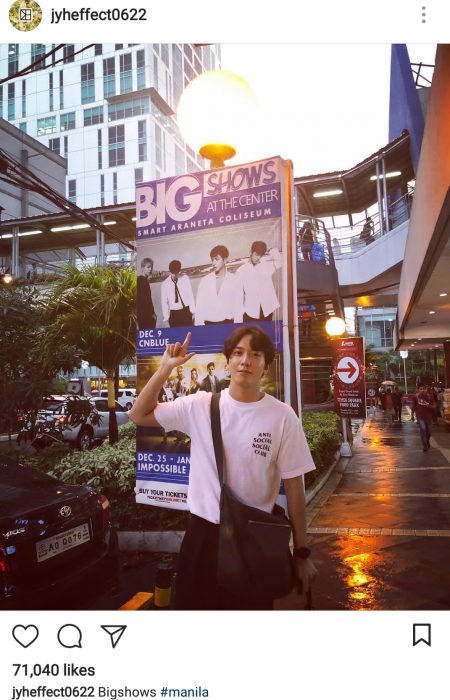 One With The Fans

Anticipating fans lauded the superbly lit stage with kickoff song “Radio”, signaling the start of the showcase. We want to emphasize the stunning stage setup, solid sounds, dazzling lights and well-coordinated program. Kudos to IME PH for bringing up an amazing platform for CNBLUE to roam freely with their fans.

Not only did the quartet take time to converse in local dialect, they also threw in hilarious blabs based on familiarizing themselves with trendy expressions in the country. “Petmalu” (awesome) and “lodi” (idol) are current popular slang words frequently used in social media to tag something or someone wonderful.

Jamming in perfect unison with the crowd for hit single “You’re So Fine”, Jung Yong Hwa knew just how to bring in the right dose of humor by declaring “I’m your lodi!” to the laughter of the crowd. The appreciative crowd in exchange pumped up Yong Hwa by cheering “lodi! lodi! lodi!”, delighting the CNBLUE frontman who shot amazing vocal spectacle with hits “Between Us”, “Can’t Stop” and more. 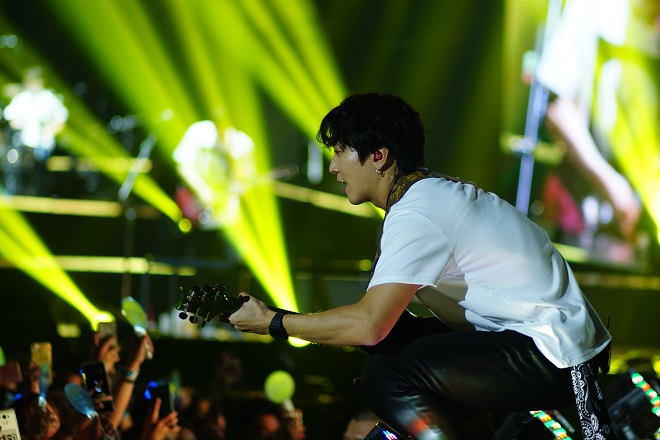 Putting Up A Solid Rock Performance

CNBLUE LIVE [BETWEEN US] IN MANILA highlights the talented band streaking songs without deflating the intensity level of each track. They sang a lot that it was almost impossible to believe where they were getting the stamina.

True to what Yong Hwa said, “Today is petmalu!” (Today is awesome!) It was a jaw-dropping spectacle how they gave their heart and soul rocking the night away to their willing fans, who jammed with them from start to finish.

Even when Lee Jung Shin blurted “Pagod na Ako.” (I am tired), pushing the crowd to giggle, hyung Yong Hwa urged him that they were just starting to party.

Drummer Kang Min Hyuk who praised the viewers for the strong energies he was feeling channeled them efficiently to climactic drum solo showcases to the cheer of his band mates and lit fans.

We sure don’t want you to miss how adorable CNBLUE was in appreciating their passionate fans.

The band revealed how happy they were to close their Asian tour while feeling the vibrant reception of their supporters. Befitting of the title as Kings of Fan Service, the audience were gifted with near-astral-blissful-projection because CNBLUE kept on igniting heart fluttering moments for fans to crave. 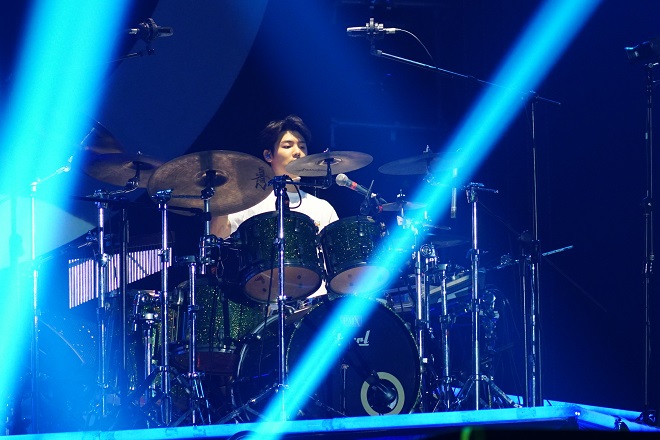 Giving Fans More Than What They Ask For

Teasing the fans that the event was done, the group came back with a laid back session where Yong Hwa sang some English song snippets. He also mimicked the sound of “Hotel California” much to the glee of the fans. Then Jong Hyun led “Love Light” featuring Jung Shin’s soothing rap and Min Hyuk’s honeyed song verses. Right at that moment, we swore we caught some male attendees behind us on a fan-boy trance. *wink

CNBLUE promised to be back soon as they were grateful to their faithful admirers after crooning in Between Us single – “Manito”. To cap off the night, they hit it with “Young Forever” as parting gift to loyal Boice aficionados in attendance, who have been with them through their music journey eight years ago till now. 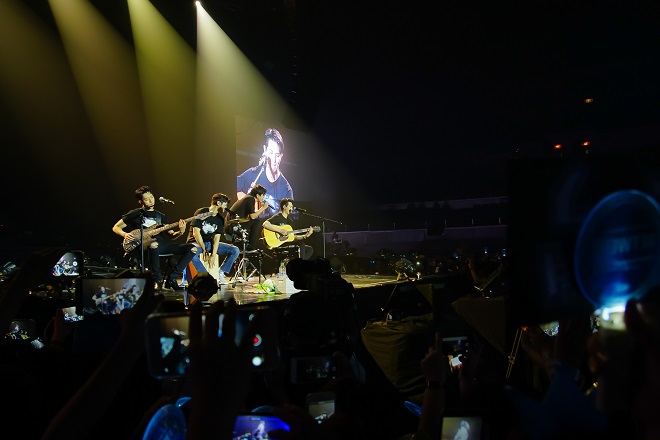 We are sure that some fans are still high, floating around somewhere in CNBLUE sphere after the electrifying meetup with their favorite band.

For CNBLUE fans, it is gratifying to see that the four gentlemen felt the same way as reflected from their heartfelt social media postings. For the boys, it is reassuring to know that they have people who will be there to cheer them as they explore their limitless musical gift.

Thank you #Manila i want to come back again. 2017 씨엔블루 아시아투어끝. 감사합니다

Thank u Manila! Thank u all! Between Us tour has finished, thank you everyone! See you at our next tour 🙂 #CNBLUE

2017 CNBLUE LIVE [BETWEEN US] IN MANILA is brought to fans by FNC Entertainment and IME Philippines.  Special thanks to IME PH for the invitation to the concert.