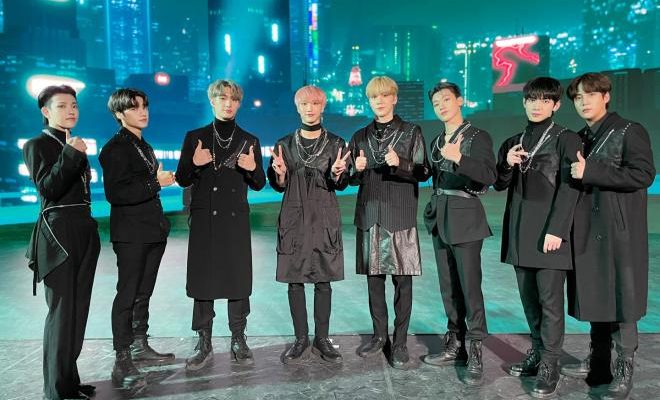 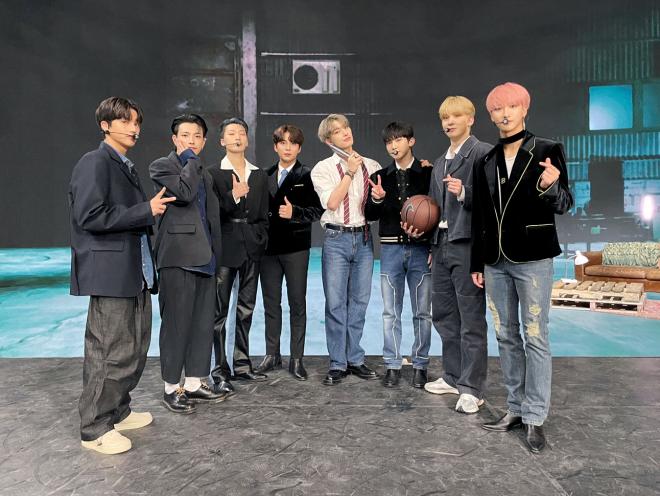 Amidst the ongoing effects of the COVID-19 pandemic, the lovely group made sure that ATINYs from all around the world would have a good time during the event. With the help of the state-of-the-art XR technology, ATEEZ was able to deliver top-tier music stages and entertaining segments. They also managed to build a more intimate relationship with their supportive fans.

Held in celebration of their praiseworthy achievements and in conclusion of the incredible Zero:Fever album series that first came out in July 2020, the virtual event took place on November 14 at exactly 3 PM KST. Revolving around the existing concepts shown in their previous releases, the boys did a great job in presenting the story behind Zero:Fever and showcasing not only their performing skills but also their acting abilities.

ATEEZ began the online music party by revealing a special VCR that features jaw-dropping visual effects. Right off the bat, the clips delivered an exciting and heart-thumping feeling. Anyone who watched it surely felt like he or she was the main character of a science fiction film. 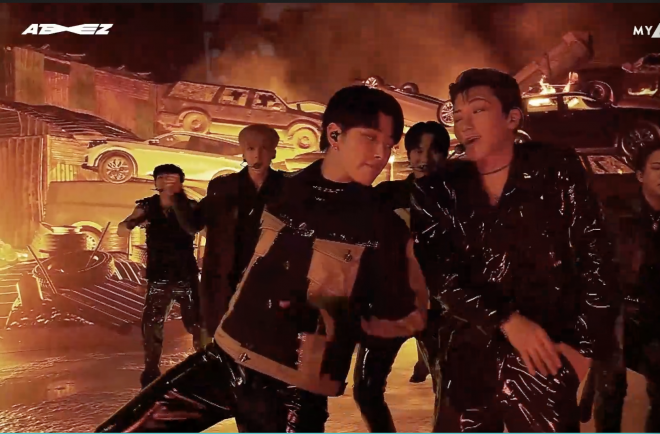 Proceeding with the concert proper, the group then appeared and immediately performed their two signature and powerful songs “Say My Name” and “HALA HALA.” Both songs came from their iconic 2019 EP Treasure EP.2: Zero to One.

To sustain the energy they built and to further increase ATINYs’ immersion, the group continued their introduction stages with their iconic tracks “THANXX” and “Inception.” While donning school-inspired ensembles, they proved through their stage presence why they deserved to be called one of the best fourth-generation groups today. 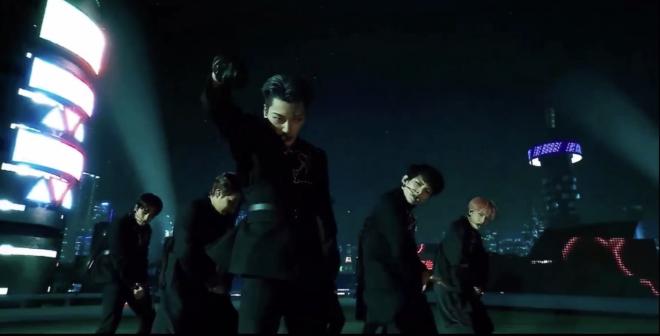 Prior to this, Hongjoong, Seonghwa, Yunho, Yeosang, San, Mingi, Wooyoung, and Jongho did a mini-acting segment first. All of the boys were bonding with each other except for Hongjoong who was busy writing something in his notebook.

A few clips that seem to explain the background behind the Fever series also graced the screens in between the intro performances.

Right after performing their hit songs, ATEEZ proceeded with performing their sultry and powerful track “Desire.” While donning beautiful black suits, all of the members impressed fans with their incredible charisma and strong stamina, given that the second part of the setlist highlights some of their newest offerings.

Another cinematic VCR then graced fans’ screens, which showed the members wearing blindfolds while acting confused and lost. When they removed the items from their faces, the guardian then appeared from a mysterious red door. Encouraging the rest of the members to escape, Hongjoong screamed “run,” while San pushed the guardian back to the door where he came from.

They followed the interesting VCR with gripping “Deja Vu” and “Fireworks (I’m The One)” performances. These are the two title songs of the second and third installment of the Zero:Fever album series.

Toning down the mood a bit, ATEEZ utilised a pick up truck to present their emotional and meaningful song “Take Me Home.” The members shone effortlessly as they showcase their dynamic voices and stage presence even while sitting. 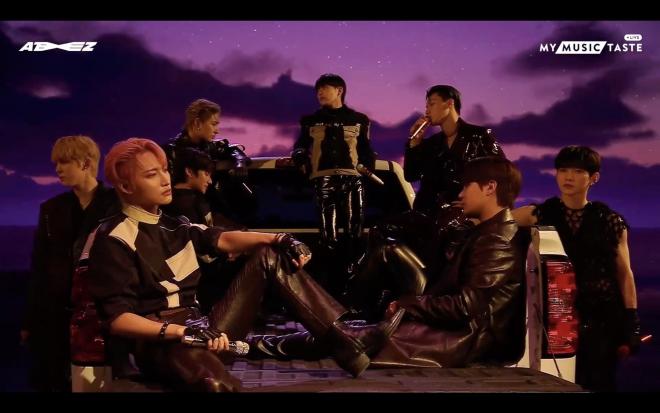 After the long but unforgettable opening, ATEEZ then introduced themselves one by one and gave their warmest greetings to their worldwide fans. You can see how happy and thankful they are right from the very start, making the event more remarkable.

They also shared their thoughts on the VCR they made just for the show. Hongjoong said that the FEVER series portrays their different image. They wanted to highlight all of the important parts of the era in the concert that is why they focused not only on the performances but also on storytelling.

The next part of the event focused on presenting the results of the survey the group conducted for their Zero:Fever album series. 36,023 ATINYs participated in it, making ATEEZ more joyful and thankful. 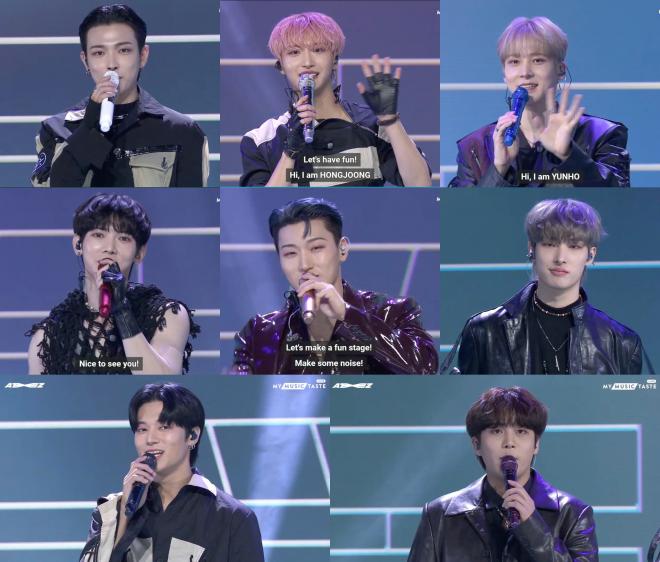 The survey showed that many fans liked the concept photos for “THANXX,” and this is because the members liked their casual and mischievous appearance. This was followed by “Deja Vu,” “Inception” and “Eternal Sunshine.”

When it comes to the b-side tracks, the majority of the ATINYs answered “Take Me Home” as their favorite. “Inception” came in second followed by “Rocky,” “THANXX,” and “Not Too Late.”

It is no secret that ATEEZ is best when it comes to creating exciting storylines for their music videos. However, if there is one that greatly stood out for fans, it was “Inception.” Many ATINYs also liked the story line for “Deja Vu” and “Eternal Sunshine.”

In terms of choreography, many fans liked what ATEEZ has delivered for their most recent song “Deja Vu.” This was followed by “THANXX,” “Inception,” and “I’m the One.”

To end the special corner, ATEEZ greeted ATINYs in advance for the third anniversary of the fandom on November 17. They also presented a versatile and fierce “Good Lil’ Boy” performance.

Breaking away from their signature powerful image, ATEEZ then showed a cute and heartwarming video showing their beautiful brotherhood. The members took turns in writing short letters of appreciation for the two members they are most thankful for. They then placed their written notes in front of the refrigerator for all of the members to read and they should guess who wrote the notes for them.

Right after the special clip aired, ATEEZ performed their soft and inspiring track “Time of Love,” while donning matching brown ensembles. While displaying their fun sides and genuine friendship, the members also expressed their love to fans by saying “I love you, ATINYs.”

Making the event more meaningful, the boy group also read some letters from their fans and thanked them for making such a huge effort to send them some.

ATEEZ also played a fun game where they should answer the questions asked by the members correctly to avoid getting hit by a plastic hammer. All of the questions have something to do with their past events and releases, and it was fun seeing them remembering all of what they have been through during the last three years.

Their alter egos called “HALA TEEZ” also made an appearance and gave them hints during the segment. Hongjoong, Seonghwa, Yunho, Yeosang, San, Mingi, Wooyoung, and Jongho did a great job in delivering entertaining banters and portraying their alternate roles.

After thanking fans for their continuous support and love, ATEEZ performed their cheerful track “Eternal Sunshine.” The way the members delivered the lyrics to the song was like saying to ATINYs that they are their source of light and happiness.

“We would have waited forever for you,” Mingi said, prior to ending the beautiful and touching segment.

Capping off the festivities, each member expressed their gratitude to fans during their final ment. San said, “I have been dreaming for this moment to come.”

Meanwhile, Yunho stated, “Online concert with you was so fun and surreal. I realized how much technology has evolved. But I still prefer offline. Thank you ATINYs.”

Expressing his desire to meet fans in person, Yeosang said, “We showed you many performances, which made me remember the old days. I realized how much days we have spent together, I miss you all.”

“I want to see you in person too and make eye contact as much as we can,” Songhwa added.

Mingi, who fans and the members greatly missed due to his hiatus, also expressed his happiness. He said, “I don’t want to be sad. It was different from our previous concerts. It was fun and I really enjoyed it. The day that we will meet again is already coming so please wait for us.”

Delivering his final remarks, leader Hongjooing stated, “This is the final installment in the FEVER series. I thought about it and what it meant for us members and ATINYs. We wrote lyrics about our youth and feelings. I hope everyone will be uplifted by our songs. Whenever hardships come, rest assured we will continue to work hard.”

To end the concert on a good note, ATEEZ performed their comforting bop “Fever.” Yunho even shouted, “We are the youth” prior to starting the song. This track serves as the best way to end the event, given its deep but impactful message. 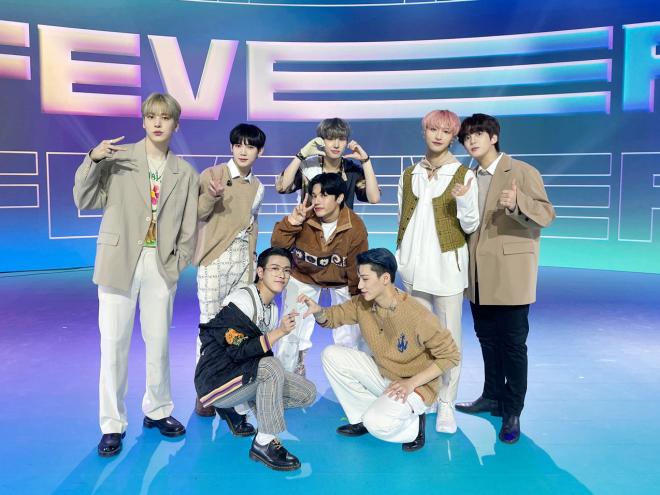 Meanwhile, ATEEZ just announced their 2022 world tour [THE FELLOWSHIP : BEGINNING OF THE END], which will take place in South Korea, the United States and Europe.

Photos from MyMusicTaste and KQ Entertainment

Hellokpop thanks MyMusictTaste for the complimentary ticked to the event.