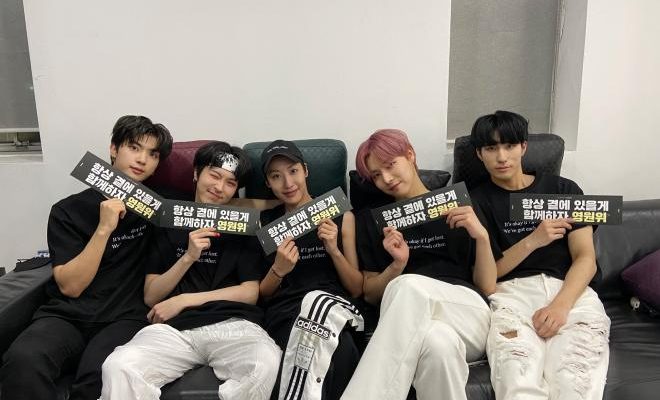 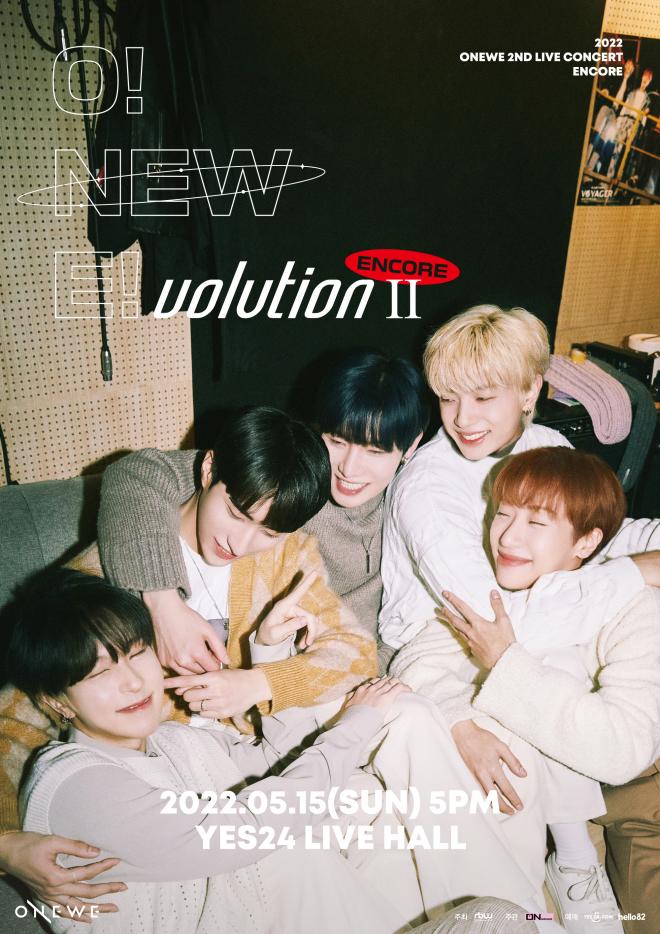 Amidst the ongoing effects of the COVID-19 pandemic, the boys made sure that their global fans would have a good time during the one-day event. They were able to deliver fun talking segments as well as top-tier stages using only their innate singing and instrument skill.

Held in celebration of their third debut anniversary, the show took place on May 15 at Yes24 Live Hall, Seoul at 5 PM KST. It aired simultaneously via hello82.tv’s website, giving global fans the opportunity to join the music party.

The event provided viewers with an unforgettable experience as well as outstanding unit and cover performances that ONEWE is best known for.

ONEWE began the concert by performing their heartfelt signature songs “Intro : 우주선 (Spaceship)” and “Rain To Be.” Both songs came from their iconic first EP, Planet Nine: Alter Ego.

While performing, the members unleashed their impressive on-stage presence and suave expressions. They all looked cool and powerful, while playing their respective instruments.

To sustain the energy they built and to further increase WEVEs’ immersion in the event, the group continued their introduction stage with riveting performances of “Montage_” and “AI.” While donning chic and rocker-style outfits, they proved through their charisma, effortless gestures and movements, and soothing voices why they deserved to be recognized more by many. 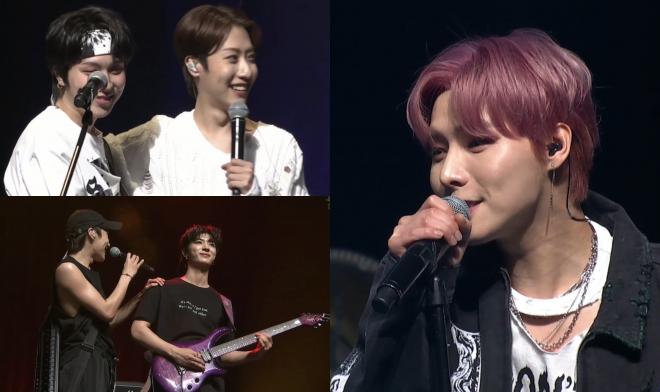 ONEWE immediately performed their classic and vibrant track “0&4” and the rock version of their track “Love Me,” right after before proceeding with their first ment.

Yonghoon, Harin, Kanghyun, Dongmyeong, and CyA took time to introduce themselves to viewers one by one, sharing their warmest greetings. The boys delivered their warmest affections to both online and offline attendees, emphasizing how happy they are to spend a meaningful time with WEVEs again.

The members’ interactions between performances definitely show how deep their bond and friendship are.

After the first ment, ONEWE proceeded with introducing more of their hit tracks. They took fans on a trip down memory lane by showcasing their 2019 track, “Regulus.” This song is very much loved for its addictive tone and touching lyrics. During their performance, the members effortlessly drew attention with their emotional and sincere facial expressions. The fanchants in the background made it even better.

WEVE, are you ready for all the feels!?🥺

Celebrate ONEWE's anniversary as they "reminisce about (it) all"! 🤧💕

The boys followed it up with “Parting” and “Envision_,” making the second part of the show more memorable. The members’ styling and handsome looks were not the only ones that stood out. The whole presentation of the three songs drowned WEVEs in the artists’ honey-like vocals and strong talents.

Ending the second corner with a bang, ONEWE took turns to greet fans again but this time in different languages. Member Harin even asked offline viewers to do a wave, adding interest to the already fun event.

ONEWE’S concert would not be complete without their special cover and unit stages. The boys presented a girl group medley that brought out their unique individuality, impressive vocal range, and versatility.

The songs included in their amazing mashup are (G)I-DLE’s “Tomboy,” IVE’s “Eleven,” aespa’s “Next Level,” and BLACKPINK’s “Lovesick Girls.” Interestingly enough, Yonghoon, Harin, Kanghyun, Dongmyeong, and CyA already performed these tracks on their recent You Hee-yeol’s Sketchbook guesting in April.

During the said corner, the boys made singing and playing instruments look easy while showcasing their excellent projecting skills. They were able to add a unique touch to the songs and hype the audience with their overflowing energy and passion.

With their solid voice quality, it was no surprise to see the boys engross the viewers and ace the cover stages.

Prior to this, ONEWE did not fail to present some of their underrated b-side bangers from albums Planet Nine : VOYAGER and MEMORY: Illusion namely “Trauma (Aquarium)” and “Trigger_.” The boys yet again showed their great charisma and massive stage presence.

Following their fun cover performance, the boy band presented special unit stages. The first one featured the eldest members of the group, Yonghoon and Harin, and Kanghyun performing BLACKPINK’s “Forever Young” with a lively and powerful arrangement.

Meanwhile, members Dongmyeong and CyA performed an enthusiastic track titled “Salty Boys,” while getting closer to the audience.

FROM ONEWE WITH LOVE

For the rest of the event, ONEWE offered incredible stages full of WEVES’ favorite songs. From “Aurora” to “Orbit” and “Cosmos,” the group proved their polished skills and top-tier vocal range. They also switched to casual outfits during this part in order to create a genuine atmosphere. These tracks definitely grabbed both eyes and ears from start to end.

After this, the boy band performed two tracks that are extremely close to their heart. One of them is “Roommate,” which tells their story as a group. They wrote this song 4 to 5 years ago, and its lyrics signify that they found calmness and peace with each other. Meanwhile, the other track is “Starlight,” which details their beginning as a group, specifically as M.A.S 0094.

Both tracks unleashed the boys’ chemistry and emotions as they sing about their long and meaningful journey as a group. 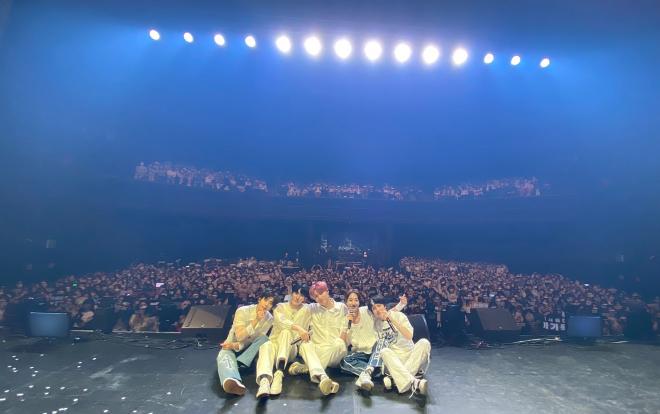 To cap off these performances on a good note, one of the members stated, “These songs are so meaningful. The 3 years [from our re-debut] is not a short time and it is touching WEVEs were with us.”

As the concert was coming to an end, the members performed two more touching songs for their fans. Titled “Universe_” and “Reminisce About All,” both songs have deep messages and disguise as an ode to WEVEs, who have been supporting them since day one.

Harin even cried during the performance as he saw fans raising their banners with the words, “We’ll always be by your sides. Let’s be together for-ONEWE-ever.”

After this, Yonghoon revealed that they are actually soft despite their strong facade. He also stated that always feel sentimental whenever they sing “Universe_”, especially in front of an audience.

They ended the corner by taking a photo with WEVEs, who were physically present at the concert.

ONEWE also each expressed their gratitude to fans during their final ment. Dongmyeong said, “I was very excited for today as we couldn’t perform a lot during the pandemic. And we really wanted to, which was why I patiently waited for today. Things are better now so I am happy to see WEVEs. We are going to do music forever, please continue to show us your love.”

Meanwhile, Kanghyun said, “I liked how I could hear the WEVEs voices. Last time, when I made a mistake, I was worried but you sent me such great support. Thank you.”

Expressing his desire to meet fans again soon, Yonghoon stated, “I want to say thank you. Let’s do another concert. The weather is nice now. Take care of your health and let’s meet again. Please come again.”

“I feel like there are more performances we can do now, which makes me happy. I hope we can meet more WEVEs in the future. Thank you for coming today and I love you,” CyA added.

Harin, who felt the huge amount of love sent by WEVEs during the concert, also expressed his happiness. He said, “Time flies. We were busy and prepared hard. We had a great time today and time flew by and I cannot believe it. I cried so my head went blank. Thank you for being by our side and for making this possible WEVEs. I love you.”

They then proceeded with an enthralling performance of “End of Spring” and “0&4” in collaboration with their fans.

Ending the concert with a bang, ONEWE sang “Crazy Good,” “Veronica,” and “Eraser.” While bidding their final goodbyes, Dongmyeong stated, “What a great day. I will sleep well tonight. ONEWE on stage right now and the music we made, this was all thanks to WEVEs. Please be careful of COVID-19. For the rest of 2022, let’s fill it with happy memories. Thank you for coming.”

These tracks serve as the best ways to end the event, given their fun atmosphere and impactful message.

Hellokpop extends gratitude to hello82 for the complimentary ticket to the event.

Event covered by: Patricia for HelloKpop

Photos from hello82 and RBW Entertainment