[CONCERT RECAP] PENTAGON Enthralls With Energetic And Evocative Stages In Their Online Concert “WE L:VE”

PENTAGON held their much-awaited online concert WE L:VE and stunned with stages full of power-packed as well as poignant moments!

PENTAGON revealed their online concert WE L:VE during which they lit up the stage like the stars they are with one dazzling performance after another. Moreover, the bedazzling boy group had Universes enraptured with some fun surprises coming their way through the event. 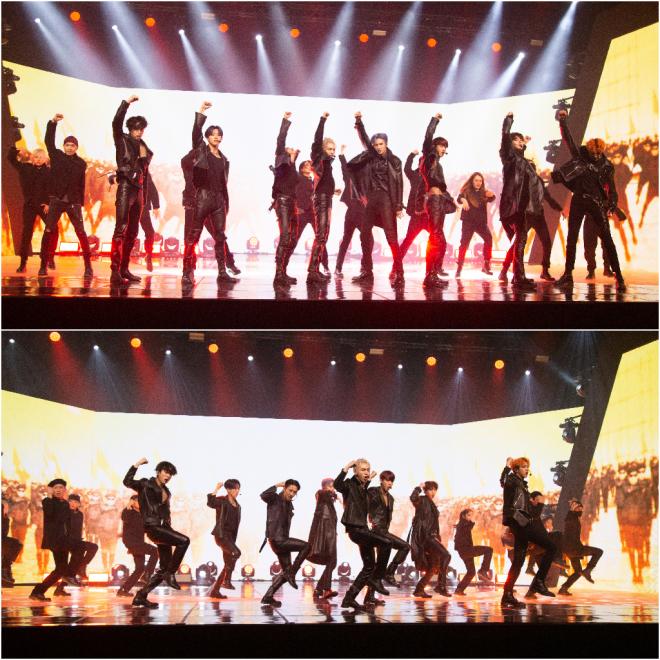 Bringing forth a revolution on stage, the group commenced the event with a powerful performance of their track “Basquiat”. They further built up the excitement of fans with their ferocious performance of the track “Gorilla” post which they impressed with another stage wherein they asked, “Can You Feel It”.

After alluring fans with their thrilling acts, PENTAGON took a breather to interact with their beloved Universes as they introduced themselves and greeted fans in various languages such as Japanese, Hindi, French, and German to name a few. The members all spoke to fans and asked them to tell them via comments if they were enjoying the show so far and expressed their happiness in reuniting with them through the online concert as well and averred that they will work had to showcase performances and dances till their ankles get crushed.

PENTAGON then proceeded to enter “The Black Hall”, a song that had been much requested by Universe for the group to perform as they moved forward to the second chapter of WE L:VE.

Chapter 2 : We L:VE With Colors

Unraveling their next chapter of the concert, PENTAGON wowed with their unit-based stages, starting with a supercool performance by Hui and Shinwon. The duo exuded dynamism to its max as they stunned with their track “WTH” which was the epitome of the word ‘rocking’. Both the members floored with their lethal charms and that bad boy energy that they channeled with their edgy looks. 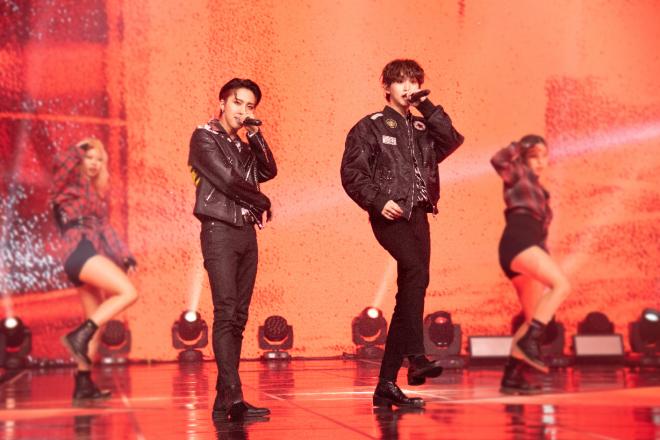 Next, Wooseok and Yuto looked like coolness personified as they presented a fun hip-hop stage wherein they performed the tracks, “독” “ALWAYS DIFFICULT ALWAYS BEAUTIFUL”, and “도돌이표”. The pair mesmerized with their energetic demeanor in this vibrant act that was both, bold and beautiful. 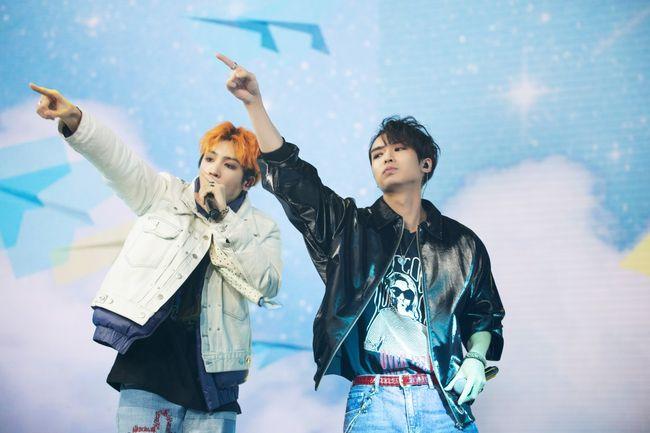 Yanan and Hongseok surely had Universes looking for that box of tissues thanks to their soul-stirring performance. The singers captivated with their dulcet tunes as they harmonized their vocals like a dream when they sang, “I Will Go To You Like The First Snow”. 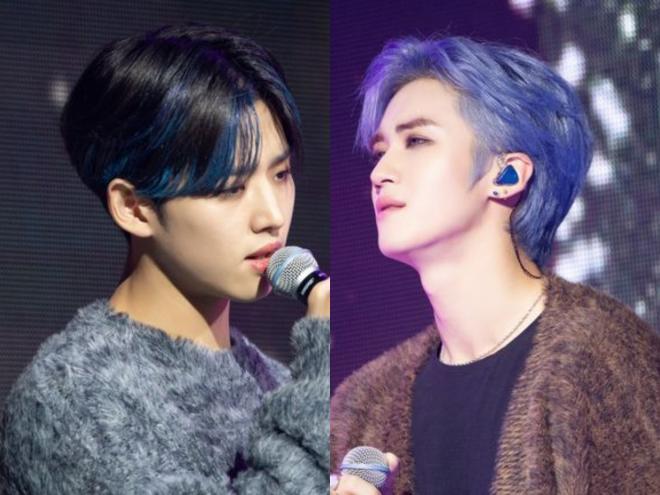 Yeo One and Kino showcased that they ‘got the rhythm’ indeed as they unveiled a stellar rendition of Taemin’s iconic track “Move”. The performance was absolute perfection to simply say so as both the artists took breaths away with their saccharine vocals as well as their ‘move’s that matched every beat of the track. 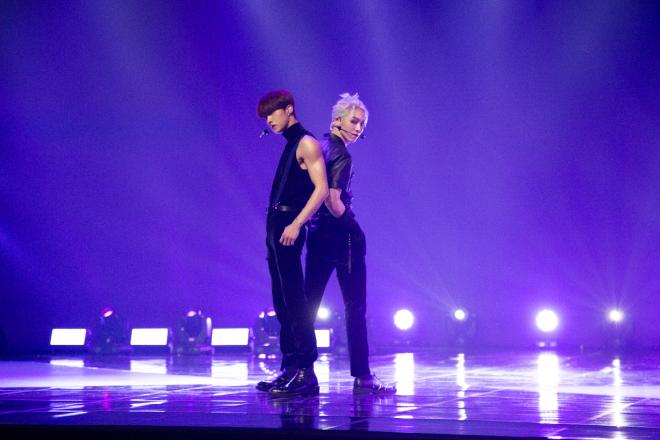 After shaking hearts with these unique unit stages, PENTAGON unlocked the next chapter into their captivating concert.

This chapter could not be more aptly named as the group manifested this youthful vibe which was endearing as well as entertaining. PENTAGON members introduces themselves (including member Jinho) in a classroom to their teacher Yeo One and the new kid Kino.

The group then dropped another surprise for fans as, during the classroom skit, PENTAGON unveiled a cute performance for the Korean version of their melodious track “Happiness” as well as the song, “청개구리”. Furthermore, the boy group beamed with their stage for “Shine”. Fans were then treated to an endearing performance of PENTAGON’s hit track “Spring Snow”.

Hui expressed that the stage is not just his workplace but also his battlefield where he feels most pressured and where he has the most hardships and where it brings him the greatest pain. However, having said that, he added, “The stage is also a place that brings me the greatest happiness, as well as the greatest joy and achievements. It is a space where contradicting emotions exist”. 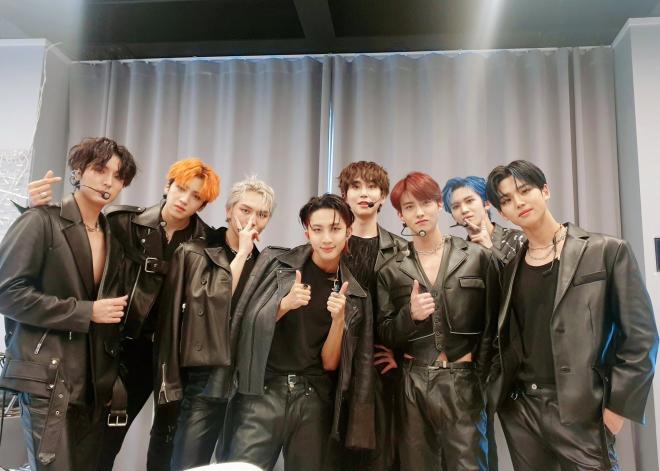 Next, they were asked what feelings do they usually get being on the stage. Kino revealed that he feels thrilled and that, “there are a lot of plots to stages that head towards the climax followed by the punch, and the audience goes “wow” and there’s this feeling when everyone’s eyes are on us. When I feel that, something sparks in my mind and I can’t let go of that feeling so I keep going”.

Yeo One said, “I think all the emotions that humans can possibly feel, can be experienced on the stage”. The singer then recalled an instance wherein on their 2nd anniversary he heard the cheers of fans and teared up due to the sheer happiness he experienced in the moment. Member Yanan stated that stages brought him more frustration over joy, “Because I could never live up to my expectations. So I was often frustrated. But I love what I do so I don’t give up.”.

Hui explained, “Recently, (the stage) brings me a bit of sadness because its not long till I enlist in the army. Every time I sing, I think of every word Universe has said to me, the way Universe smiles and cries looking at me. So its tough to keep singing and so the recent stages have been a little sad for me”.

Lastly, they spoke about when they feel the most alive being on stage. Shinwon said that he feels alive in every moment on the stage. He opened up that when they’re not working they feel empty and that, each time they come back with a new album and perform, is when he feels the most alive. Yuto quipped, “Right before I perform and I hear Universe scream “It’s Yuto!” is when I feel alive, when I hear their voices”.

Hongseok stated, “When I’m performing with the audience, making eye-contact, feeling their energy and singing with them”, he added, “I feel most alive at moments of interactions with the fans”. Wooseok echoed his sentiments and revealed, “When we perform, we often make eye-contact with the audiences and cheer together. When I see their sparkling eyes, I once again love and appreciate my job, its when I feel most alive”.

PENTAGON then spoke about how grateful they were to be able to hold the online concert and hoped that they would get the opportunity to perform in front of Universes soon someday. They also asked their fans in the sweetest way if they were enjoying the show after which, they presented the stage for the one and only QUEEN “Daisy”!

Chapter 5 : We L:VE In The Universe

PENTAGON closed the stage with their riveting performance for “Daisy”, however, Universes did not want to see their favorite boys leave and filled the comment section with requests for an encore. And were these requests answered? Yes and how! The group revealed not only one of the sweetest tracks titled “To Universe”, but also shared loving messages for their fans. Below is the translation of each of the adorable notes.

Hello friends!! Haha, surprise! It’s me ~ I’m texting to say thank you always. You know I’m always happy because of Universe, right? I’m such a blessed person… Let’s meet more in the future~!

Universe, how are you doing? It’s been almost a year since I saw you. I can’t wait to meet you soon. How much strength do I give to Uni? I’m curious! Oh~I see~ I will always try to be a better person!!

It’s a delivery for Wooseok’s healing message! I heard you are awfully worried days! Don’t worry ^v^ Everything will be alright ♥️ There will only be joyful days ahead ㅎVㅎ Forever ♥️

It’s been so long since we’ve last met. Your existence was always so precious to me, but it hits me even harder these days… Universe.. so precious. You’re the driving force of my life. I like you! I like you! Muah Muah! 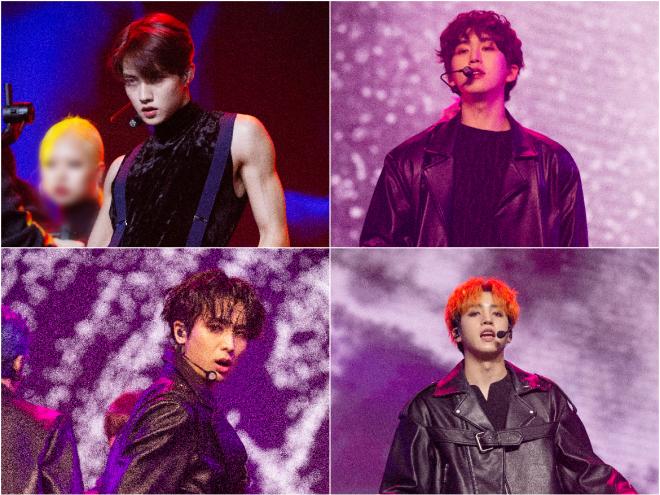 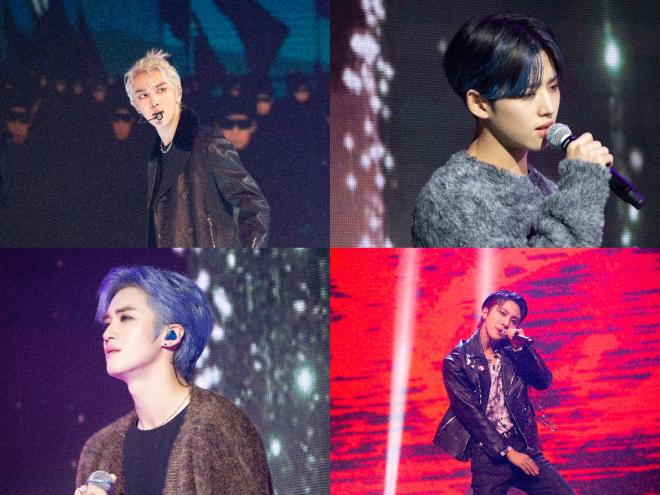 I have a confession to make.. my everything Universe.. my friend and my love… oh.. you were asleep? Sorry.. But I want to tell you this.. I love you ㅎㅁㅎ

Can I ask you a favor? I want to see the speed of Universe’s comments! Ready, set, go!!! Wow! Can you do it faster than this? Wow! That’s my Universe! I miss you cannot possibly express how much I truly miss you. Till we meet again, Oh, when we meet again, My Universe, I love you

Mine~ Are you enjoying the show? I’m afraid today is probably… It will be the last concert of the year. Have you all made precious memories? Don’t go anywhere until it’s over! There are still a lot of surprises ahead. You know I always love you right? I love you my babies ♥️♥️

My Universe, the most precious in the world! We’ve made so many memories over the past four years, right? Holding on to them, I will go serve in the army and be back very soon 🙂 None of the words, none of the things, could possibly compare to Universe. Under the name of PENTAGON, we love, breathe, live – all that is because we live in Universe. Even in the future and forever, we will live in Universe and sing. I love you all a lot ♥️

Staying true to their promise, PENTAGON had yet another surprise planned for their dear fans, but before they unveiled that, their Universe decided to surprise them instead and during the performance of the track “Nostalgia”, fans from across the globe joined the group and sang along with them, moving them to tears.

Concluding the show-stopping event, PENTAGON gave fans a precious gift in the form of a track made by member Kino titled “Eternal Flame”. To say that this track truly reflected the love that the group holds for their fans would be an understatement. The lyricism holds a beautiful message that the group wanted to relay to their Universe of always staying by their side with their love burning bright like an eternal flame.

Meanwhile, PENTAGON’s winning track “Daisy” was selected in the songs section of TIME Magazine’s “The Songs and Albums That Defined K-Pop’s Monumental Year in 2020”.