[Exclusive] Interview: Apollo 18 on their past, present, and future 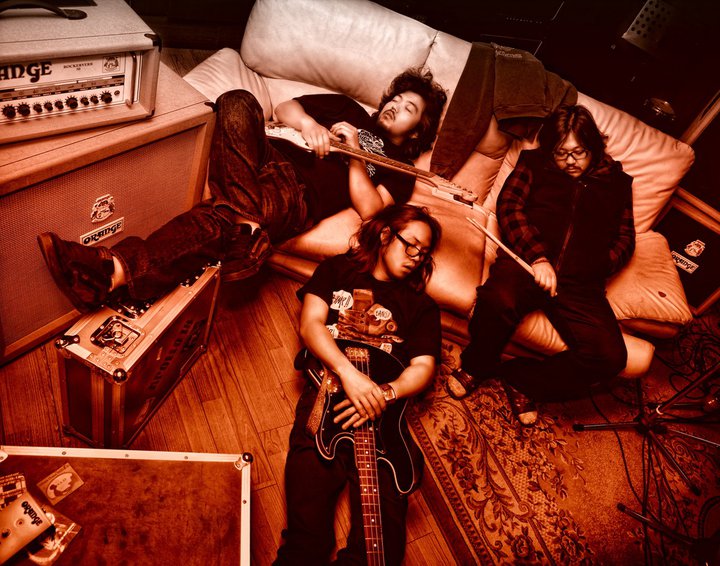 We recently reported that Korean indie group Apollo 18 would be holding their latest tour in Canada this month. With the rising global interest in indie groups, we have the opportunity to learn more about Apollo 18 for our readers and indie fans.  Even in the midst of busy preparations for their Canadian tour, we are indeed honored to be able to have this extensive interview with band members Choi Hyun-seok, Kim Dae-inn, and Lee Sang-yun, as they discussed their past, present and what they hope to achieve in the future!

Q1. Could you start off by introducing yourself to our readers. How would you describe your group to those who may not be familiar with you?

Dae-inn: “Hi, we’re a rock band called Apollo 18 from Seoul, Korea. I play bass, Hyun-seok plays guitar, and Sang-yun plays drums. We started playing music together as Apollo 18 in the summer of 2008. We won Korea’s Hello Rookie championship in late 2009 and “Rookie of the Year” at the 2010 Korean Music Awards.Last year we toured the United States and played 16 concerts in 13 days while we were there. It was a really busy schedule, but so much fun! We also performed at Japan’s Fuji Rock Festival and Taiwan’s Beastie Rock Festival. This month we are playing our first gigs in Canada and will make an appearance at the Pop Montreal music festival.”

Q2. Could you tell us a little about your musical backgrounds?

Dae-inn: “We all started playing music in either middle school or high school.  When I was a teenager I really loved Nirvana.  I started playing guitar because I thought Kurt Cobain was cool and I wanted to play guitar like him.  Before starting Apollo 18, I made solo electro-pop music under the name Jellyboy.  I began playing bass when Apollo 18 formed.”

Sang-yun: “I began to play drums in middle school.  I saw a TV program about a street drummer around that time and I felt really inspired after watching it so I wanted to learn how to play drums.”

Hyun-seok:  “In my early teens, I liked British pop music.  Then an old friend exposed me to hard rock bands.  After that I began listening to punk and other kinds of music.  I began to learn how to play guitar after watching a video tape of guitarist Marty Friedman from the American metal band Megadeth.  I thought the things he was doing were amazing, and after watching that video I really wanted to learn how to play guitar too.” 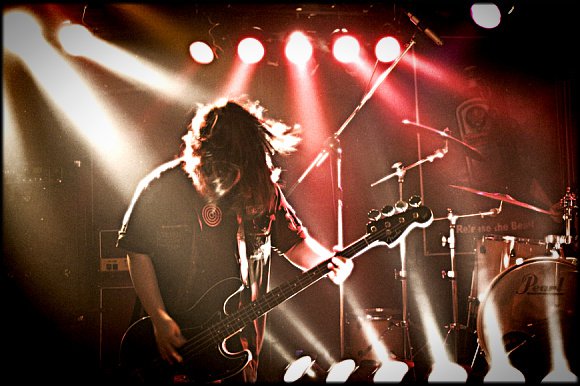 Q3. Of all the songs Apollo 18 has released, which would you say speaks to you the most? What is your favorite song to perform at live events?

Dae-inn: “I really like “Discharge” from our Red album.  I like the guitar melody, the bass line, and the drums on that song and I get really excited when we perform it live.”

Sang-yun: “My favorite song to perform live is “Manic Depressive” from our Blue album.”

Hyun-seok: “I have lots of songs that I really like to perform live.  “Song A” from our Violet album is one of our songs that speaks to me the most, though.  I wrote the song for my girlfriend.  We have been together for a dozen years now, but we had broken up for a period of several months when “Song A” was created.  We got back together a few weeks before Violet was released. When she first listened to the album, I told her it was her song.”

Q4. Your music ranges throughout the rock spectrum, from hard rock to psychedelic funk and everything in between. Do you feel that the utilization of multiple rock styles gives Apollo 18 more artistic freedom when composing and writing songs?

Dae-inn: “Artistic freedom isn’t something we’ve ever thought about.  We make music we like and we’ve been lucky that other people have enjoyed it too.  We all like a wide range of music, but have different tastes in music.  All of our songs are created by jamming together and I think the tracks are sort of a middle ground between everyone’s different tastes.”

Q5. What would you say is the most difficult part about being a musician in Korea right now?

Hyun-seok: “Being an indie musician is difficult everywhere in the world.  It’s always a challenge to expose larger audiences to your music and to find the funds to make albums, music videos, and to go on tour.  Korea’s indie scene is small, but it’s starting to slowly get a bit more attention at home and internationally too.  As musicians we have to keep pushing ourselves to get better and better at playing and promoting ourselves to Korean audiences and fans overseas as well.”

Q6. When you formed Apollo 18, what long term goals did you set for the group? Do you feel that you have achieved some of your goals? What aspirations have you yet to obtain?

Dae-inn:  “When we formed Apollo 18, we didn’t set any long-term goals.  We had a plan to release three albums over the course of a year (our Red EP, Blue full-length, and Violet EP).  The idea behind that was for us to experiment with different sounds and try lots of different things out on each album before we settled on the kind of music we wanted to make.  Although we had a plan for those albums, my expectation for the band was that we were just going to be doing this mainly for fun.  We’d play some gigs in Seoul’s Hongdae area and hang out and drink together.  We never expected to win awards for our music, play at major festivals, and be able to tour abroad.” 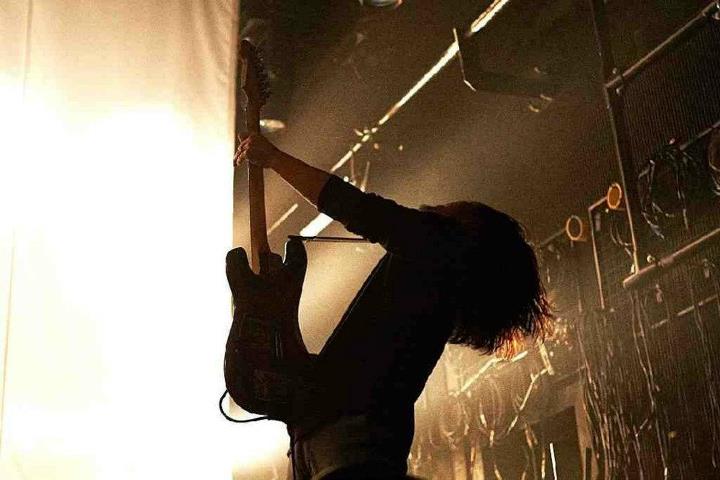 Touring and the global market

Q7. As our readers know, Apollo 18 conducted a US tour last year and performed at the world famous South by Southwest Music festival in Texas. How did it feel to play such a prestigious event? Would you like to perform there again?

Hyun-seok: “It was really cool to play at SXSW.  Around 2,000 bands play each year over the festival’s four days so there’s music everywhere you go in Austin.  You can see band’s playing in clubs, on the street, in parks, in supermarkets, in restaurants, and my friend said he even saw a show two years ago during SXSW in a furniture shop!  We got a great reaction from the crowd during our official showcase.  We also played a few unofficial daytime parties during the festival and those were a lot of fun too.  One of the parties took place in a backyard behind a tea factory.  The police came because we were too loud.  It felt really rock ‘n’ roll to us!”

Sang-yun: “If the chance came to perform at SXSW again, we’d love to do it.  But the next time we tour the US I think we’d like to play in other parts of the country, though.  There are lots of different places in the States that we’d love to see and perform in.”

Q8. With your Canadian underway, there has been a lot of buzz online about Apollo 18 and your live performances. What can fans expect when they come to see you perform live?

Dae-inn: “They can expect us to play loud and with a lot of energy.  We’ll be playing songs from all our albums and maybe one brand new song too.  Canadian audiences don’t get many chances to experience Korean rock bands live, so we want to work extra hard at our upcoming concerts to show people exactly what Korean bands can do and hopefully make people want to learn more about Korea’s indie scene.”

Q9. What made you decide to do a Canadian tour as opposed to say a tour in the UK where Korean rock and indie is highly popular? Are there any future plans to tour in the UK or Europe?

Hyun-seok: “Our main reason for doing these shows in Canada was to play at the Pop Montreal music festival.  We read about the festival several months ago.  It sounded like a really awesome event, so we applied to be a part of it.  We’re so honored that we have been invited to play at the fest.  We’ve actually wanted to tour in Canada for a while now.”

Dae-inn:  “We’ve never heard about Korean rock music being popular in the UK.  What Korean bands have followings there?  Anyway, that’s interesting to know.  We’d like to try and tour Europe sometime next year if possible.” 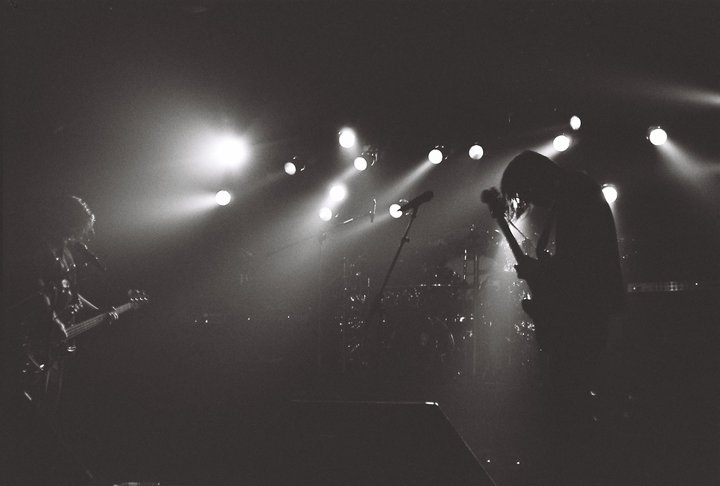 Q10. You have mentioned in a recent interview that Apollo 18 have been contemplating holding more international tours next year. Are there any specific countries that you have in mind?

Hyun-seok: “We’ve had some brief conversations with a few bands we’re friends with about maybe touring together in the US and Europe next year.  We’ll talk more about it in the coming months.  It would be really cool if both tours can come together.  We’d like to return to Japan and Taiwan next year too.  We had a great time performing at in both countries last year.  We’d like to do some shows in China as well if possible.”

Q11. It’s been awhile since Apollo 18 last released an album and it has been rumored that you are currently working on a new album? Is that true and how is the albums development coming along?

Sang-yun: We are working on the follow-up to our 2011 Black EP now.  We’ve got four new songs written and started playing one of the tracks live a few weeks ago.  We want to write at least another six tracks after our Canada gigs.  We want to try and release the album in late fall or early winter.

Q12. Is there any special message you would like us to relay to all of Apollo 18’s international fans?

Dae-inn: “Thank you so much for listening to our music.  We love meeting new people and learning about their lives, interests, dreams, culture, and anything else they are happy to share with us.  We hope we can have the chance to share our music live with you one day in Korea or abroad and afterward meet you and get to know about you.  Thank you so much for taking the time to read this interview.  We are very grateful for your support!”