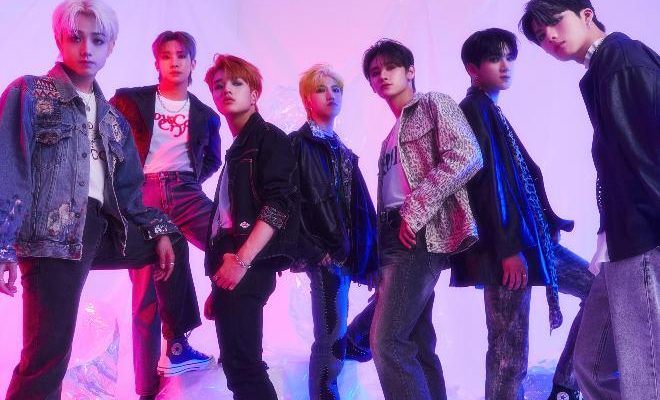 After entering the K-Pop industry in January 2022, TRENDZ returns with an addicting mini-album that describes its inner darkness and chaos.

TRENDZ absolutely arrived powerfully in the first month of 2022 after debuting under Interpark Music Plus. Consisting of seven members namely Havit, Leon, Yoonwoo, Hankook, Ra.L, Eunil, and Yechan, TRENDZ actively drew attention with its unique and powerful appearance, of course, with a bit of restrained mature masculinity. The rookie boy group introduced itself to the world with the debut EP, Blue Set Chapter 1. Tracks, on January 5, 2022. And now, months after the much-anticipated debut, TRENDZ returns with the 2nd mini-album Blue Set Chapter 2. Choice. This album is a continuation of the worldview of “Blue Set” and is constantly drawing enthusiastic cheers with the members’ dark sexiness in every performance.

To celebrate the group’s comeback with the 2nd mini-album Blue Set Chapter 2. Choice, TRENDZ sat with Hellokpop for an exclusive interview.

Hellokpop [HKP]: Hello, TRENDZ! Firstly, congratulations on your comeback! Thank you for sharing your time with Hellokpop, please introduce yourselves to our readers.

TRENDZ: Zoom in TRENDZ! Hello, Hellokpop readers! We are TRENDZ.

TRENDZ [Hankook]: We have now made our comeback with the 2nd mini-album Blue Set Chapter 2. Choice. It’s really an honor to greet Hellokpop readers through our 2nd mini-album. We look forward to having this interview with everyone today.

We had an exclusive interview with #𝗧𝗥𝗘𝗡𝗗𝗭 recently! Stay tuned for the feature! 😎@TRENDZ_OFFCL #울부짖어WHO

TRENDZ [Havit]: Our 2nd mini-album Blue Set Chapter 2. Choice is the first album from us that has a complete storyline. Through this album, we tried to capture the members who were following their footsteps in deeper chaos and despair standing at a crossroads, constantly thinking about which choice is the right one and continuously trying to move forward!

TRENDZ [Yoonwoo]: This album also contains five songs, each having a different genre so we would appreciate it if everyone show a lot of interest and support as we worked hard to show you a different side of us in each song.

TRENDZ [Ra.L]: And of course, we can’t leave out introducing our new title song, “WHO [吼]”~  The title song “WHO [吼]” tells TRENDZ at a crossroads, continuously moving forward, contemplating, doubting, and looking for answers. The title contains two meanings, one of which is the question that was thrown at the answer at the end of the crossroads- who? And the other, the inner sound of confusion at the crossroads which is expressed by the Chinese character for “WHO!” 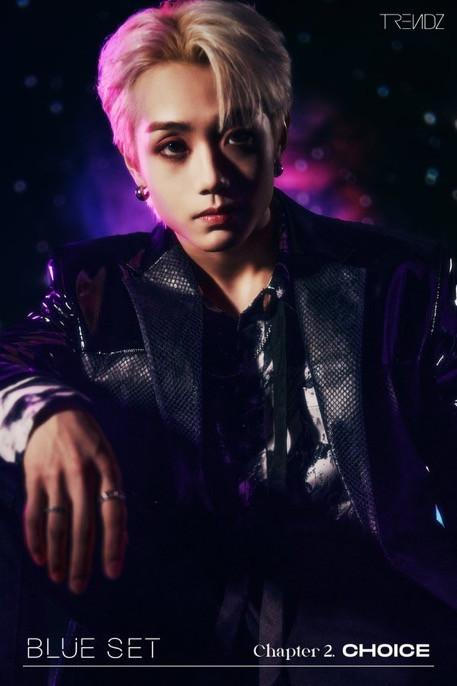 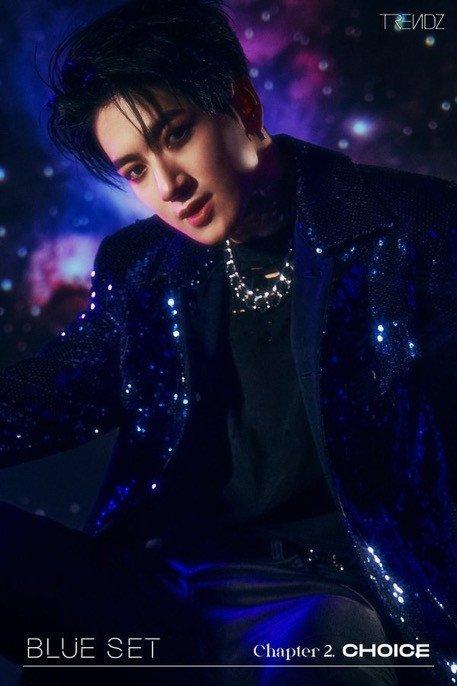 HKP: Many of the members including Hankook, Ra.L, Eunil, Leon, and Yechan have participated in the lyric-writing for the tracks on this album. Can you tell us further about the process? What messages did you want to convey and where did you find inspiration for the lyrics?

TRENDZ [Eunil]: The members gather together whenever we write the lyrics and we think about how to make a good image frame for each song. We each say words that fit the frame and decide a keyword that would best describe it. After that, we each write our own lyrics. When I wrote “re:daybreak” for this album, I went to the Han River alone at dawn and tried to capture the feeling of dawn through the song.

And usually, I get a lot of inspiration from watching movies and dramas. But considering the atmosphere of the song when I write the lyrics for it, I think about what a certain movie or drama is about so that the OST will fit. 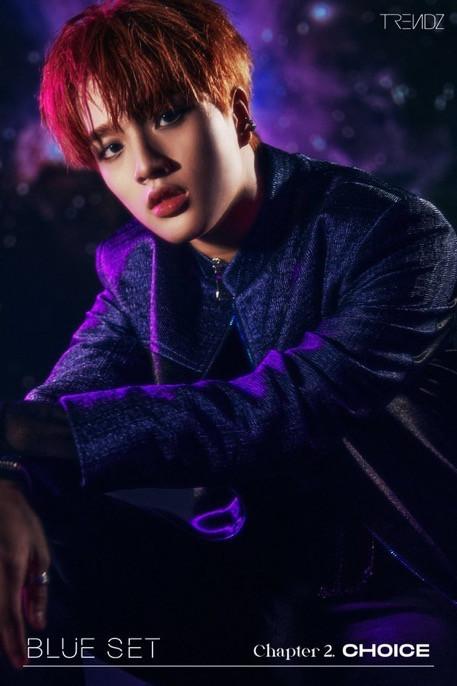 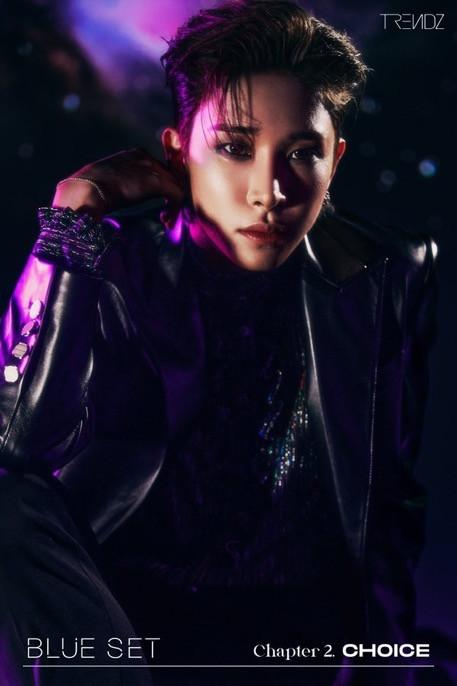 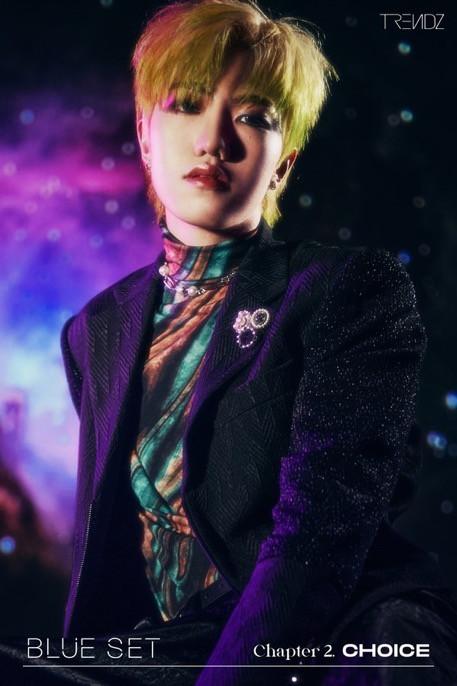 HKP: The music video for “WHO” shows a more mature side of TRENDZ and really highlights your acting skills. Do you have any memorable moments from shooting the music video that you’d like to share with fans?

TRENDZ [Hankook]: In this music video, there’s a scene where Eunil and I fight. We’ve never fought like that before, so it was so awkward to film. The director asked for a fierce fight, but I remember how awkward the both of us were and it was a difficult experience. When we filmed this scene, all the members watched it. We laughed so hard that we laughed a lot whenever the director will cut the scene.

TRENDZ [Havit]: And if you watch our music video, there’s a scene where we’re lying down together. We filmed that scene at the end of the second day, so everyone was a bit tired. But I guess I was really lucky because when I was lying down comfortably leaning on them, I closed my eyes and opened my eyes and the shoot was over. I actually fell asleep without realizing it. I’m sorry to the members who were in an uncomfortable position, but I remember it being really comfortable and cozy. 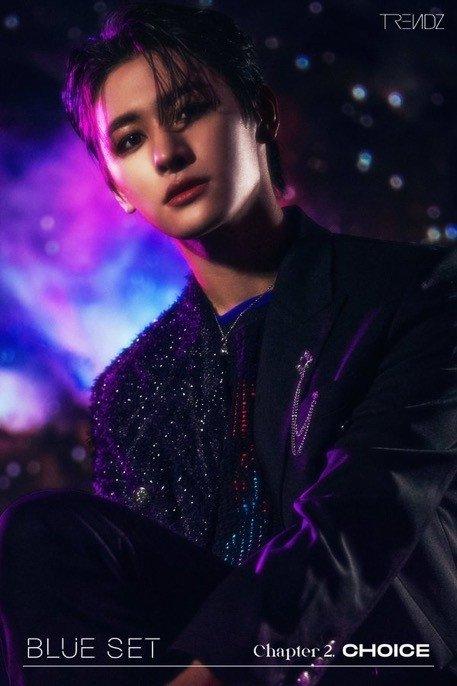 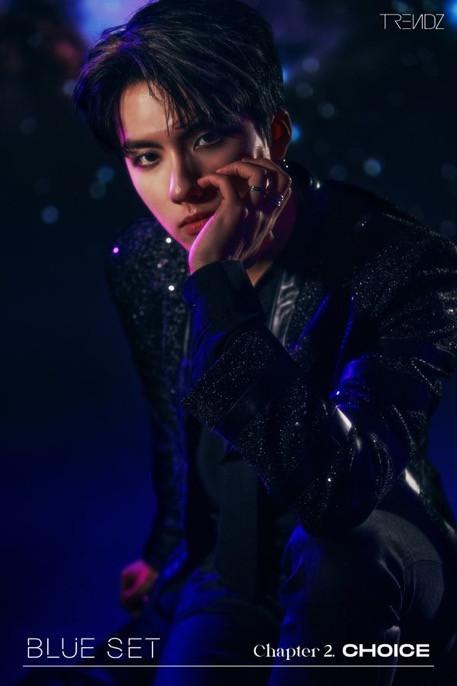 HKP: What track is your favorite on the album and why?

TRENDZ [Eunil]: My favorite track in this album is “re:daybreak!” It is a song about the time between dawn and morning, and I wanted to express that if the night is like chaos, then morning is hope. And in the middle of it, morning is the time when you constantly think and long for hope. I think I’m really attached to it because it’s a song that I poured all my efforts into and wrote the lyrics for.

TRENDZ [Leon]: My favorite song is “Forever more!” The lyrics for “Forever more” that goes “I won’t let go of any end. I won’t get tired. I will not forget every moment that we spent together” makes me emotional and reminds me of my difficult times. I really like this song because it is a song that heals. 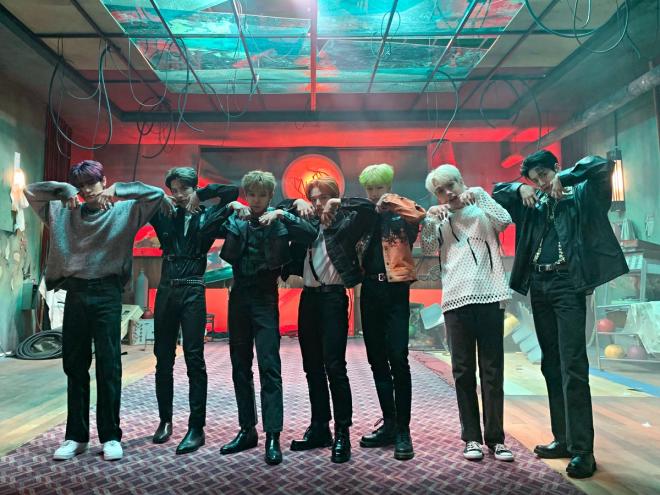 HKP: This release marks a continuation of your unique worldview. Can you share more about how this project extends your conceptual universe and what fans should look out for?

TRENDZ [Eunil]: If our debut album feels like an epilogue before we even start something, this album is the beginning. In this album, it would be good to guess how to escape the deeper chaos and despair, and what kind of crossroads the members will be at. And it’ll be good to focus on what kind of bird it is that keeps on coming out there! 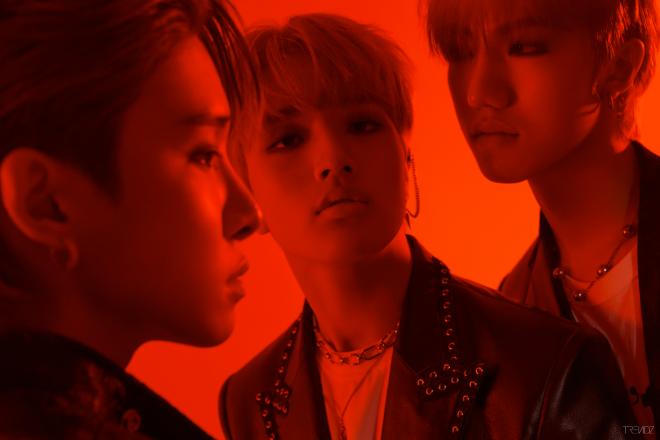 HKP: In what ways do you think you have grown as a group since debuting?

TRENDZ [Leon]: I admit that I’m still lacking even after debuting, but I think I have some time to spare. Overall, I think we’ve grown a lot in terms of expression, physical strength, and speaking publicly, and I think we’re working harder thanks to the support from the fans. 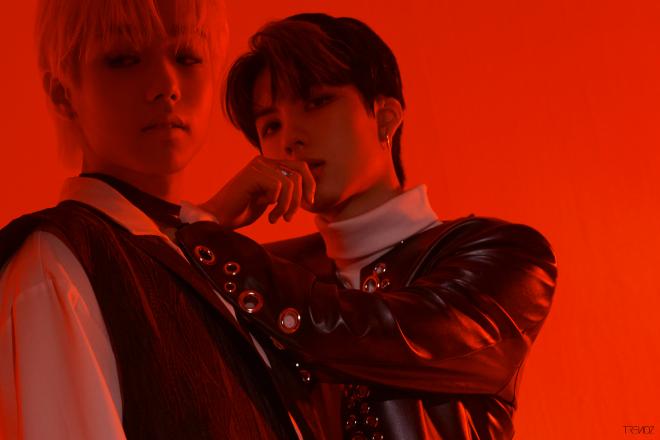 HKP: What has been your favorite memory as a group together so far?

TRENDZ [Ra.L]: I think every moment as a group is a happy one but my favorite memory was when we went on a big stage during the Dream Concert.

We wanted to be remembered as a group with a powerful performance, so we practiced really hard together and since everyone was on the stage as one, I think it was a moment where teamwork and synergy came out well, so it was the happiest and the best memory!

TRENDZ [Yoonwoo]: I think January 5, the day when we debuted, is the best memory. Thinking that we achieved the first goal that everyone wanted together made me really happy and emotional. We will continue to be a group that works hard so that we can make lots of happy memories with our members and Friendz! 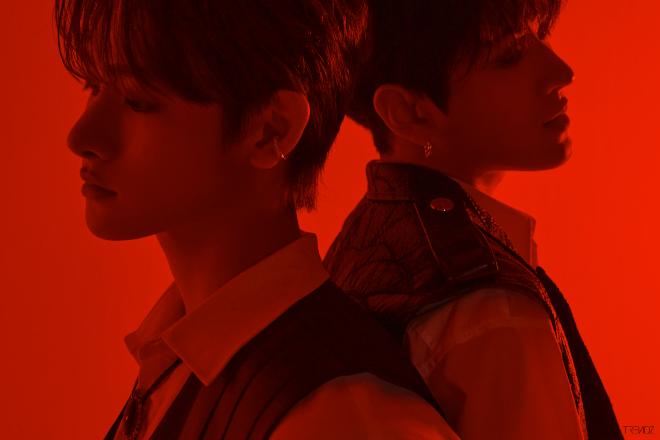 HKP: What music genre or concept would you like to try in the future that you have not yet?

TRENDZ [Eunil]: There’s a song called “Click” in this album and it would have been great if this song became the title song~ “Click” is a very hip song, so I want to try a concept and outfit that can show off the hip hop and bad boy concept.

TRENDZ [Yoonwoo]: Our debut title song, “TNT,” has a very strong concept and the title track, “WHO,” adds a wolfish wildness to its intensity. In the next album, I want to try a sexy concept beyond wildness. I’m confident that it’ll look good on me, so I want to show you!

TRENDZ [Yechan]: I want to try a refreshing concept, too! On stage, we only showed powerful performances. I want to show everyone a completely different side of us. Of course, we’ll look good together, but since I’m the youngest, I think I’ll be able to pull it off the best.

HKP: For newer fans, what do you think is the unique charm of TRENDZ?

TRENDZ [Hankook]: I think the unique charm of TRENDZ is our powerful performance and various chemistry of the members. Our choreography is hard, but all 7 members are good at dancing and expressing their intensity on stage, so I think they are second to none in terms of performance.

All 7 members have different personalities, but it doesn’t feel like anyone stands out. It’s a combination of harmony. I think it’s our team’s unique charm that we all show eye-catching chemistry! 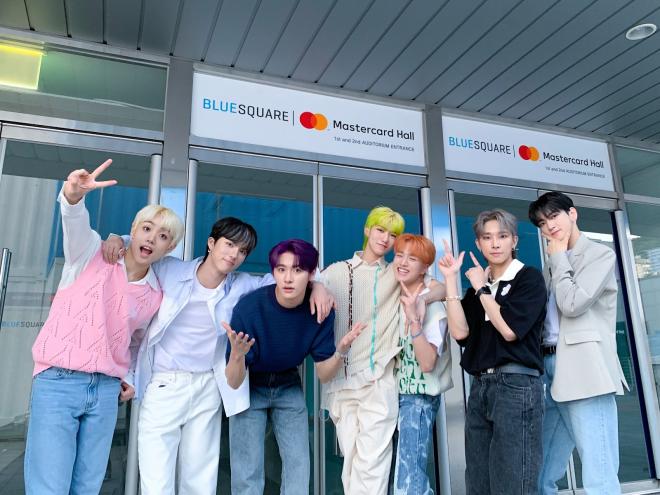 HKP: Can you share what fans can look forward to from TRENDZ in the future?

TRENDZ [Yoonwoo]: But this interview has to come out first… We want to show everyone a new side of us, so there’s something we’re working hard on. We’re doing our very best in practicing because we want to show you other performances besides “WHO,” so please look forward to it!

And we’ll work hard to meet you in various ways in the future, so we hope you will be with TRENDZ even in the future!

HKP: Lastly, please share a message of love for your global fandom, FRIENDZ!

TRENDZ [Havit]: Friendz Friendz!! Thank you for making this promotion special every day! Thanks to Friendz’s support, every performance is new and full of energy, so we can turn up the stage better! The support and love of all the Friendz, even those who are far from us, is also being received! I can’t wait to meet all of you. I miss you a lot and I love you, Friendz!

TRENDZ [Leon]: Hello, Friendz! Your support is our driving force and we are always grateful. I love you. See you all, global Friendz!

TRENDZ [Yoonwoo]: Thanks to Friendz, I’m so happy every day. I think the cheering sound gets louder every time we perform haha I love all the global Friendz and I really want to meet everyone during the overseas tour. There will be a day like that, so please wait a little bit and please know that I always cherish you a lot.

TRENDZ [Hankook]: Hello, Friendz~~ This is Hankook! The love and support of Friendz seem to be constantly well-received by us here and there, 24 hours a day. I’m so happy! I can’t wait to meet friends all over the world. I love you❤️

TRENDZ [Ra.L]: Friendz~ I am grateful that I can spend every day happily because of Friendz! As much as you cheer for us every day, anytime, anywhere, I think we can get a lot of energy and work hard. The happiness and love of TRENDZ, Friendz! I love you~

TRENDZ [Eunil]: Hello~~~ To all Friendz who always shower us with love and support! Thank you so so much. Because of Friendz, we are happy every day and we receive energy. We’ll work harder to show you better performances in the future! Please look forward to TRENDZ!

TRENDZ [Yechan]: Thank you so much for always supporting and giving us lots of love, Friendz! We will do our best to repay your love and support so you’re going to watch us until the end, right??!!! I love you so so much❤️ Let’s see each other for a long time😆~~~