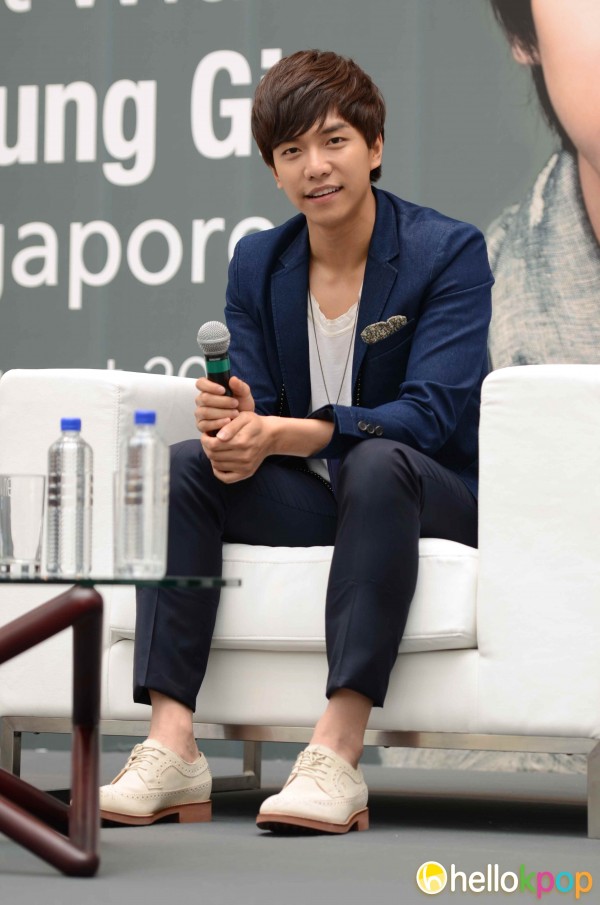 For the first time, fans are offered the special opportunity to join in the official media conference, and with Lee Seung Gi. Fans from all over the globe came for the open press conference. Apart from local fans, there were also fans from neighboring Asian countries such as Malaysia, Indonesia, Japan, Korea, Thailand, Philippines, Taiwan, China and Hong Kong. 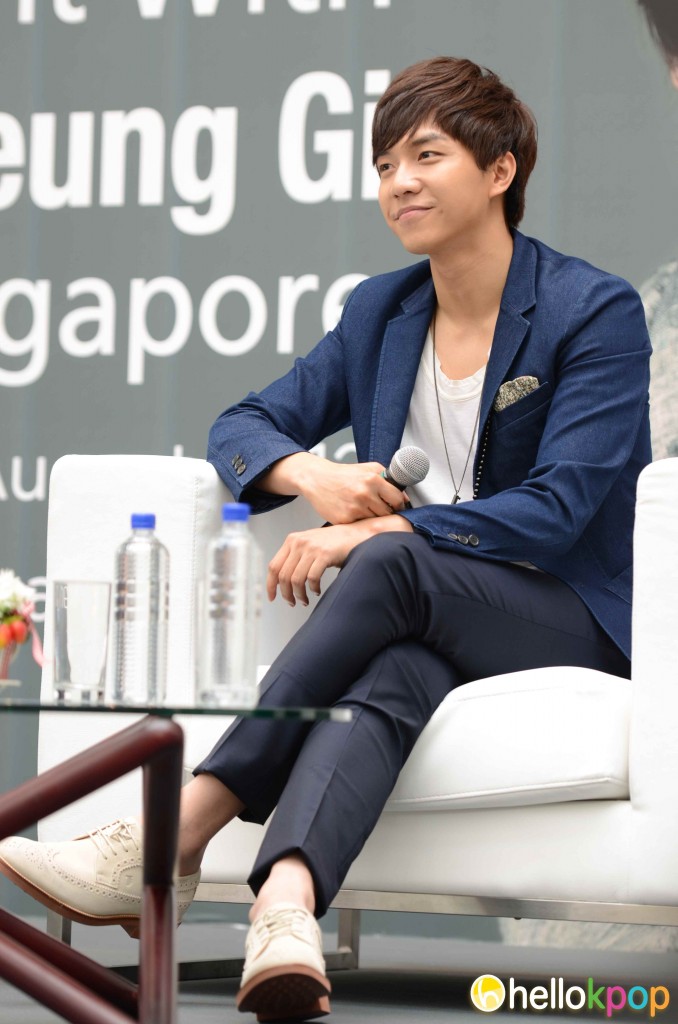 Lee started the press conference by greeting the crowd and thanked them sincerely for coming here from all different places. Throughout the 50-minute press conference, Lee Seung Gi brought an unbelievable amount of laughter to the crowd. Along with his witty and warm personality, he has certainly melted hearts of many female fans with his signature prince charming smile. 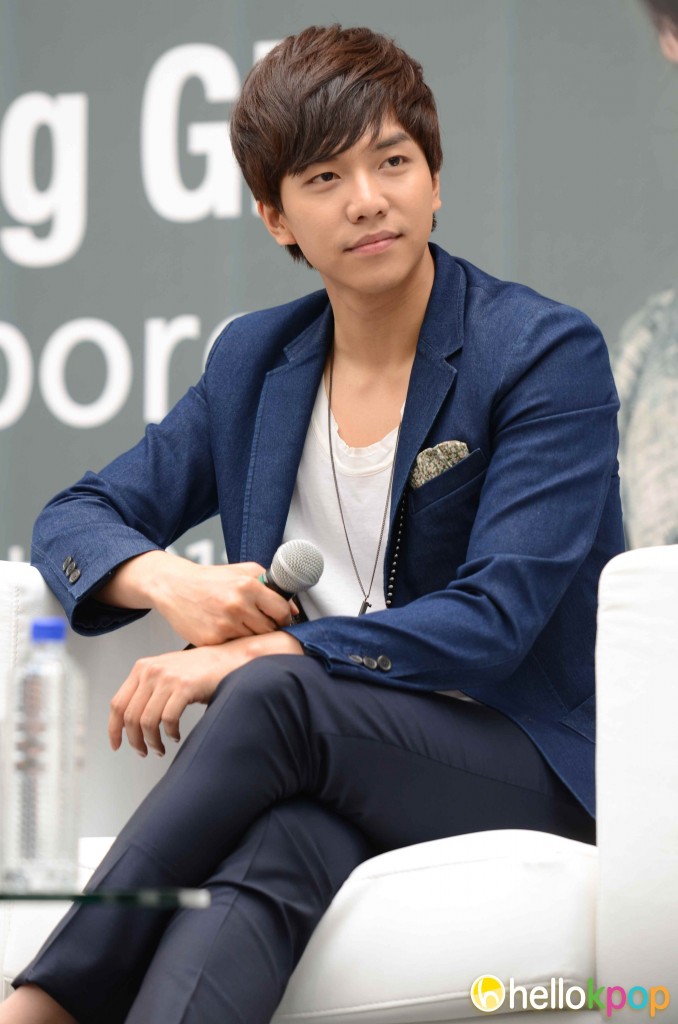 Lee revealed that if everything goes smoothly, his next new album will be out by the end of this year. On top of that, he also confirmed that he will be having a year-end concert on 1st and 2nd of December in Seoul.

Check out the following Q & A session, held between Lee Seung Gi, the MC and the press.

Q: Since this is your first time in Singapore, how do you find the scenery and what do you think about Singapore fans?

A: I feel that Singapore is a very clean city, a nice place to live in! I also have heard there is a very famous dish called, Black Pepper Crab? He continued, “I’m thankful that so many fans came to the airport, I would like to thank them for all the passion and caring!

Q: I’ve heard that you have prepared something special for the Singapore fans, is that true?

A: Since this is my first time in Singapore, I have prepared many conversations with them and performances to be shown tomorrow.

Q: How do you feel about being good in everything (as a MC, actor, singer) you do?

Q: Since you sing, you act and you host, how do you manage your time along with your studies?

A: I think I’ve gotten myself too many things and now that I’m starting to regret. Although it gets too tired, I enjoy learning new things.

Q: Do dramas that you play tend to be rebellious then it turns out good? Underneath your perfect and character, what is the most rebellious thing that you ever done?

A: It is very nice to hear people think that I’m perfect. I believe so far there isn’t a perfect character that I have performed and of all the 3 different roles I played, there isn’t any way to point out any of them are the best.

Q: Do you have any special habits that we don’t know?

A: I do have the habit of gathering all the nice and interesting, mainly good things together. I don’t like serious atmosphere.

Q: I can understand your appeal to the younger crowd but there are also many here of other age groups as well. So what do you think that you have that also appealed to the older crowd, and what is the craziest thing that the older female fans had done for you?

A: Older fans are actually very polite so I have never encounter any problem with them before and I think that my appeal to them is because of my smile?

A: Usually, I hardly gets angry. But I will get very angry when I don’t get enough food.

Q: Do you think you are a romantic lover?

Q: Would you use the lyrics of a recent song “Love Time” to confess to a girl in real life?

A: The lyrics contains a lot of my thoughts on dating and personal feelings. There’s lyric inside saying, ”I’ll love you more than your previous boyfriend.” That’s how I wanted to show my feelings to her.

Q. What is the most romantic stuff that you have did to your girlfriend?

A: Currently I don’t have a girlfriend, so I can only plan what I will be able to do for her in the future. I would like to cook for her, that’s why I’m learning how to cook.

Q. What particular role you would like to take up in drama?

Q. How would you relieve stress?

A: Since I like to go to gym, I exercise a lot. Soccer will be one of the sports that I play.

A: Maybe an age gap up to 10 years? Not exactly 10 years. Age don’t really matters, as long as I’m comfortable with her. Communicate is important too.

Q. What kind of activity or interest would you like to take up on? For example like diving?

A: I’ve a fear of heights so I’m afraid that I can’t take up anything relating to that. Be it sports or other activities, I would keep myself busy.

Q. When do you feel most fearful and the most fearless?

A: I’m scared of ghosts.
(At this moment, the MC mentioned that it’s currently the Lunar 7th month in Singapore (In the Chinese calender, it’s known as the Ghost Month) and Lee replied that he had to go back to Korea immediately. MC continued by advising Lee Seung Gi to head back to hotel earlier, causing much laughter from the crowd.)

(Continued..) When comes to work, I feel the most fearless…

Q. Other than the roles you have experienced, what other things that you would like to try in the entertainment sector?

A: Something that I have yet to try would be to take part and act in a movie.

Q. Is there a favorite toy, comic character you like when you were young?

A: Dooly. Dooly is a very famous character in Korea. He is a dinosaur which is green in color.

Q. Do you still keep your toys?

A: I prefer gadgets more than toys that appeared in the cartoons. For example in Batman, I would preferred having the Batman car instead.

Q. When did you start to learn how to cook?

A: I figure out that I do not know how to cook during 2D1N, and that’s when I started learning from the experts.

Q. What is your best dish you think you can cook?

A: The most comfortable and confident dish I think I can cook is Pasta.

Q. Would you like to learn how to cook Singapore dishes?

A: It would be great if I get the chance to learn how to cook Singapore dishes! 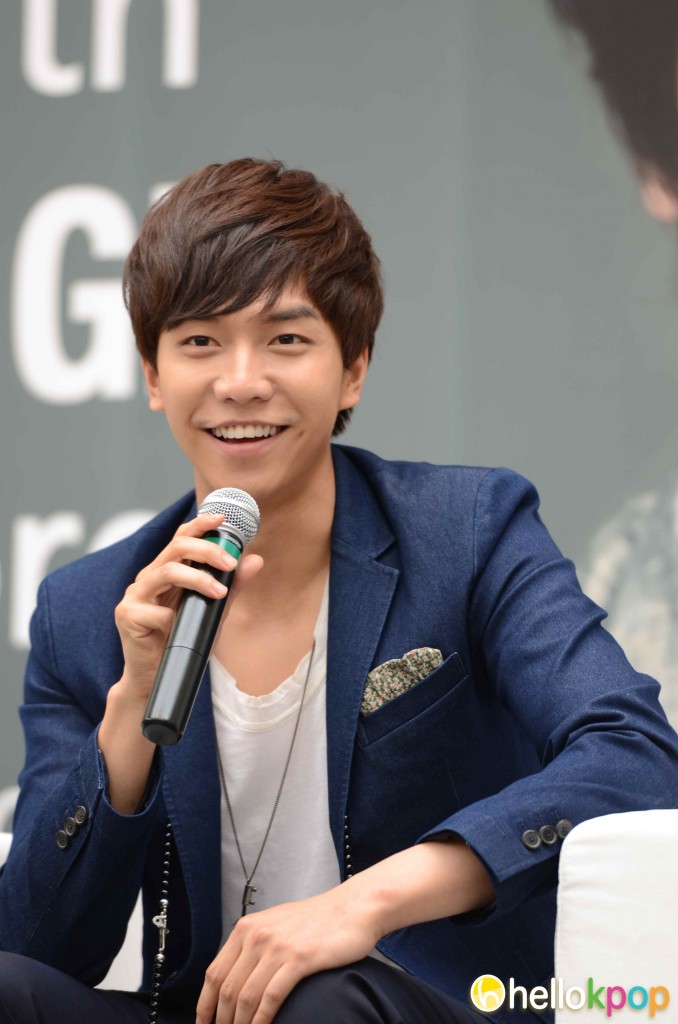 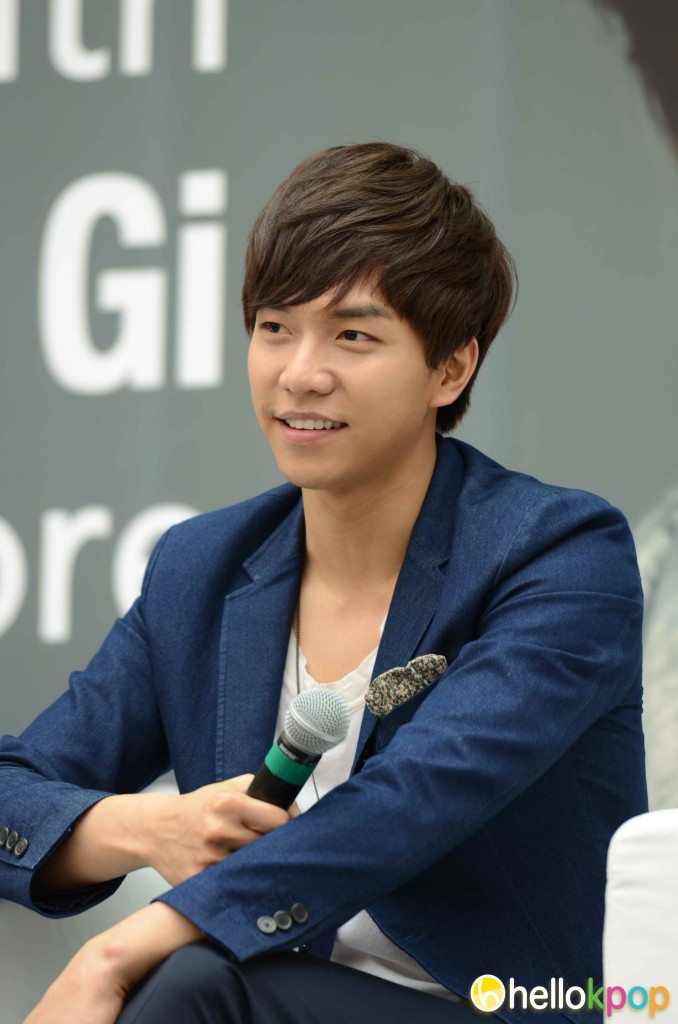 Before coming to the end of the press conference, three randomly-picked fans are each given a rare chance to say something to Lee Seung Gi. Congratulations to the 3 Airens who are fortunate to be able to express their support to their prince directly!

hellokpop would like to express special thanks to Faith & D Entertainment and Hook Entertainment for organizing and giving us the opportunity to cover this event!