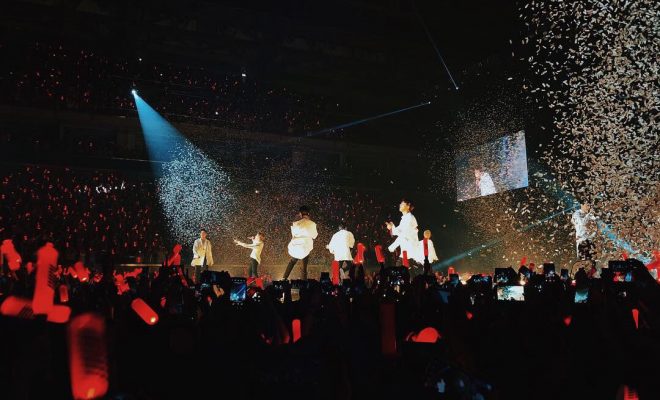 With energy high, performances on point, and KonBats red and up, iKON and PH iKONICs turned SM Mall of Asia Arena into party ground at the 2018 CONTINUE Tour in Manila!

Everyone inside the venue were high with energy and enthusiasm even before the lights went off to signal the start of the highly anticipated iKON 2018 CONTINUE Tour in Manila. And when B.I, Bobby, Jinhwan, Junhoe, Donghyuk, Yunhyeong, and Chanwoo entered the stage, dazzling in red, thunderous screams filled the arena.

The boys kicked off their first ever solo concert in the country with “Bling Bling” and “Sinosijak” before getting their rhythms up and wild in “Rhythm Ta”. 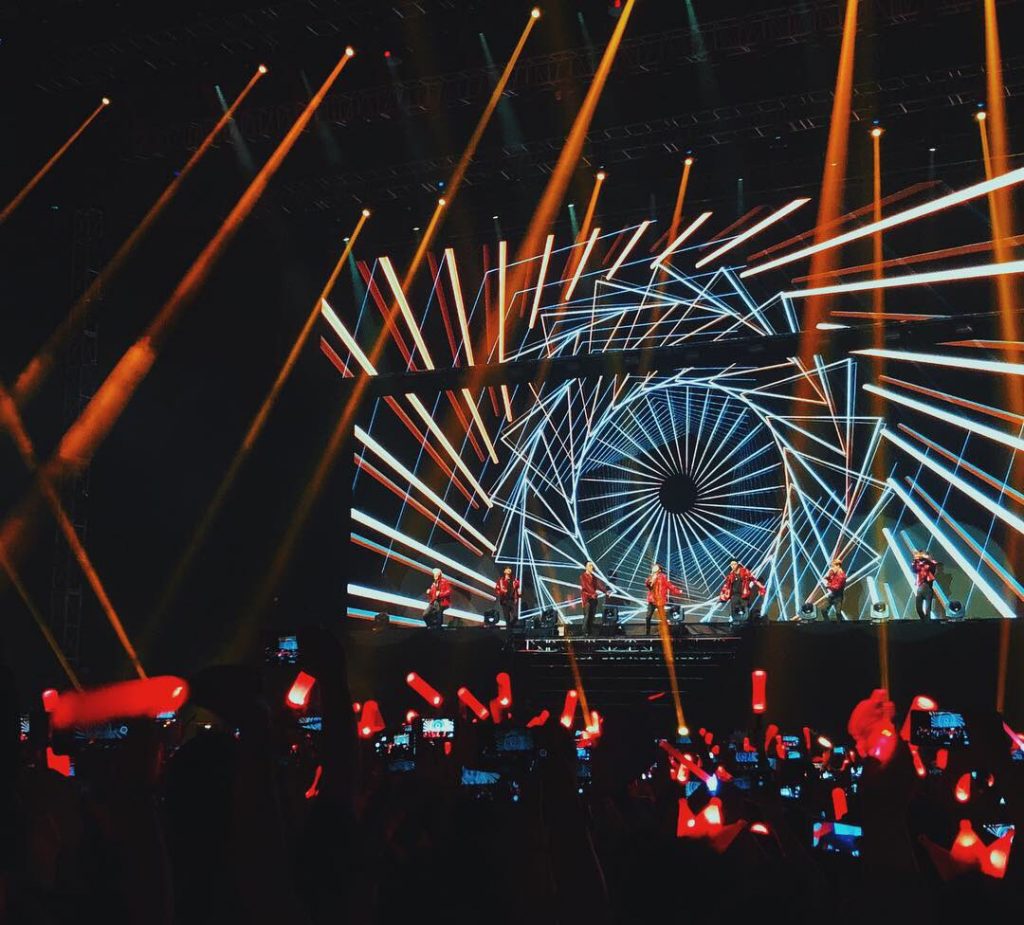 Pausing for short ment, Jinhwan, who stayed in the Philippine for seven months during his high school days, reminisced his days in Davao where he boasted his popularity. He also considers Philippines as his second home, remarking that he has a lot of fond memories of the country.

The members also encouraged the fans to enjoy the show with Bobby urging the fans at the standing area to take steps back and avoid pushing. “Imma need you to step back a little bit from the back please. No pushing. Calm down. We are going nowhere. Step back a little bit please. We can’t do the show. If you guys get hurt, we can’t,” he said, emphasizing that the fans’ safety comes first before they move forward.

With everyone more collected, iKON brought island life inside the venue with refreshing performances of “Cocktail” and “Only You”. 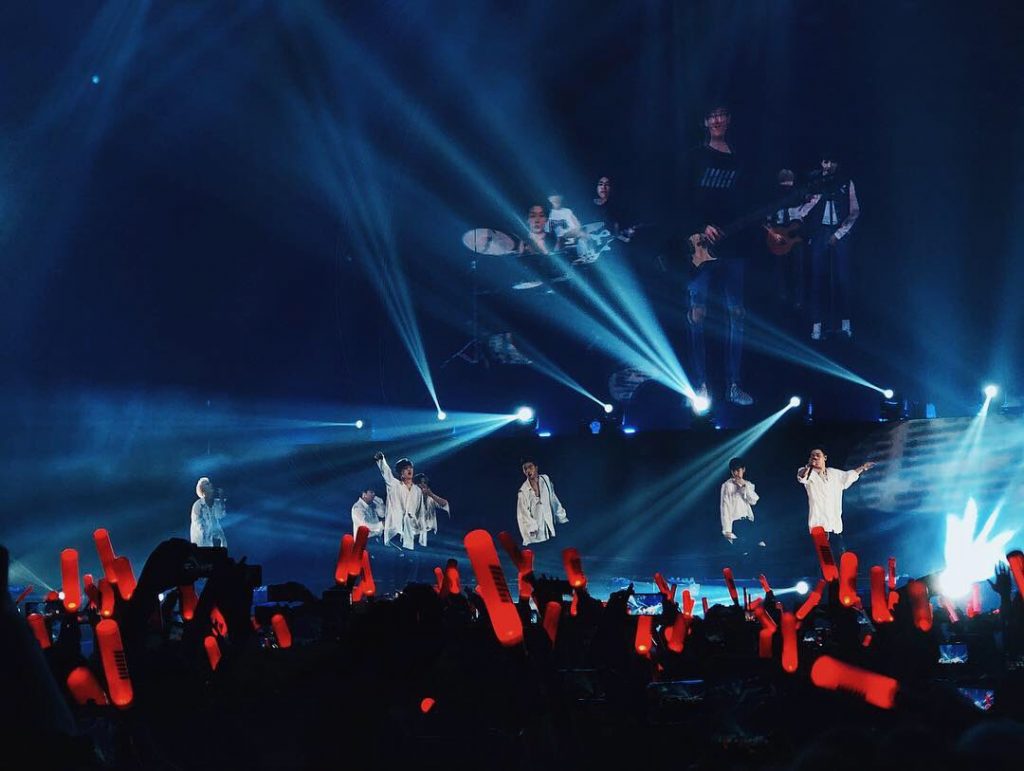 Double B took the stage for the ment, while the vocal line prep for the next stages. Bobby acknowledged the presence of B.I’s mother and sister Hanbyul who came to support the boy group’s first solo concert in Manila. Asked how he felt knowing his family is watching, B.I said he wants to do better.

Bobby and B.I don their competitive spirits into action through a game with PH iKONICs. Dividing the crowd into Team A and Team B, the two idols tested which group can sing their chart-topping track “Love Scenario” the loudest. Bobby took on the penalty of expressing his love to fans without a mic on. And with a loud and clear voice, the rapper’s saranghae echoed across the venue.

Still intoxicated with love from Bobby’s saranghae, Jinhwan, Junhoe, Donghyuk, Yunhyeong, and Chanwoo did not give PH iKONICs the time to recover as they sweetly serenade fans with “Perfect”.

Bobby made fans swoon with his solo performance of “Love and Fall (Tendae)”, impressing with his vocals and rap. B.I got the crowd gape in amazement as his charisma emanate through the stage in “One and Only”. 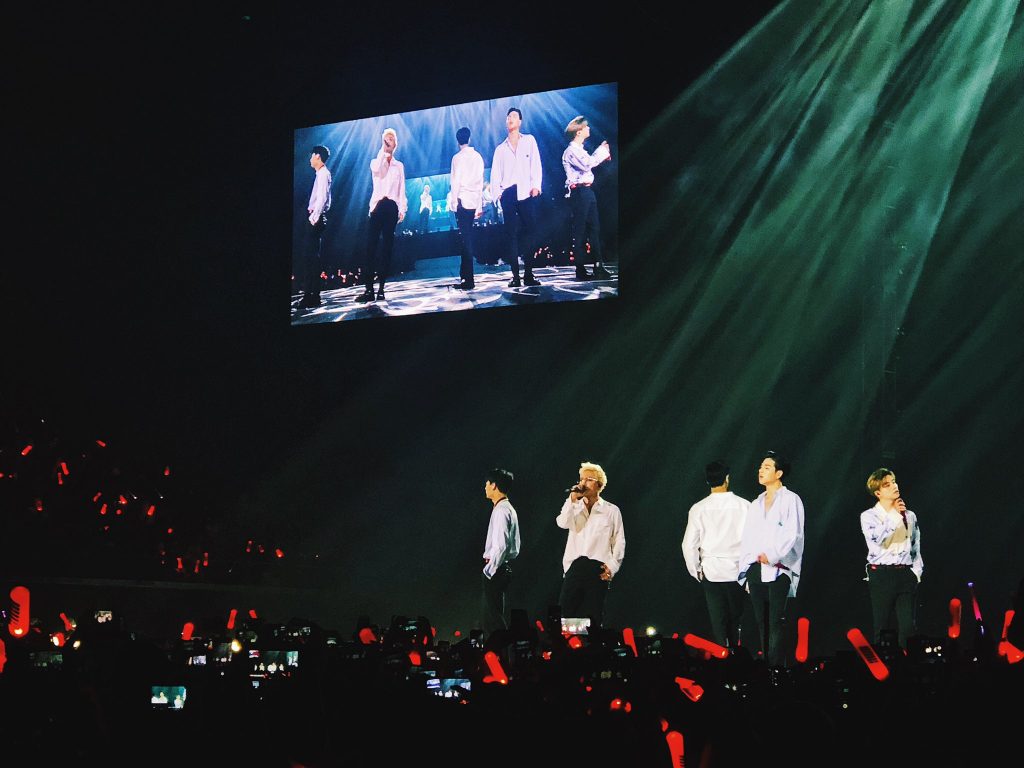 Bobby joined B.I on stage for “Anthem” before reuniting with the rest of the members in “B-DAY” where SM Mall of Asia Arena witnessed colors yellow and red up in the air. Along with the bright red lights of KonBats, PH iKONICs prepared yellow fabrics to raise during the song.

After a VCR, the venue was filled with nostalgia when iKON performed its debut song “My Type” which was followed by a playful stage of “Rubber Band”.

During the ment, the members shared what they have done this year. Bobby said they have improved a lot this year, while Jinhwan said he worked hard on his vocals, giving a snippet of “Goodbye Road” as proof. Yunhyeong said he worked on his face which is now better looking than Jinhwan which the latter objected. Meanwhile, Junhoe, who improved on his body this year, shared the fruit of his hard work to fans. Youngest member Chanwoo also showed his muscular arms which was met with “wow” from fans. 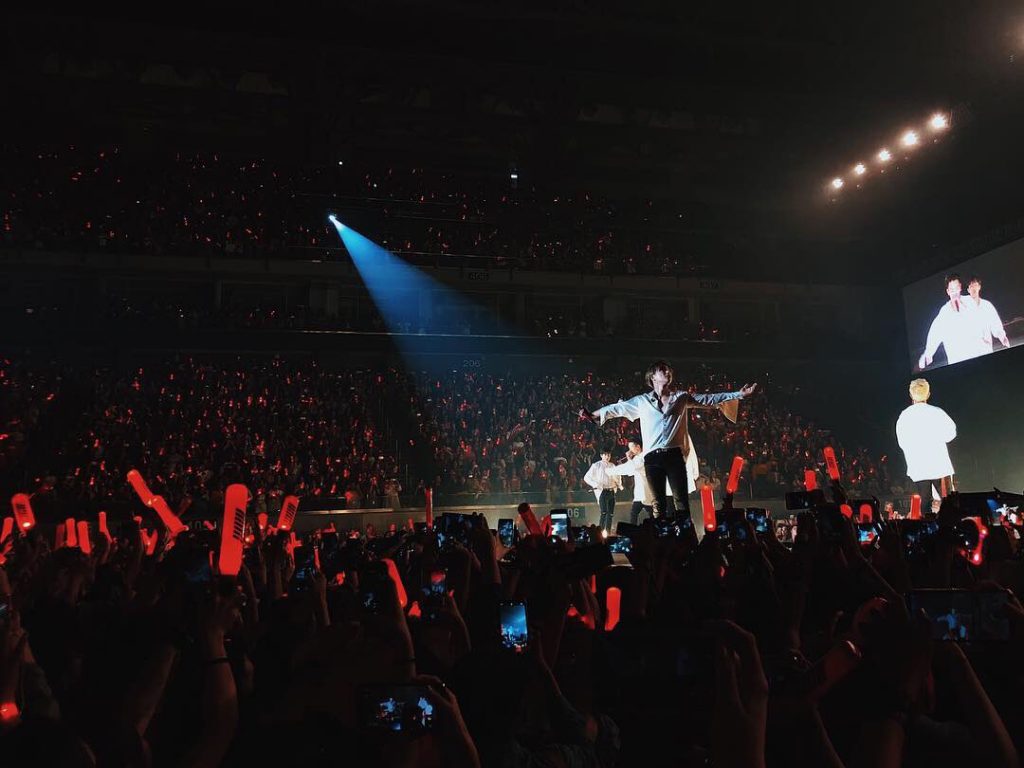 Pairing up for their “Best Friend” stage, the boys, sans Jinhwan who was left without a partner, showcased cute couple dance before unicorn Jinhwan took the spotlight with adorable and seductive dance moves on center stage. The display of charm went on in their “Everything” stage.

A special VCR was played showing the success and influence of iKON’s greatest hit “Love Scenario” which took South Korea and the rest of the world by storm when it was released in January. The addictive melody, easy-to-follow lyrics, and cute dance moves created the perfect formula that got people from nursery to old age dancing and singing along. And lucky fans at the SM Mall of Asia Arena witnessed the first live performance of “Love Scenario” in the Philippines, as well as, the boy group’s latest release “Goodbye Road”.

“Time flies so fast,” said Jinhwan during the ment before the boy group’s performances of “Killing Me” and “Goodbye Road”. He expressed his happiness to be in Manila for the first time as iKON, and coming back to the Philippines after a long time. “It’s good to be back here. I really want to come to the Philippines, and now, we are here,” he said. 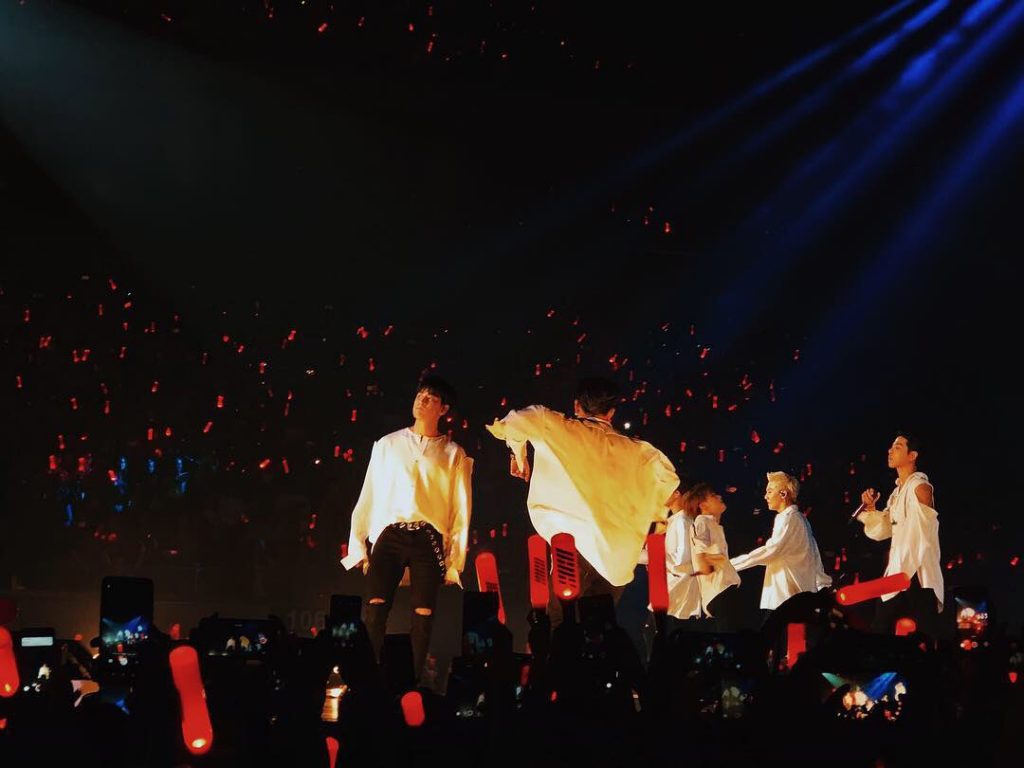 Aside from welcoming iKON with a full house concert, painting the arena with their fandom colors, and enthusiastically partying with the members, PH iKONICs made sure the boys will leave Manila with a lot of good memories.

Setting their KonBats aside for a while, fans lighted the arena with colors of the rainbow using their cellphones’ lights and raised banners to show their love and support for B.I, Bobby, Jinhwan, Junhoe, Donghyuk, Yunhyeong, and Chanwoo.

Amid the rainbow lights, iKON treated fans with “Just For You”, “Love Scenario”, and “Don’t Let Me Know”. “We are freaking, freaking happy,” Bobby said during the ending ment. Jinhwan once again expressed his gratitude to fans saying, “I really appreciate you, guys.” He added that he fell deeper and deeper in love with Manila through the concert. 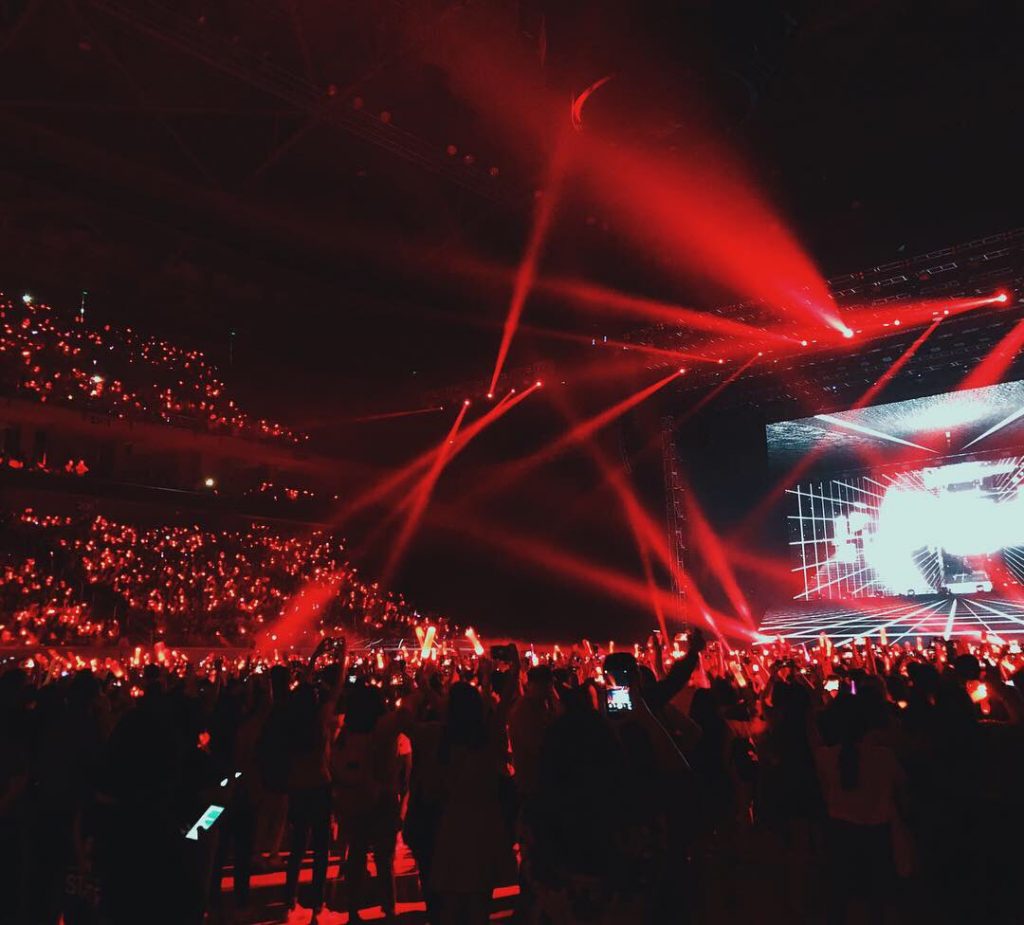 Concluding the night, the members performed “Dumb and Dumber”. And with fans’ hot and energetic cheers, iKON added another song, “B-DAY”, to the encore stage before officially bidding goodbye to PH iKONICs.

BLAZING RED ? #iKON and PH iKONICs turned SM MOA Arena stage into a party place with their thrilling and fiery performances and loud and energetic cheers at the "2018 CONTINUE Tour" in Manila!

The color was red. The energy was limitless. The performances were superb. And iKON 2018 CONTINUE Tour in Manila was the biggest and wildest K-Pop party in the history of Philippine K-Pop concert.

With the thunderous cheers, brightest lights, and the ground shaking as proofs, iKON and PH iKONICs did not hold back in making the night memorable and historic for each other.

What a beautiful ocean tonight at the #iKONinManila ? We told you — PH iKONICs are going to paint SM MOA Arena red tonight!