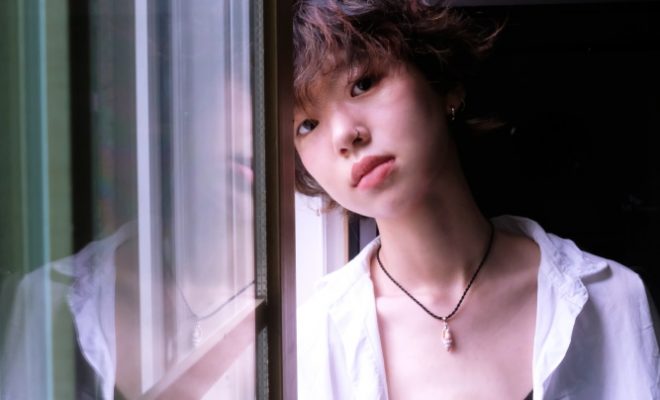 [INTERVIEW] Yoon Ji Young on “Shame”, Change and Fate, and Being a ‘Cyber Singer’

With a penchant for inventive melodies and concise yet thoughtful lyricism, Yoon Ji Young has been building a strong discography since 2017. Her music so often exudes magnetic appeal, inviting the listener to ease into the groove and ride into its sometimes pastoral, sometimes intrepid soundscapes.

The artist also has a quirky streak: for example, one of Yoon Ji Young’s newly established nicknames is “the cyber singer”, stemming from both her relative dearth of offline activities as well as the maverick mix of video content in her music videos and YouTube channel (sometimes directly reminiscent of the actual Cyberstar Adam).

Yoon Ji Young’s latest single, “부끄럽네 (Shame)”, was another meaningful step as the artist now prepares for the first album of her career. Hellokpop spoke with Yoon Ji Young about this June single, as well as on the themes and character of her budding career.

HKP: Your new single “Shame” was released in June. What kind of song is it?
Yoon: It’s a song about the embarrassment you feel when love comes to an end. After it’s over, the words you said and promises you made while in love sometimes seem funny, right.

HKP: Even though it’s singing about parting, it’s more resigned than explicitly sad. The titular “shame” also seems closer to a disappointed sheepishness than it is to intense regret.
Yoon: Yes, I think it’s closer to emptiness and resignation about this relationship ending, rather than a sorrow in parting. It feels stuffy, too. It has that vague sheepishness, so I also used a beat that’s only kind of exciting to create an embarrassed mood.

HKP: Park Moonchi handled the arrangement on “Shame”, but the calm analog sound here seems close to the style you already have. Curious to know how the direction of arrangement took shape.
Yoon: I had actually finished the arrangement and it was being mixed, but that half-baked excitement I wanted wasn’t really coming out well. And the person who could do that well for me was Moonchi unnie. She understood me well too, so I’d just throw something out there and she would stack up several things based on that. It was her filling up the song, and then me cutting it back.

HKP: I did just say “the style you already had”, but then again, each single you’ve released contains new sounds. There are piano-driven songs like “Dream”, as well as “Eternal” or “A Will” which make active use of guitars, in refreshing and moody ways respectively. Do you tend to experiment a lot as you write music?
Yoon: I don’t think I’ve worked with a set goal to trying something new. I think it’s rather because I didn’t have any set notions like “This is what I have to do” that each song came out with a different feel. At one point I was confused myself because they were so different, but now I think that’s just who I am.

HKP: Your melodies are also never predictable, progressing in distinct ways. I’m curious if you tend to take the melody you first come up with all the way to completion.
Yoon: Melodies stay the way I first write them. It’s the arrangement that changes a lot. I ponder a lot about arrangement and make lots of changes, but I think when it comes to melody, the stuff I toss out at the beginning tend to be more fun.

HKP: In talking about your music, we’d be remiss not to mention your conversational, unadorned singing style. Listening to your earliest work like “Shade” and “Dream” again, I don’t get as much of that feel as in your current work. Have you adapted your style to be a bit more relaxed since then, by any chance?
Yoon: Hm… Part of it is that my voice has matured, but the biggest reason is! Back then I was really just getting started, so I just didn’t know how I should sing. It’s a little awkward to listen again, but I don’t think it’s necessarily good or bad. I think that’s just showing how I was back then.

HKP: Including “Shame”, your songs often seem to be about change. Changing hearts, things that pass us by or can’t be held onto. These are recurring themes so I wondered if you think a lot about these topics normally.
Yoon: That’s right. Not just me, but whenever I talk to people I find they’re all thinking deeply about some kind of truth. I spend most of my time seeking things like relationship and foreverness. It’ll be the task of a lifetime, I suppose.

HKP: On the other hand: “Wwwe”, which Hellokpop picked to our list of the best pop and ballad singles of 2019, sings about love that’s so certain and inevitable, that you could walk backwards from far away and still end up together. Where did you find inspiration?
Yoon: When you’re in love, even people who don’t believe in destiny have moments that they want to believe are fated, right. I was like that too. I thought it wasn’t real love if it didn’t feel like that. Ultimately, it must be our choices that “create” moments that seem like fate, but I still wanted to believe that it was destiny, like a movie script.

HKP: You’re also consistently appearing in your own music videos. Is there any particularly memorable filming?
Yoon: The filming of “Wwwe”. It was crazy cold, and there was a sudden rush of sea fog so you couldn’t even see a meter ahead. It was dangerous because you couldn’t see anyone that was even a short distance away, but thanks to that we got some surreal scenes too.

HKP: On top of the music videos, you’ve also been releasing a bonus video on YouTube for each song since “Wwwe”. It kind of feels like a supplement. I’m curious how you got started and how you think of the ideas each time.
Yoon: I as well as my friends who do this with me put a lot of emphasis on having fun. And these are singles, so I also feel really empty after releasing each one. So while we’re hanging out and chatting, whenever a fun idea comes up, we make sure to do it. “You can do it if you try!” is the mantra we always say.

HKP: Thanks to your active online presence, you’ve gained this fun identity of being a “cyber singer”. If the focus is on the inability to interact offline, though, basically all Korean musicians might seem like cyber singers to international listeners. In the midst of that, what might be a distinguishing charm that sets Yoon Ji Young apart?
Yoon: I think the stuff that I make purely based on my own preference might strike others as refreshing. I like things that clash, things that make you go “What is this…?” Maybe it’s the fun that comes from something that seems strange at first, but grows familiar over time.

HKP: As you’ve been releasing singles at consistent pace, I’m looking forward to your next step. Lastly, tell us what’s in store going forward!
Yoon: I want to work on things that gain synergy from many people. Even if isn’t music, I find it fun to work with people from various fields. And my goal for the rest of this year is to release an album, not just a single. Thank you for reading.

You can follow Yoon Ji Young on the following platforms:

FacebookTwitter
SubscribeGoogleWhatsappPinterestDiggRedditStumbleuponVkWeiboPocketTumblrMailMeneameOdnoklassniki
Hellokpop, as an independent Korean entertainment news website (without influence from any agency or corporation), we need your support! If you have enjoyed our work, consider to support us with a one-time or recurring donation from as low as US$5 to keep our site going! Donate securely below via Stripe, Paypal, Apple Pay or Google Wallet.
Related ItemsMagic Strawberry SoundShameYoon Ji-young부끄럽네윤지영
← Previous Story ENOi Reveals August Comeback Plans Through Surprise Timetable & Unleashes First Photo Teaser
Next Story → Jo In Sung Dons FENDI’s Leisure Wear, To Bare Insightful Thoughts For Harper’s Bazaar 24th Anniversary Issue