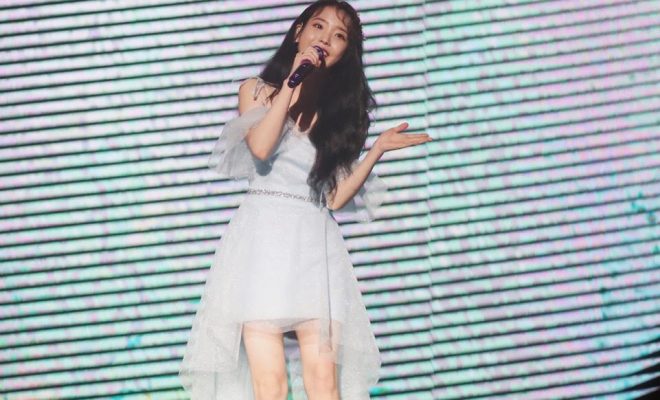 At the last stop of her concert tour, IU swooned the crowd with her scintillating music and fans still can’t get enough of the experience!

On December 28, IU met her Indonesian fans for the first time. Indonesian UAENAs packed the Tennis Indoor Senayan to witness their darling songstress perform in front of their very eyes. 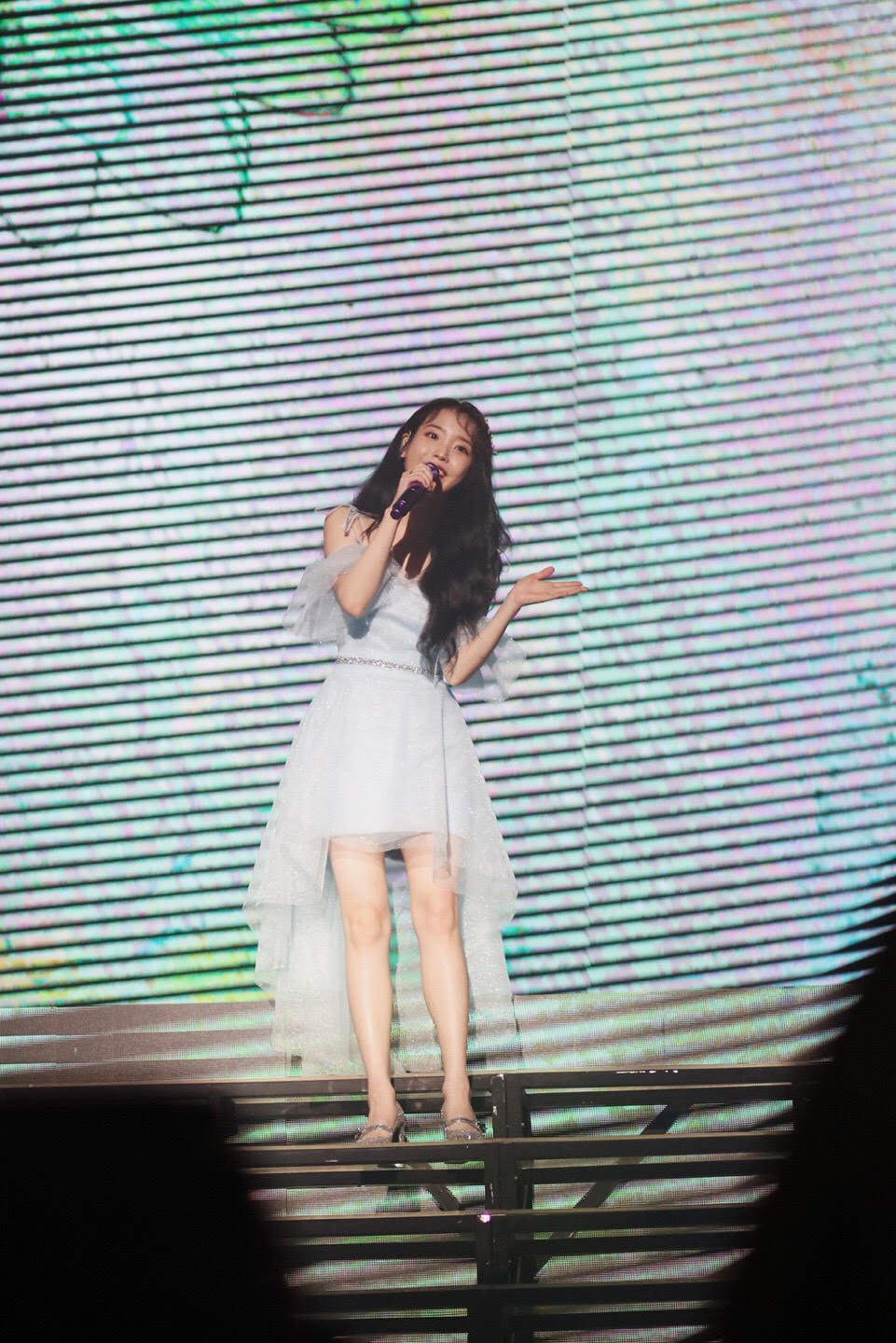 On the 2nd day of her two-day concert, Korea’s sweetheart elevated the mood as soon as she came up the stage. The audience was greeted by IU with an opening instrumental matching floral graphics on the LED background screen.

Looking sophisticated on her pink flowy glittery dress and with her hair tied up neatly like a princess, IU began to serenade the audience with “Unlucky”.

A large number of fanboys were screaming praises mesmerized by her cute visual.

Moving on to the second song,  IU sang “Palette” in an acoustic version. Notably, IU danced around while her supporters sang together with her during the number.

Before going to the third song, IU took time to chat with her audience. She mostly talked in Korean, but a translator will later convert it to Bahasa.

IU greeted the crowd with “Halo… Apa Kabar? Saya IU” in a very cute way that made everyone swoon. Surprisingly, she even pronounced Bahasa correctly like a local.

Responding to a Jakarta fan who commented on her Instagram, IU revealed her reasons for including Indonesia in one of her stops. Momentarily, the lucky person she was talking about was flashed on the screen, holding a printed conversation she had with IU.

Touched with once in a lifetime experience, the fan shed tears while IU comforted her saying in Bahasa “Jangan Nangis”.  Amazed at the singer’s response, the crowd responded warmly to her cute gesture. 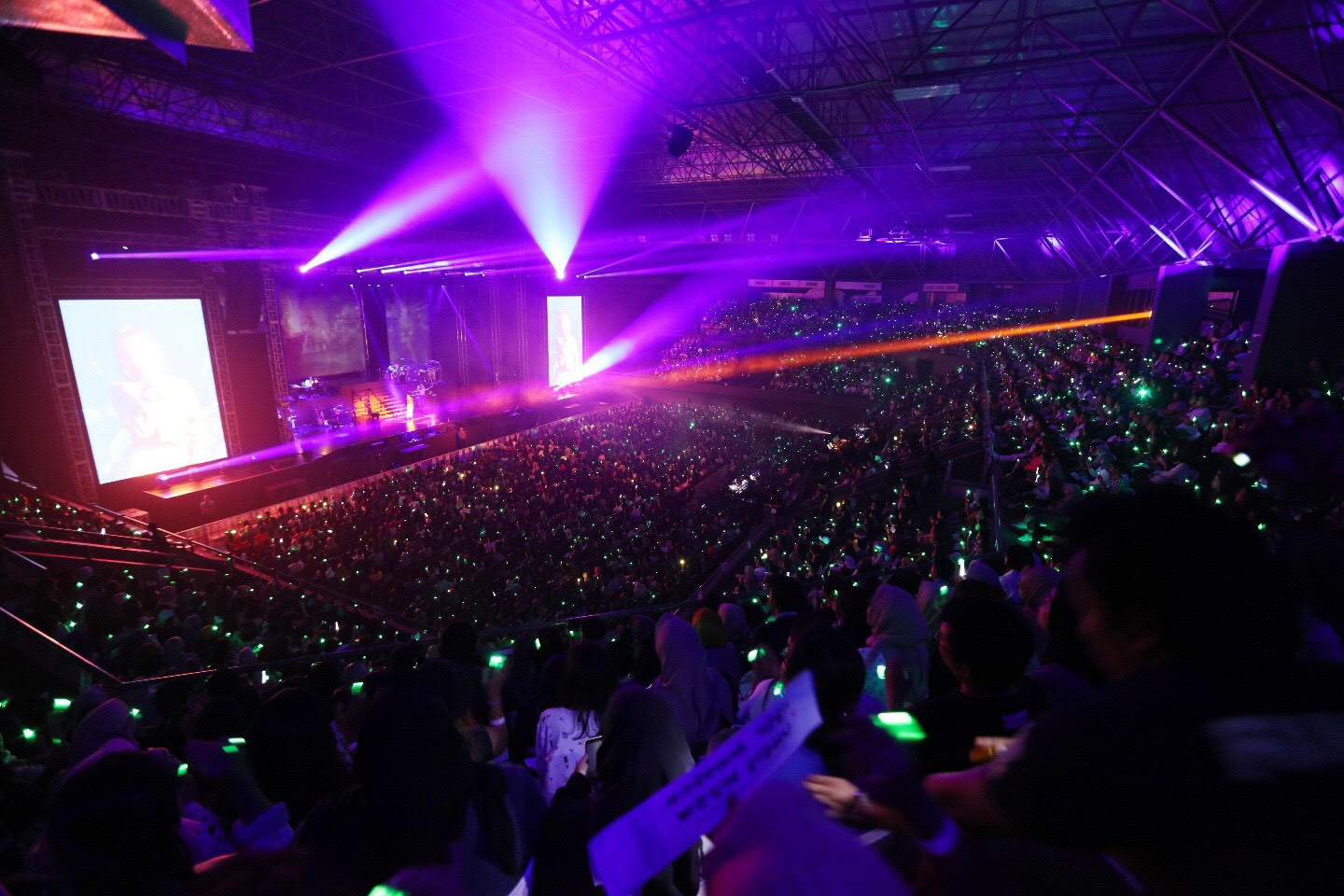 In a black and white setting, IU let the fans experience Autumn vibe with her sweet voice as she sang “Autumn Morning”.

The audience all enjoyed the moment as they waved their hands with a finger light showing a wonderful ocean of lights.

Not breaking the cozy vibe, IU continued on with “Friday”. With the crowd singing along, IU praised the Indonesian fans. She remarkably said it’s hard to adjust to a song when the audience singing along – especially if they go out of tune, but Jakarta UAENAs was one of kind as they sing it perfectly in tune.

In no time, the fans were transported in a fairytale-like forest coupled with raindrop effects as IU hinted another soothing song – “Secret Garden”.

The Wild And Crazy “BBI BBi” and “Hold My Hand” Moment

After a short break, IU came back on the stage completely garbed in an R&B style with hoop earrings, cropped hoodie, ripped jeans and boots.

The fans felt the jazzy vibe even more as she performed “The Visitor” with a guitar accompaniment.

In a more energetic vibe, IU performed “Jam Jam Jam” and “23” as the audience filled the hall with deafening cheers.

The crowd went wilder on the “BBI BBI” stage and chanted “AI YU” even more loudly until the end of the song. Stunned with the crowd, IU mentioned “Mantap! Gokil! Mantul” which means “Jjang” in Korean or “The Best”.

Then she joked with the crowd, ” You are not teaching me bad words right?” doubting that “mantul” may mean an explicit word.

Moving on to another fan-favorite “Hold My Hand”, the crowd was chanting altogether “Jigeum Nae Soneul Jabah”, making it one of the highlights of the night.

Riding the momentum with “Last Night Story” from Flower Bookmark album, IU made a special performance specifically for the Jakarta stop.

Since this is her final stop for her concert tour, her equally famous manager brought an unexpected performance as he danced along with IU’s back-up dancers.

IU was once again astounded by the Jakarta fans with their improvised freestyle chant. which sounded like an army chant. In her ment, she revealed that her manager looked strict and stiff so she wanted him to let loose to entertain her fans.

At the onset, as the crowd came up their seats, they were welcomed with a pack of IU goodies – IU’s mask, a flag banner, finger light, and IU postcard.

The masked should be worn during “Blueming” stage while holding the flag banner with “Millions of roses are Blueming in Jakarta too” written in Hangeul.

As soon as IU saw people wearing her mask, she burst out in waves of laughter in the beginning of the song. Although the music continues, she tried to keep up singing even though she cannot contain her happiness. 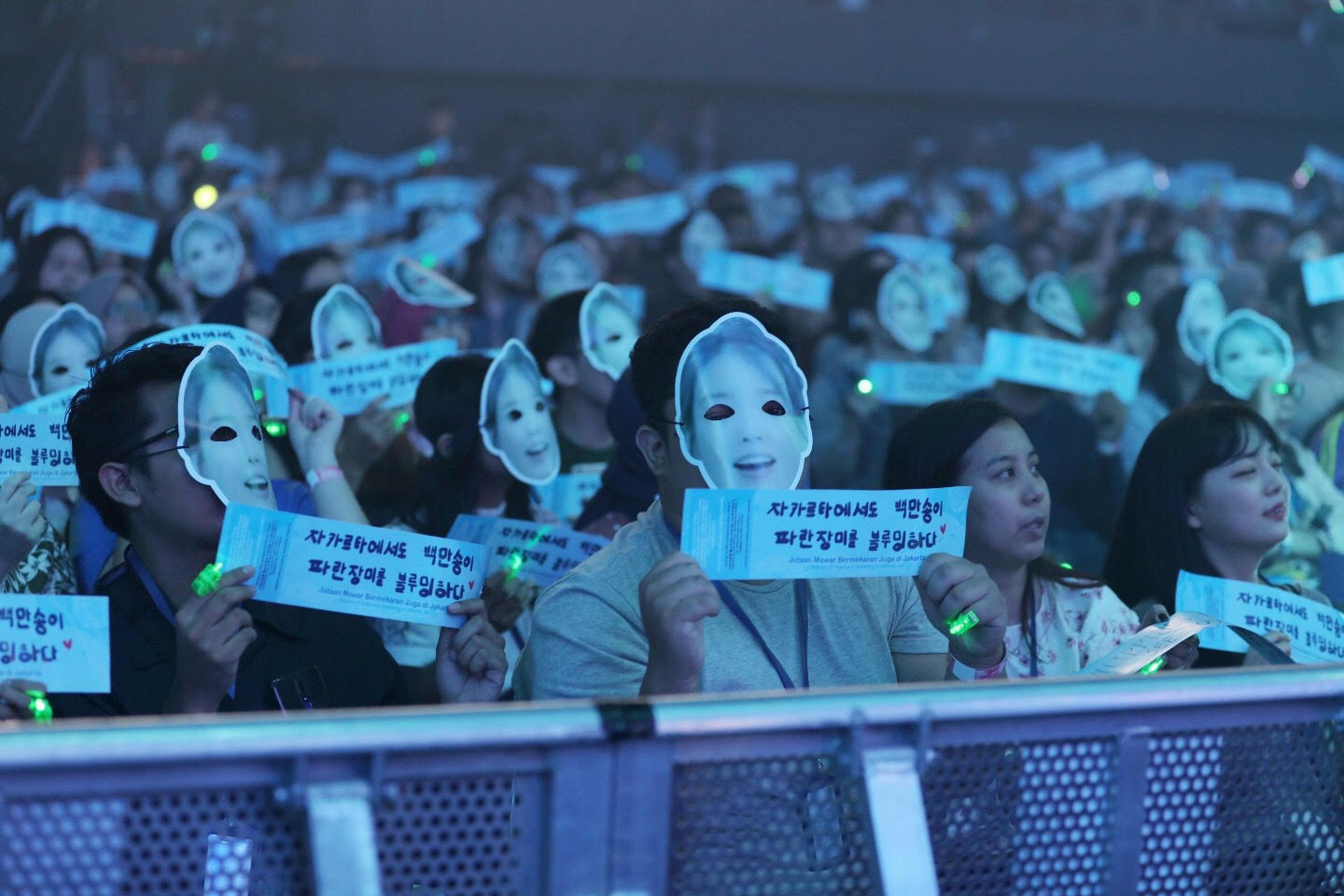 During her costume change, the crowd was entertained with a short video about the special persons in IU’s life – her mother, grandpa, and grandma.

Afterwhich, IU showed up in a white elegant dress with her hair tied up in a bun surrounded with a little sparkly diamond-like accent.

A moment after, the crowd was brought into a Hotel Del Luna experience. She mentioned she is not singing as IU but as the iconic Jang Man Wol.

Loving the moment, the audience screamed “Sajangnim Saranghae”. IU gifted her fans with three soundtracks from the drama while showing some favorite clips of Jang Man Wol on the screen.

The audience sang along to the medley of “Lean on Me”, “A Poem titled You”, and “Can You See My Heart”.

After this session, IU bonded with her fans taking the time to talk about the fan project. She mentioned, the mask looked hilarious but a bit scary too. She added, that in this concert tour, fans will always make surprises in “Blueming” song.

Ultimately, she mentioned she already had prepared a dance version to be performed first in Jakarta but she was blown away with the fan-project.

Since Jakarta loves her latest drama, Hotel Del Luna, she promised to bring in the casts to the city and hinting for a fan meeting. 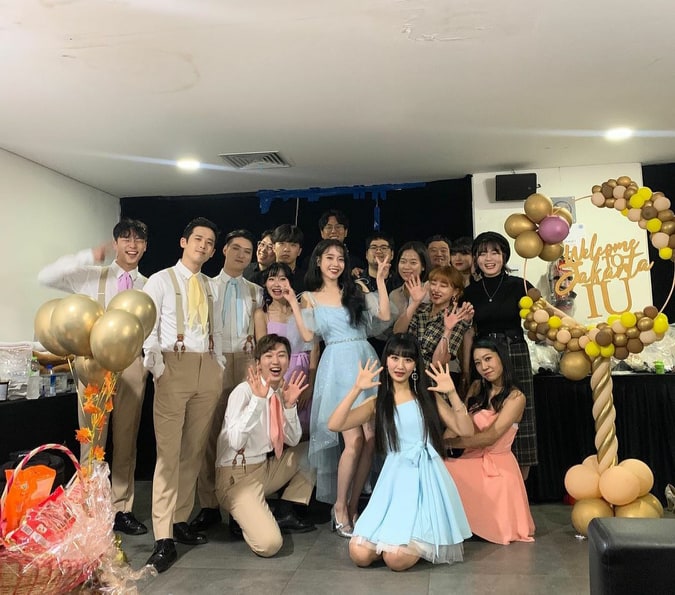 Hinting for the next song, IU told the crowd that everyone can have a good sleep as she followed it up with “Lullaby” and “Through The Night” before she went on a short break.

Coming back, IU performed “Dlwrma” in a piano version looking cutesy in a short purple velvet dress turning the night into a colorful musical stage. Thereafter, she again charmed the audience with “Red Shoes”.

While taking time to praise her fans, IU also tried her best to talk to them in their local language “Jangan lupakan hari ini ya. Aku pasti akan datang kembali lagi.”

Additionally, IU told the crowd how the fans made her feel special. As soon as she arrived, airport greeters sang “Above The Time”. Thus, she remarked thinking of Indonesian fans whenever she performs the song. She then belted it the song on stage.

IU capped the night off with “You & I”. As a gesture of goodbye to their favorite celebrity, fans treated IU with a thunderous fan chant. 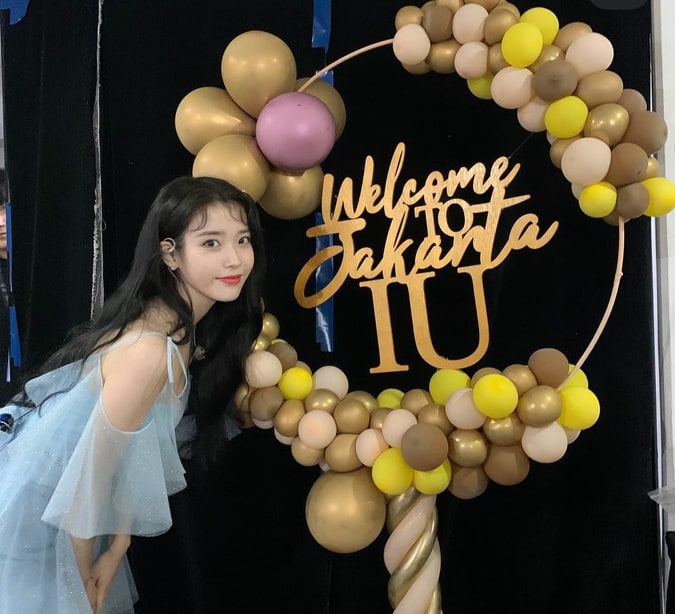 Giving in to IU’s request, fans chanted encore after five minutes. IU greeted the audience once again in a black and white ensemble same as her outfit in “You & I” MV.

She bid the audience goodbye as she performed “Good Day” wowing the audience with a perfect three-octave note higher than the original.

As she continued on with “Love Poem”, the audience raised a flag banner with a personal message for IU.

But of course, it does not end there. Fans waited another 5 mins before chanting again IU’s name and ask her to come back.

IU’s band entered the stage and IU came back with another R&B attire. She ask audience which songs they wanted her to sing and the crowd answered with “Dear Name”. She followed it up with “Leon” – another fan favorite.

Next, IU asked the audience again to vote for the next song. Between “Someday” and “Raindrops”, fans chose the former.

Obliging fans’ requests, IU performed “Ending Scene” and wowed the crowd once again. Even though she seemed a bit reluctant, IU pleased the crowd with one more song – “Heart” along with Jak-aenas.

The concert ended but fans and IU are smiling widely. IU vowed to come back more often and she has prepared more works for fans next year.

The last stop of IU’s “Love, Poem” concert in three words — “intimate”, “dreamlike”, and “splendid”. Notably, IU never forgot to say “Terima Kasih” at the end of every song she sang at the concert.

She’s very playful, interactive, and warm towards all the audience and fans. Everyone was moved to tears and satisfied after leaving the concert.

Love, Poem In Jakarta is presented by Kakao M and promoted by iMe Indonesia. Hellokpop Extends gratitude to IME Indonesia for the media invite.