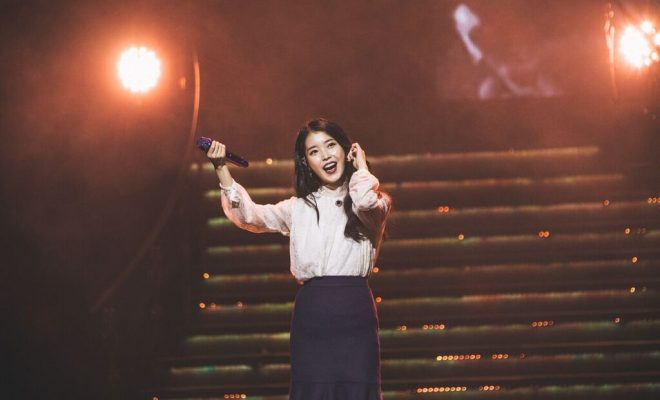 It was amazing and surreal — #IUinSG had us humming to songs of IU when we woke up after its sweet aftermath.

IU made sure that her first concert in Singapore on 15 December 2018 showcased 10 years worth of her genius craft as a music artist in dazzling colors.

Gifting fans with her decade-long hit tracks on 2018 IU 10th Anniversary Tour Concert <이지금 dlwlrma> In Singapore, Korea’s multi-awarded songstress made not just lingering impressions from her fans, but memories she would dearly keep in her heart.

Now let us take you to the most splendid moments of IU’s first ever concert in Singapore.

A string of IU’s classic favorites

Emerging from a stage lit with colors, IU was greeted with quick strokes of lights emanating from the light sticks of her excited fans; happily achieving a dream-come-true in finally meeting their cherished idol.

Not wanting to hold back, IU powered a continuous performance of her hit tracks which include “The Red Shoes” and “Cruel Fairytale”.

Slowing down from the lively beats, she mellowed a notch back placing the crowd on a sweet spell with “dlwlrma” and “Every End of the Day”.

With the audience completely won by her stage charms, IU hyped up the night by singing and greeting Singapore UAENAs through “Good Day”.

Amped from the bright notes, IU treated the energized attendees with her famous three high notes, leaving all of us AWESTRUCK.

And we swear we don’t know how she nailed all the songs in her continuous opening stage effortlessly. Her love for fans and undeniable talent endearingly fused together creating such heavenly music harmony. And yes, we won’t lie how IU made our jaws dropped with her amazing stage presence.

But IU did not stop from there. After sending her fans to a sweet oblivion, she added more through a saccharine serenade of “Between the Lips” and “Friday”.

Less than 30 minutes on her first Singapore stage, love struck is an understatement when she ended her first parade of songs with her famous cover of “The Meaning of You”, which the crowd happily sang along with her.

It was sure hard to come back from that perfect opening set list which had us all joyfully floating from somewhere nirvanic. But IU summoned the viewers back to reality by casually engaging in her signature genuine warmth.

She shared that she arrived in Singapore two days earlier and thus able to enjoy visiting nice places with her team. Since it was her first time, she expressed how happy she was to meet her Singapore fans and enjoyed the delicious food she got to try. She added how she will visit the country with her family next time.

Proving how she fell in love with Singapore, IU surprised the fans with her cover of famous Chinese song “Love” (爱情) by Karen Mok. Prior to that song number, she remarked how hard singing a foreign song is, that was why the fans were impressed on how the Korean songstress tweaked it in her own vivid colors.

Announcing a change on her setlist, IU shared that the song she was about to sing is for someone she dearly missed — SHINee’s Jonghyun.

The viewers waved their firefly green lightstick’s as her microphone also changed its color completing the pearl aqua sea of her “Gloomy Clock” stage.

Dotingly naming her Singapore fans “SingaENAs”, IU narrated stories about her singing and song writing journey. She revealed how when she was young, her songs seemed to lean on dark emotions owing to how she got affected by her detractors. But her fans and experiences inspired her to become a better person. Hence, she has been writing about love since then.

In addition, she mentioned feeling grateful for the overwhelming support of her followers. She hoped that fans would feel the emotions she conveyed in her song.

Conversing in English all throughout the middle part of the concert, IU adorably joked that she had to speak in Korean or else the concert would be shortened. She has been communicating in English, not needing much help from the interpreter, in her goal to engage freely with SingaUAENAs.

Her effort to interact with overseas supporters was just charming, an added service which made the night smooth flowing.

A palette full of bright songs

Clad in a sleek outfit and a cute green beret, IU kicked off her final set with “Palette” – a number she sang with the crowd. Paying homage to her younger years, she sang and danced “Marshmallow”, and revealed that it would be the last time she performed the song since she wanted her fans to forget “young IU”. The sad announcement brought the marshmallow mascots to tears, and we couldn’t help but chuckle.

Sending her early Christmas gift to all fans inside the Star Theatre, IU sang “Merry Christmas in Advance”. With the last strip of her concert songs, the multi-talented singer awed us with stunning renditions of “Last Night Story” and another classic hit “You and I”.

“Through the Night” and “Dear Name” had IU and her fans sealing the wonderful night of music that was long been awaited to happen.

Famous for her “encore” service in her concerts, IU left her fans who obviously wanted more, with her beautiful tracks “The Shower” and “Heart”. Had it not been for the flight to catch up for the Bangkok stop of her concert, she would oblige for more.

Sincerely grateful to be able to meet her Singapore fans, IU thanked everyone who have supported her in the last ten years. Appreciating the fan project gifted to her, she promised that she would never forget the beautiful fireflies she witnessed that night.

Definitely lit! IU’s Singapore stop of her 10th anniversary concert tour is one that is definitely worth the wait.

Read: 10 Songs Of IU That Celebrate Her 10 Beautiful Years As an Artist

2018 IU 10th Anniversary Tour Concert <이지금 dlwlrma> In Singapore was brought to fans by ONE Production in partnership with kakaoM.

HelloKpop extends gratitude to ONE Production Singapore for the invite to the event.