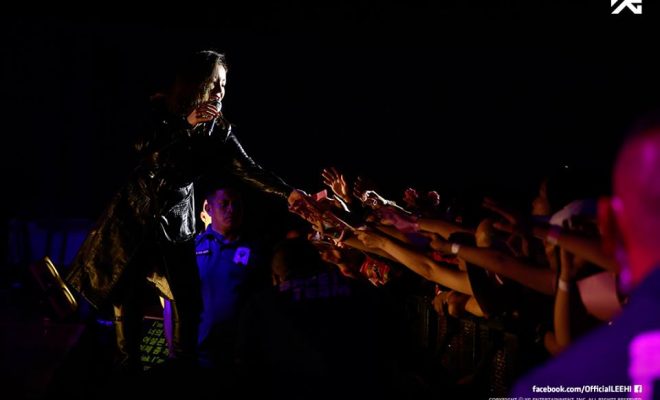 It was an intimate, emotional and special night for Lee Hi and Hice Creams.

The ‘2016 Lee Hi Seoulite Showcase in Manila‘ on September 23 marked the first time the YG singer performed for her fans in the Philippines.

Lee Hi opened the showcase with a jaw-dropping rendition of Breathe, her title track from her newest album Seoulite.

The singer made her anticipated comeback after a three-year hiatus with Seoulite. which was produced under YG’s sub-label, HIGHGRND, headed by EPIK HIGH‘s Tablo.

Breathe was also revealed to have been written and composed by Jonghyun of SHINEE. The song also achieved a digital music “all-kill” after its release. 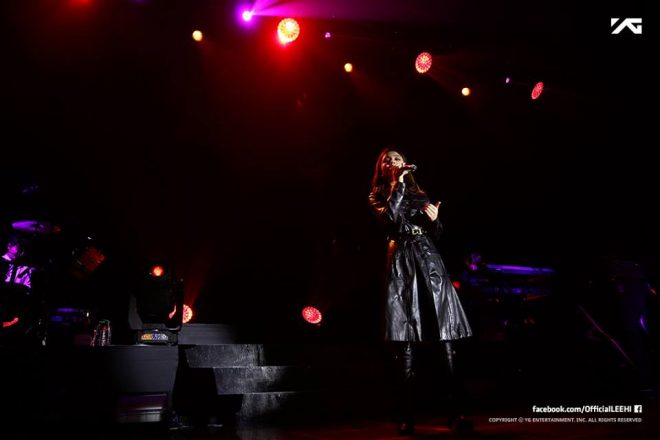 Following Breathe, Lee Hi performed Foul for Love, a song from her debut studio album, First Love released in 2013. During a short ment with fans, she said the showcase was special to her because it was the first time she met her fans in the Philippines.

Using superb vocals, the idol continued mesmerizing the crowd, with Up All Night and Special, rapping the rap parts of both songs much to the fans’ delight.

Up All Night was part of Seoulite album and a collaboration with Tablo, while Special was released through First Love and featured Jennie Kim of YG’s newest girl group, BLACKPINK.

Lee Hi also shared her plans for the rest of 2016, which she summarized in two humble words – work hard.

First Love’s title track, Rose, was next on the night’s set. Hice Creams raised banners of “We Love You, Lee Hi”, as the singer belted out an emotional performance of Missing You, written by Tablo.

September 23 also marked Lee Hi’s birthday, and fans did not let the opportunity slip to organize a special treat for the singer.

As Lee Hi walked off the stage to take a short break, fans, who were dressed in pink clothes, wore birthday hats and raised banners. Led by the night’s MC Dasuri Choi, the fans welcomed Lee Hi’s return on stage with a birthday song and cake.

The YG singer, who turned 20 (21 in Korean age) that night, thanked the fans for making her birthday special, saying that the fans’ surprise was the most memorable birthday gift which she has ever received. 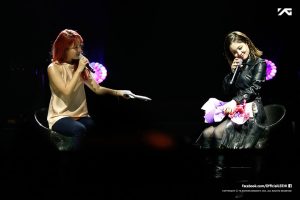 During the talk, Lee Hi revealed various facts about herself, like her ideal type, honeymoon destination, movie character she wanted to be, Yang Hyun Suk‘s most memorable advice, and the gift she wants for Christmas. She also showed her aegyo to fans by doing 1+1 = gwiyomi.

After the session, the singer took the stage and performed a medley of Mama Do, Bust Your Windows, and Mercy, of songs she performed during her stint in K-Pop Star Season 1.

In 2012, Lee Hi finished runner-up to Park Jimin in the show and later, signed to YG Entertainment.

The YG singer then gifted the fans with her collaboration song featuring Dok2, FXXK WIT US, also from her album Seoulite. According to her, only the fans in the Philippines were able to see and hear her perform the song live. She also rapped Dok2’s parts.

Lee Hi turned up the crowd even more with OFFICIAL and World Tour, also from Seoulite. She also showcased her rapping skills all throughout the concert, including Mino‘s part in World Tour. Mino also contributed to the lyrics of the song, which was written and composed by R&B singer DEAN under the name Deanfluenza.

With a “Mahal ko kayo (I love you)” to her fans, the singer sang My Star and Hold My Hand, two songs from Seoulite. Lee Hi performed the song from her album First Love, It’s Over, before exiting the stage. 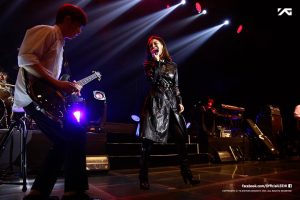 Lee Hi showcases not only her singing prowess but her on-point rap skills as well. (Photo credit to YG Entertainment)

The fans cheered “Lee Hi”, “We want more!”, and “Encore” before Lee Hi granted their request with Turn It Up, hyping the crowd. The now-standing crowd sang and danced along with Lee Hi to the tune of I’m Different, her collaboration with Akdong Musician‘s Suhyun and IKON‘s Bobby in 2014.

As the lights went on and the stage emptied, the emotions of the special night were etched from the memories of fans, who were lucky to witness Lee Hi and her soulful voice live.

The wait to see Lee Hi was indeed worthwhile as the latter and fans made the night extra special for each other.

Hellokpop would like to thank PULP Live World for the invitation to the showcase.