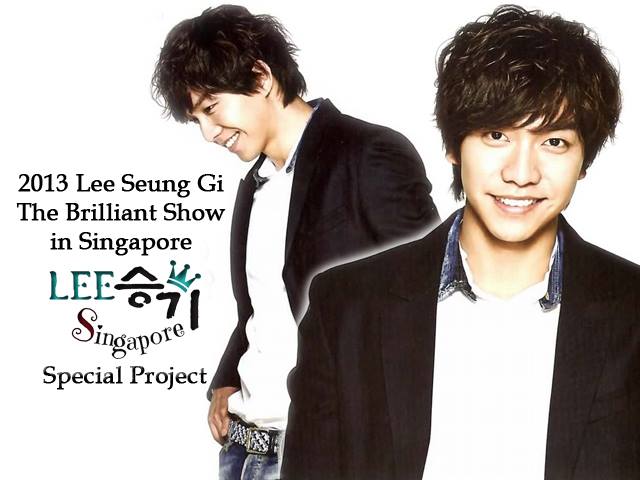 The saying “behind every successful man is a woman” rings true. All one has to do is look at Lee Seung Gi, and then at the thousands of women quietly supporting him from the sidelines (the fan club). Showing support by giving the media goodie bags full of Lee Seung Gi paraphernalia and albums, the fan club went the extra mile to also appeal to this reporter for support for Lee Seung Gi by first listening to the albums included in the good bag. To be able to count thousands of (wo)men worldwide as fans, this successful man is indeed not to be belittled.

Here for his showcase “The Brilliant Show” in Singapore last weekend, Lee Seung Gi finally returned to Singapore for his second visit. Without hesitation, he tackled one of the most important questions of the day-“What habit does Lee Seung Gi dislike most in a girl?”- with an affirmative “Maybe…Nothing!” (drawing deafening screams from the crowd.)

Armed with his disarming smile, Lee Seung Gi graced Singapore with his presence from Friday (6th Sept-press conference) to Saturday (7th Sept-for his showcase). Although his schedule conflicts and problems with issues like venue et cetera has prevented Lee Seung Gi from having a concert here thus far, it seems highly possible that Lee Seung Gi has set his sights on returning to Singapore as soon as possible to hold this long-awaited concert because he wants to be able to repay fans for their unwavering support.

However, in the meantime, the stage is set for Lee Seung Gi’s reappearance in the variety world through the “Backpacking Project”, slated to air in December this year. Working alongside PD Na, Lee Seung Gi would be filming with popular female actresses come October or November for the spinoff on the “Grandpas over Flowers” show. As it would be related to travel, Lee Seung Gi could not help gushing over the food he was already daydreaming of laying his hands on.

This self-proclaimed foodie then went on to proclaim that he always searches on the Internet first before going places in order to be well-informed about the local food. With regards to the Singaporean cuisine, he did not hesitate to share his thoughts about the chili crab here, going so far as to say that he would like to open a chili crab restaurant in Singapore should he have the opportunity to do a business venture here. “I really like Singapore’s food!”

When asked what qualities he had-after being voted ‘best travel mate and best husband’, being known as a Mr Perfect, recognized for his acclaimed acting skills and vocals-Lee Seung Gi must have already had an inkling of what makes the perfect guy; yet he seemed quite taken aback and modestly stated that there was nothing much about himself that he could brag about. “I think a good husband is one who thinks of his family first and above all other things. He is one who cares for the family wholeheartedly and who is kind to them.”

How about Lee Seung Gi’s ideal wedding? What does he have in mind? “Although there are many ways of having a memorable wedding, I would want to have a simple and normal wedding. (No frills!)”

Last word to the fans: “Unlike other groups who can go overseas often, I do not often have this opportunity to do so. Yet, till now, fans have always been cheering for me and have been so welcoming, I feel especially thankful to them.”

Now, having wrapped up his Singapore showcase successfully, fans can anticipate his return to variety shows very soon, and hopefully, Lee Seung Gi will be back in Singapore for the third consecutive year in 2014!

Meanwhile, if you have not yet shown your support for Lee Seung Gi but have the intention to, visit the Lee Seung Gi’s fanclub Airen’s website and Facebook to find out how to continue supporting this No.1 Husband!

Watch this cute video which Singapore Airens have gathered together to produce and present to Lee Seung Gi during the fan meeting, of which he now also has a copy in Korean!

Also, the fun times that Airens had together while making of the video: