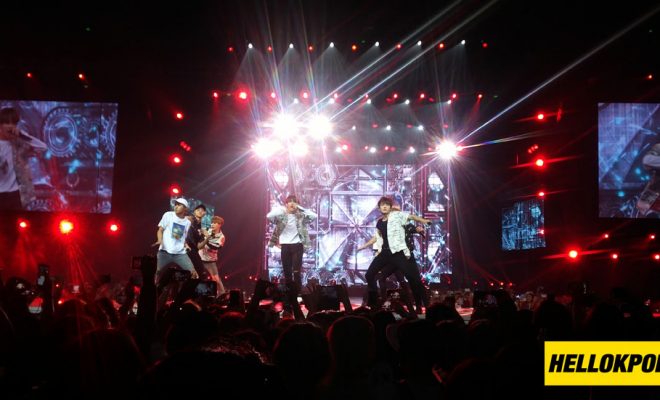 History has been made as ‘MBC Music Show Champion in Manila’ ends with lots of buzzes and blazes.

Everyone was bustling. With light sticks, banners, and fan projects in hand, faces were plastered with excited smiles and nervous eyes.

The day has finally come – nine hot Korean pop acts and a sought-after comedian will be gathering at the SM Mall of Asia Arena in Philippines. It was the biggest gathering of K-pop stars ever in the Philippines, and the first time a Korean music show will be gracing the Southeast Asian country.

The buzz has been on as early as July, with the first announcement of All Access Production, the company behind the show that shook Manila on September 3. The 200th episode of ‘MBC Music Show Champion’ lined up impressive artists, including M&D (Kim Hee Chul of Super Junior and Kim Jung Mo of TRAX), VIXX, BTS, BAP, AOA, SONAMOO, GUGUDAN, KNK, ASTRO and the show’s MC, Kim Shin Young. 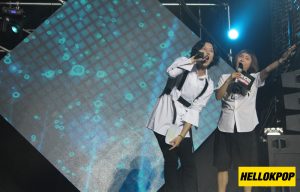 As the clock struck 7 p.m., the countdown began.

MC Kim Shin Young, together with special MC Kim Hee Chul, greeted the crowd and the viewers of the show, marking the start of the 200th episode special of ‘MBC Music Show Champion’. 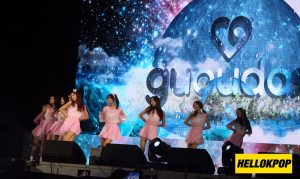 GUGUDAN light up the stage with their performances of Wonderland and Diary.

Opening the stage were the nine ladies of GUGUDAN, VIXX’s labelmates who are also the youngest of the bunch. GUGUDAN performed their debut song, Wonderland and gave the crowd a peek to their “diary” literally with their song, Diary.

The 200th episode of ‘MBC Music Show Champion in Manila’ marked the the girl group’s first overseas performance, which was met with applause and screams from fanboys and fangirls alike. 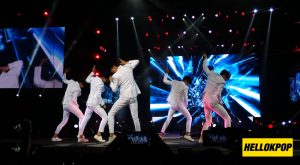 Knocking on fans’ hearts are the boys of KNK.

Five boys knocked on the hearts of the audience next not only with their good looks and tall stature, but also with their powerful dance moves and jaw-dropping vocal prowess.

Clothed in white suits, the boys of KNK were dashing and manly in their performance of their debut song, Knock. The group, who revealed their plans for a comeback during the press conference, has successfully entered the hearts of the audience with their last song, Back Again, keeping their promise of impressive and powerful stages for the show. 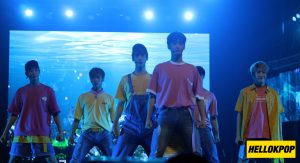 There is no hide and seeking of talent with ASTRO.

ASTRO rocked the stage next with their boyish and refreshing charms as they leave the crowd breathing hard in awe with Breathless.

The boys of ASTRO also shared their experience of eating the food from Filipino fast food chain, Jollibee, exclaiming of its deliciousness. The boy group also surprised the crowd as they hop into the bandwagon of the “Pak Ganern” trend and stepping up a level by playing the “Pak Ganern” game.

ASTRO ended their stage with a remix of Cat’s Eye and Polaris (and cute and wacky expressions to boot). 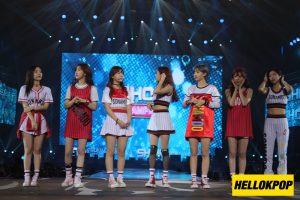 Fans liked it too much seeing SONAMOO perform live.

Fans couldn’t help but gush over the girls of SONAMOO as they take over the stage with bright and energetic performance of I Like You Too Much.

The seven members, who expressed their hope to be liked by Filipino fans they were meeting for the first time during the press conference, have definitely succeeded in their quest, and earned more following at the end of their stage with Round and Round. 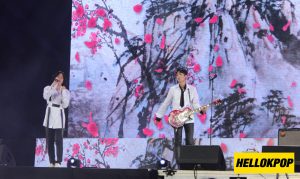 M&D rocking out their stages with Hee Chul’s vocals and Jung Mo’s guitar.

Super Junior’s Kim Hee Chul and TRAX’s Jung Mo filled the stage next as M&D, belting out their songs, Close Your Mouth and Ulsanbawi.

Hee Chul hyped the crowd further, and got the Everlasting Friends of Super Junior keeping their fingers crossed with his hint of a possibility of a Super Show 7 in the country.

During the talk in between their performances, the “universal star” of Super Junior said, “Philippine, coming soon, Super Show 7”, earning loud screams and excited murmurs from the crowd.

M&D got the crowd jumping along as they close their performance with Rokkuko. 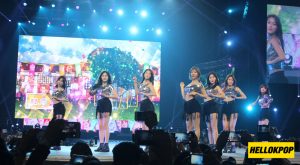 Attacking fans with Good Luck, Heart Attack and Like A Cat are the Ace of Angels, AOA.

It was probably good luck that has descended upon Manila to see the AOA’s live performance of Good Luck, Heart Attack and Like A Cat in one night.

The seven girls heated up the stage with their charming and alluring performances of their title songs.

Despite debuting in 2012, MBC Music’s Show Champion in Manila marked the first time that the group visited the Philippines for a performance. But the wait of Elvis was definitely worth it. 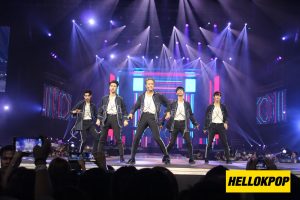 It’s not a fantasy. VIXX was here with Fantasy, Love Me Do and Dynamite.

If it took AOA four years to come, it only took VIXX a little over a year to return to the Philippines and entertain Starlights once again with their songs and choreography.

Although Leo did not participate due to his injury, the boys of VIXX made up for the absence of their member. The group performed their latest song, Fantasy, followed by Love Me Do.

Hearts of fans definitely exploded with happiness as they sing and dance along to Dynamite, VIXX’s final song of the night. 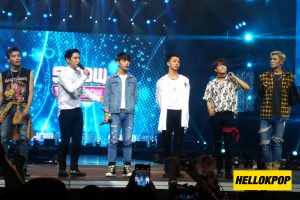 After Show Champion in Manila, B.A.P. has become everyone’s jam.

B.A.P. definitely lived up to their name as they turn the Show Champion stage into one big party with That’s My Jam as their first song.

The group, who was not first timer in the Philippines, definitely knew how to get the crowd going with Wild, Young and Free next.

The crowd and B.A.P.became one in their second to the last song of No Mercy as the boys moved around the stage, and had the audience’s hands up to the beat.

B.A.P. ended their performance with a bang physically with Bang, Bang, shooting fans with thirst for more of the energetic group. 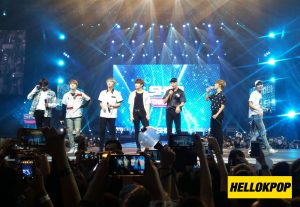 It was blazing with dope and fun with BTS.

Closing the stage for the 200th episode of MBC Music’s Show Champion were the bulletproof boys of BTS, who expressed their excitement in performing again at the same arena.

The leader of the group, Rap Monster, said during their ment,”It is feels good to be back”, and congratulated ‘MBC Music Show Champion’ for reaching 200 episodes.

The stage was blazing and smoking hot with the group’s first stage, Fire. With Rap Monster cue of “Are you ready for BTS?”

The seven boys continued to mesmerize the crowd with Save Me. V showered the crowd not only with energy but literally showering them with water as they kicked off their performance of Boyz with Fun. And finally, capping off the BTS stage was a dope performance of Dope itself, which was also the last song of the night, marking the end of the show.

The show ended with fans screaming for more, as the definite success of  the date now marked in the Hallyu history of the Philippines.

‘MBC Music Show Champion in Manila’ did not only show the success of the 200th episode but the ever-growing Hallyu phenomenon in the Philippines as well.

History has been made.

More photos from the ‘MBC Music Show Champion in Manila’: 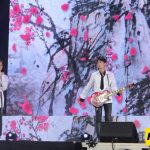 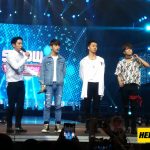 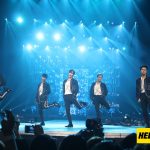 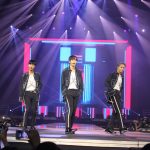 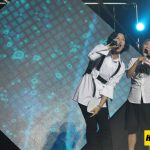 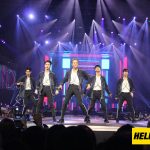 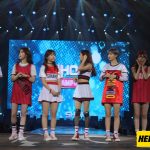 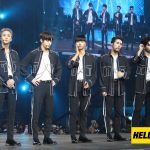 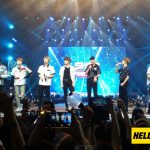 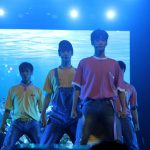 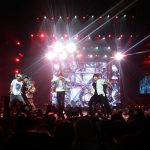 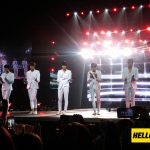 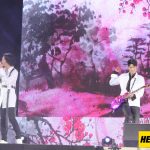 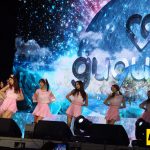 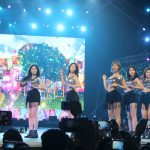 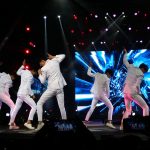 ‘MBC Music Show Champion in Manila’ is made possible for the fans by MBC Music, All Access Productions, SM Mall Of Asia Arena, and SM Tickets.

Hellokpop would like to thank ALL ACCESS PRODUCTIONS for the invitation to the press conference and the show.