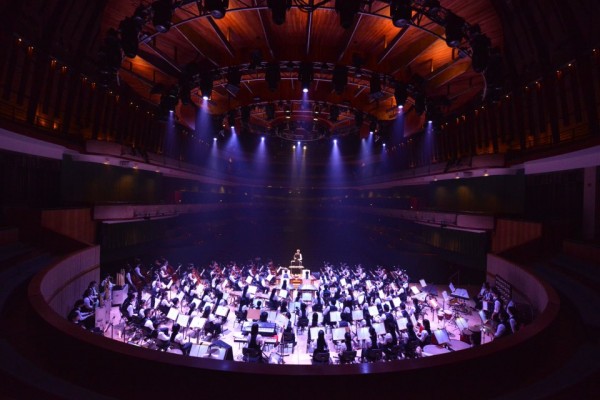 For those who have been exposed to this unique mixture of instruments through Korean drama Heartstrings (starring Jung Yong Hwa as a guitarist and Park Shin Hye as the female protagonist who plays the gayageum-a Korean traditional instrument), or seen the recent live performance of AOA’s Get Out featuring Mina, this risky and meticulously crafted pair-up can either be a success, or downright painful to the ears, lest to say undermining the traditional instruments, who often cannot be heard due to the nature of modern instruments to be louder and more easily heard by the audience. Nanyang Polytechnic Chinese Orchestra (NYPCO), however, proved their mettle with their concert K-ATTACK II, held on the 3rd of November, 2012, at the Esplanade Concert Hall, Singapore. 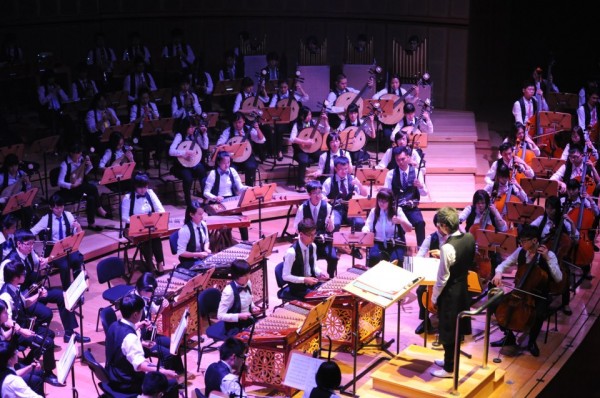 The first section began with a majestic rendition of IU’s You and I, then continued with melancholic tunes like  SISTAR’s Alone and 2AM’s I Wonder if You Hurt Like Me, and finishing with CNBLUE‘s Hey You. A percussion-only performance of BoA’s Only One, KARA’s Pandora and 2NE1’s I Love You, a song that shook the K-pop industry with its distinctly un-Kpop-like-sound, NYPCO performed songs across a range of genres, exploring diverse repertoires even under the K-pop umbrella itself. 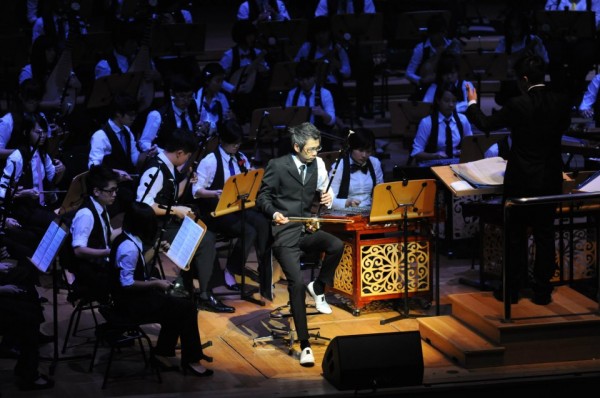 Performing T-ara’s Lovey Dovey, SHINee’s Sherlock, SNSD’s Paparazzi and Huh Gak’s It Hurts and even the then yet-to-be-officially-released 2PM’s Masquerade in the second segment, NYPCO showcased their ability by covering recent and popular songs.  The Sherlock performance was exceptional, made complete with the chants of “SHINee’s back, SHINee’s back” by the orchestra members. Fast numbers like Lovey Dovey and Paparazzi were no easy feat either, but the orchestra seemed to have fun even whilst having to deal with the huge number of notes. NYPCO ended the second segment by bringing the house down with an expected performance of the song that has been taking the world by storm-PSY’s Gangnam Style. 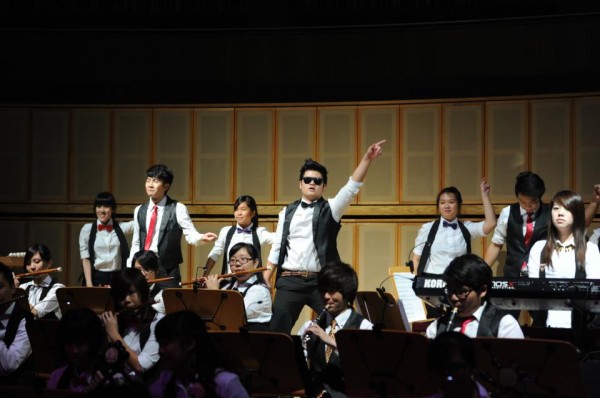 From a PSY doppelganger, sunglasses, the cheesy horse-dance, orchestra members dancing to Gangnam Style with style, to a girl member standing up and saying “Oppa, Gangnam Style” in a cute voice, NYPCO put in much effort to ensure that the audience would enjoy this particular song.

More great songs, for example, DBSK’s Keep Your Head Down, followed in the third section. The last song was most memorable, as it was not a single song, but a seamless mash-up comprising BIG BANG’s Fantastic Baby, Blue, Monster and Love Song. For the encore, the maestro apologized for not being able to play more songs, and to make up for that, the orchestra would “play one last song with at least ten songs”, and among these songs were SNSD’s The Boys and Mr Taxi, 2PM’s Put Your Hands Up, T-ara’s Cry Cry, F.T. Island’s Hello Hello, CNBLUE’s  I’m A Loner, KARA’s Mister, BIG BANG’s Tonight,  4Minute’s Heart to Heart, B2ST’s Fiction, SNSD Taeyeon’s  Can You Hear Me, U-Kiss’ 0330, and many more.

Songs that were most spectacularly delivered and which stood out in their powerful and accurate delivery and conveyance of the emotions were later revealed to be the songs arranged by one of its members. Displaying superb skills in blending the sounds of the different types of instruments, as well as in arranging pop songs for traditional instruments, this laudable accomplishment has not only depicted how the NYPCO is not only just a place for students to improve their craft, but also to try their hand at challenging the abilities of the instruments in terms of the songs they are usually associated to and deemed fit to perform. Although there is an absence of an overarching theme to the whole concert and thus the songs did not contribute to the whole flow of the concert-flitting from light-hearted songs to groovy songs and to emotional songs-, both orchestra and audience enjoyed themselves tremendously. 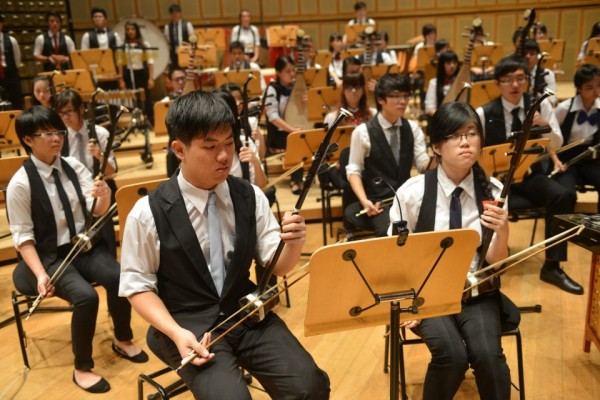 What makes K-ATTACK II a refreshing performance  is that they pay homage to the music preferences of today through their traditional instruments . Having come a long way since being formed in 2009, the orchestra has grown from a mere 45 members to the current 155 members under the helm of conductor Mike Chiang. Majority of the friends who turned out to support members of the orchestra were evidently K-pop fans rather than fans of the traditional instruments. However, this concert merged the traditional with the modern, and even though the creation of this new sound inevitably eradicates a little the beauty of both the traditional and the modern, it is testimony to a brave new vision which the NYPCO has embraced to keep the Chinese instruments relevant in today’s society.

If you , the K-pop lover, want to wave light-sticks to your favorite songs with like-minded friends but cannot afford the skyrocketing prices of tickets to see your idols, why not look forward to next year’s concert by NYPCO? Besides being treated to a performance full of laughs while learning to appreciate music produced by a Chinese orchestra, this is one concert where you definitely can experience that wordless sense of contentment derived just from listening to music-it will be an attack (or K-ATTACK) on your senses! 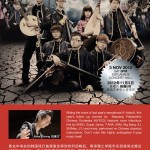