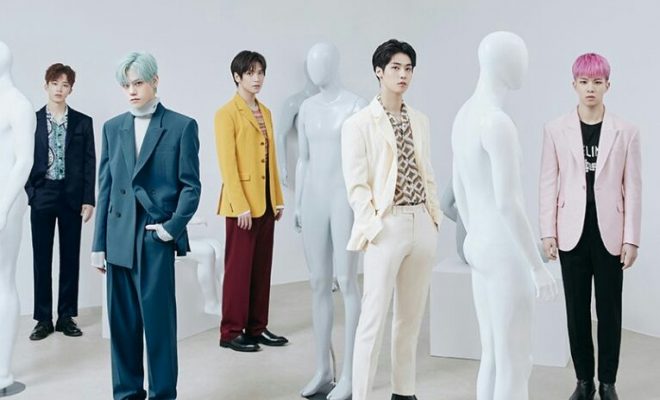 N.Flying really makes their mark through music. Including the band’s thoughts about each song and how it enables them to connect with their fans make it even more meaningful.

Among the most remarkable things about N.Flying is their ability to communicate their thoughts and feelings through their music. Since they first graced South Korea with their debut mini-album Awesome in 2015 up to their latest mini-album release titled So, 通, the band has never failed to connect with listeners through every word, beat, and melody.

Listeners laud them for bringing music that everyone, especially the youth, can easily relate to. Just like their fans, the group showcases an impressive growth with each and every one of their comebacks.

Recently, Hellokpop had the chance of chatting with N.Flying for an interview where they shared their thoughts about their latest comeback with So, 通, and being able to touch the hearts of fans through their music, as well as the advice that they would share to younger groups.

In this insightful conversation that ended with their sweet and sincere messages to fans, the quintet showed their sensibilities as artists – and we got to see why they are much-loved by fans even more.

Let’s get the beat rolling with N.Flying, shall we?

Hello N.Flying! It’s nice to be able to communicate with you for the first time. You made a comeback with a new album, how do you feel? And please give us a brief explanation about the title song “Oh Really.”

I feel like “YES! Finally we made a comeback!” We’ve been waiting so long for the new album to come out. We were absorbed in exercise, work, and practice every day, but at this time, we are so excited to think that finally, we can show our works to N.Fia.

What is the highlight that you want to emphasize in this album?

The joining of our new member! We got a new youngest member of the team. Hwe Seung is a hyung (elder brother) now.

What is your favorite song in this album?

Seung Hyub: “FLOWER FANTASY”. I like a song that has a clear message.

Hun: “FLOWER FANTASY”. I like the feeling of the song. Above all, I like the purpose of the song which is to give hope to people during hard times.

Jae Hyun: “I’M GONNA”. This song shows the excitement of romance by saying things such as “I like everything you are doing! I love this space where I am breathing with you!” There are so many interesting points in the song that makes you sing along without getting bored—that’s why I like this song a lot.

Hwe Seung: “Last Song”. When I listen to this song, it makes my heart warm.

Dong Sung: “Oh really”. These days, whenever I say this phrase, it strikes me and makes me think. Also, this song is greatly addictive, and I feel like it will be a song forbidden during SAT (scholastic aptitude test).

The biggest change in this comeback is the joining of new member Dong Sung, Is there any change in the mood of the team?

First, the mood became much brighter, and since all of the members think about Dong Sung so much, we tend to nag at him a lot. We got really close [with him] and we look after one another.

N.Flying is known for making music that represents the youth. As we know, the youth also grows up and so does N.Flying. How do you showcase this growth and make sure that you remain relatable to the youth through your music for every era/comeback?

Somehow, it became like that. We never thought of us being the band that talks about ‘Youth’, I think we sing and make songs about our story and our thoughts, and it just naturally talks about youth. Since the mention of “we sing about youth” came from those who are listening to our music, I guess that means we communicate well with our listeners, right?

Last year, you released the song “It’s Okay” as part of a youth suicide prevention campaign. Aside from performing it, you also personally participated in composing and writing the song’s lyrics. What were your thoughts while making the track, and what were the key points and feelings that you wanted to emphasize?

Our hearts were thankful and [it felt] valuable. People say through SNS that they were able to muster up the courage because they listen to N.Flying’s music. There are also a lot of people who thank us for making good songs, but we are the ones who feel thankful. We want to reply to all of them [on SNS] so much [but it may be difficult to do so] so we’d rather sing in return with our music.

As the song aimed for, it was able to make your fans feel encouragement and hope. How does the fact that people find comfort through your songs make you feel? And how do you communicate with the fans as a band?

We were thankful and thought it was a great choice to be a band and make music. We are so proud and happy that our impact is giving positive energy to people [and that] we are communicating with people through music as a band.

About going online for fans

Since bands usually pride themselves on giving audiences live music, this current situation of not being able to perform in front of fans must have been more difficult for you. But fortunately, N.Flying presented a solution to this through your online busking session, and we heard that it was personally planned by you. What motivated you to come up with the idea of bringing your busking sessions online through live YouTube broadcasts?

We really wanted to do busking and performances, and our N.Fia probably feel the same way. So then, we thought about what we could do and online busking was the answer to it. But we feel like it’s still not enough, so we are still thinking of ways to get closer with N.Fia more.

The first online busking session gathered really great responses from your fans, and it even trended on real-time in Twitter. What were your reactions to this? And how was the experience like overall, especially compared to offline busking sessions?

We found a different attraction towards doing online busking. When we had outdoor busking, we were feeling sorry for some people who couldn’t come to see it. So we liked the online busking because more people could see our performance. However, we felt sad that we couldn’t meet the fans in person and see N.Fia’s reactions during the busking.

About advices and messages

You’ve been receiving really great reviews from your fellow artists, and even those who are seniors to you, especially with your amazing performances on shows like “Immortal Songs”. How does this make you feel? And what was the most heartwarming feedback you’ve received from a senior?

Actually, [for our] answer to this, we want to give more credit to Hwe Seung rather than N.Flying. All the members thank him because Hwe Seung did a great job in Immortal Songs even though he was all alone. As we worked hard like this, many fellow artists took good care of N.Flying. Fellow artists are giving compliments and telling us that we are great at playing and singing even if we are still lacking.

What advice would you offer to your juniors in the industry?

Seung Hyub: We’ve been a band for only six years now, but if we may give advice to junior bands, I think there is no [actual] right answer. I think while they stand at the stage and go through different situations, they could have many concerns. When you overcome [those] one by one, one day you will notice you have grown. In N.Flying’s way, no matter what, we trust our members and became a family, I guess. As for a concept to keep in mind, [I’d say] humility!

Hun: First, work hard with the position you like! Then no matter how difficult it is, more and more you will enjoy it and ultimately, you will be good with it.

Jae Hyun: I think doing [music as] a band, you already achieve your dream. This is what we dreamed of, and you are working hard to show your dream, right? If you work hard to achieve your dream, people around you will notice your dream and for the most, you will have people who support you. Do not give up and pursue [your dreams] as a band who is doing the music you like, and tell a story you want to tell. As a singer, an artist, or as a band, the most influential communication is music.

Hwe Seung: I’m also [still] learning and not know everything about music, so what I’ll say might not be too huge. The most important aspect I think is [that] the band should enjoy the music with people that you love whom you can think of as a family.

Dong Sung: To the juniors who are currently active and the juniors who will be active in the future, take care of yourself, enjoy your work, and let’s spread band music together!

Seung Hyub: Hello, Hellokpop, This is Seung Hyub from N.Flying. It’s been a while, but we made our comeback. Because [of] you who are waiting for us, we have a driving force to work harder. We want to see you so much; sadly, we cannot. But we will be here ’till we are in our 80s so that we’ll be able to see all of you, please don’t forget us. When this crisis ends, slowly we will come to you. Thank you and we love you.

Hun: Hello, Hellokpop. This is Hun from N.Flying. It is [currently] hard to make a concert in which you can be present too but let us overcome [this] together and see you soon at concerts. Fighting!

Jae Hyun: Hello, Hellokpop. This is Jae Hyun from N.Flying. Many people around the world are having a hard time. We, N.Flying came back with the album So, 通, to bring you some strength. Nothing can be as upsetting, hard, or sad as being disconnected. We, N.Flying, want to deliver the meaning of communication and when the time passes and we can gather together in the concert hall, we can say “Oh, it’s been difficult back in time right?” and enjoy the concert. We, N.Flying, will wait for sure. Please be a little more patient. Thank you.

Hwe Seung: Hello, Hellokpop, this is Hwe Seung from N.Flying. Although, it is difficult to see you directly due to the bad timing, let us not lose hold of our tension. I would like to see everyone at the concert hall as soon as possible. Until then, fighting!

Dong Sung: Hello, Hellokpop. This is Dong Sung from N.Flying. I am glad to see you like this. I wish I can see you more often, we will make good music, so check on us and love us. Thank you.

Hellokpop, as an independent Korean entertainment news website (without influence from any agency or corporation), we need your support! If you have enjoyed our work, consider to support us with a one-time or recurring donation from as low as US$5 to keep our site going! Donate securely below via Stripe, Paypal, Apple Pay or Google Wallet.
FacebookTwitter
SubscribeGoogleWhatsappPinterestDiggRedditStumbleuponVkWeiboPocketTumblrMailMeneameOdnoklassniki
Related ItemsN FlyingOh really.So 通엔플라잉
← Previous Story [INTERVIEW] Meet Seori, Korea’s Next R&B Super-Rookie
Next Story → Kassy Gives Introduction Of Her New Single “Tock Tock” Through An Interview