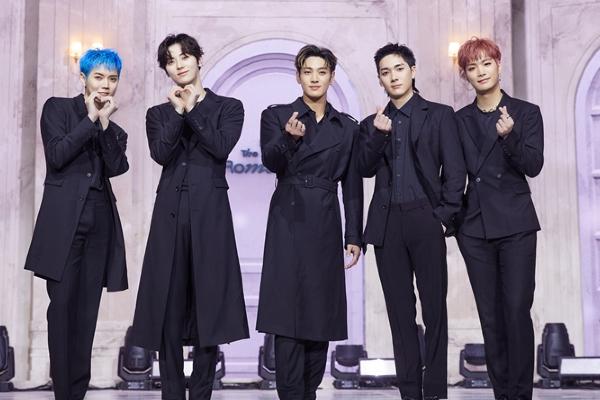 Get to know the story behind Romanticize‘s creation and NU’EST’s music show win pledge!

NU’EST talked about special behind-the-scenes episodes and the process of the album’s making during the global media showcase conducted hours before the release of the 2nd full album Romanticize. 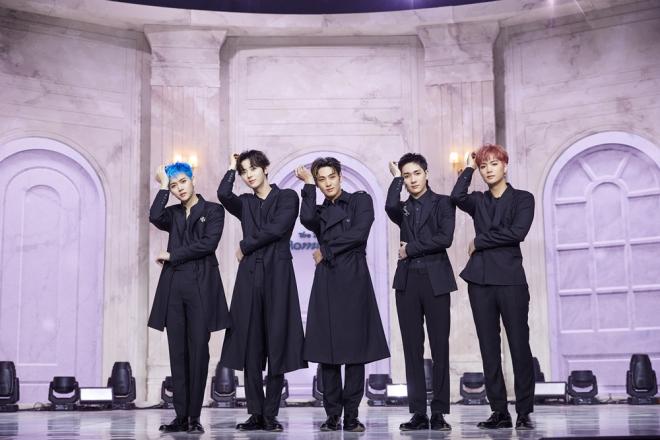 Before officially starting the media showcase, the press had the chance to capture the members’ beauty through the Photo Time. After the group photo, each member took their turn to take on center stage to pose wittily.
Particularly, the eldest member Aron, who was on hiatus in the first months of the year came back in good shape. Fans had missed the LA-born singer so much that seeing him with the boys today gave everyone happiness and relief.
Posing fatally as he does the point choreography of their title track “INSIDE OUT,” Aron’s eyebrow slit was sensational. While his suit brought out the rapper and vocalist’s manliness. In another shot, Aron poses with his two hands creating a “V” alongside the sweetest smile that fans had missed for a long time. 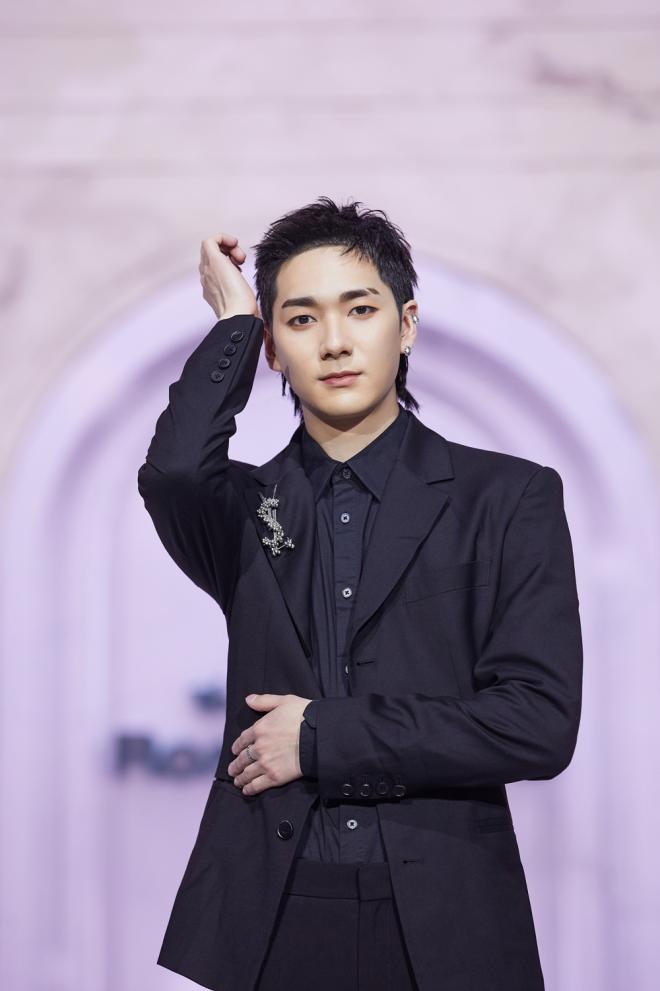 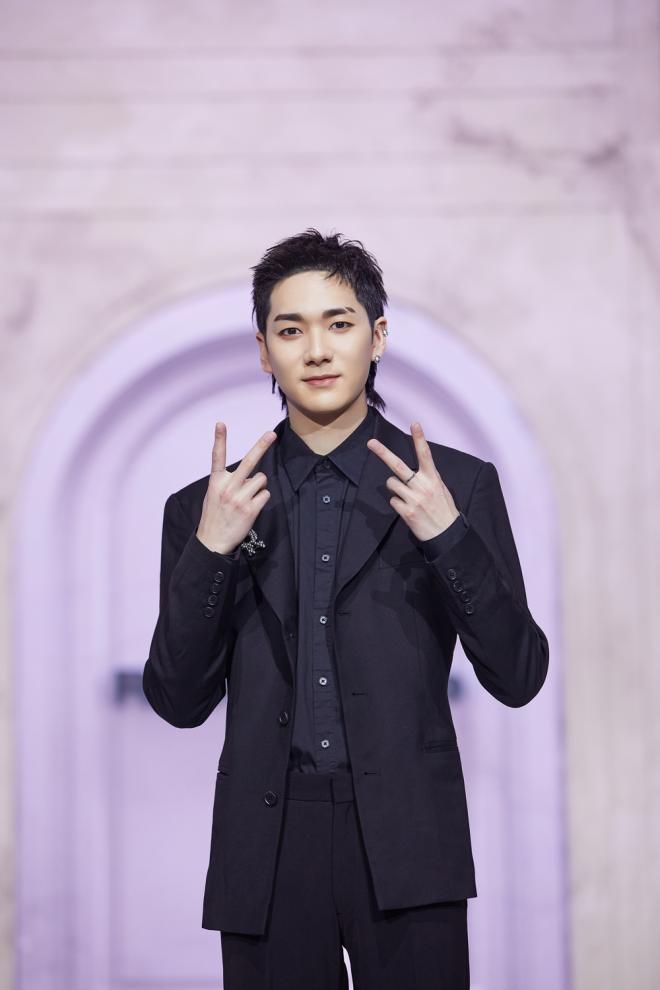 Followed by NU’EST’s trustworthy leader, JR proudly made his way onstage. His earring perhaps was the point of his bold and magnificent styling. Accordingly, the main rapper placing his index finger on his lips created a rather sexy aura from the charismatic main rapper. 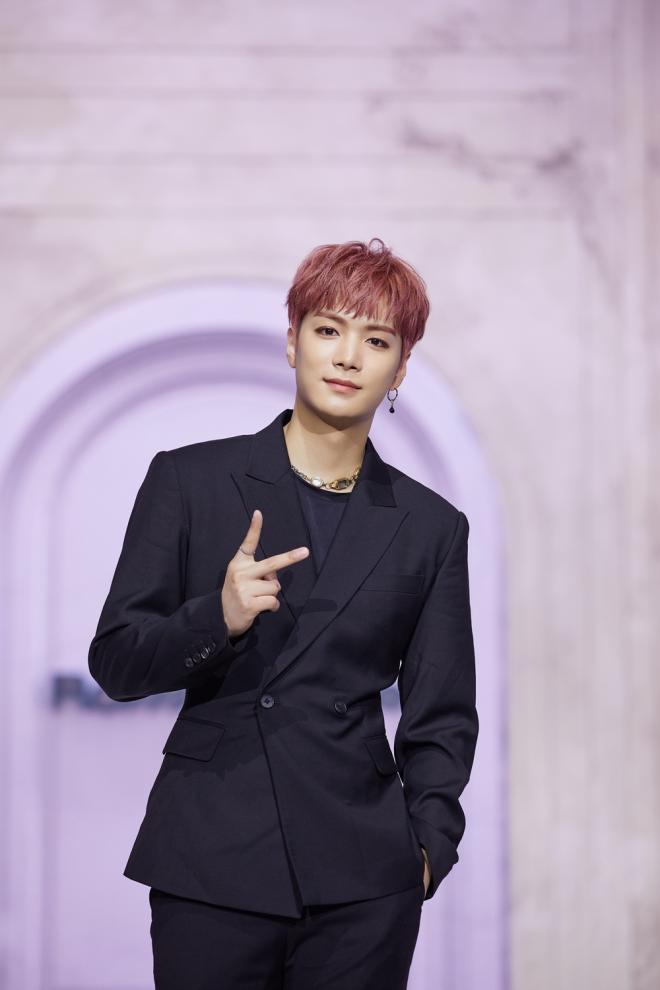 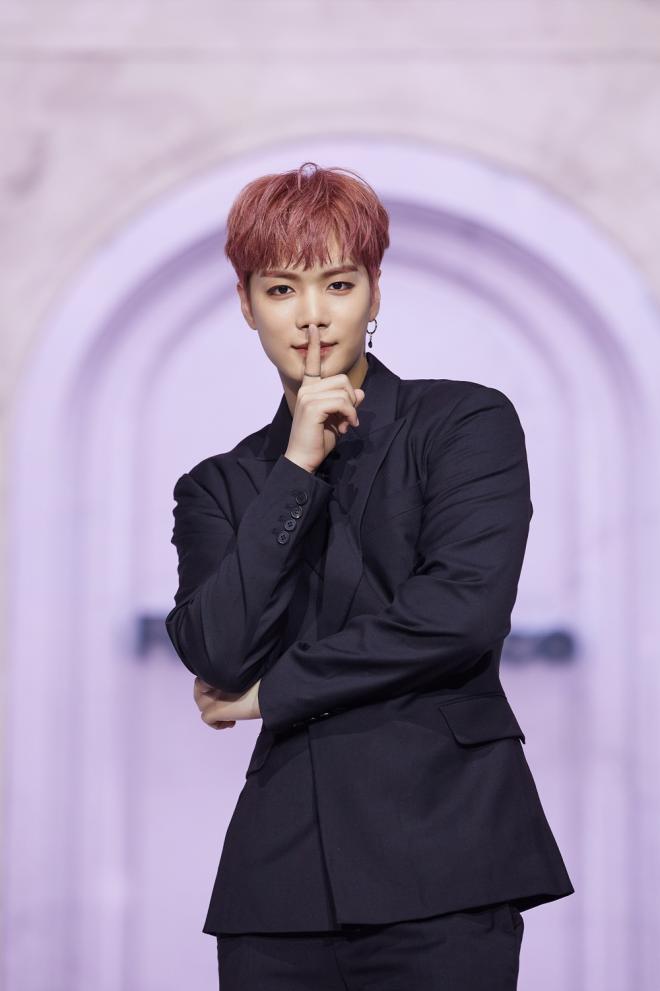 Next, the genius composer himself, Baekho commanded attention with his effortless appeal. He posed doing one of the point choreography of the title song which he participated in the writing and composing. With a pleasant smile on his lovely face, the main vocalist stared into the camera as he joyfully waved his hands in greeting. 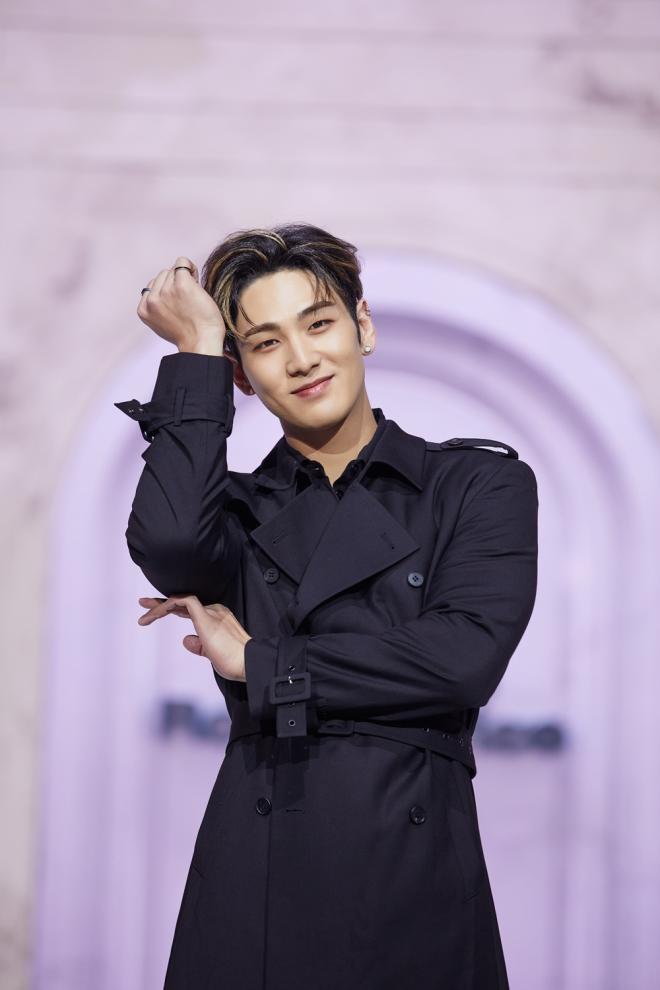 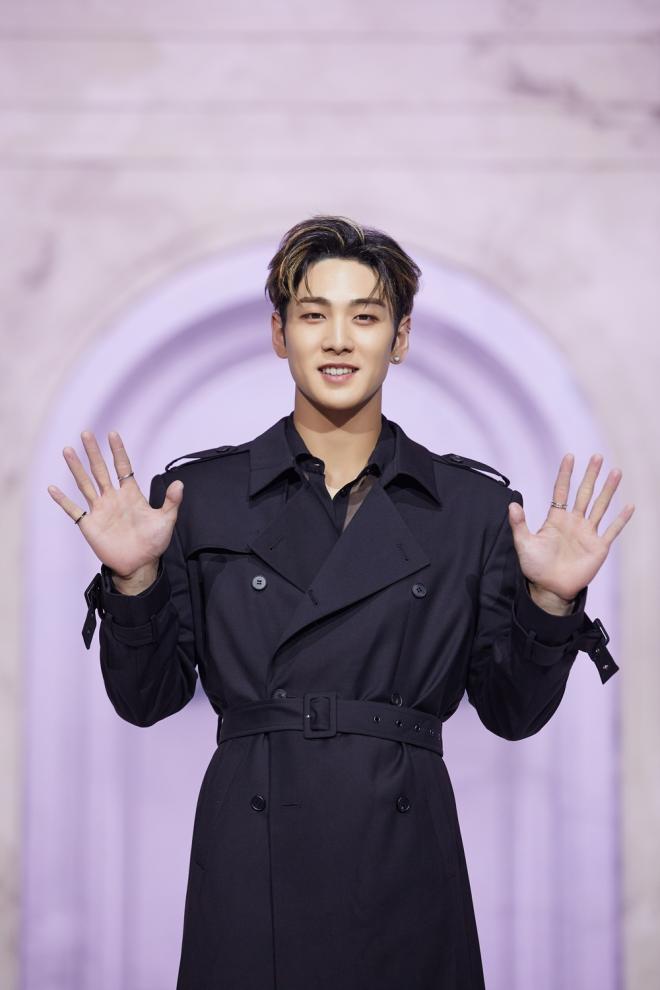 Of course, Minhyun got his visuals ready all the time. Such a simple look at the camera made fans scream in delight, and Minhyun was definitely aware of it. In the other photo, Emperor Hwang does one of the point choreography for their title track “INSIDE OUT.” 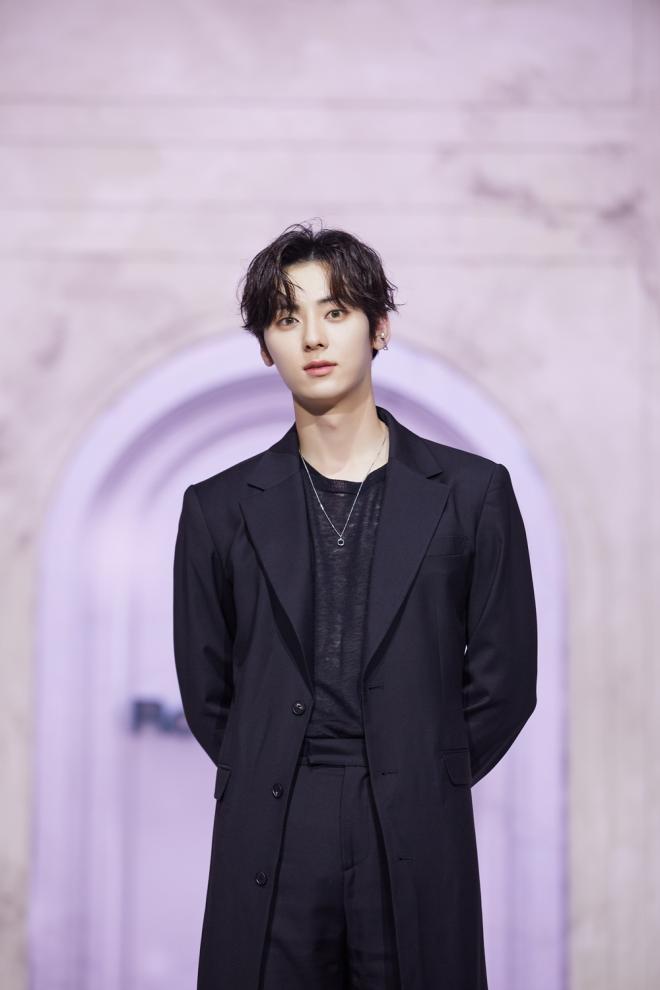 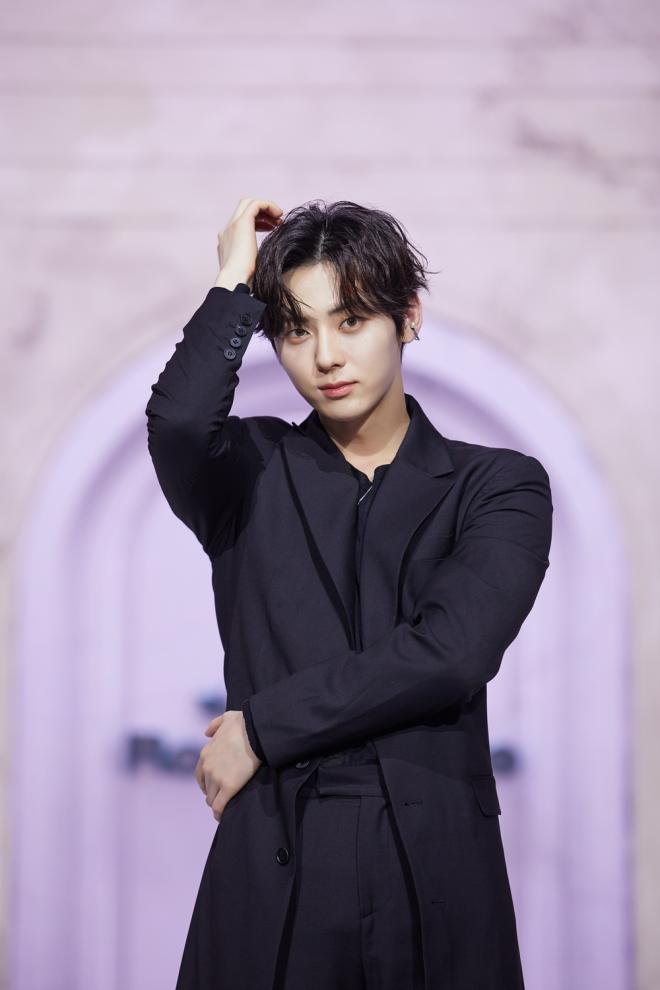 Finally, the youngest Ren cheerfully went onstage, thanking the host for praising his elegant blue hair. Filled with confidence, NU’EST’s rabbit also did the point choreography of “INSIDE OUT”. While on the other photo, he is seen smiling sweetly with the cutest “V” pose. 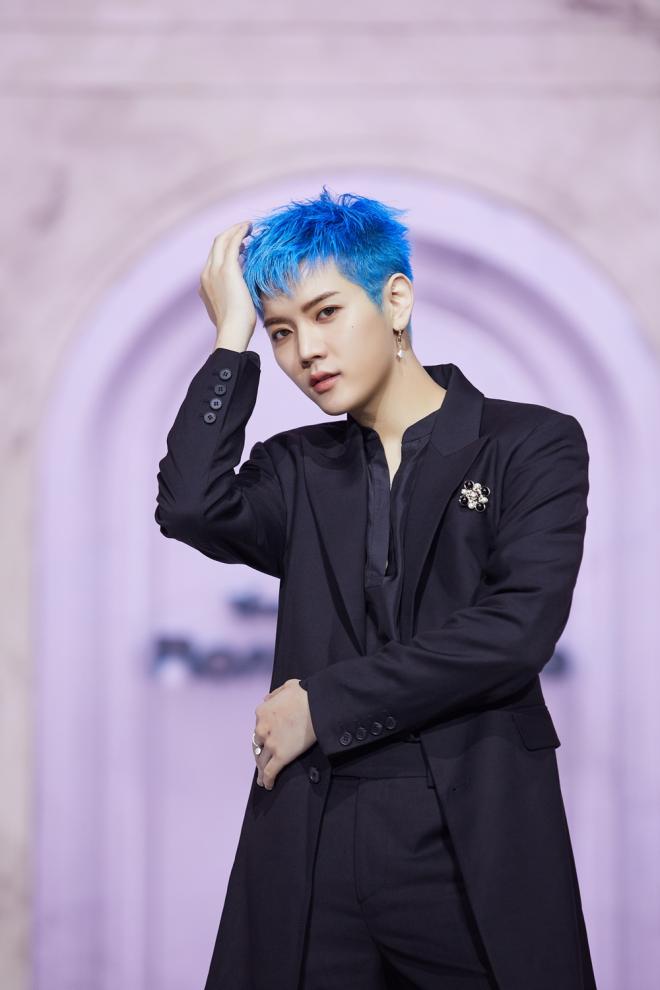 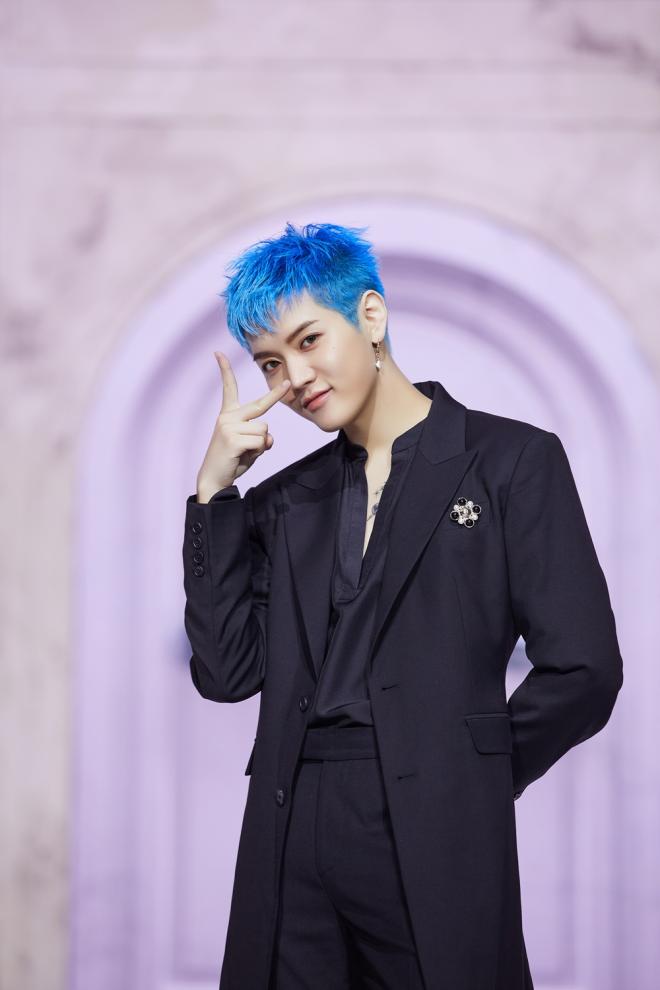 Right after, all members went back onstage to greet the media again. And after a long time, the legendary “Showtime! NU’EST Time!” greetings were made by the members altogether. Then, with a short individual introduction, they sat down to answer questions from the media. 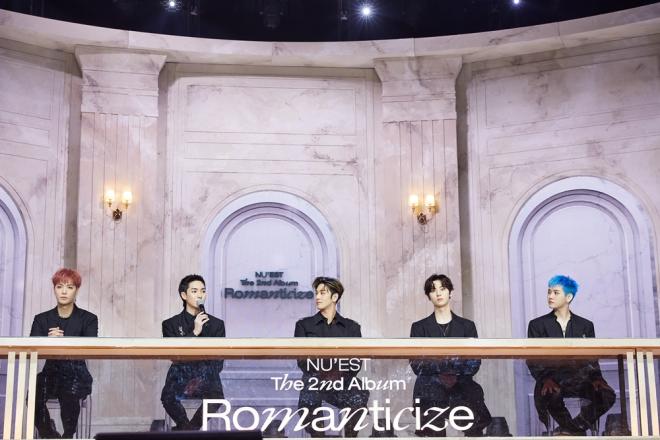 Officially starting off, JR explained how this album was made with many people’s hard work and efforts. Also, each member did their best during the album’s process and he was satisfied with the result.

The host then mentioned how Aron will be flexible during the promotion to which the singer responded that he was able to rest. Also, he was glad that the company prioritized his health and considered his wish to participate in the album’s promotion. 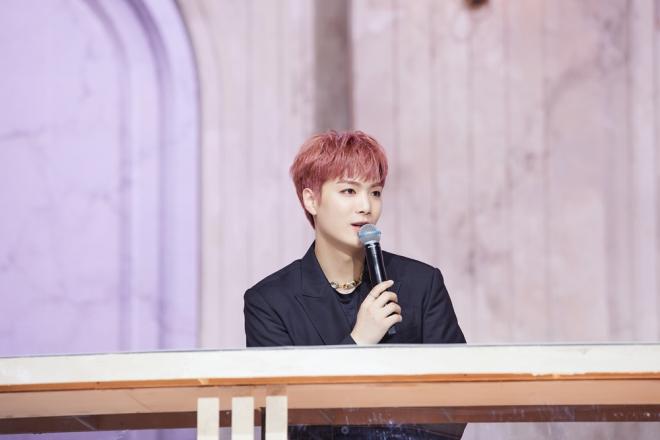 During the showcase, the members were asked to describe and explain the meaning behind their 2nd full album Romanticize. Baekho said that romanticize means turning something into more romantic or more than what it usually is.

The singer-songwriter added that this album would give fans the moment to be healed and consoled every time they took a listen. He also detailed that the title track “INSIDE OUT” is about facing a parting that you experienced nonchalantly. “But after a short while, the person realized that it’s not actually what you feel and your true emotions were revealed,” Baekho finished. 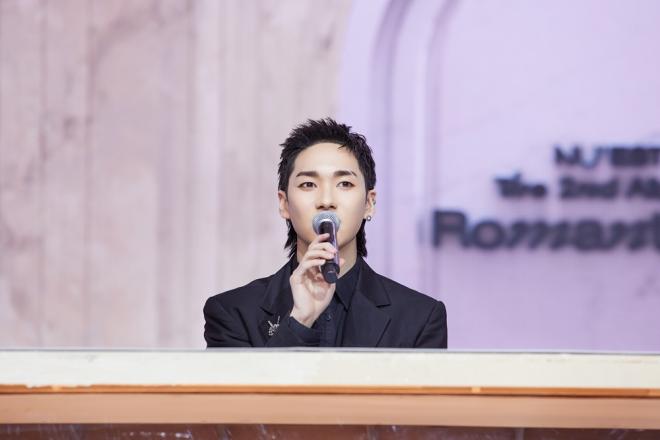 Next, Baekho firmly announced “This is NU’EST,” proudly testifying that the album will show NU’EST’s individuality yet perfection as a full group. Aron said that the highlight would be the sexy shoulder moves in the choreography. While JR affirmed that this album will show their extraordinary visuals. 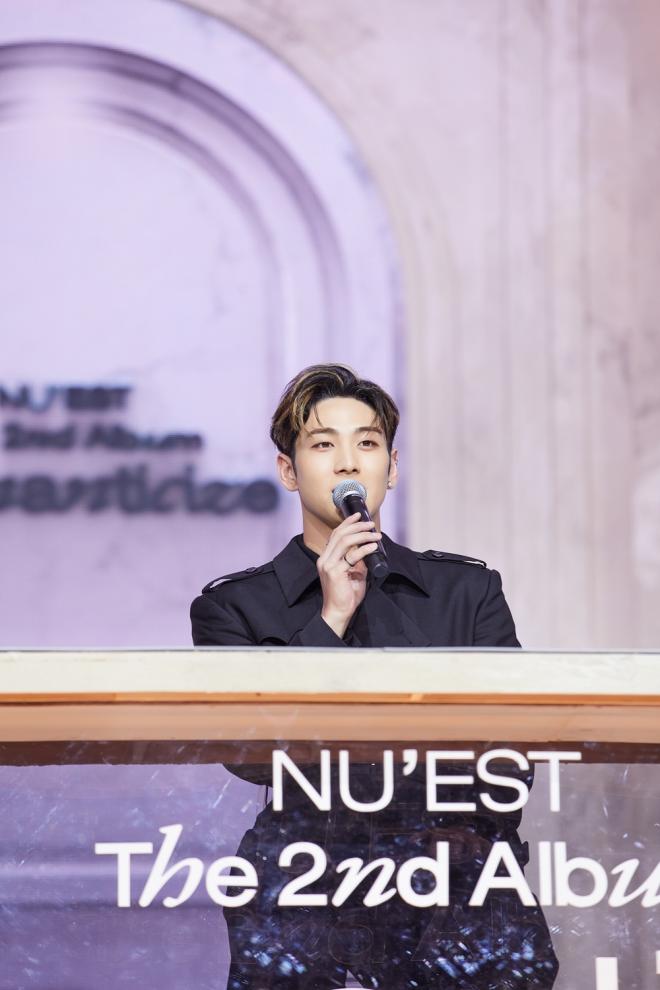 Minhyun also revealed that there are lots of unit parts in the choreography that fans should watch out for. Accordingly, some heartwarming and fun behind-the-scene stories were unveiled. Ren shared that he did a lot of things during his solo track’s recording.

There were times that he will start from scratch up to the point that he only rested for 15 minutes. “I think I was recording from 11PM until 8AM. When I left the recording room, the sun was already up,” the maknae added. 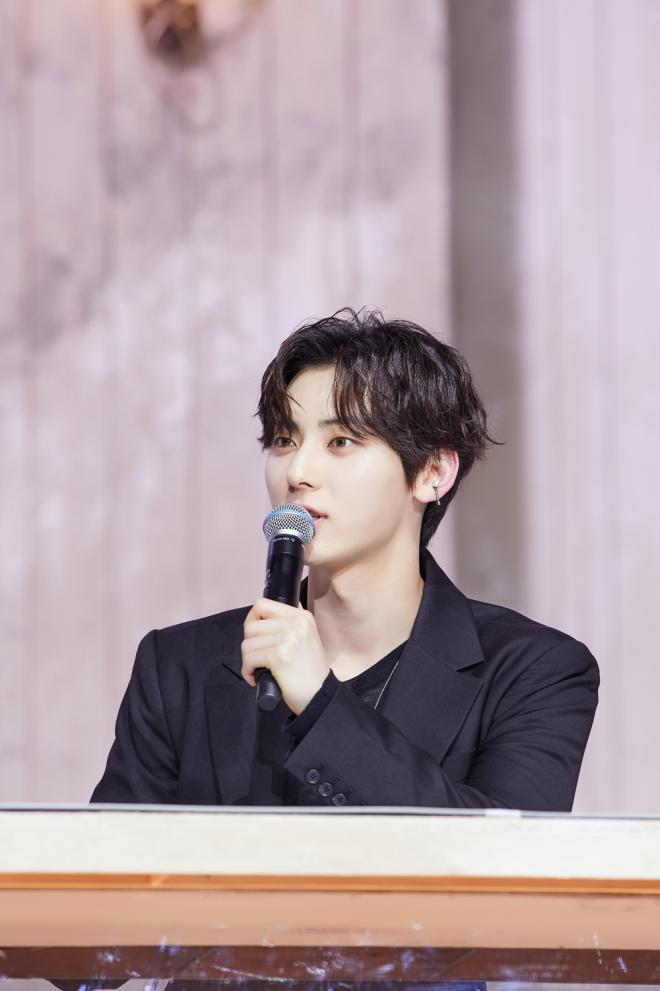 When asked about their definition of “romantic”, Ren cheerfully said that it is communicating with the press and his fans. Minhyun said that romance could be about finding your own happiness in the smallest things.

Baekho, the emotional poet that he is, said that the word itself is romantic. While JR mentioned that his idea of being romantic is seen in all the things that you feel and experience in your daily life. Agreeing with the crimson-haired leader, Aron also thought that living his daily life is romantic. 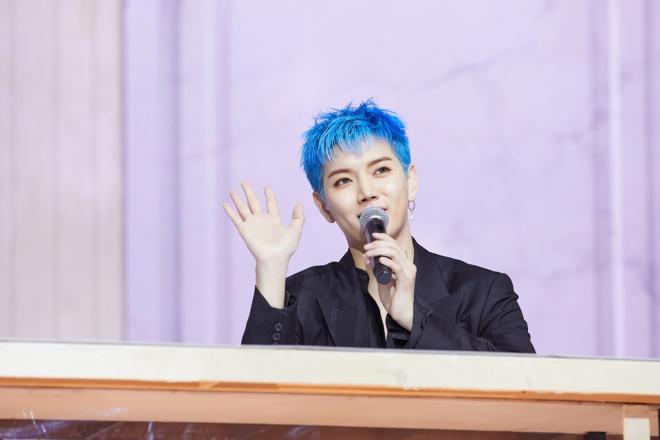 Wonderfully, NU’EST explained that the album Romanticize came to life as they hoped to break the stereotype that romance is only associated with love. As they suggest finding something romantic in our daily lives, NU’EST was able to express their individual sentiment better than before.

Explaining the album’s listening points and which parts they gave more focus in, Minhyun said that when they were preparing for the album, they brainstormed the meaning of romance and came up with the realization that people have different standards of it.

“We wanted to talk about what NU’EST thinks of romance,” the honey-voiced vocalist added. Minhyun also pointed that the members’ everyday lives turned to be different from years ago. “I hope that people will see romance in the smallest things,” Minhyun said.

Minhyun pointed out that his solo track’s lyrics talk about focusing on the sound within ourselves. Sharing his own experience, Minhyun said that he would put on his earphone to listen to his favorite music and will immediately receive consolation. “Earphones became the medium that I have in refreshing myself. It is where I find romance in my everyday life,” Minhyun added. 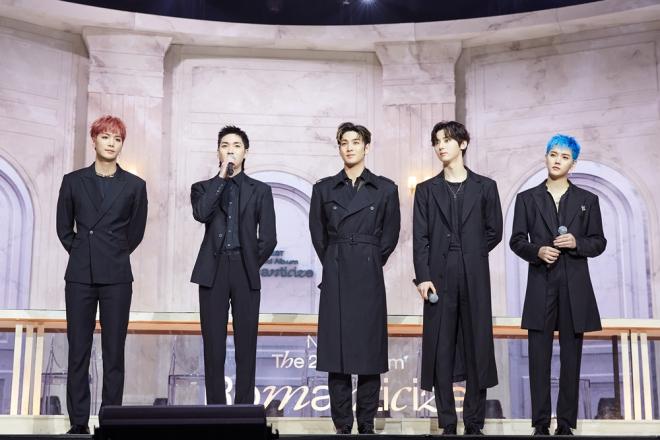 “My song “NEED IT” tells the challenges that a person experience through the process,” Baekho explained. While JR had a deep thought on what romance really means, he came up with other themes that can describe the word. In the end, JR incorporated romance in a rather different way for “DOOM DOOM,” his solo track.

Moving on, Ren described that his solo track “ROCKET ROCKET” is energetic and upbeat with a synth-pop genre. As first time writing the lyrics all by himself, Ren carefully gathered his thoughts to create a good result. Aron wanted to contain his candid thoughts as he wished fans would like his solo track and listen to it a lot. “The song is about me becoming myself in NU’EST.”

After Minhyun’s sensational portrayal of Count Axel von Fersen in the musical Marie Antoinette and Ren’s wonderful act as Jamie in Everybody’s Talking About Jamie, the rest of the NU’EST members also take on the challenge of acting. Baekho said that Midnight Sun was his first challenge as a musical actor and that he still can’t believe he was starring in it as a lead. Relatively, JR will also appear in the Korean drama I’ll Be Your Knight.

Afterward, more questions from the media came over. One of them pointed to NU’EST’s creativity in releasing their teasers. Aron said that it was interesting every time they release teasers through the concept homepage. Especially during the past eras, as fans always try to decipher it. Once, during The Table promotions, fans needed to answer mindblowing quizzes before they see the concept photos. Ren also extended his curiosity on fans’ reactions with the way they release concept photos and trailers.

“As a member of NU’EST, looking at the members interest me that we are all different so we wanted to show it to fans. That’s why in the solo tracks, we tried to express our own individuality.” — NUEST Baekho

When asked to share their inner emotions during the nine years they’ve been together as a group, JR admitted that it’s still hard to believe that they were able to last until today. The humble leader then said that being with the group makes him happy. And he wishes to go through this promotion with stable health and not get injured along the way. 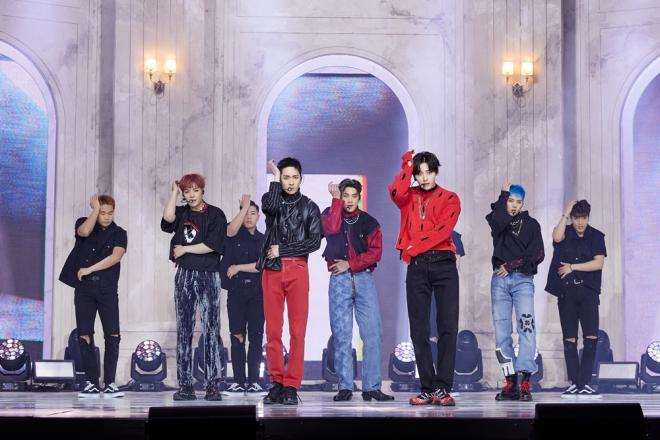 Thereafter,  the media showcase for Romanticize kicked off. They got off the stage to change their outfits while the music video played. The members then came back with their performance of the title track “INSIDE OUT.”

Looking awesome and gorgeous at the same time, the members did their best to show what they’ve been preparing for the past months. The spoilers that they’ve dropped in their several lives and posts in the Weverse app were seen in the choreography, especially on its point dances.

Notably, the choreography looked well-prepared and it is obvious that this album would reach the top.

To end the NU’EST Global Media Showcase for Romanticize, each member extended their hopes to meet fans personally as soon as possible. Minhyun promised that they will show all the special content they prepared. He also wished that fans would receive all of it happily.

Adding to that, JR revealed their music show win pledge. As the music video includes a lot of dominoes, they promised to bring huge dominoes on their first music show win.

Baekho expressed his gratitude to fans who patiently waited for them to return. He swore they will continue to return all the love they received in the long run.

Ren extended his warmth to fans who stayed with them even though times were a bit hard for each other. He also hoped that all those who will listen to their album will come up with their own idea of romanticism.

Meanwhile, NU’EST had released its 2nd full album Romanticize today, April 19, at 6PM KST on various music streaming sites. Alongside, the music video for the title track “INSIDE OUT” is also unveiled in HYBE Labels’ official YouTube account.

Hellokpop thanks HYBE Labels for the invite to the media conference. Event covered by Bea Melisse Ibanez and Khrisma Virgilio.