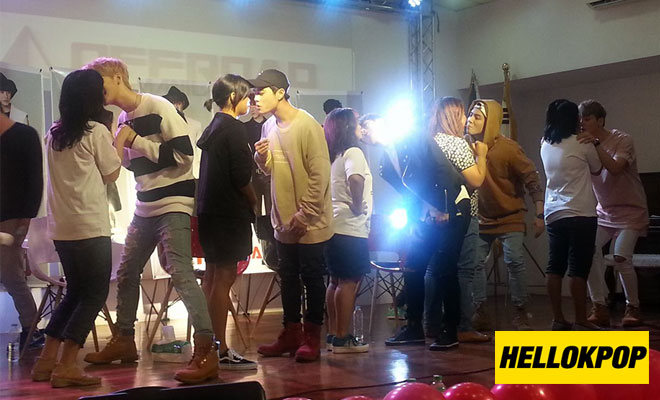 An exclusive and intimate OFFROAD fan meeting to remember.

The first and exclusive fan meeting was open for the registered members of the OFFROAD Philippines fan club. They had the chance to get up close with the five charming boys, namely Harang, Rio, Habin, Kino, and Daewon. 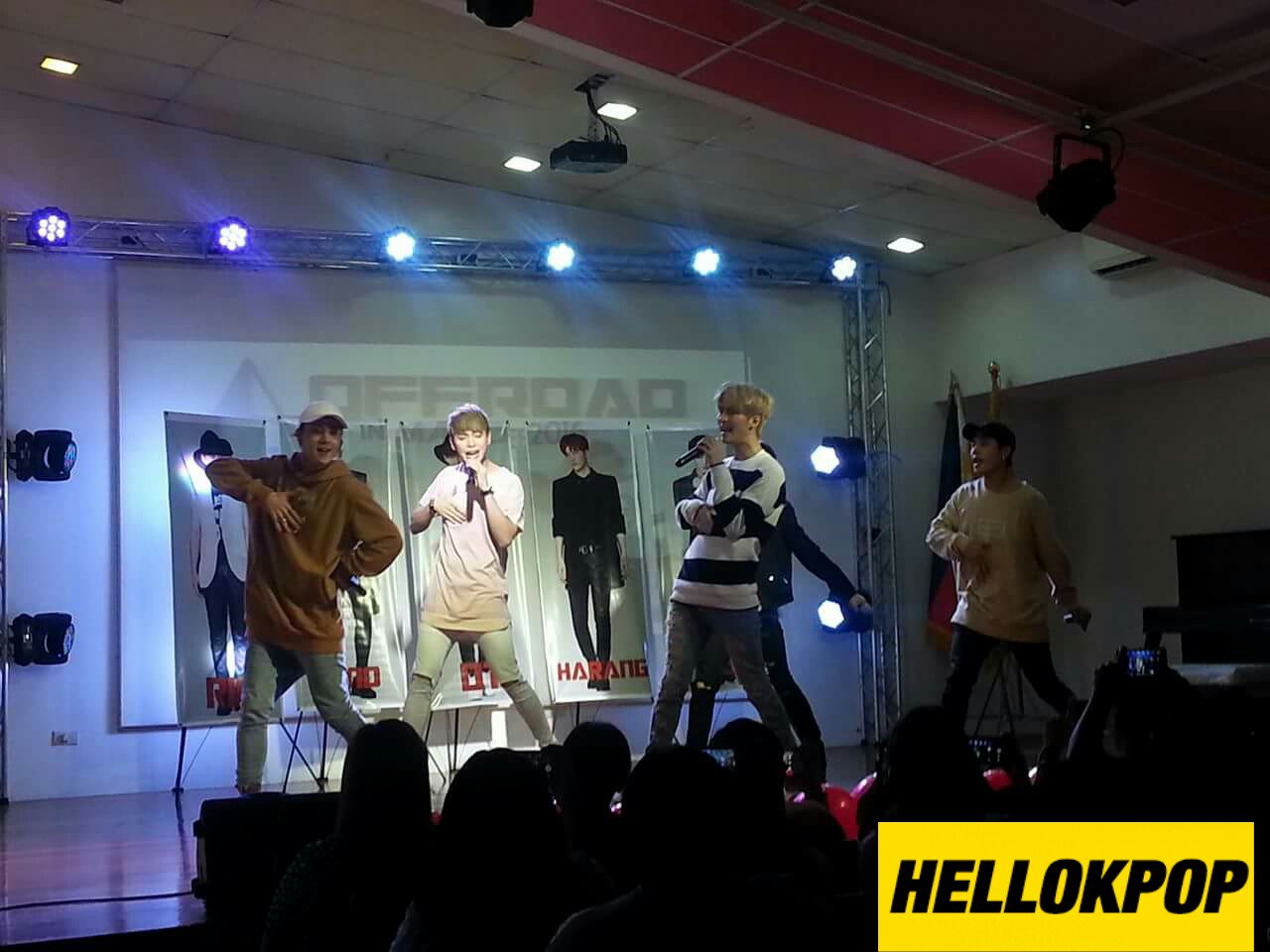 As the lights in the hall dimmed, OFFROAD entered the stage with their passionate and catchy debut single Bebop. It was a very fitting opening number that immediately warmed up the thrill of the audiences.

After the performance, the group did the traditional Korean 90-degree bow to formally start the fan meeting.  Each members then introduced themselves to the fans in their unique ways such as rapping and saying Filipino phrases like “Mahal Ko Kayo” (I love you all) and “Maganda Ka” (You’re beautiful) among others. 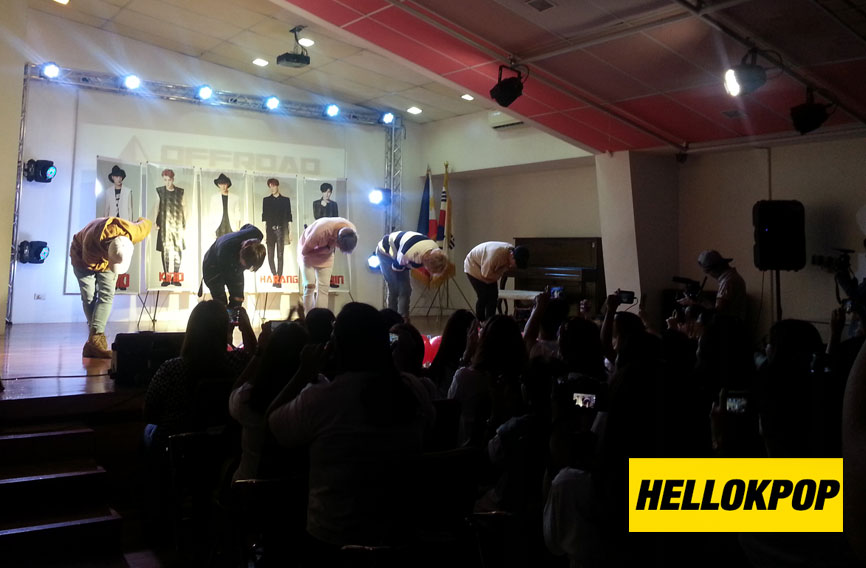 Prior to the start of the show, the fans were asked to write a question for the members of OFFROAD, which were then used during the interview segment of the program.

The boys each picked a question that they wanted to answer, and responded in an honest and casual manner. 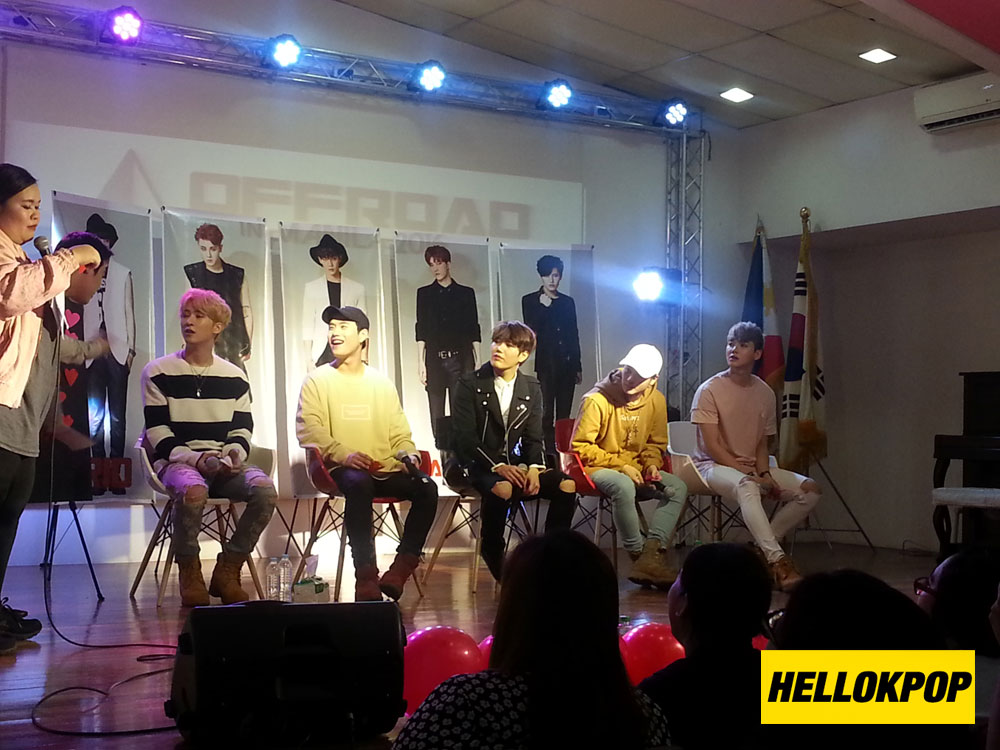 The boys as they listened closely to the questions

One of the highlights was Harang’s response to the question, “Who snores the loudest?” He revealed that it was Kino, and the other members were quick to save Kino from shame by explaining that it was because he is usually tired from composing songs.

Another is Rio’s display of his logical reasoning in an answer to “Who would he save if OFFROAD ends up drowning?” He charmed the audience when he answered that he would save Harang, simply because he is capable to think of ways to save the rest of the group!

The lucky fans who were present came in for a two-hour event with games full of thrill and skinship.

The first game is a trivia game. Fans who answered correctly received an instax photo with an OFFROAD member as a prize. Unexpected hugs were a bonus too! 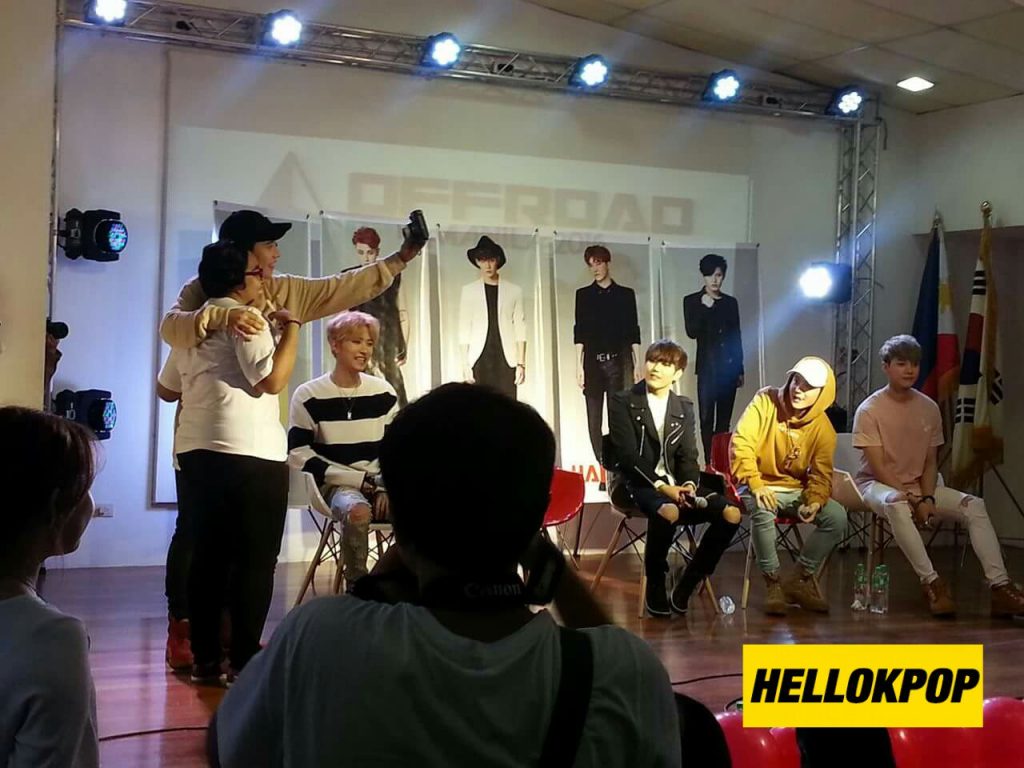 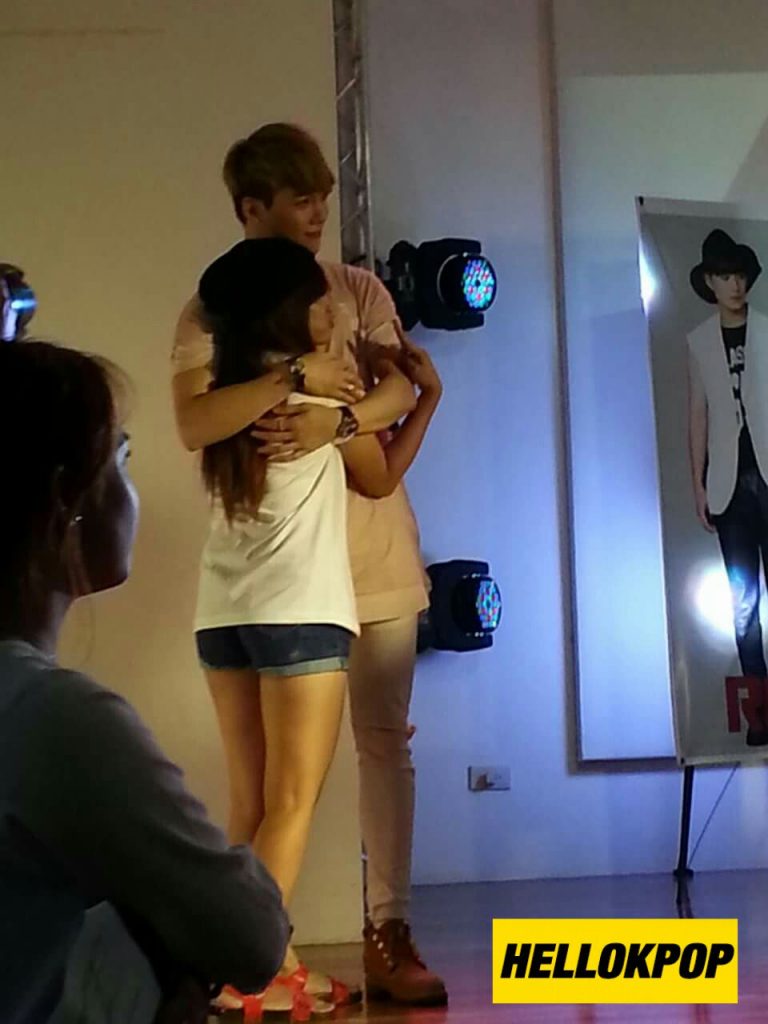 The second game was called, ‘The Best Kilig Moment’ (Kilig is a Filipino word to describe the feeling of exhilaration due to a romantic experience). This game is played by a fan and an OFFROAD member who will re-enact a breakup scene.

After the fan dropped the line, “Break Na Tayo” (Let’s break up), the boys would give her a back hug. Because this is every fangirl’s dream scene, it doesn’t matter who acted the best and won as the lucky girls took home an unforgettable back hug from OFFROAD as a prize. 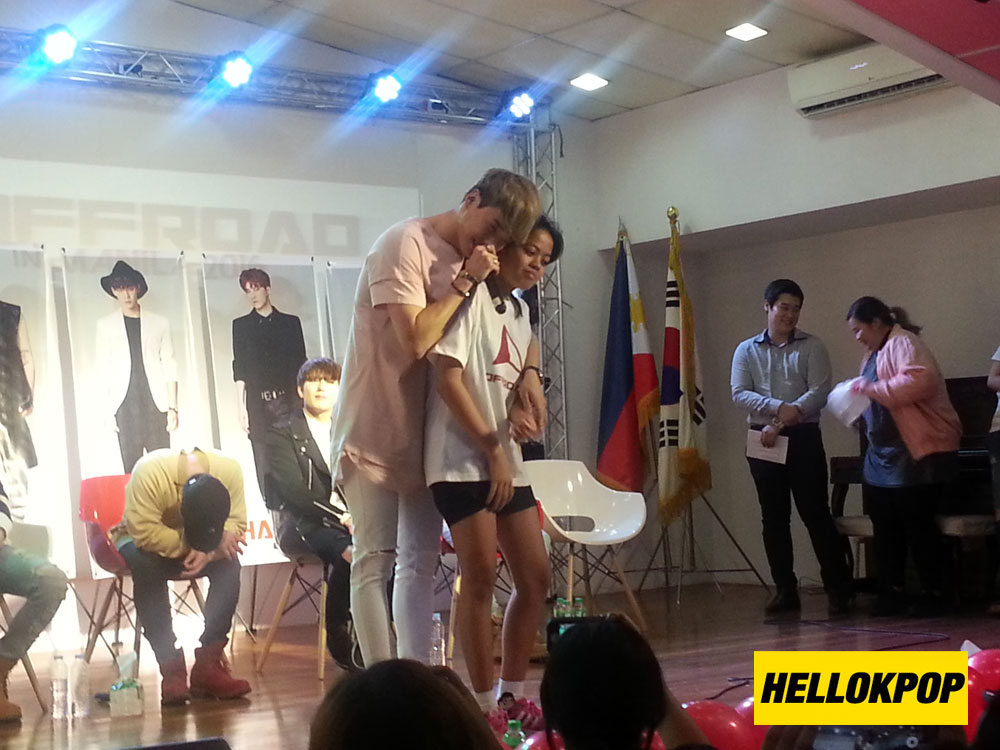 Daewon giving a back hug to a lucky fan

Save the best for the last as the boys and  audiences prepared themselves for the popular Korean game, Pepero Game.  Everyone enjoyed as the pairs got closer to each other and became more competitive! 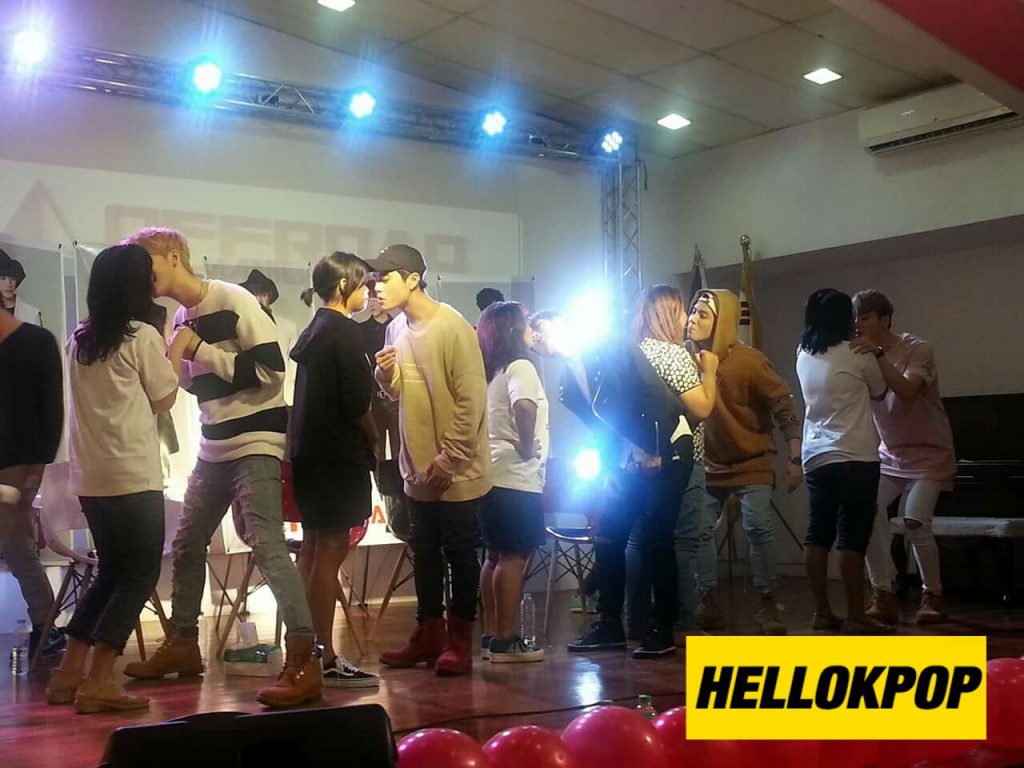 This viral photo says a lot. Check it out on our Twitter page. 😉

Perks and Wonderful Memories For All

Despite being their first time in the country, OFFROAD felt comfortable around the Filipinos. OFFROAD Philippines fan club presented a cake for the boys to officially welcome them in the country. 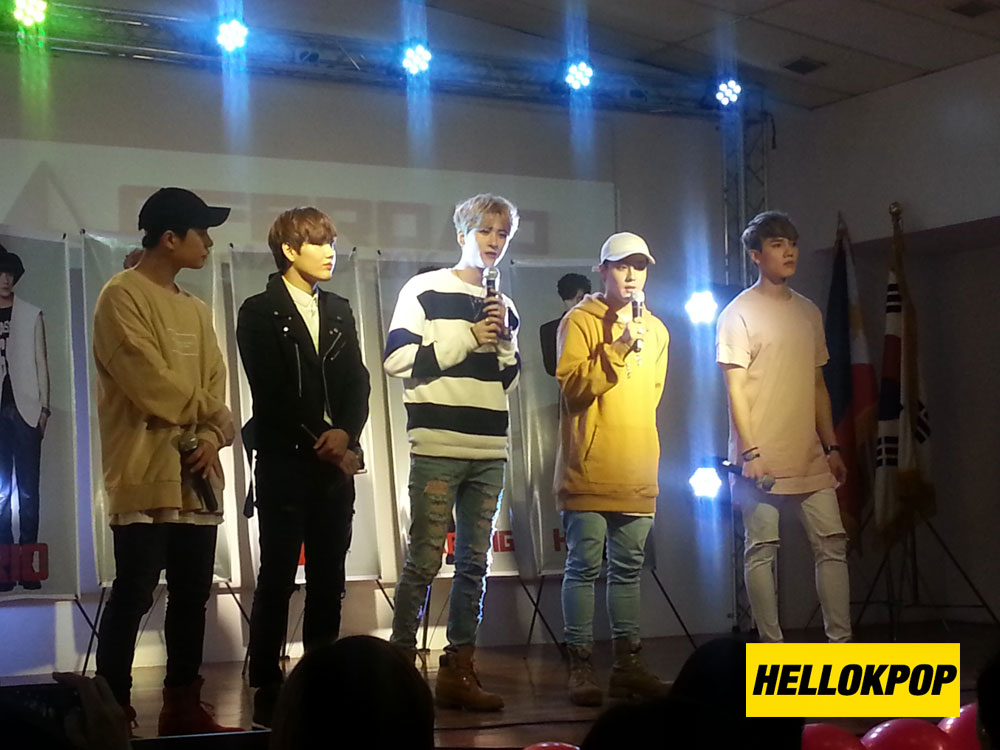 They returned their gratitude by showing more of their vocal skills, and performance of a Filipino song, Huwag Ka Nang Humirit by James Reid.

Prior to the fan meeting, they revealed in a press conference that given a chance to collaborate with Filipino artists, they would want to do it with Filipino actor and artist James Reid. 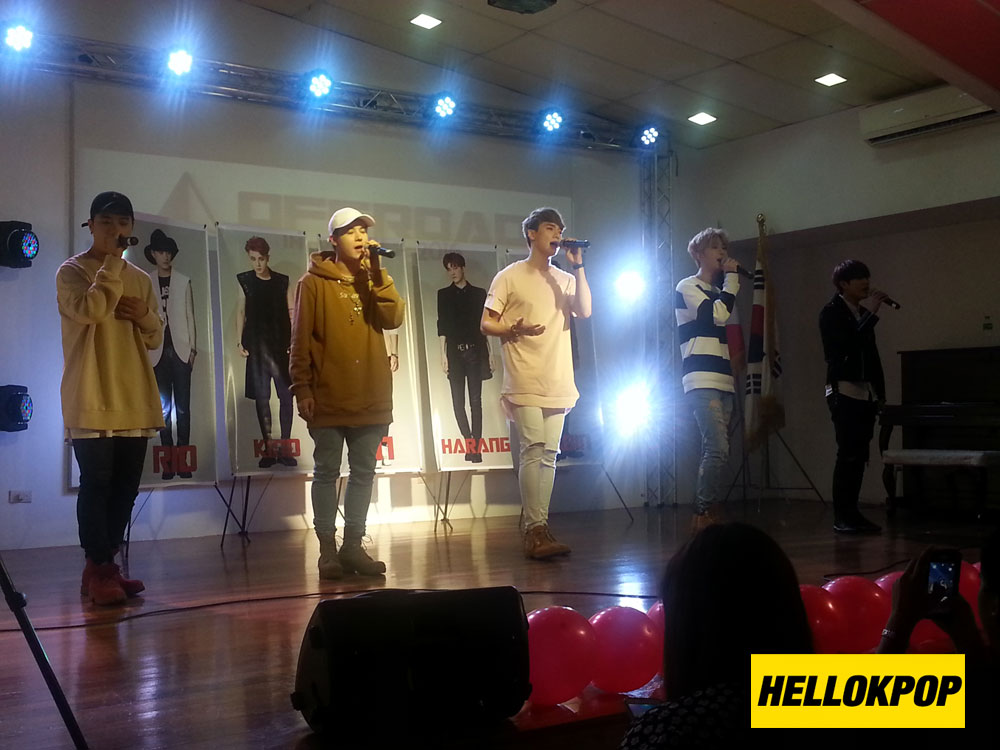 OFFROAD singing their hearts out to Filipino fans

The finale song was Head Banging, their second digital single, a track produced by BLOCK B‘s Zico. After which, it was followed by the meet-greet-autograph signing for all attendees, as well as group photos for selected few. 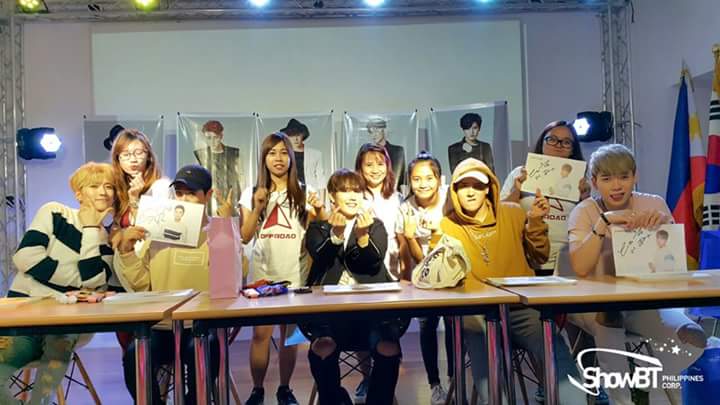 OFFROAD The First Fan Meeting in Manila was made possible by Show BT Philippines Corp. Hellokpop would like to thank Ms. Andhie for the kind invitation.

Hellokpop, as an independent Korean entertainment news website (without influence from any agency or corporation), we need your support! If you have enjoyed our work, consider to support us with a one-time or recurring donation from as low as US$5 to keep our site going! Donate securely below via Stripe, Paypal, Apple Pay or Google Wallet.
75
SHARES
FacebookTwitter
SubscribeGoogleWhatsappPinterestDiggRedditStumbleuponVkWeiboPocketTumblrMailMeneameOdnoklassniki
Related ItemsManilaOFFROADPhilippines
← Previous Story More Than Just An Entertainer: The Other Side Of Brian Joo That We Never Know
Next Story → Meet Jenny Kim Who Represents South Korea In Miss Universe 2016