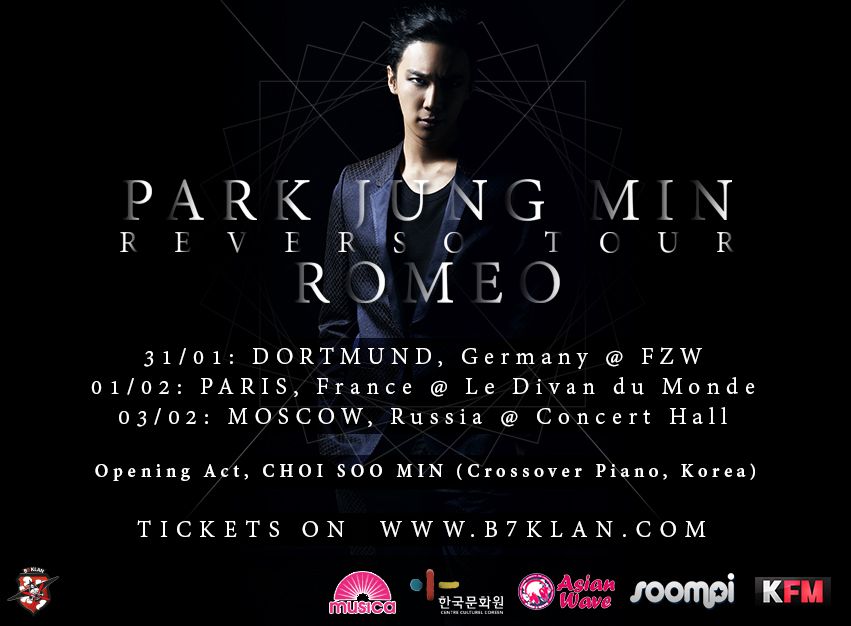 Park Jung Min answers questions about life, acting, and his next musical release!

By The Editor | January 21, 2014
FacebookTwitter
SubscribeGoogleWhatsappPinterestDiggRedditStumbleuponVkWeiboPocketTumblrMailMeneameOdnoklassniki

As SS501 member Park Jung Min embarks on his first ever European tour, hellokpop had the opportunity to ask the star some questions.

Called the ‘Reverso Tour’, Park Jung Min chose the name to reflect the two sides of his musical career. Lucky European fans who get to see him perform live will see the ‘…brightness of Park Jung Min and the darkness of ROMEO [his Japanese alter ego].’ Starting in Dortmund, Germany on January 31, Park will then move to Paris, France on February 2, and Moscow, Russia on February 3. There are already multiple fan projects surrounding his tour and to get more information, you can contact Bonjour Corée.

Crossover pianist Choi Soo Min will accompany Park for his tour as the opening act. Starting out as a boxer, Choi gave it up to accomplish his dream of becoming a pianist. Highly trained, Choi had to overcome a unique handicap gained from intense boxing training in order to play the piano softly. He now has his own style of playing Korean classical music.

Check out the Q&A with Park Jung Min below:

HKP: When is your next music release? Either album or new single.

I am planning to release a new album in April, Both in Japan and Korea.

HKP: If so, can you give us a bit of information on the kind of music fans should expect from you?

I am thinking to make different styles of music, but the concept is still a secret, please look forward to it.

HKP: What do you expect from your European fans? And what should they expect to see from you?

Actually I am still nervous to be in here, I wish fans in Europe could come to the concert, give me a warm welcome, it will make me less nervous and feel powerful on stage; I will do my best performance.

HKP: You were last in a musical in 2010. Can we expect to see more musical performances in the future?

I just finished one Musical which is called” Summer Snow” in last December. It will be nice if I have the opportunity to perform in a musical once a year in the future.

HKP: You’ve unfortunately had to cancel the London portion of your tour. Do you have a message for your UK fans? Will you be coming to the UK in the future?

I really regret that I couldn’t be in London this time, thank you for your love and supports in UK as always, I will definitely come to UK in the near future.

HKP: Are there plans for a bigger tour soon? There are other regions of Europe, let alone the rest of the world who would very much like to see you live.

I will focus on preparing my new albums first, other tours are on the planning schedule, please stay tuned.

HKP: Your last Korean TV appearance was in 2011. Are there any plans for a Korean drama or film role in the future?

Of course, there are movie shooting schedules already planned. Shall having good news to announce soon.

HKP: You turn 27 later this year. Where do you see yourself in five, maybe ten years? Still in the entertainment business?

After 5 or 10 years, I think I will still be in this entertainment industry, when I become a senior, I may open a management agency, to train up talented teenagers.

HKP: Finally, do you have a message for all your fans?

Hello, my European family, I will be there soon, can’t wait to see you all, let’s meet at the concert and enjoy the show together.

Special thanks to Torpedo Productions and B7Klan and, of course, Park Jung Min. Stay tuned to hellokpop for photos of Park Jung Min’s upcoming concert!