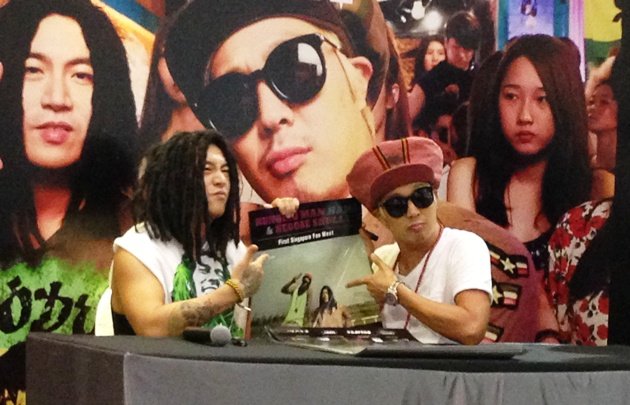 Reggae Friends – “Skull, have you ever felt jealous of HaHa?”

Haha: I feel good. This is my first time in Singapore and I’m really excited. Thank you media for coming down!

Skull: I heard that there are a lot of beautiful girls here in Singapore!

Q: Is there any food you would like to try while you’re here in Singapore?

Q: What is it like having dreadlocks in Singapore? Is it uncomfortable?

Skull: I’m used this hair since I’ve had it for a couple of years. So I don’t feel uncomfortable.  Sometimes, I want to swim…it can be troublesome, but it’s okay.

Skull and HaHa on their friendship

Q: Skull, have you ever thought of appearing on ‘Running Man’? Was there any time when you felt jealous of HaHa’s skyrocketing popularity?

Skull: Yes of course I’m jealous! (“Why? Why?” piques HaHa) I really respect him and appreciate his efforts in helping to bring me here to Singapore as well! It is my honour to perform with HaHa here in Singapore!

Q: What is one surprising thing about each other that the public doesn’t know?

Skull: HaHa is more tough and manly than he looks! He can hold his liquor very well!

Haha: Skull is very fit! He has a really hot body. If you come to the fan meet, you will get to see some of it!

Haha: For Skull, he really needs to meet a nice girl here and get into a relationship!

Q: Skull, can you describe your ideal woman?

Skull: Let me know your phone number! (to the reporter who asked the question)

Skull’s and HaHa’s take on reggae and their collaboration

Q: HaHa’s son is called ‘Dream’, so what is the ultimate ‘dream’ for the Skull & HaHa collaboration? What is the dream the album belies?

Haha: Skull is the pioneer and one of the only few musicians in the reggae scene in Korea, and I love reggae. But sadly, reggae’s not as popular in Korea. We hope that we can popularize reggae quickly and can spread the love for reggae, and ultimately be able to perform reggae on stage often and have a reggae festival. Skull has been on the Japanese music charts and I hope that Skull become as popular as Psy!

Q: Are there any challenges in doing reggae music?

Skull: Doing reggae in Korea is a lonely journey, but its gaining attention in Korea and Asia and we feel proud that we are a part of it. We have a hard time, but as people show interest in listening to reggae music, especially music, we feel very proud right now.

Q: What’s the best thing about promoting together instead of promoting as a single artist?

Skull: We live in totally different worlds. I do underground music and HaHa is an entertainer and singer who is more known to the public and our differences complement one another’s. There are pros and cons, but it is definitely helps to add colour to our performances. We complement each other because we have different backgrounds.

Haha: Also, our personalities are a perfect match!

Q: How did you first meet one another and started making music together?

Skull: We met on ‘Infinite Challenge’. While I was abroad, HaHa called the organizers and asked if it was possible to rock the stage with reggae music, and the very next day, I went to Korea and we made the remake of ‘From one fool to another fool’. We were very confident of our song, and the results were unbelievable! We ranked five! And that’s the story of how we met.

Q: Were there any challenges while making music for your album this time?

Skull: We remade the song Rappa Muffin and it was really difficult. However, this version has more energy than the original one, so we are happy with it!

Q: The new single is called Rappa Muffin which was first released in 2005. Why did you choose to remake this song with HaHa?

Skull: HaHa really loved this song and we think we can rock this song on stage as it is full of energy! That’s why we remade it.

Q: How did you get interested in reggae music?

Haha: I used to like hiphop music but one day, I had a chance to perform reggae on stage. It attracted a lot of attention and I enjoyed myself, and that was how I started becoming interested in reggae music.

Q: If you’re not doing reggae now, what else would you be doing?

Haha: I think Skull could be a hairdresser who does braids for others-reggae hair!

Skull: HaHa would be.. running a restaurant? A street stall! (Both break out in laughter)

Q: Skull has been featured in Psy’s music video, so are there intentions for further collaborations with other artistes ?

Haha: If we could appear on music videos, it would be our honour. Since Skull has appeared in PSY ‘s music video, he should appear at least once in ours too!

Skull: Actually, I would to make some music with the beautiful women in Singapore! (laughs)

Q: HaHa, Congrats on being a father! Now that you’re a father, would you change your image on Running Man to become a role model for your son?

Haha: If the show requires me to do it, I will! I can do even bigger and greater betrayals!

Q: When is the cast coming to Singapore for a fan meet?

Haha: I don’t know!  Maybe soon. When the members have their schedules sorted out, we will come! Kim Jong Kook came previously, and Lee Gwangsoo would be coming soon.  When the Running Man cast will come depends on the availability of all the members.

Q: Have you tried singing to your baby yet? Does he like reggae music?

Haha: Gospel songs! My mother is a preacher, so I sing gospel songs. (To view HaHa singing the gospel song, click here)

Q: Just out of curiosity, why did you dye your hair blonde?

Haha: It’s not blonde! It’s white hair! I tried to disguise them. Kidding. After getting marriage, I felt like I had to take better care of myself, so for the first time in fifteen years, I tried this new look. If you think it’s bad, I will dye it immediately!

Comments on the Singapore showcase and Korea concert

Q: Will we be seeing anything special tomorrow at the showcase?

Haha: We’re not an idol group so we don’t have any fixed choreography. We want to show our passion and gratitude to our fans on stage tomorrow!

Skull: Our performance is not complete without our audience!

Haha: We’re going to get wet on stage, and the audience will get wet! There will be water canons so we can make everyone wet! That’s the kind of passionate concert we will have in Korea!

Skull and HaHa had their first ever showcase in Singapore on the 20th of July, 7pm, at Zouk. Holding on the their promise of rocking the stage with all their might, the duo had the crowd grooving to hits like Rappa Muffin, their new remade single, and also favourite hits like Busan Vacance.

Both expressed their thanks to their Singaporean fans after the showcase on Twitter, as seen below: 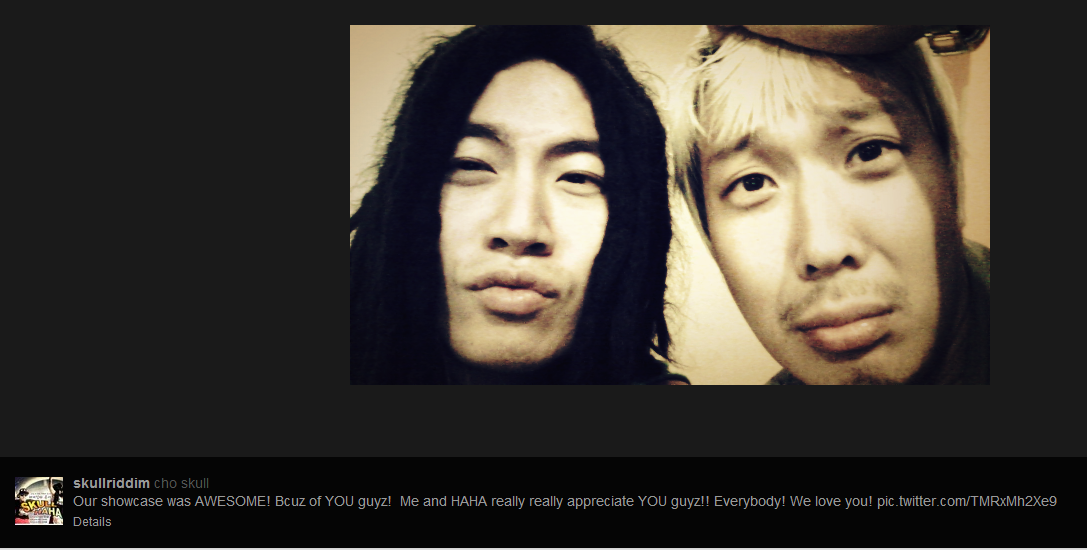 “Our showcase was AWESOME! Bcuz of YOU guyz! Me and HAHA really really appreciate YOU guyz!! Everybody! We love you! ”

Hellokpop, as an independent Korean entertainment news website (without influence from any agency or corporation), we need your support! If you have enjoyed our work, consider to support us with a one-time or recurring donation from as low as US$5 to keep our site going! Donate securely below via Stripe, Paypal, Apple Pay or Google Wallet.
FacebookTwitter
SubscribeGoogleWhatsappPinterestDiggRedditStumbleuponVkWeiboPocketTumblrMailMeneameOdnoklassniki
Related ItemsBusan VacanceHaHaInfinite ChallengeKim Jong KookLee GwangsooPsyRappa MuffinRunning ManSingaporeSkull
← Previous Story B2ST shares the hard time they had once upon a time
Next Story → Alexander talks about his new movie, U-KISS and life lessons