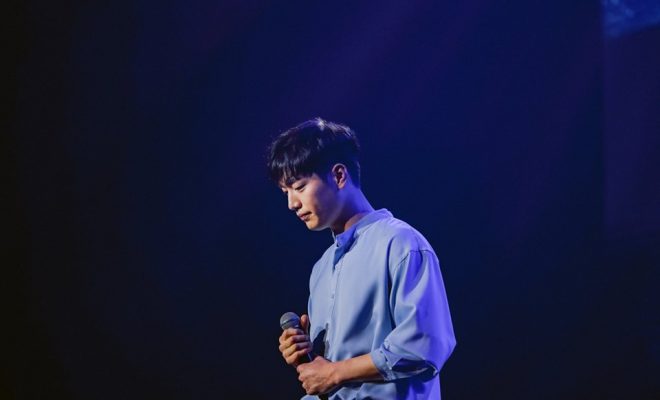 Streaks of fun games, dashes of spontaneous charms and scoops of sweet serenades made up the sweet concoction brewed at The Last Charm: Seo Kang Jun Live in Manila. 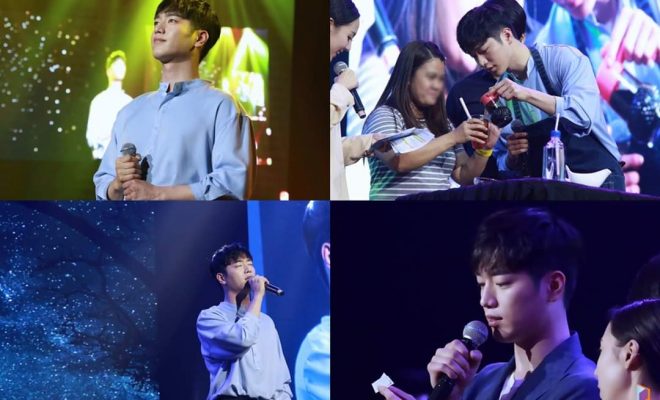 Endearing the attending fans, the actor fulfilled his initial promise of giving smiles to his faithful followers. Fueled with his genuine warmth, the artist flawlessly proved his impressive range of wit, charm, and talent.

From his honest and amusing answers to spontaneous questions, his striking song performances awed the appreciative crowd. Seo Kang Jun put a spell on his willing fans with his driven attitude to return the love he has been receiving endlessly.

Today, we take you back to the charming pit stops of Seo Kang Jun Live in Manila.

Sedating the eager crowd with his beautiful voice, the 5urprise member made his entrance dream-like. As soon as his euphonious voice filled the venue, a collective hush spread in the audience who have been looking forward to meet him. Effortlessly running the sweet tunes of an original soundtrack from his Are You Human drama, Seo declared his love confession with track “You Are My Love”.

“Really nice to see you Philippines. This is my first time to visit. I hope we have a good time today,” the actor said after his mellifluous opening song.

Greeting the crowd in attendance with his big smile, he sat down for a quick first-impression chat with host Sunny Kim. Revealing how he has always wanted to meet his Philippine fans, he relayed what he has been up to since his arrival. Additionally, he shared eating some nice local food. Expressing his eagerness to visit a popular island in the country (Boracay), the brown-eyed male beauty mentioned wanting to try scuba diving and snorkeling. 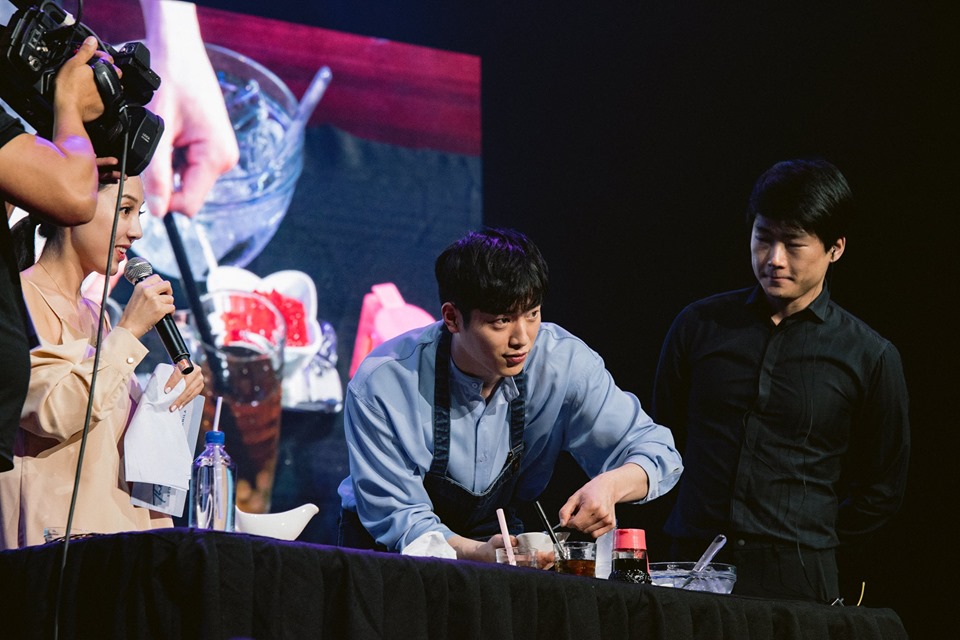 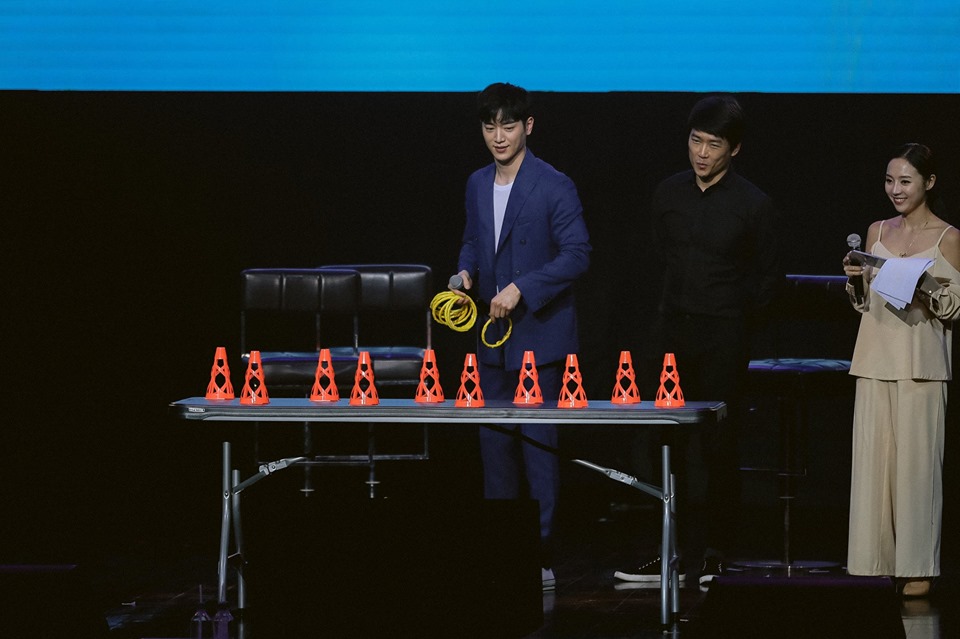 Seo enthused the fans as he gregariously participated in fun games with lucky fans chosen from a draw. Aside from signed CDs from Seo, contestants had a chance to win exclusive prizes if they beat their favorite actor in the games assigned to them.

In the “Ring Toss” game, Seo vouched confidence that he will be victorious, only to score one successful throw on the mini cones he targeted using mini rings. The result landed the winning girl a 10-second stare opportunity with the actor famous for his beautiful brown eyes. And yes, we were all jealous.

Thereafter, “Stack Attack” game ensued. With a set pattern of stacking up cups, the competing girls raced to become the person who can do it really fast. Getting the hang of it, Seo adorably coached the girls. Yet, as soon as his turn came, he showed his competitive spirit. Eventually edging out the girls, Seo Kang Jun completed the mission in astounding 46 seconds. 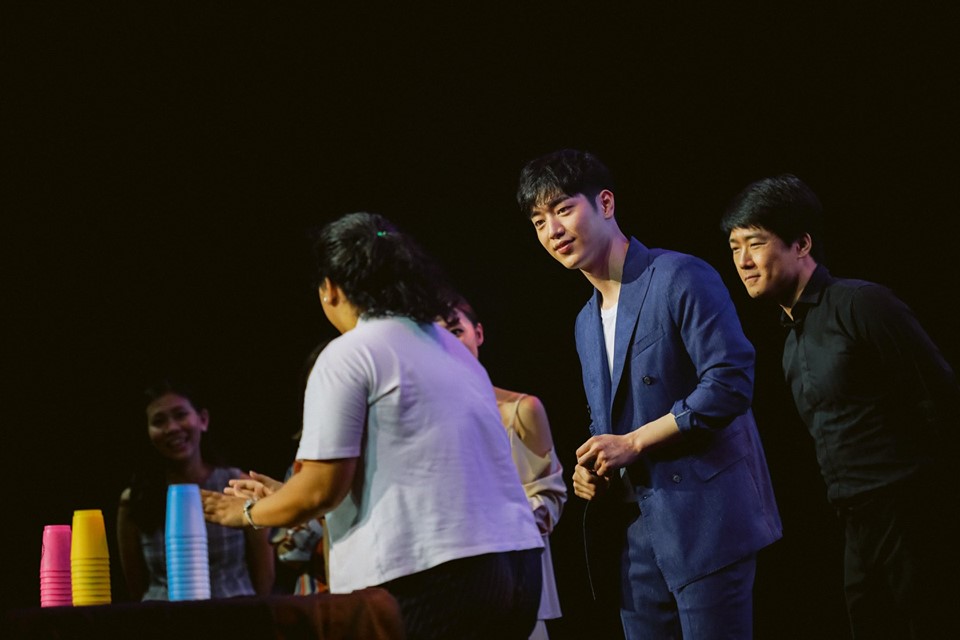 Before the last game, CDM Entertainment – the event’s amazing organizer, revealed winners of photo and video contests that were run prior to the fanmeet. The winners were invited to play the last game with the actor. Particularly, Seo cutely chuckled to the winning video and the man who posed to play his part as Namshin.

“Key to my Heart” marked the final game where Seo and the two participants were asked to find the right key to open a box. In between the contestants, Seo amusingly peeked on the progress of the girls as his competitive spirit seemed automatically triggered with interesting games. However, ladyluck was not on his side so the lucky winner got a 10-second hug from the “giant wish dice” that cause a jealousy ripple among the crowd.

All three games featured candid moments of the actor engaging freely with fans. Adding to that, he acknowledged each contestants he met in the game, even throwing a few “you are pretty” or “you look bright” compliments.

Last night we were part of the crowd who were charmed by #SeoKangJun!

Moving to the next part of the event, onsite attendees were treated to a quick video of Seo Kang Jun’s pictorial photos and drama character stills. Returning to the stage, he belted out “Thinking Out Loud” with impressive flair.

During the talk segment, Seo revealed picking the Ed Sheeran hit song so fans can sing along with him. He also cited how Are You Human is a memorable drama for him since he has always dreamed of playing two roles. For his character immersion, he watched Steven Spielberg’s film – Artificial Intelligence for reference. He added how the drama has a strong message about human interaction that’s why he takes pride of it.

When he was asked of the actors he look up to, he responded it to be veteran actor Han Suk Kyu. Incidentally, his upcoming drama Watcher will have him team up with the revered actor. Among Western actors, he mentioned Jake Gyllenhaal as an artist who inspires him because of his ability to distinctly draw variation to characters he has so far portrayed. 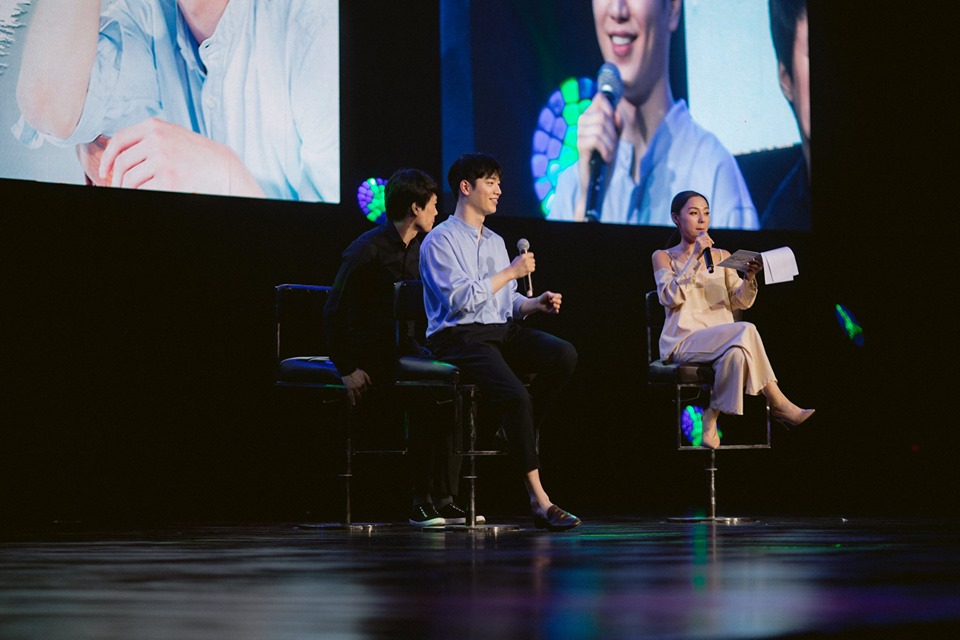 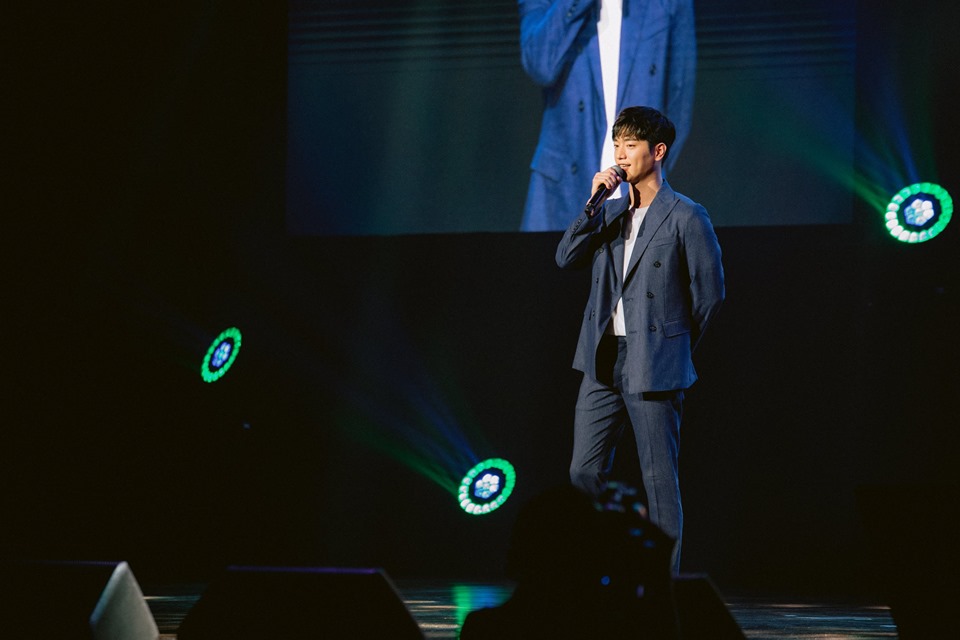 The 10 Things You Should Know About Seo Kang Joon

1. He likes Joon Young’s character in The Third Charm

Continuously delighting the audience with instinctive reactions and answers, Seo also relayed how he liked his character in The Third Charm. He remarked how a lot of people can relate to the drama because it talked about love, growth and pain.

2. He knows he is dating his fans and he is happy about it.

As a Korean actor with a fanbase to keep, the pressure to make fans happy is given. Acknowledging that reality, Seo shared how he cannot have a girlfriend anymore because he is dating his fans, and that he was okay with it at the moment.

3. He thinks aspiring Filipino actors should continue their dreams

Expressing his openness to working in the Philippines, Seo also encouraged the people in the audience who dream of becoming actors to pursue it. Referring to how Netflix has been streaming Filipino video content and how his acquaintances are familiar with it, he believed there are a lot of opportunities that will open in the future.

4. He likes samgyupsal a lot.

Modest and real, Seo Kang Jun picked working at a samgyupsal restaurant if he is not an actor because he loves samgyupsal.

5. He may have played a chef in his recent drama but…

Seo Kang Jun does not know how to cook. The confession surprised the audience, and an impromptu offer to cook for the actor also cutely surprised Seo, who inevitably relented. 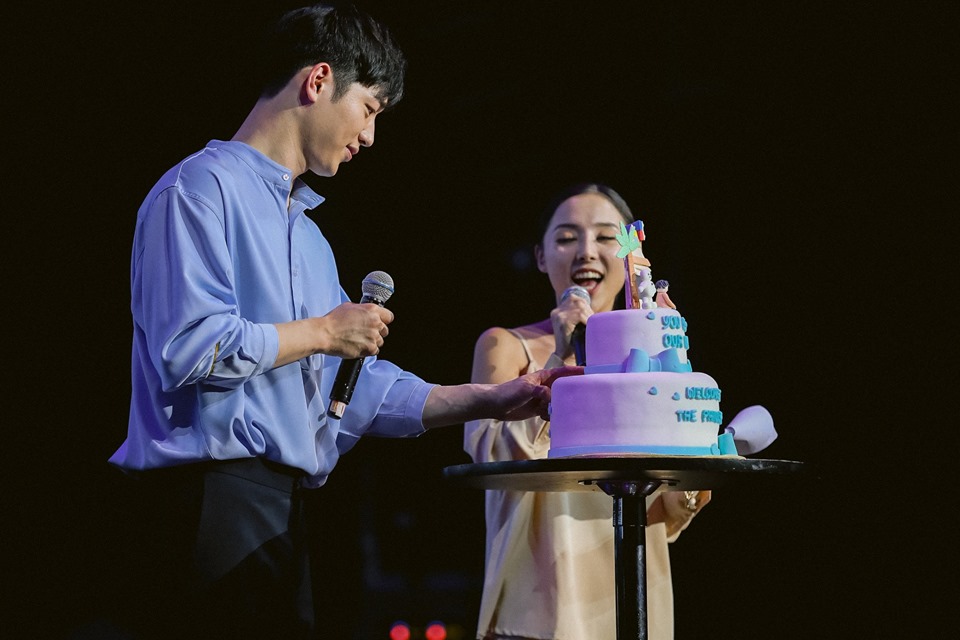 6. He does not think he is globally recognized

Displaying warm and respectful attitude, Seo’s humble nature adds up to the already brimming list of qualities to love about him. His noticeable exchange of responses to fans questions, even crazy blurts, says a lot about how he thinks highly of his fans by genuinely caring about them.

7. He feels pressured on how he can make fans happy.

Sincerely confessing the pressure to return the unwavering support of his fans, Seo often wonders why his fans like him. With that, he makes sure to prepare well on his projects.

8. He gives sudden gift at his fans’ request

Flinching at the suggestion of dancing, Seo Kang Jun cutely concedes through a fan lead and shows a sneak peek of his body wave at the event.

Fulfilling CDM Entertainment’s tradition, Seo tried out popular Filipino food. Munching the presented food with gusto, he exclaimed the local word for “yummy” and “super yummy” to the delight of the fans.

He specifically liked the served “lechon”, a roasted pork dish. He then got surprised at the strong vinegar flavor of the dip for “empanada de Ilocos”.

10. He knows what can make his fans happy.

Another cute segment in the fanmeet happened when Seo Kang Jun prepared a popular Philippine refreshment on-the-spot. “Sago at Gulaman” is a beverage comprised of tapioca pearls, jelly, sweetening syrup, vanilla, water and ice. Engrossed in the preparation, he took in suggestions from the audience and ultimately finished two glasses. Two lucky fans were able to drink the prepared refreshment of the actor.

As a venue for Korean stars to meet their fans in person, foreign followers of the actor were also in attendance. A lucky Japanese fan, won the special signed CD from Seo and even got a hug from him. We lost count how many times Seo praised and cheered up his fans. But one we highly appreciated is how he responded as much as he can to sudden “oppa saranghae” received from his fans on stage and from the audience. 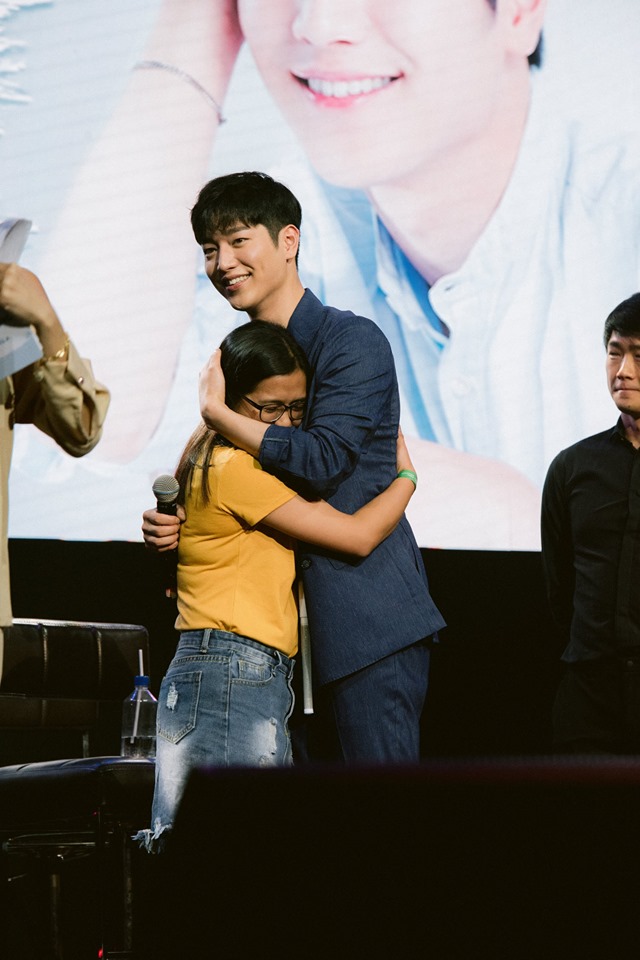 The best summer memory ever

For Seo Kang Jun fans whose dreams finally came true that night, they have also made their favorite actor happy by taking time to meet him in person.

A well-crafted fan video was played as a parting gift to Seo Kang Jun. Sending the actor a message that his Philippine fans will always defy distance to support him, the actor thanked all the fans in attendance for the precious cake and video gift.

Falling fast with his charm, the crowd was treated with a spectacular song number by Seo Kang Jun. His heartfelt cover of “Falling Slowly” mesmerized the crowd as he showcased his stunning singing voice.

“I hope you had a great time. I hope to see you again. Be happy and I will be back. Mahal Kita,” Seo said as he closed a memorable night with his fans.

Last night, #SeoKangJun showcased his limitless charms. From participating in the fun games, attentively engaging with his fans and striking impressive vocal performances — the actor-singer did it all. Watch his cover of "Falling Slowly" and be amazed on his beautiful tune. READ: https://www.hellokpop.com/exclusive/seo-kang-jun-live-in-manila-fan-meeting-recap/ #SeoKangJunLiveinMNL #SeoKangJoon #SeoKangJunInMNL Presented By: Fantagio & @cdmentph

Fueled with his genuine warmth, the artist flawlessly proved why he has been one of the most bankable actors of his generation. From his honest and amusing answers to spontaneous questions to striking song performances, Seo Kang Jun sealed the spell he put on his fans.

The Last Charm: Seo Kang Jun Live in Manila is brought to fans by Fantagio Group and CDM Entertainment.

Hellokpop extends gratitude to CDM Entertainment for the media invites to the press conference and fan meeting.