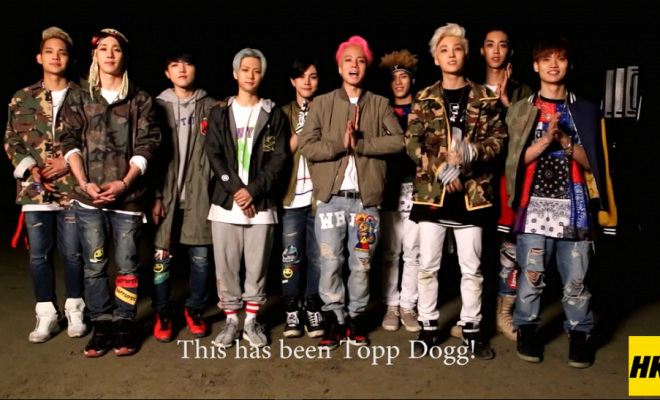 Topp Dogg Talk About Their Talents, Personalities And Future

Topp Dogg is back, fiercer and stronger than ever before!

Read: 6 Reasons Why You Should Catch Up With ‘The Beat’ of Topp Dogg

On 19th October 2015, Topp Dogg returned to the music scene with their all-new powerful ‘The Beat’. Their latest album signifies the group’s maturity and progression in a positive direction. By experimenting with various genres and foraying into different musical depths, the boys have produced a polished album with some great tracks that will give you surprises.

We were privileged to hold an exclusive interview session with Topp Dogg despite their incredibly busy schedules for the impending comeback, which was recorded right after the music video shoot. Before the interview, we also asked international ToppKlass to submit their questions to us so that lucky fans could get their questions answered.

During the interview, Topp Dogg talked about themselves in V app’s Rising Idol Series and BjooTV. They also showed their witty sides when they answered quirky questions from international ToppKlass. The boys said that they love to go back to Europe and the US soon, and promise they would go to anywhere wherever ToppKlass are. Finally, they also shared thoughts about their near future, with Pgoon wishing that the group will be recognized as real artists, and that each member has a chance to show even more of his individual abilities.

Hellokpop, as an independent Korean entertainment news website (without influence from any agency or corporation), we need your support! If you have enjoyed our work, consider to support us with a one-time or recurring donation from as low as US$5 to keep our site going! Donate securely below via Stripe, Paypal, Apple Pay or Google Wallet.
601
SHARES
FacebookTwitter
SubscribeGoogleWhatsappPinterestDiggRedditStumbleuponVkWeiboPocketTumblrMailMeneameOdnoklassniki
Related ItemslistquizTopp DoggToppDoggToppKlass
← Previous Story The After Party: APink Tribute Group Crowned Dance Competition Winner
Next Story → Nine Unforgettable Moments With FameUS And Asha From Their Meet And Greet Events In The Philippines