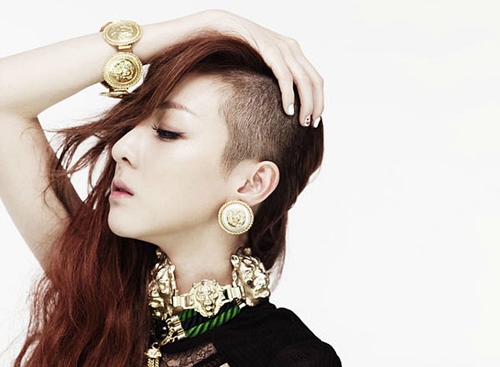 2NE1’s Dara shares her thoughts her on new hairstyle

One thing that cannot be missed about 2NE1‘s comeback is Dara‘s new trendy and bold undercut. The new ‘do is just about as shocking as Key‘s half shaved Mohawk hairstyle in SHINee‘s Lucifer.

Shaving part of Dara‘s hair off was recommended by CL as the leader was hesitant about shaving her own off. CL revealed:

“At first, our stylist told me to do, but I just couldn’t. So when I saw Sandara crying, I felt really bad. I was going to do it first, but I thought it might appear too strong, so I recommended Sandara Park, since she has a pretty face.”

Upon receiving the haircut, Dara felt overwhelmed by the major transformation and broke down into tears. She shared:

“CL suggested it so I tried it. I did shed some tears, but I do like it. I wanted to do something shocking and was worrying about what to do when she gave me this good idea.”

Dara has adjusted to her new hairstyle and is constantly shaving it as her hair grows progressively. Do you like her new hairdo?

Hellokpop, as an independent Korean entertainment news website (without influence from any agency or corporation), we need your support! If you have enjoyed our work, consider to support us with a one-time or recurring donation from as low as US$5 to keep our site going! Donate securely below via Stripe, Paypal, Apple Pay or Google Wallet.
FacebookTwitter
SubscribeGoogleWhatsappPinterestDiggRedditStumbleuponVkWeiboPocketTumblrMailMeneameOdnoklassniki
Related Items2NE1CLDarafashionhaircutI love youKeySHINeeundercut
← Previous Story EXO-K endorses The Face Shop
Next Story → SNSD’s TaeTiSeo for Elle Korea