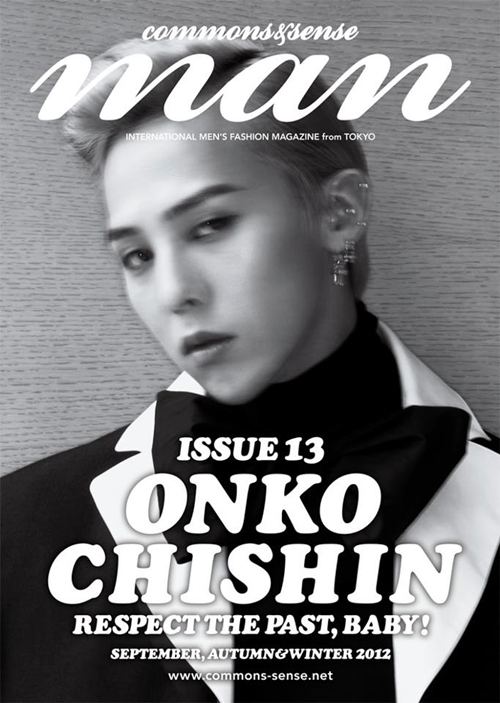 BIG BANG member G-Dragon will be featured in the upcoming 13th issue of the international men’s fashion magazine from Tokyo, commons&sense man. The issue is titled ONKO CHISHIN – Respect The Past, Baby! which translates into English as: understand the present by reviewing the past.

The 13th publication of commons&sense man will serve as the September, Autumn/Winter 2012 issue and features G-Dragon on the preview picture in black and white. The official issue will be released on September 27.

We need your support! If you have enjoyed our work, consider to support us with a one-time or recurring donation from as low as US$5 to keep our site going! Donate securely below via Stripe, Paypal, Apple Pay or Google Wallet.
FacebookTwitter
SubscribeGoogleWhatsappPinterestDiggRedditStumbleuponVkWeiboPocketTumblrMailMeneameOdnoklassniki
Related ItemsBigbangcommons&sense manfashionG-dragonONKO CHISHINTokyo
← Previous Story Wonder Girls’ Sohee for Vogue Girl
Next Story → Elle Korea features KARA’s Goo Hara