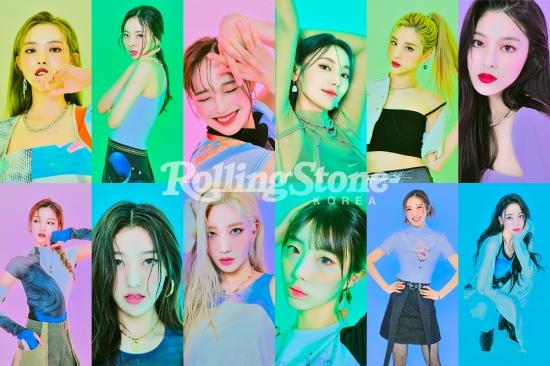 LOONA show off their individual charisma during a bright pictorial with Rolling Stone Korea. The twelve-member K-Pop girl group recently made waves with their latest title track, “PTT (Paint The Town).”

In the released image, LOONA captivates fans with the colourful photoshoot. Amidst swathes of neon lighting, the girls shine with equally eye-catching expressions and poses. The group demonstrates their unique magnetism, a factor for their skyrocketing success.

The artists made their latest comeback with their fourth mini-album, [&], and spoke to Rolling Stone Korea about their careers thus far.

The group’s recent music often provides messages of comfort and healing to listeners. Regarding this, Jinsoul explained, “It’s an honor and pride to be able to influence someone. It is also the reason why I dreamed of becoming a singer. I will become a better member of LOONA who develops further in the future.”

However, the road to becoming an idol is not easy. When asked about the difficulties, Heejin elaborated, “If I hadn’t been able to achieve my dream of becoming a singer, it would have been the most difficult for me in the end. Even if I am reborn, I want to become an idol, and this path I am taking now is always a great strength and comfort.”

Fans can read more about the members’ personal stories and see other pictorial photos of LOONA in Rolling Stone Korea‘s third issue.