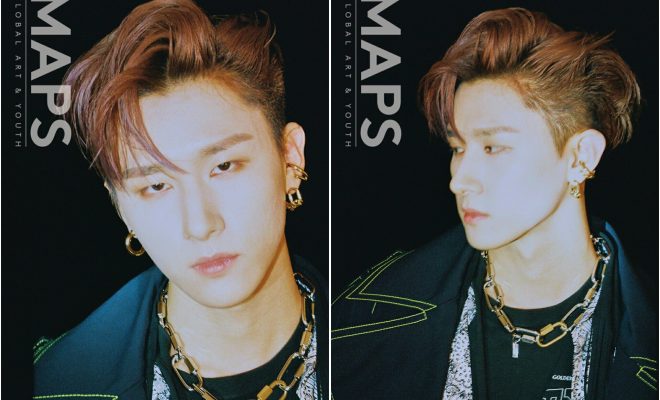 With that charismatic undercut look and intense gaze, MONSTA X’s I.M leaves no room to doubt that he is, indeed and absolutely, drop-dead gorgeous.

MONSTA X’s I.M took over the cover of fashion magazine MAPS’ May 2020 issue, where he drew attention by showing off his hip, colorful, and killer visuals.

In the released images from the photoshoot, the MONSTA X member perfectly pulled off colorfully-styled outfits amidst a dark background which put a greater emphasis on his gorgeous looks. In addition to an overwhelming, intense gaze, he donned outfits with vibrant colors and eye-catching patterns which further set a unique and dreamy atmosphere.

Playing off a wild, defiant look in his sharp eyes along with a languid aura, I.M also showed off a gentle charisma by sporting natural and smooth poses to the heart’s content.

Having captured fans’ hearts by showing a powerful and intense on-stage image as a member of MONSTA X, he exuded a different kind of charm in the pictorial by emitting a hip and dreamy atmosphere with a toned-down pensive mood.

During the photoshoot, I.M is also shared to have drawn admiration from the staff. This is thanks to him seeming widely-immersed in the world of fashion photoshoots by showing off his professional skills in modelling with various concepts.

I.M, who commanded all eyes on him with his alluring photos, showed off his outstanding ability as a rapper of MONSTA X and an over-all musician and artist since debut.

In addition to making his rap verses in all of the songs from MONSTA X’s domestic albums, he also further established the team’s color by including his self-produced songs in their releases, including “MOHAE”, “U R”, and their Japanese track “CHAMPAGNE”.

Despite being the youngest in the group, he also led various local interviews in overseas activities, contributing greatly to their growing global power. Moreover, the MONSTA X rapper shone in his solo interviews and feature articles on various media outlets and publications such as Forbes, Chicago Tribune, and BBC.

He has also displayed a wide musical spectrum as an “all-rounder artist” with his steady release of solo songs. This includes the well-loved mixtapes “Fly with Me” and the Elhae-featuring track “HORIZON” as well as the single collaboration with Brother Su featuring J. Han titled “Madeleine”.

Meanwhile, the full pictorial and interview featuring MONSTA X’s I.M will be available on the May 2020 issue of MAPS magazine.