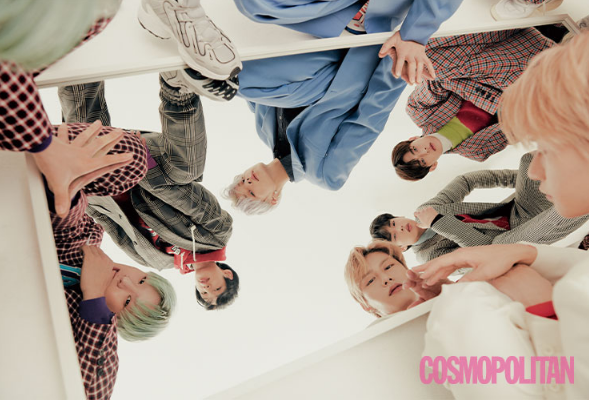 VICTON went all out to share their candid thoughts about their idol journey in a recent magazine interview!

Aside from wowing fans with their stunning group shot, the members likewise showed their respective captivating beauty in their individual photos.

Additionally,  the band gamely participated in an interview with the popular fashion magazine.  In particular, the boys shared their thoughts about their recent comeback and their group’s admirable synergy.

Returning in the music scene with their fifth mini-album Nostalgia that brought the title song “Nostalgic Night” on November 4, the rising K-pop boy band revealed how it helped them grow as idols.

“I would like to say that this new album is a growth for us. There are many developments in music, album composition and choreography,” Chan said.

Aiming to show their sincere passion for music, the members shared that they personally participated in creating their latest tracks. The group also remains hopeful to inspire more people through their songs in the coming year.

With three years since VICTON first made their voices heard in 2016, it is no secret that the group’s journey had been a rollercoaster ride. Even though faced with many challenges in the past years, the boys continue to stay motivated and positive as a group.

Asked on what distinctive quality they are most proud of, Sejun revealed that since debut days, VICTON has always been considering teamwork as their biggest strength.

“We talk openly when there is a problem. Sometimes we fight and match each other, but we overcome hard things together. I think that’s our strength,” Subin, the group’s youngest member added.

Meanwhile, fans can see more photos and detailed interviews of VICTON in the January 2020 issue of Cosmopolitan Korea.

READ: VICTON To Bring Over A “New World” With Upcoming First Solo Concert In Seoul

We need your support! If you have enjoyed our work, consider to support us with a one-time or recurring donation from as low as US$5 to keep our site going! Donate securely below via Stripe, Paypal, Apple Pay or Google Wallet.
FacebookTwitter
SubscribeGoogleWhatsappPinterestDiggRedditStumbleuponVkWeiboPocketTumblrMailMeneameOdnoklassniki
Related ItemsVICTONVICTON Cosmopolitan Korea January 2020빅톤
← Previous Story KCCA Names Top K-Pop Artists And Songs In America According To Survey
Next Story → Four DAY6 Members Launch Official Personal Instagram Accounts In Time For New Year