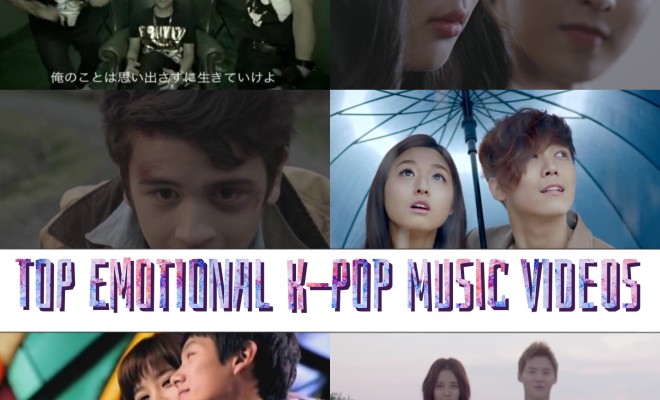 10 K-Pop Music Videos That Will Make You Cry

Although K-pop is known for its mind blowing dance moves, the music videos that are released also play a big part in the K-pop industry.

Here are a few emotional music videos that have been released in the K-pop industry the past few years. Warning: You may be brought to tears with a few of them.

BIGBANG’s Haru Haru and its typical drama style music video, had all fans crying when they saw how heart-broken BIGBANG member G-Dragon was.

Not only did his love interest break up with him, he also found out that she was ill. This video definitely helped BIGBANG show off their acting skills as fans were completely swayed with their acting. This music video is definitely one of the their saddest music videos, so prepare your tissue boxes!

The In Heaven music video hit fans with an emotional wave as it included a loving and sad storyline that went very well with the song that was composed to show everyone the feeling of regret. We definitely learned our lesson!

The past few music videos have involved the concept of someone dying…but this music video can’t be left out. It’s the last one before you can all put your tissue boxes away.

This emotional story line had all fans fangirling over the cute pairing of Park Bom and Korean actor Han Sun-woo.

The music video is a total must because as much as it is funny, the storyline definitely pulled some heartstrings. The love line between SISTAR’s Dasom and Korean actor Ahn Jae-hyun is beyond cute. As we all thought Korean actor/singer Seo In-guk was going to end up with Dasom at the end, the unexpected ending which broke the norm from usual music videos, was definitely worth it!

Let us all have a break from all the heartbreaking love lines and watch another music video that will break our hearts in a different way.

This music video is very meaningful and makes you think very hard of how cold the world can be. The poor boy went through so much heartbreak and just as he was about to give up, a stranger helped brighten up his world again.

The Melted music video definitely tops the list and should probably be watched all over the world, with the message it brings. The song and music video both complement each other well, and definitely deserves more views than it already has on YouTube. So get watching!

Okay, so we said there were going to be no more music videos that included someone dying…well, we lied.

FTISLAND member Honggi starred with AOA‘s Seolhyun in this beautiful music video that definitely brought tears to every fans’ eyes. The story started off with Honggi showing his exceptional acting by crying at the loss of his loved one.

He then gets another chance with her by going back in time. The surprise at the end definitely broke hearts. We all want second chances, watch to find out Honggi’s second chance.

Pretty sure everyone expected this! This would not be a list of emotional music videos, if this one wasn’t included.

Just as amazing as the song, the music video definitely did not disappoint fans. The music video features a storyline about a third-wheel and a sad triangle love.

Please do prepare tissues for this music video. We definitely needed one or two.

By now, i hope you all know that there is no emotional music video without the concept of death as this beautiful music video without a doubt hit fans right in the feels. EXO‘s Xiumin starred in this music video with Korean actress Kim Yoo-jung as they portray a heartbreaking story. The two make a lovely couple as they learn to play the piano together and get to know each other. The end as always definitely hurt fans the most. You’ll regret having not watched this music video.

The beginning of the Because I’m a Girl music video is confusing and a little slow, but that seems to have been the trick of the writer who wrote this story as all the emotions hit you right at the end. It’s also quite a big blow, I hope you all survive this music video. Tell us how you felt in the comments below!

This story comes in two parts. This music video as we like to see it, is more about a beautiful bromance than a love line couple. Though it does have its cliché, fans definitely have highly praised these two music videos for its sad and touching story.

We are now at the end of a very touching, emotional and tear-jerking list. What did you fans think? Are we missing any music videos?

Comment below on music videos you think are the most touching and emotional!

625
SHARES
FacebookTwitter
SubscribeGoogleWhatsappPinterestDiggRedditStumbleuponVkWeiboPocketTumblrMailMeneameOdnoklassniki
Related ItemsAkdong MusicianBigbangFTISLANDHuh GakjinJYJKISSkwilllistmusic videoPark BomquizTaeyang
← Previous Story Poll: Which on-going ‘We Got Married’ couple is your favorite?
Next Story → This Cover Of ‘Eyes, Nose, Lips’ Will Blow Your Mind