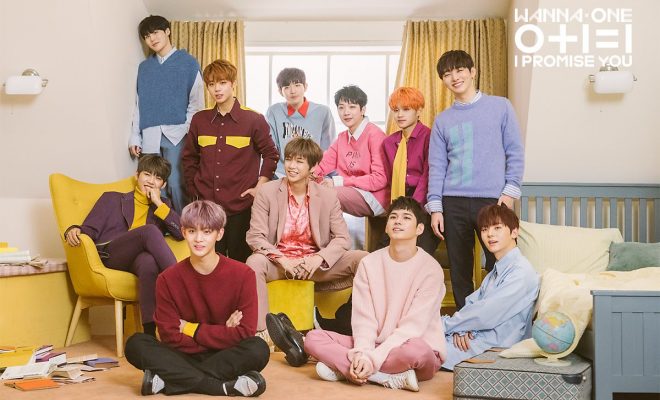 11 Wanna One Moments To Prep Us For “ONE: THE WORLD” Tour

Phenomenal boy group Wanna One is set to meet the world!

Almost a year since the boy group was officially conceived through Mnet’s survival variety show Produce 101 Season 2, Wanna One can look back with pride on how they worked hard to return the love of their loyal fans.

The best rookie group of 2017 continuously prove they deserve the spotlight which has been a way for them to pay gratitude to their faithfuls and to live their personal dreams.

Today, let’s take a quick trip down to Wanna One’s memory lane and marvel on how they have evolved from dreamers to grateful K-Pop artists. 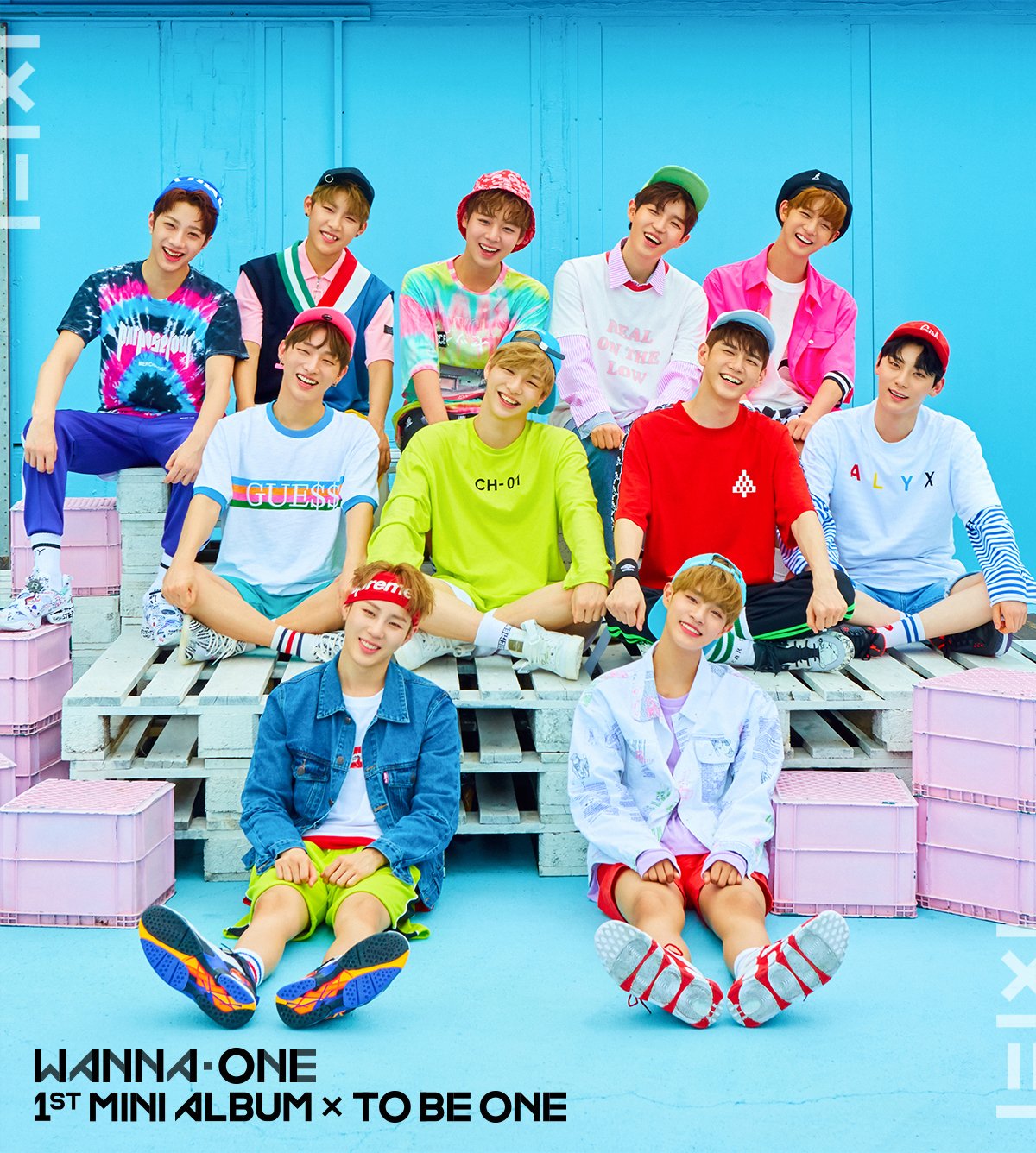 Wanna One is synonymous to the project idol group that rediscovered the extent of their talents individually.

Since then, Wanna One has been taking the Korean entertainment scene by storm after its official debut in 7 August 2017.

The successful Wanna One Premiere Show Con held at Gocheok Skydome is the first for an idol group debut concert stage, solidifying the immense fame that the 11 talented members have secured as the ultimate survivors of Mnet’s Produce 101 Season 2. 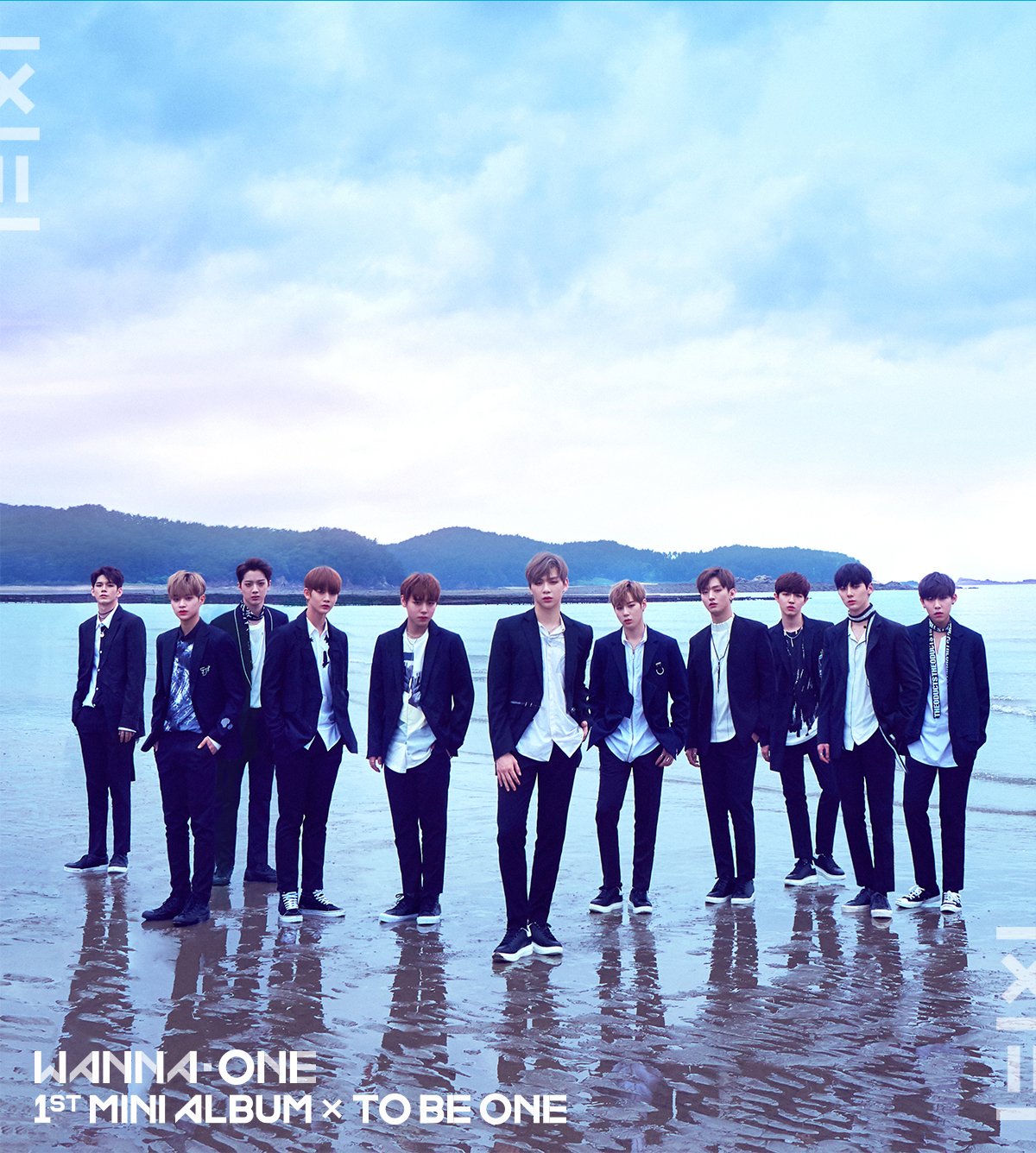 After the successful concert, Wanna One released its first single “Energetic”, which became the first single of a newbie idol group to reach more than four million views in 24 hours.

Three days after the boys’ concert, they lighted up M! Countdown stage with their second single “Burn it Up”.

There is no stopping of Wanna One, who is intent to keep its Wannables happy, as a way of thanking them for the showers of support.

The group’s TV show, Wanna One Go, premiered on August 3, 2017 and narrated the life of the members as they live together in their dorm while preparing for a big concert stage they will conquer.

The second installment, Zero Base, allowed viewers to see the boys and their different personalities as they engage to create happy memories.

X-CON, the third season showed the group in subunits in preparation for their upcoming world tour.

From product endorsements to string of variety show guestings, Wanna One became the most sought after brand ambassadors.

Their busy schedules did not stop them from delighting their fans on their adorable TV entertainment show visits.

They have paraded in almost all popular entertainment shows such as Happy Together, Knowing Brothers, The Return Of Superman, Weekly Idol, Running Man and more. 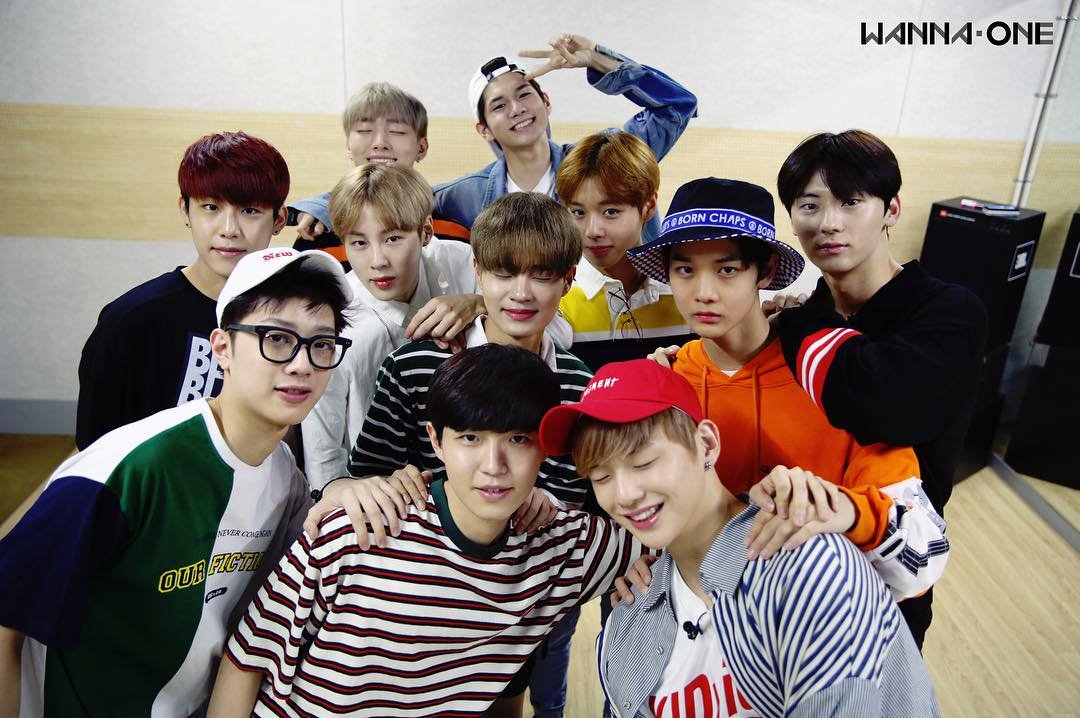 Following the tradition of flower-boy uncles baby-sitting Lee Dong Guk’s children when he has important business to attend to, Wanna One members Kang Daniel, Yoon Ji Sung and Park Ji Hoon were summoned to stay with the kids in the popular weekend variety show The Return of Superman.

The young uncles had a blast of happy memories with Seol-Su-Dae.

Park Ji Hoon’s unearthly handsome face made Seol Ah think that he is an alien, and his team members cracked up on it.

The pretty-boy uncles took a higher notch on playing a virtual game with the Lee siblings in a way that made all the girls watching it want to be cradled the same way.  *wink

Bromance was inevitable for the members since their survival show journey can be equated to a shared military training hardship.

That being said, the ups and downs that led them as the top finishers of the program solidified their bond as a group.

Hence, couples are born every now and then. They share the good times and the bad times.

By bad, we mean this cute OngNiel video who turned them to cute little boys when pesky bugs joined them on their cozy outdoor date.

Sometimes, it is like a scene in a drama with Guan Lin playing it cool to win a yummy lunch for Ji Hoon hyung on their first mission in Wanna One Go.

Hwang Min Hyun narrated how he discovered and teamed up the three skilled members of Wanna One first, in their “Sorry Sorry” showcase in Produce 101 Season 2.

When the host of Weekly Idol confirmed it with Daniel, he smiled and agreed.

Seong Wu quipped that he is nothing prior to meeting Min Hyun, making the hosts and the members laugh in unison.

7. The Main Everything Of Wanna One

Jae Hwan creatively introduced himself as main vocal, rapper, dancer, visual, fashionista, and main everything of Wanna One so his friends snapped him out of his delusion by affirming that he is the main fabricator of the team.

When Min Hyun was being teased for his entertainment-CEO eyes, the hosts asked Jae Hwan’s opinion, and if he has a religion.

He cleverly rode on the humor thread stating that Hwang Min Hyun is his religion.

There’s something in Kang Daniel’s laughter that made him popular with girls.

He is quick to smile and chuckles at almost anything hilarious.

Even on his stint in It’s Dangerous Beyond The Blankets, he is often captured mumbling things in his own world.

His fellow Wanna One brothers are baffled on his ability to laugh even on the things that happened previously which don’t seem to be funny at all. 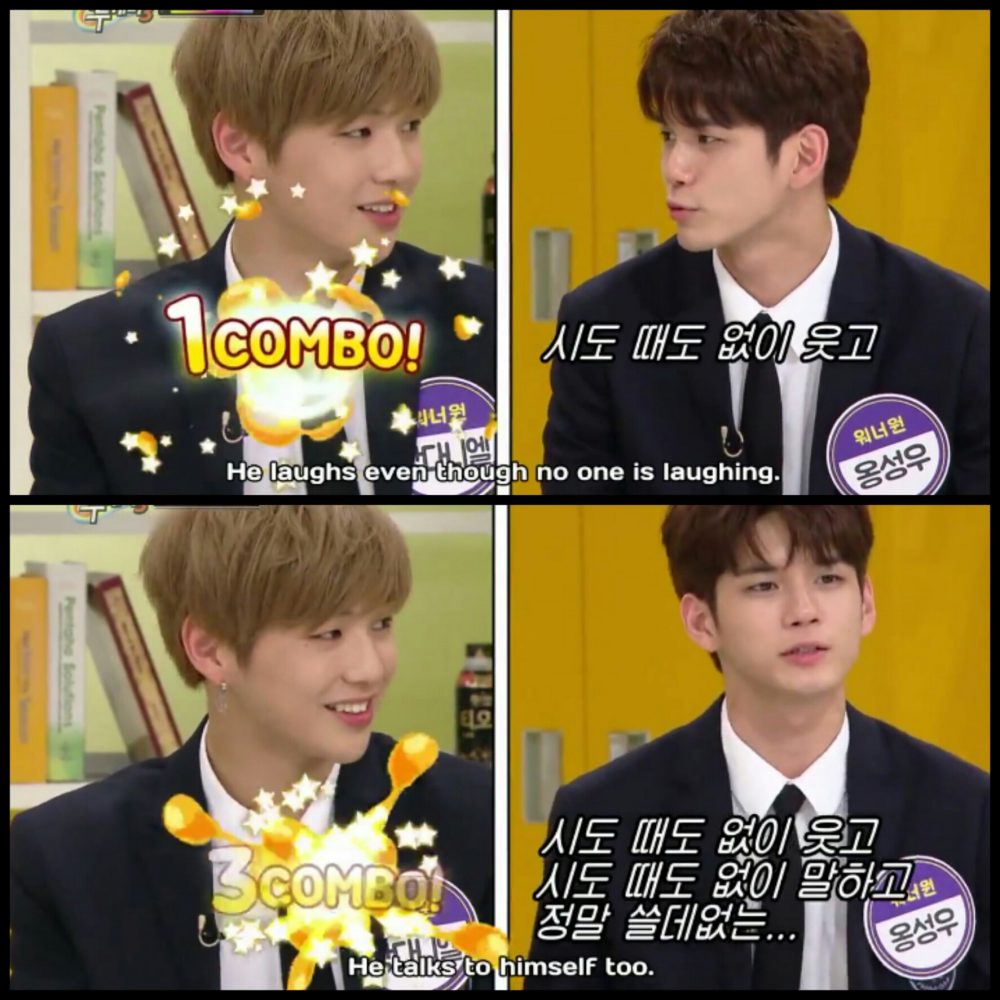 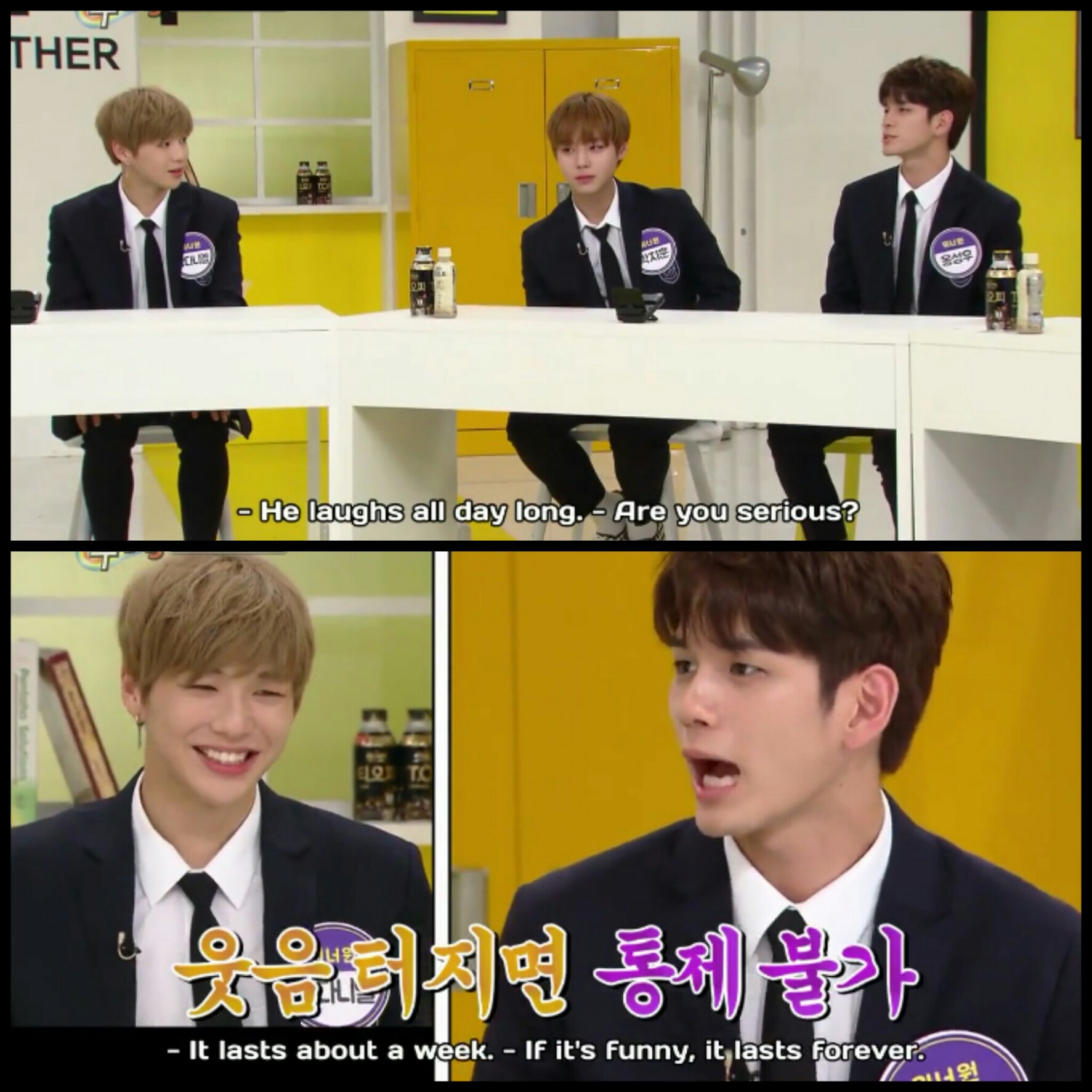 The boys were asked for their hidden talents, and assigned task to the group in their Weekly Idol guesting.

Ha Sung Woon and Ong Seong Wu boasted weird sounds they can make which are totally awkward and cute.

Guan Lin projected his gaze. Woo Jin showed his cutely misplaced tooth. When it was Sung Woon’s turn, he claimed he can make a unique echo sound but the hosts can’t hear it well. So they had him sit on Defconn’s lap while performing his weird talent.

Following the sound production skills, funny Seong Wu mentioned he can imitate a sound of a traditional Korean instrument. The members listened to him intently but they laugh in unison on his exaggerated rendition.

When the group visited jTBC’s Knowing Brothers, Ji Hoon who used to be a dramatic child actor was challenged to shed tears opposite Lee Sang Min.

To set the mood, a background music was played which made the Wanna One members burst in laughter because it was Seong Wu’s trademark music.

Wanna One has been on a sweet and successful spree to complete their promotion as a group.

You can feel their emotions as musicians who would take the extra mile to make their fans and audience happy.

Their second album, I Promise You, receives commendable success. With upcoming third album, Undivided, they gear up to aspire for another milestone.

From June to September, the boy group will unleash golden time in Wanna One World Tour: <ONE: THE WORLD>, visiting key global destinations including the United States, Australia, Jakarta, Singapore, Bangkok, Taipei and Manila.

The fruit of group hardwork is gratifying for Wanna One who has made the most out of the opportunity given to them.

The sold out albums and fan meetings, as well as, the downpour of advertisement and guesting offers attest to how huge their presence has been in the K-Pop industry.

A feat hard to achieve considering the set time they will be promoting as a group.

They promised to devote a phase of their lives, ever showing they love what they do, when they barely live in their own moments.

All for the love of their fans. 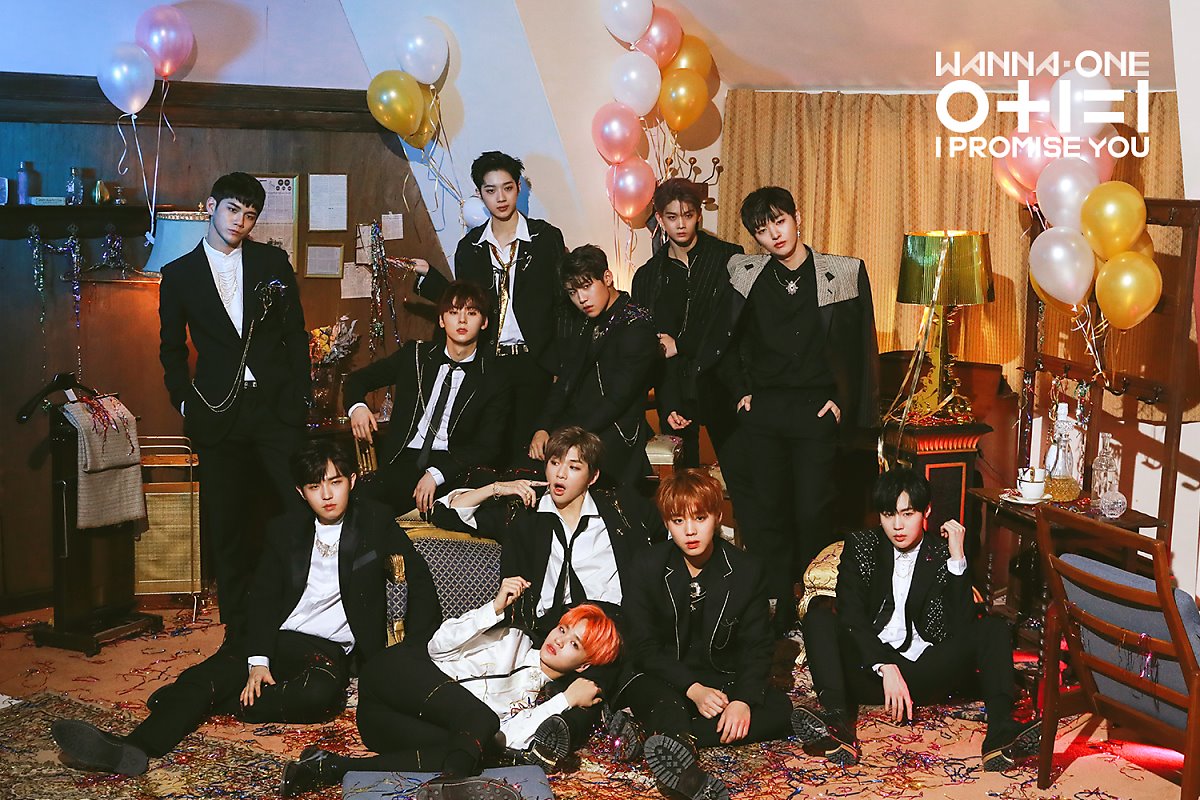 FacebookTwitter
SubscribeGoogleWhatsappPinterestDiggRedditStumbleuponVkWeiboPocketTumblrMailMeneameOdnoklassniki
Related Itemsone the worldwanna onewanna one goWanna One in ManilaWanna one undividedWannaOneinJKT
← Previous Story #LE9ENDARY2NE1: 21 Tweets To Celebrate Nine Legendary Years Of 2NE1
Next Story → 7 “Something In The Rain” Moments That Made Us Want To Buy Jung Hae In More Food