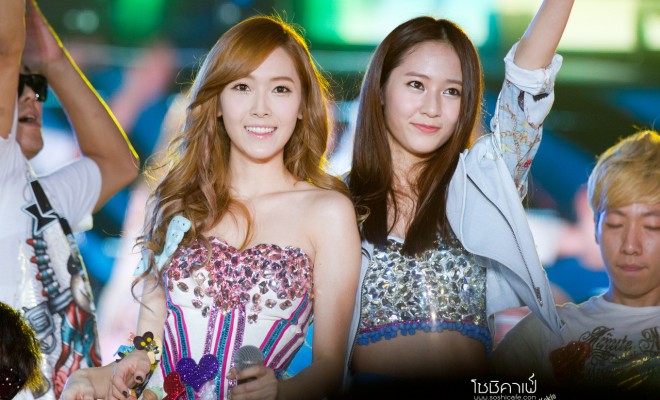 It’s quite common to see a few siblings in the Korean entertainment industry. In the K-pop world where competition is fierce, you’d be surprised at the number of familial ties within it. Often times, we see these siblings in different agencies and groups but there are also special cases in which they are placed in one unit.

Let’s take a look at five of the music industry’s famous siblings:

The charming twins of the girl group Crayon Pop. Well, the resemblance is uncanny obviously, they are twins after all. No matter how many times these two bicker in front of the camera, in the end it still shows how both of them care so much and look out for each other.

Before their debut, Way was originally from an indie band called N. Dolphin. She recommended her twin sister to join the group since she was still promoting her band’s album. A series of events happened then after, which allowed her to leave her band and join her sister in Crayon Pop.

Let’s play a game: Which is which? GIF: Tumblr

Another set of idol twins! Could their parents be any prouder? If you are an avid fan of Boyfriend, you can instantly tell which is which (without help from the hairstyles). Kwangmin is older by six minutes, making him the “hyung”. Youngmin is the friendly, easy-going one while Kwangmin is the more serious type. Both twins were trainees of JYP for two years and have made several commercials before signing with Starship Entertainment.

Siblings Chan Hyuk and Soo Hyun are collectively known as Akdong Musician or AKMU. Before being famous as AKMU, they’ve had their share of hardships. They had to quit school since their parents couldn’t afford it anymore. Then they had to relocate to Mongolia for two years due to their parent’s missionary work. All those experiences made their sibling bond stronger.

After returning to Korea, they got serious in pursuing a career in music. They were hailed as winners of the second installment of K-pop Star. Their innocent, catchy songs and harmonic voices make them a great sibling duo.

Making music with your brother is the best! GIF: Tumblr

The Jung sisters are known both in their groups and separately. They always stand out due to their charms and beauty which make them perfect visuals. There is no denying that good genes run in this family. Both can model, dance and sing, even hitting the high notes in their songs. Jessica still retains her idol image even after leaving Girls’ Generation for another career. Krystal is still with f(x) and continues her idol career in K-pop. Even with all the rumors surrounding them, their sisterly love still goes strong.

The dynamic Park siblings are always lively and fun when together. Dara is very supportive of her brother, Thunder/ CheonDoong (now, ex-member of MBLAQ) and we can say the same about Thunder when in regards to her noona. The 2NE1 girls jokingly name Dara as “CheonDoong Stalker”, since she’s almost always present whenever her brother is promoting. These two have a very tight sibling relationship. Both always go out of their way and give an extra effort when it comes to supporting each other. They are both hard working individuals that share the same passion and drive to get to their dreams.

These are just five siblings and there are a lot more siblings in K-pop! Name K-pop siblings which are not on the list and which siblings are your favorite?

Hellokpop, as an independent Korean entertainment news website (without influence from any agency or corporation), we need your support! If you have enjoyed our work, consider to support us with a one-time or recurring donation from as low as US$5 to keep our site going! Donate securely below via Stripe, Paypal, Apple Pay or Google Wallet.
324
SHARES
FacebookTwitter
SubscribeGoogleWhatsappPinterestDiggRedditStumbleuponVkWeiboPocketTumblrMailMeneameOdnoklassniki
Related Items2NE1AKMUBoyfriendcrayon popf(x)girls generationlistMBLAQquiz
← Previous Story 5 K-Pop Tips For One Direction Fans Dealing With Zayn’s Departure
Next Story → 10 Basic K-pop Terminology Every Fan Should Know