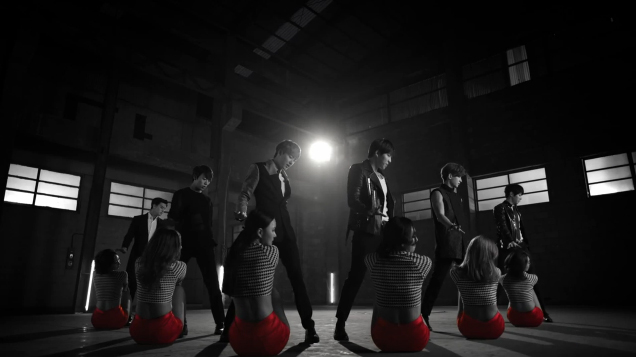 With so many groups coming and going each year, it is easy to let groups with potential slip by.

Royal Pirates is a three-member rock band under Apple of the Eye Co. Previously known as Fading from Dawn as a four-member band in 2004, the group was more active in California until the unfortunate death of a band member Richard Kim. In 2008, he was involved in a car accident in Pomona, California.

The current members consist of drummer Kim Soo Yoon, bass guitarist James Lee, and guitarist/vocalist Kim Moon Chul (Richard’s younger brother). Prior to their official debut, they were quite popular on YouTube for their rock versions of cover songs such as Nobody by Wonder Girls, Mirotic by DBSK, Sorry Sorry by Super Junior and many more. On March 7, 2010, they released Disappear with a music video for their fans. Royal Pirates made its official debut on August 25, 2013 with Shout Out. Then in 2014, the members returned with the well-loved Drawing the Line title track.

The name for the band itself is contradictory. “Royal” and “Pirate” contrast each other. The company released on its official website that:

“Royal Pirates is following the royal lineage of rock bands and racing towards becoming a legendary rock band in our time. And on this voyage, Royal Pirates, not trapped by any frame of mind, can freely make music that transcends time and space.”

Royal Pirates’ style of music is unlike that of CNBLUE and FT Island.  This gives them an advantage to shine. I had never heard of Royal Pirates until they returned with Drawing the Line. Honestly, I thought it was a decent song but I wasn’t impressed by it. What blew me away was the rest of the songs off of the album. My favorites are Drawing The Line (English version), On My Mind, and See What I See.

I came across SPEED through T-ARA, its label mate. I was intrigued by It’s Over, both by the song and the music video. I did not pay much attention to them until 2014, when they returned with Look At Me Now. I loved the unique sound they produce. Some of my favorites include One Day, Why I’m Not, and Pain The Love Of Heart.

Phantom is a hip-pop trio under Brand New Music. The members are leader Kiggen, vocalist Sanchez, and maknae Hanhae. They debuted in 2011 with Burning. Other title tracks they have released are Hole in Your Face, Like Cho Yong Pil, New Era (featuring Navi), and Seoul Lonely (featuring Gain of Brown Eyed Girls). Vocalist Sanchez featured in Verbal Jint‘s You Deserve Better.

The story behind Like Cho Yong Pil is quite bitter-sweet. The title is named after legendary singer, Cho Yong Pil. The song signals dream and hope. The music video follows through the hardships the Phantom members face throughout their music career.

Phantom is one of my all time favorite groups. Every single track they come out with has impressed me. I found out about them through Hole in Your Face. It only took Sanchez’s one line to get me hooked. I still remember being enchanted by them when I first heard the song. As always, their newest track, Seoul Lonely, lived up to my expectation. My favorites are I Already Know, Come As You Are, Burning, Hole in Your Face, Seoul Lonely,  and You Deserve Better.

History is a five-member group under LOEN Tree. The group consists of leader Kyungil, main vocalist Dokyun, lead rapper Jaeho, rapper Sihyoung, and maknae Yijeong. They debuted on April 26, 2013 with Dreamer, with IU as the narrator. Following the members’ debut, they released Tell Me Love and What Am I To You.

History is the first boy group from LOEN Entertainment. The members impressed the public with their perfect harmony with Dreamer. They specialize in both K-pop and Latin Pop and their fandom name is Storias, which means story in Italian. Yijeong and IU did a special collaboration called Friday and received all-kills on charts instantly.

I absolutely adored this group ever since its debut with Dreamer. The members’ perfect harmony instantly grabbed my attention. Like many others, I watched the music video for IU but stayed for History. My favorite track from them would have to be Tell Me Love for its funky yet addictive beat in the background. Their newest comeback with What Am I To You was very different from their previous comebacks and I hope that they will find their own style soon. I think that their harmony in Dreamer would be able to set them apart from other groups. My favorites are Hello, D-Day, and The Last Time.

ToppDogg is a group overfilled with talents. Honestly speaking, my first impression of them was not very pleasant. Their debut song Say It/Follow Me did not impress me at all due to the heavy use of auto tune. I quickly disregarded them until they returned with Kidoh Cigarette. I was shocked by how well they sang and became a fan soon after. I was most impressed by Kidoh, who awed the fans (including me) with his self produced track, From A Trainee To An Artist. My favorites from ToppDogg are Cigarette and I Know.

U-KISS is a seven-member group under NH Media. Members include leader Soohyun, main dancer Kiseop, main rapper Eli, main vocalist Kevin, lead vocalist Hoon, rapper AJ (currently inactive), and maknae Jun. The group debuted in 2008 with Not Young. The members had their big breakout with Man Man Ha Ni in 2009. Other title tracks that most fans are familiar with are Shut Up, 0330, Neverland, DORADORA, Believe, Stop Girl, Standing Still, She’s Mine, and Don’t Flirt.

U-KISS is more popular in Japan. Previous members consist of Dongho, Xander, and Kibum. New member Jun was added to U-KISS for the promotion with Don’t Flirt. uBEAT is the first sub-unit from U-KISS and is comprised of Eli and AJ with a featuring from Kevin. They released their title track Should Have Treated You Better in 2013.

I wasn’t planning to include U-KISS because they are quite popular internationally, just not in Korea. However, they are definitely the most underrated group out of all. I am personally a big fan of their music. They have a distinct sound that easily sets them apart from other groups. My favorite tracks are Bad Person, She’s Mine, Can’t Live Without You, Mysterious Lady, and Stop Girl (English Version).

What are your thoughts on the 11 boy groups mentioned in both part 1 and part 2? Who do you think is the most underrated out of all? Are there any other groups that you think should have made the list?