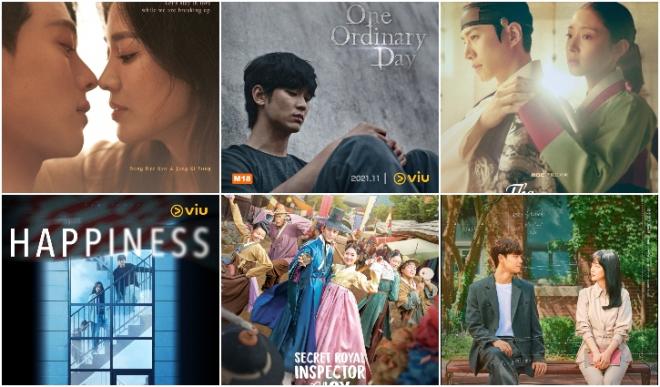 6 Korean Dramas To Watch On Viu This November

A mixture of romance and thrilling stories abound K-Dramas on Viu this month!

Now We Are Breaking Up

Song Hye Kyo’s character is a beautiful and trendy lead for the design department of a fashion company. She’s also a realist who prioritizes her own stability above all else.
However, when she meets Yoon Jae Gook (Jang Ki Yong), a rich freelancer photographer, they unwittingly start to change each other’s minds.

Based on the novel of the same name, The Red Sleeve is a royal court romance love story between a young prince and a court lady. After the brutal death of his feather, young prince Yi San (Lee Jun Ho) is next in line to take the throne, once his cruel and ruthless
grandfather dies.

He meets Seong Deok Im (Lee Se Young) in court
and falls in love with her. He tries to convince her to be his official concubine, but the strong-willed and free-spirited Deok Im refuses, knowing that the role would restrict her freedom.

One Ordinary Day is a remake of the award-winning British television drama series Criminal Justice. It features K-drama star Kim Soo Hyun as Kim Hyun Soo, an ordinary university student whose life turns upside down when he unexpectedly becomes the key suspect of a murder case.

His only hope is Shin Joong Han (Cha Seung Won), a
third-rate lawyer who barely manages to pass the bar exam. Against all odds, the pair must put up an intense fight in order to free Hyun Soo and bring the real murderer to justice.

Set in the near future, Happiness is an apocalyptic thriller that takes place in a time during which infectious diseases have become the new normal.

In a big city, a new high-rise apartment building is constructed, where the higher floors are up for rich residents and the lower floors are rented out. A new deadly virus spreads within the city and the building is sealed off. The residents struggle to survive, while stricken with fear and distrust of others.

Set in the Joseon period, this romantic comedy is about a young man, Ra Yi Eon (Taecyeon), whose dream is to run a small dumpling restaurant and lead an easy life.

However, he passes the state examination and becomes a secret royal inspector, an undercover official who inspects local provinces to expose corruption.

Despite this, he doesn’t work hard, leading an easy-going life. However, all these changes when he meets Kim Jo Yi (Kim Hye Yoon), a progressive-minded young woman who is attempting to divorce her husband, a gambling addict. They work together to solve cases, discover truths and uncover corruption in society.

Ji Yoon Soo (Lim Soo Jung) is a mathematics teacher at a prestigious private high school. There, she meets Baek Seung Yoo (Lee Do Hyun), a problematic student who is at the bottom of the class.

She notices his potential in mathematics, and with her care and interaction, Seung Yoo tops the class. However, her attention and interactions with Seung Yoo create rumors of a teacher-student relationship, which results in her being fired from her job.

Four years later, Yoon Soo and Seung Yoo meet again, now as adults, to reveal the corruption in school, and for Yoon Soo to regain her reputation as a teacher.

Don’t miss these exciting new K-Dramas on Viu this November!