Review: f(x)’s Red Light is their weakest album since debut 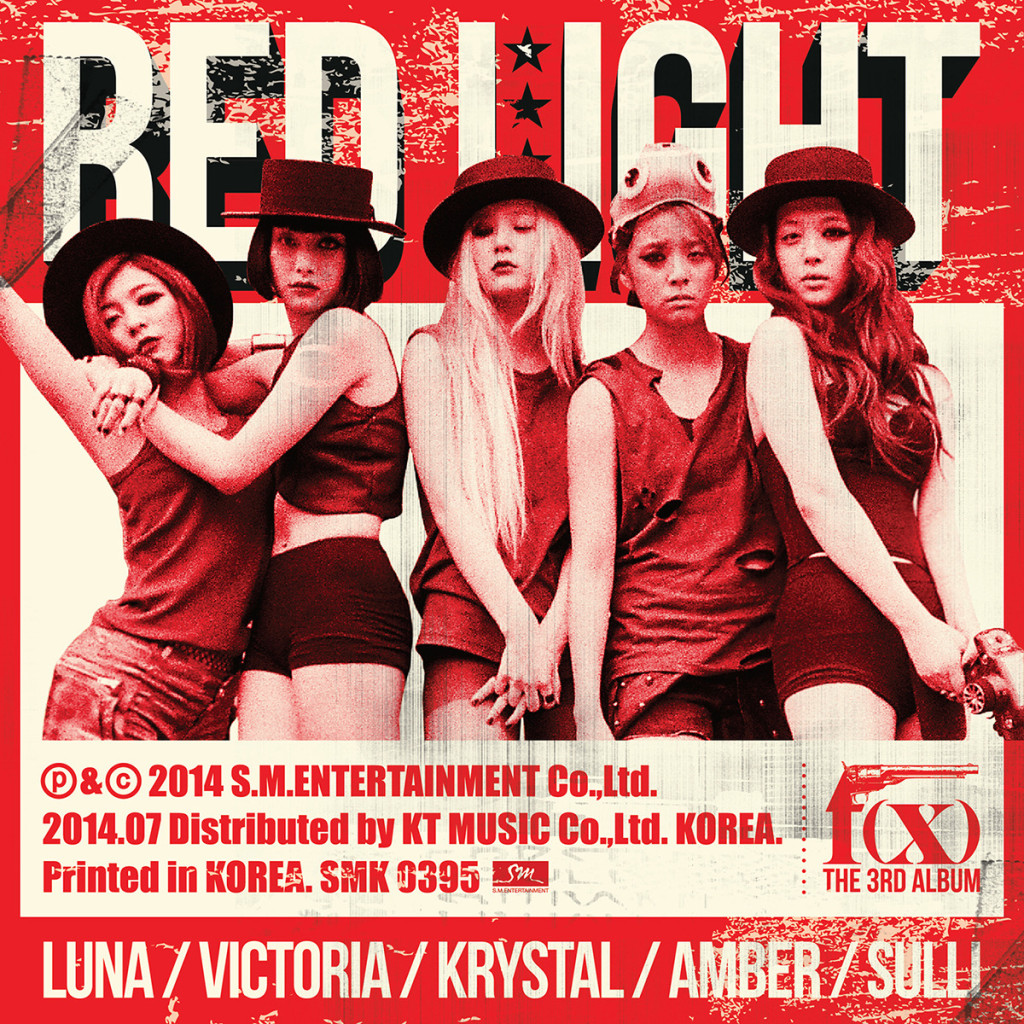 SM Entertainment‘s (shortened) marketing for Red Light seemed to be a rehash of Pink Tape (2013)’s promotion. There wasn’t a full art-film teaser this time, but the teaser-lite did hint at mystery and intrigue, maybe a little taste of horror for the summer. The album itself lives up to the billing about as much as Pink Tape (which went on to become our Dance/Electronic Album of the Year 2013) lived up to its teaser – that is to say, not much at all. I suppose whether you were disappointed or not depends on how cynical you are about these things.

In reviewing f(x) three times in this space over the last three years (here, here and here), I’ve covered and retreaded the narrative of this group a few times. In Red Light, f(x) and SM mostly retread old ground themselves, starting with the teaser. f(x) is the most consistently critically well-received idol group in the country, so getting more of what made that possible is surely not the worst thing that could happen. But the few things they do try anew don’t help the album very much, either.

So what’s back? The top-notch sound polish, of course. The sounds of Red Light are fun, bold, intricate, and distinct. The last part is the most impressive: in an album awash with synths and pads, Kenzie, Thomas Troelsen and company again succeed in crafting instantly identifiable sound. Lead single “Red Light” features trap bass and diced synths, as if to translate strobe lights into sound. “나비 (Butterfly)” juxtaposes harsh and heavy textures with warm ambience and diffusion, making f(x)’s first foray into dream pop a memorable one. “All Night” takes the place of previous albums’ retro jams (“아이 – Love” and “Signal”, respectively) and adds a touch of funky soul through an eclectic, high-fidelity mix of string and electronic palettes. (Very much courtesy of Jinbo, who is listed as a producer.) The halfhearted attempts at new styles (“무지개 (Rainbow)”‘s hip-hop, “Dracula”‘s theatrics) leave the album saddled, but the audio is still mostly spectacular.

The vocal direction, meanwhile, is a departure from the past. Red Light increases the role of harmony compared to previous f(x) work: for example, the bridge and chorus of “Red Light” are noticeably more layered than before – compare to the individual focus of “Pinocchio” or the round mechanics of “Rum Pum Pum Pum”. (The round structure itself, by the way, survives here through “Milk”.) Rich harmonics are also prominently featured in “바캉스 (Vacance)”, “Dracula”, and “종이 심장 (Paper Heart)”. For a group that made its name on maximizing each member’s individual vocal niche (sometimes even in chorus sections), this is an unexpected development.

Additionally, the album shifts Luna and Krystal to a more prominent lead-vocal role (the former more so than the latter), increases Amber‘s involvement in the melody game, and reduces the moments when Sulli and Victoria used to shine the most – the speedy, conversational riffs and rhythmic delivery. Luna and Amber thrive, but the last part is problematic. Part of the reason, I think, is that both Sulli and Victoria are now capable of handling more technically demanding parts than before. But as I’ve written about, f(x)’s sub-vocals do much more than just provide backdrop for the leads; their unique styles make a lot of the group’s quirky and atmospheric stuff possible. (A song like this album’s “Boom Bang Boom” is really best fit for their styles.) So the net effect is dubious.

That brings us to the themes and lyrics of Red Light. The lead single is somewhat of a throwback to the old-school Yoo Young-jin SMP days – when SM boy bands spanning the years from H.O.T. to TVXQ would spend every other track releasing teen angst and superficial social commentary and BoA would sometimes participate. That’s an unfair comparison, but coming from f(x), this sort of charged message does jar you. Kenzie’s lyrics themselves are standard fare, demanding change from the culture of competition and strife. It seems more style than substance, frankly. The song does define a new “serious” spectrum for f(x), both sonically and thematically. Unfortunately, with mediocre “Dracula” as its sole companion, “Red Light”‘s atmosphere holds little sway over the rest of the album.

Red Light is best when it’s about the same thing that f(x) has always been about: creative voicing of high-teen and twenty-something sensibilities and emotions. It’s not quite as zany as the seminal Electric Shock (2012), being much closer to Pink Tape in content. Lyricist Misfit (sort of taking the role of Jeon Gandhi from the last album) slyly mixes onomatopoeia and confrontational attitude into “뱉어내 (Spit It Out)”. The album’s most entertaining song, “Boom Bang Boom”, is powered by unorthodox structure and a second-person metaphor of a ring fight to represent a budding relationship, while its best lyrics (in fact, perhaps f(x)’s best in years – no small feat) come from the tender confessions of “Paper Heart”. Seo Ji-eum, a frequent SM and f(x) collaborator, puts on a clinic with that song’s balance of identifiable emotions with pretty language.

As good as these are, it’s unfortunate that the new attempts in this album are not very convincing. SM moved on from the security of Pink Tape, which is commendable, but went in a direction that weakened the group’s former strengths. I do see a lot of potential in the atmosphere of “Milk” and risk-taking of “Butterfly”, and if harnessed well I think tracks like this will be what f(x) can build a long discography upon. For the moment, Red Light is the group’s weakest album since its debut EP. (Though ‘weak’ for this group is ‘pretty darn good’ for a lot of people.) We can hope that these are just growing pains, as F(x) start to explore the intermediate years of their career.