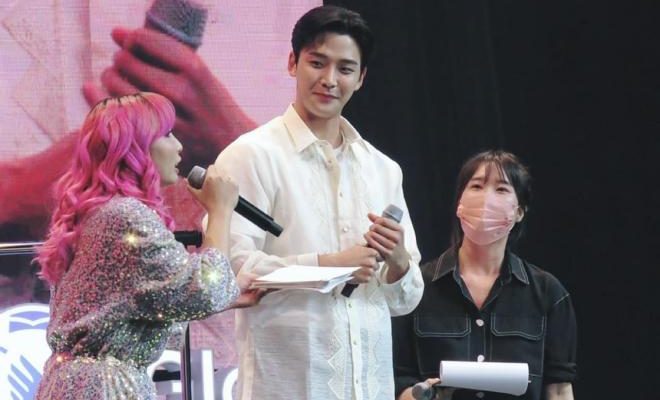 All The Extraordinary Moments Shared At “RO WOON Live In Manila”

Globe KmmunityPH brought fans an amazing chance to meet the singer-actor in a one-night event RO WOON Live in Manila.

In case you missed the event, we got you covered with the best moments shared together by Rowoon and the mammoth crowd who enjoyed his adorable sides and make-sense insights.

The King of Pinoy Tongue Twisters and Food

Elated in meeting a huge crowd, Rowoon made sure to style his greeting in Pinoy flavor.

Once settled, host Kring Kim strikes while the moment is hot by introducing a quick warm-up exercise for the actor.

While RO WOON Live in Manila is his third visit to the country, he shared that he was not able to explore Filipino dishes.

Lucky for him, the event especially prepared a segment for him to frolic in traditional Pinoy food.

He gets a quick Filipino Food 101 lesson and gets a quick taste of “turon with langka” which he likes and claims is perfect after exercise.

He also munches “puto bumbong” which he described cheesy, but host Kring Kim joked that he put a lot of it which made him laugh.

Initially, he was also curious about “taho” – when he got a taste of it, he exclaims wanting to bring it home to Korea, just as the audience wishes to take him home.

"I think I have to bring "taho" to Korea." #ROWOON enjoyed a quick munch of different Filipino food.

Kim Rowoon has the stature and visuals tailored for a K-Drama male lead. It is no surprise that he is also a contender for brand endorsement.

Before the event, selected media people were given a quick meet-and-greet with him. His charming and commanding presence is evident as he happily welcomed us with a smile.

Looking like the first date every girl wishes to have, he donned a neat ensemble. Then, he was asked to wear a Barong Tagalog, a long-sleeved formal shirt for Filipino men.

Right that moment, on stage, he obliged. He comments that the feel of the clothing complements the humid weather in the Philippines. Noticing the see-through texture of Barong Tagalog, he smartly quipped that it’s tricky to wear.

Raising the excited cheers of the crowd, he obliged for a quick runway walk looking like the perfect groom for all the females present at the fan meet.

What better way to follow up Rowoon’s manly parade of splendor than to showcase his athleticism?

Challenging “sipa” (Jegichagi in Korean) he tried, he really tried – but it’s the sipa’s fault for evading his kick. Nonetheless, the viewers were gifted with his cute clumsy side.

Genuinely enjoying the prepared segments, Rowoon plays Charades. It is another popular Filipino game but is typically dubbed “Pinoy Henyo”.

From food to places, he was able to score high and avoid penalties because of the fans vocally coaching him. While he feigns not to hear the right answers, he rides on his fans’ coaching pretending he’s eager to get the items to be guessed right.

#ROWOON is playing "Pinoy Henyo". We just discovered how logical and analytical he thinks. And he also knows how to cooperate with his fans coaching him to play. 😁#RowoonLiveinManila#GlobeRoWoon #GlobeKmmunity pic.twitter.com/8cA02kWKsA

Suiting up as an impromptu life guru, Rowoon also delivered insightful pieces of advice to his fans. When asked about how he copes with stress, he gave a realistic answer that makes sense.

“I deal with stress by accepting it. Because if you want to release it, the stress does not go right away. So, I just fight with the stress.”

He gives another meaningful thought to his fan’s concern about giving up on dreams.

“I think failure is more meaningful than success. It drives you to achieve more. Those failures would matter eventually. Because when we look back after all those failures, we can feel proud of what we’ve become.”

In speaking about challenging new experiences, he relays it is important to own up to choices. He remarks how inevitably we are the owners of those decisions and just have to be brave about it.

"I think failure is more meaningful than success. Because when we look back after all those failures, we can feel proud of what we've become." – #ROWOON #RowoonLiveinManila#GlobeRoWoon #GlobeKmmunity pic.twitter.com/AuHiOwK6Ya

Here are some random trivia disclosed by him at the fan meeting.

After over two hours of proving his affection to his fans, Rowoon bids goodbye with warm words of encouragement and appreciation. Expressing the support powers him to do well with his craft, he asks his fans not to forget him.

“Thank you from the bottom of my heart. I have future projects soon. Please support and wait a little more.”

Sealing the unforgettable night with his Filipino fans, Rowoon sweetly serenades everyone with a song gift.

That's a wrap here at #RowoonLiveinManila! We are all going home with a sweet memory of a sweet serenade from #ROWOON! 🥰

Thank you @KmmunityPH for the media invite to the event! 😊

abbyinhallyuland thanks Kmmunity PH for the media invite to the event. This fan meeting recap is also published on KDRAMADIARY.