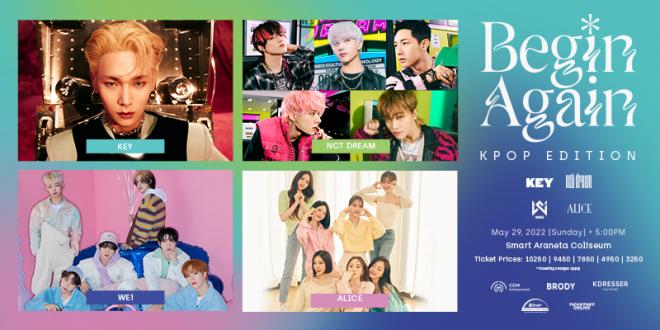 All The Things You Need To Know About “Begin Again: K-POP Edition”

With borders opening and pandemic restrictions slowly easing, the  Philippine concert stage is also finally back. To start off the festivities on a good note, the Begin Again: K-POP Edition live show will feature four of the most sought-after Korean music acts today!

Ask any Filipino K-Pop fan what they miss the most during the pre-pandemic period and they will definitely say watching their favorite Korean idols on stage while screaming their lungs out. Amidst the photocard collecting trend and the tough competition to enter a video call opportunity, there’s no denying that there are still quiet echoes of “I miss watching concerts!” and “When are fan meetings coming back?” in various corners of the web. 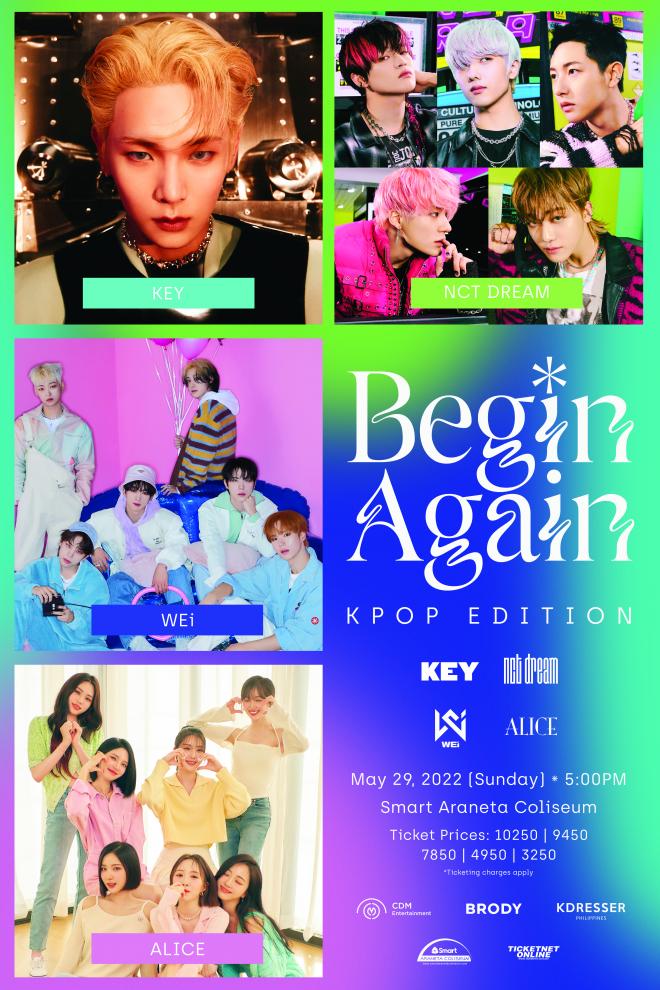 Well, you’ve probably heard the news by now, and yes you are all in for an exciting treat! Four of the most popular K-Pop acts will soon visit Manila for a memorable one-night concert. NCT DREAM, SHINee’s KEY, WEi, and ALICE are set to perform their biggest hits live at Begin Again: KPOP Edition happening on May 29, 2022 at Smart Araneta Coliseum, starting at 5 PM KST.

Presented by CDM Entertainment, the two-hour event marks the first international concert in the country after two years. The artists have come together to meet their beloved fans face to face, after years of purely virtual interactions.

There’s bound to be a lot of excitement and maybe a few happy tears as idols and fans meet again after a long time. The concert will allow fans to freely interact with their idols and connect with them on a deeper level. Most importantly, Begin Again: KPOP Edition will likewise serve as a platform for artists to deliver happiness, comfort, and gratitude to their supporters amidst these trying times.

They're truly worth waiting for 💗 Don't miss this chance to see NCT DREAM, KEY, WEi, & ALICE live at #BeginAgain_KPOP.

Hurry and grab your tickets now while they last! ➡️ https://t.co/UgcMQLkNjz pic.twitter.com/w53iCr5TPf

To add to the thrill, the event checks off a couple of hallmark moments for the artists. For instance, NCT DREAM is coming back to “open the doors” of international live shows after being the last one to hold it in 2020. Meanwhile, it is WEI’s first time visiting the Philippines after their debut in 2020.

Moreover, ALICE, formerly known as ELRIS, gets to meet their Pinoy fans again with more members than the last time they were here. Finally, it will mark KEY’s return to the Philippines after five years. In 2017, he performed at a benefit concert with the rest of the SHINee members, but this time he will appear with an upgraded image as a solo artist. 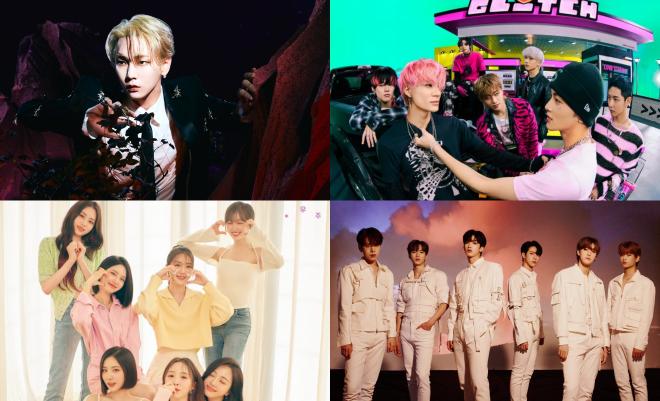 All four acts are fresh off the release of their latest work. NCT DREAM successfully wrapped their “Glitch Mode” era with two million albums sold. Their latest release also marked their first entry on the Billboard 200 Chart, proving their massive popularity and global influence.

NCTzen! Have you seen the news? 😁 JISUNG said he can't wait to be back here!

Join him and NCT DREAM at #BeginAgain_KPOP this May 29 💚

Meanwhile, SHINee’s KEY debuted as a solo artist in 2018 with FACE and has since released multiple albums since his military discharge in October 2020. Bad Love is his latest offering, which came out in September of last year and had six tracks, including the lead single of the same name. It earned KEY his first music show win as a soloist along with a number of critical acclaims including the third spot at NME’s “The 25 best K-pop songs of 2021.”

Despite being only two years old, WEi under Oui Entertainment is a group with so much potential. They recently released their mini-album Love Pt.1: First Love in March and are drawing attention and positive response from K-Pop fans across the world with their incredible visuals, talents, and chemistry. The album gave WEi the fifth spot on Korea’s Gaon Chart.

Maybe it's not too bad because WEi is finally coming to Manila. 🥳 Watch their message for PH RUi below. ▶️#BeginAgain_KPOP pic.twitter.com/cjPOV88r1h

Finally, girl group ALICE released their latest single “Power of Love” last May 4, 2022. Members EJ, Do-A, Chaejeong, Yeonjae, Yukyung, Sohee, and Karin’s honey-like vocals definitely gave life to this emotional ballad. It details the emotions of longing for a distant loved one but never losing faith in their connection—the perfect song for these tumultuous times.

They have the power to heal the world with their beautiful vocals. ❤ ALICE is flying away and meeting PH BLRIS at #BeginAgain_KPOP!

Watch their special message for you: pic.twitter.com/At2ZUwzSwR

Prices are as follows: 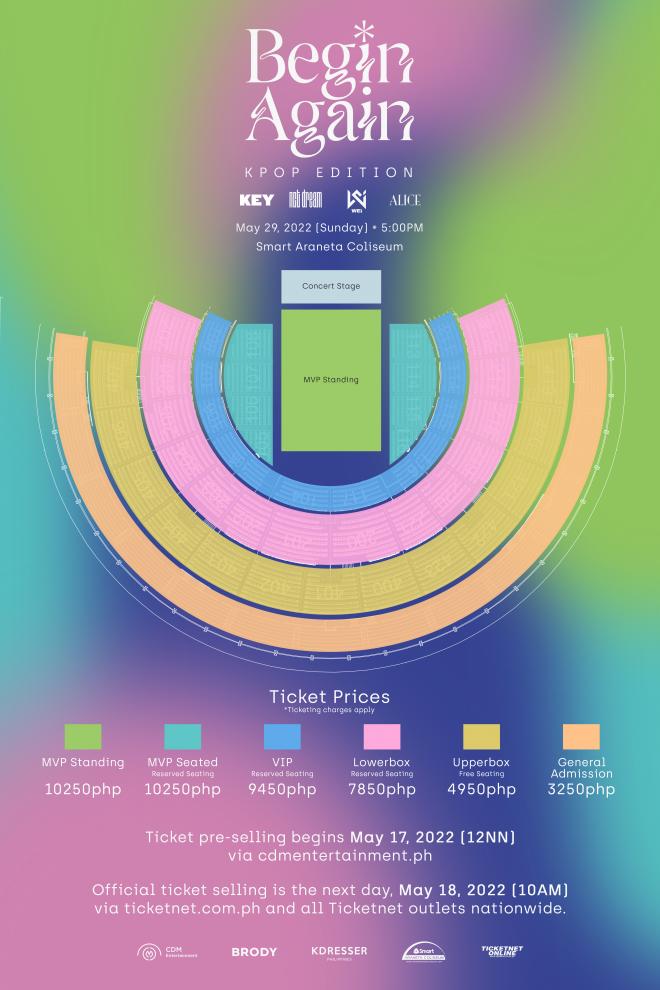 You may refer to the post below for the list of Ticketnet outlets per CDM Entertainment’s advisory:

Ushering the long-awaited K-Pop concert in the Philippines could overwhelm eager fans. Make sure to read through the guidelines for a smooth and happy concert experience! 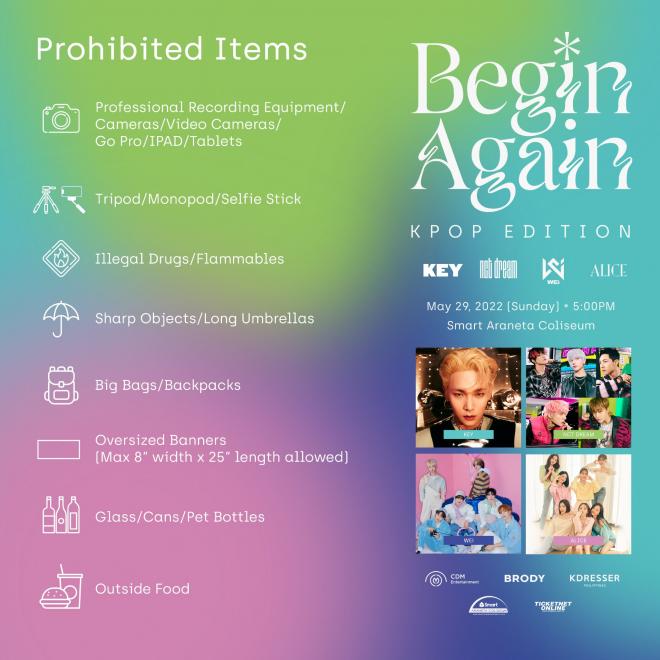 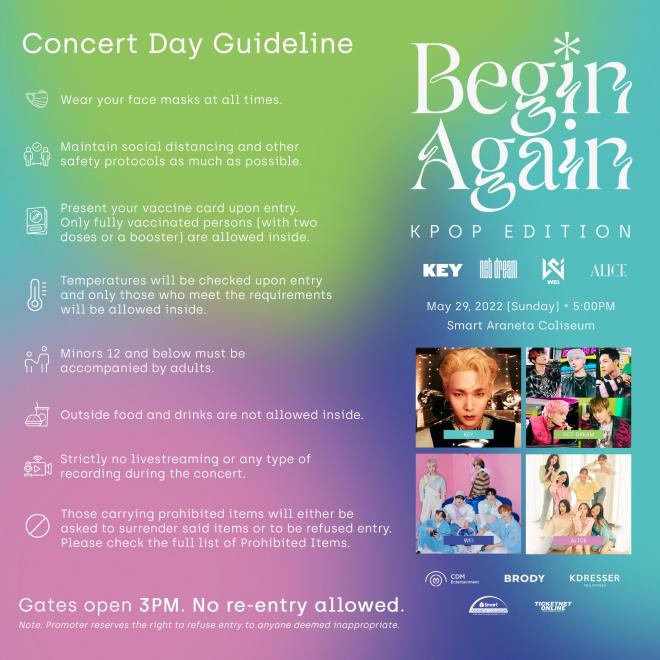 Don’t miss this chance to make new happy memories with NCT DREAM, KEY, WEi, and ALICE.  This event is brought to you by CDM Entertainment in partnership with BRODYWORKS. For more show updates, visit CDM Entertainment’s website or follow them on Facebook, Twitter, and Instagram.