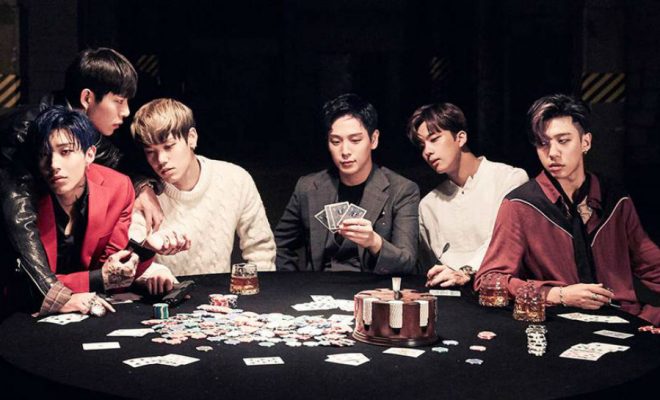 B.A.P Looks Back At Past Five Years Since Debut

Korean boy group B.A.P celebrated the group’s fifth anniversary on January 27. The members gathered together, and looked back on their past five years in the industry.

“It feels like yesterday when we debuted,” Himchan began. Jongup then relayed his thoughts in achieving five years in the music scene. “I’m so glad it has already been five years,” he said. He also looked back to the group’s debut showcase which he recalled the most memorable moment of his shoe coming off during a performance.

The other members chimed in with their own accounts of stage incidents like ripping of pants, hitting oneself, being hit with microphone, hands getting chapped and cuts on their hands.

B.A.P, which stands for Best Absolute Perfect, made its debut in 2012 under TS Entertainment. The group debuted with the track Warrior from the extended play (EP) of the same title. The track spoke of the social injustices.

“For the past five years, you’ve stayed with us,” Youngjae said. The fans, according to him, have also become adults, which made him realize that a lot of time has already passed since they first performed. He was also nostalgic as he recounted that he had just graduated high school at the time of B.A.P’s debut.

On concerts, music shows and memories

The members then began sharing their memorable experiences especially on music shows and concerts. “Looking back, it was amazing to be on a music show,” Youngjae said. According to B.A.P, in the past, they were not nervous but their minds were blank during performances. “We practiced so much so we were confident,” continued Youngjae.

However, as they got older, nervousness started to kick in when they took the stage. “Surprisingly, I felt nervous after two years since we debuted,” Youngjae said.

Daehyun also named their first concert at Olympic Hall and their first fan meeting. “I still remember our fan meeting event where we wore green outfits. That was quite big. All of us had blonde hair,” he said.

For youngest member Zelo, all he could remember was being busy during their debut year. Himchan and Daehyun, on the one hand, looked back on their busiest days during the promotion of their sixth EP Badman. The group juggled album promotions, overseas concerts, music video filming, among others.

“I lost weight the most back then,” Daehyun shared. “All of us were so skinny,” he continued.

On awards and wishes

“It’s so meaningful as you can get it only when you are a rookie,” Daehyun said.  “There were so many new groups who debuted that year we got the awards. It was meaningful, and I was so grateful,” he continued.

B.A.P also spoke of its wishes for the group during the live broadcast. Jongup said he hopes that they could stand on stage longer and do their activities for a long time. Himchan, on the one hand, shared his wish to make acoustic arrangements and hold an acoustic concert. He added that he wants B.A.P to release seasonal albums. Daehyun also wishes to release a Christmas album so people will be reminded of the album during the season.

Last November, the group released its second studio album Noir with the title track Skydive. Leader Yongguk did not participate in the promotions of the album due to anxiety disorder. The group has also embarked on a Japan tour in 2017, visiting Tokyo, Osaka and Nagoya.

In related news, B.A.P will be gracing the Philippine stage once more on March 2 for the ‘One K Global Peace Concert’ at Mall of Asia Arena.