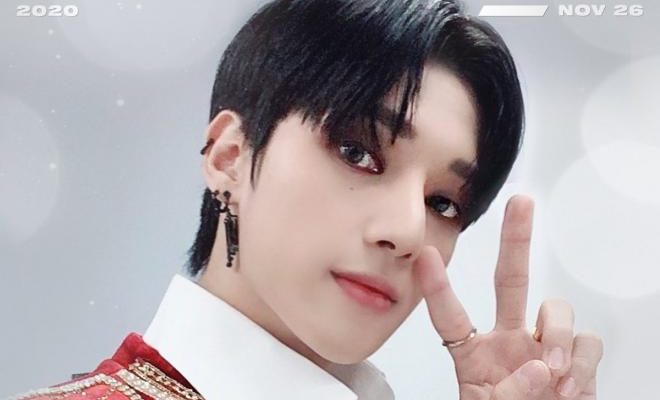 ATEEZ’s charming and multi-talented vocalist Wooyoung celebrates his birthday today! In commemoration of the event, take a look at the artist’s endless talents and charisma!

ATEEZ’s vocalist Jung Wooyoung can be considered an epitome of talent. From his performing skills to his dynamic personality, it is no wonder that he became an idol. Perhaps one of the most charismatic artists to emerge from the industry, he continues to display an endless range of talents and charming qualities that captivate fans and non-fans alike.

In honour of his birthday, take a look at the incredible moments the artist shared with fans so far!

As one of ATEEZ’s vocalists, Wooyoung immediately captured listeners’ hearts with his unique voice. Both powerful yet expressive, the vocalist displays a wide range. In particular, the singer treated fans to a cover of Nell’s track “Time Spent Walking Through Memories” on Twitter, highlighting his vocal strength.

Additionally, ATEEZ’s “MIST” from their album Treasure EP.Fin: All to Action is a fan favorite, in large part due to his outstanding performance. As one of ATEEZ’s more whimsical ballads, his high notes during the song’s chorus carries the track’s sentimentality and yearning perfectly.

ATEEZ’s carved a distinct place in the K-pop industry, becoming known for their intense performances and striking stage presence. Besides his beautiful voice, Wooyoung contributes immense skill to the team’s complex choreographies with his own polished dancing.

Portraying both power and sensuality, the artist’s distinct dancing style compliments and enhances the group’s stages. Recently, the artist posted a cover of MONSTA X’s “Love Killa” on Twitter as a gift to fans who often ask for dance practice videos due to his captivating performances.

Additionally, Wooyoung portrays his distinct dancing style during ATEEZ’s “INCEPTION” performances. As one of the group’s more modern-inspired choreographies, the artist’s smooth execution and passionate expressiveness communicate the song’s message brilliantly. His performance is emblematic of ATEEZ’s envy-worthy stage presence and the result of countless hours of dedicated practice for his craft.

Furthermore, while he is a dancer, he also dabbles in choreography. Both Wooyoung and Seonghwa helped choreograph an early version of the group’s debut track, “Pirate King”. Moves from this early version were kept in the finalized dance routine, showcasing the members’ dance knowledge extending from performing to the choreography itself. Additionally, his choreography skills display his inherent understanding of performing as an art, transferring his individual dance skills to envisioning a routine for the entire team.

An admirable trait Wooyoung shares with fans is his passion for his interests. Despite facing rigorous schedules as an idol, which only increase as ATEEZ’s global stardom skyrockets, he continues to make time for his personal hobbies and goals. This includes his interest in filming and editing, which resulted in his YouTube project “O.S.O.S (Our Side Of the Story)”.

Originally a vlogging project, Wooyoung changed the title to reflect his desire to show a variety of content stating, “I don’t like how the word ‘Log’ creates limits”. The artist expressed his hopes to share a variety of filmed and edited content, providing fans with a more intimate look into ATEEZ’s work and daily life.

Moreover, he shared his keen interest in cooking. During ATEEZ’s individual member series, the vocalist decided to pursue this interest, sharing a range of cooking videos. While the videos allowed him to dabble in cooking and share this love with fans, he also dedicated himself to achieving a Korean cooking certification as well.

Wooyoung often inspires his own fans to remember their passions as well as hobbies and to continue pursuing them despite how hectic life may be.

He also inspires fans through his love of knowledge, which he continuously shares to ATINYs across ATEEZ’s SNS channels. In particular, the idol enthusiastically shares Korean culture with global fans. Besides Korean cooking, Wooyoung took to social media to celebrate Hangul Day, explaining the history of King Sejong’s first document in Hangul.

The artist can also be found making various historical references throughout ATEEZ’s contents, spreading Korean culture and knowledge with fans. 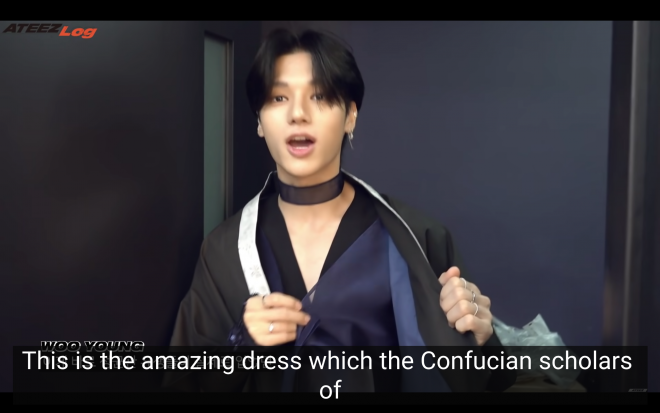 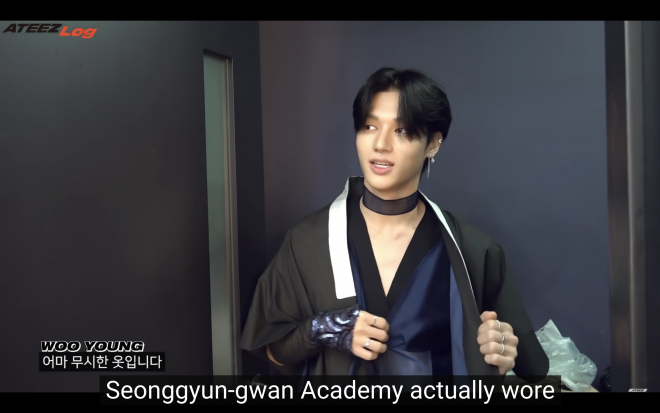 His thirst for knowledge extends to language. Wooyoung often searches for meaningful and inspirational Latin phrases. During an ATEEZ Twitter Blueroom event, the artist explained that during his search he found the phrase, “Amicus Ad Aras”. Loosely meaning “a friend until death” or “a friend until the end”, he and fellow ATEEZ member, San, use it as a signature slogan for their beloved friendship.

Through sharing his love for knowledge, fans often follow his admirable lead and continue to learn from the world.

Love for family and friends

One of Wooyoung’s most endearing traits is his immense love for the people in his life. Though playful and mischievous, the artist continually shows his sincere appreciation for friends and family. In one of his most moving acts, he transferred companies during his trainee years to KQ Entertainment.

Despite not knowing much about the company, he decided to follow his dear friend Kang Yeosang and debuted in ATEEZ together, vowing to fail or succeed with him. Furthermore, Wooyoung expressed his gratitude that his choice led him to his other precious ATEEZ members. 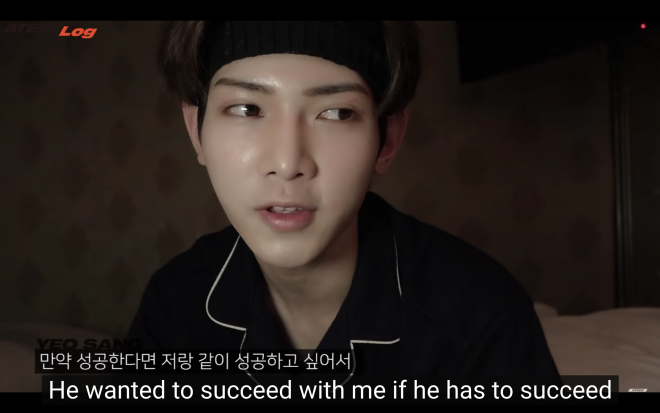 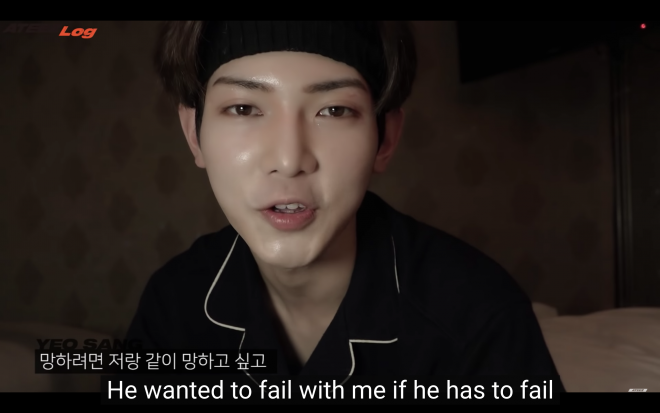 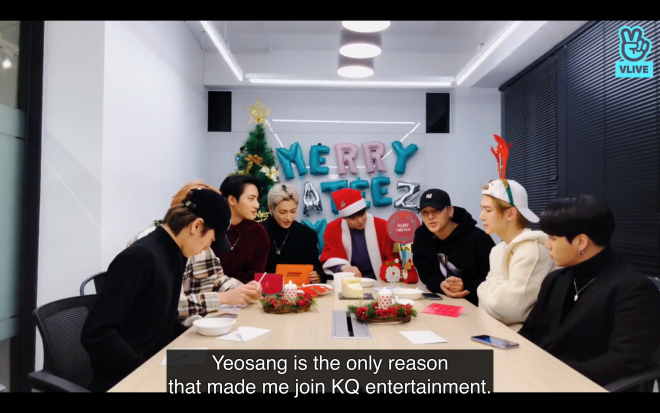 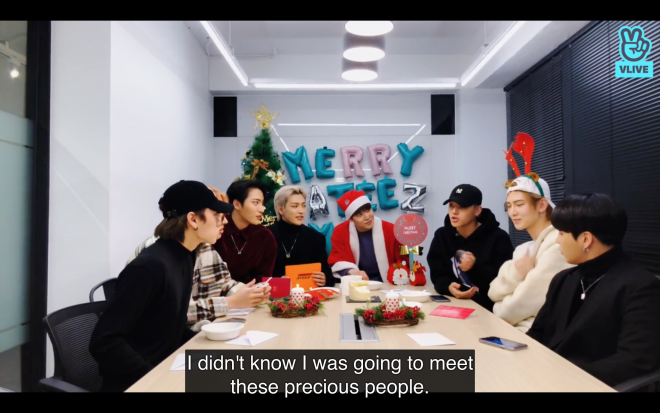 Wooyoung also shares his heartwarming love for his younger brother Kyungmin. Whether sharing footage of the two interacting in his YouTube videos or sharing a birthday dedication on ATEEZ’s SNS platforms, he continually expresses his love for his little brother with fans.

His innate care and kindness for others extends to his many friends in the industry. Despite only debuting two years ago, the artist has racked up a long list of friends that include stars such as TXT’s Yeonjun, Stray Kids’ Changbin, Golden Child’s Tag, and SEVENTEEN’s Seungkwan. As a social butterfly who brings happiness to many, he radiates warmth and friendliness. 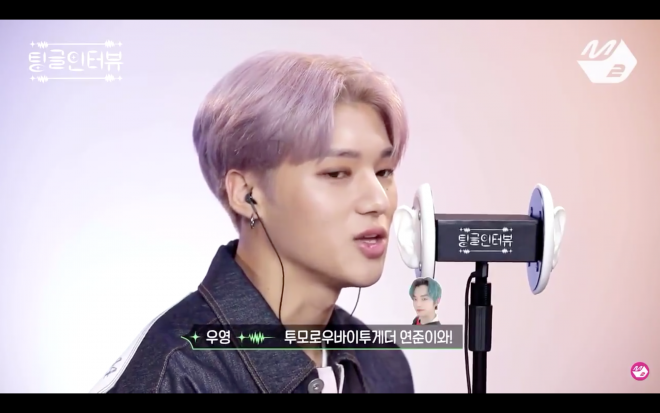 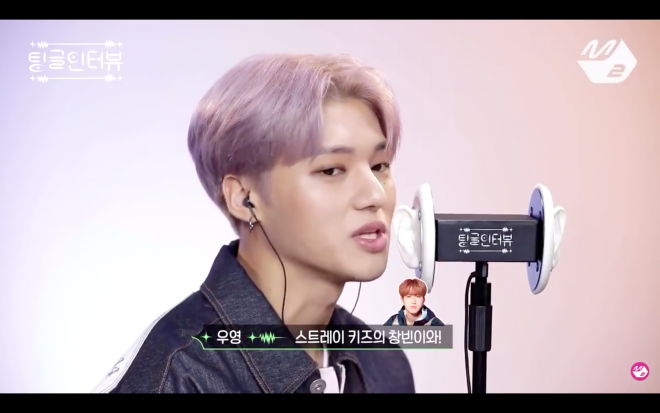 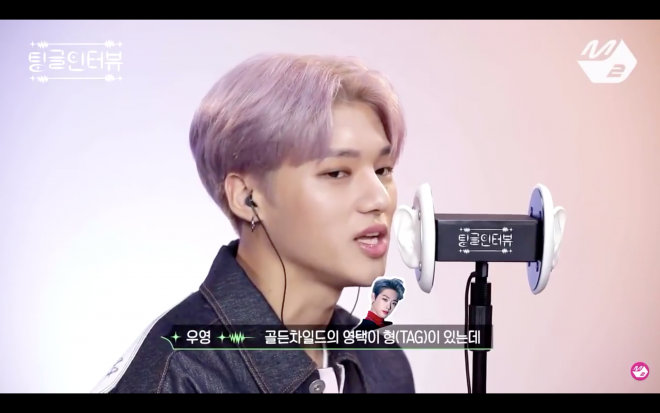 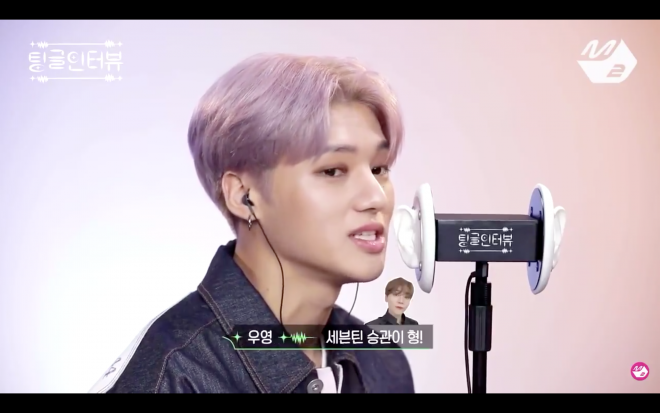 As member Seonghwa explained during one of his VLIVEs, “It’s hard not to love Wooyoung”, and all ATINYs can agree.

Meanwhile, fans can look forward to seeing ATEEZ during their upcoming performance during the DOUBLE HAPPINESS: Winter Wonderland Festival.