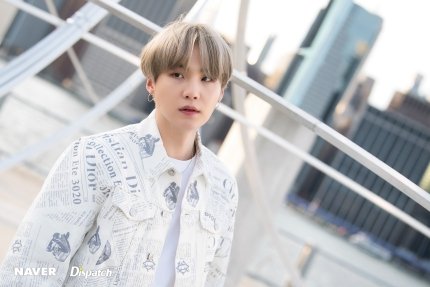 #HappyBirthdayYoongi: Memorable Moments Of BTS’ Suga When He Showered Love Towards His Members And ARMY

A little while after midnight, BTS posted a video on their Twitter account which shows the members celebrating Suga’s birthday with a cake. Referring to Suga’s real name the caption of the post reads, “Yoongi hyung is cute, so he’s two years old.” While in the video fakes acting surprised at the members throwing him a party.

On the other hand, ARMY celebrated the occasion by trending various hashtags related to Suga’s birthday on Twitter.

BTS’ Suga is the fluffiest ball with the greatest amount of love in his heart. Like his name, he has the sweetest heart and there has been numerous times when he has shown his love towards fellow members and ARMY.

As we celebrate his birthday, here is a throwback on the times when Suga showered love towards fellow members and ARMY:

Wrote a heart-touching letter to V and Jungkook

In 2018 Festa, V revealed that he received a long letter from Suga and at the end of the letter, Suga wrote that he loves him. V said that he was so touched on receiving the letter that he cried after reading it. The youngest member, Jungkook too, got a letter from Suga where he had expressed his love.

Suga’s love for ARMY is immense and it is reflected in the meaningful actions undertaken by him. In 2014, on his birthday, Suga gave gifts and hand-written notes to ARMY who attended his birthday support event. In spite of being tired, he took the time and effort to prepare gifts for the fans.

Again in 2015, on his birthday he prepared presents which included his polaroid photos and hand-written notes for ARMY.

Remember when Hoseok had to spend Christmas by himself and yoongi texted him asking about what he's doing so he told him that he was in the dorms,so yoongi instead of spending Christmas with his family he bought chicken,and went to the dorms to be with him pic.twitter.com/0FsZZqodDh

Cooked meals for the members during Bon Voyage

During Bon Voyage which is travel reality show featuring BTS, Suga took the initiative of cooking meals and grocery shopping. The members too were impressed with his cooking skills and praised him for his hard work.

During Bon Voyage Yoongi made delicious meals for everyone. Our #ChefMinSUGA, there is nothing you can’t do ? Not only does he rap, sing, dance and produce music, but he makes delicious food too! #SUGA @BTS_twt pic.twitter.com/macsOK9Mu1

Gave away his food to J-Hope

In an episode of RUN BTS! Suga offered his food to J-Hope even though it was limited and said that he could not eat if the younger member is not eating. Suga then proceeded to say that he is full by watching J-Hope eat.

[slams fist on soft button] how yoongi gave up his portion of the food for hoseok because it was enough seeing him eat. it's been YEARS but i still cry over this pic.twitter.com/aK8oZMkEPo

Praised Jimin’s voice when he was down

In an episode of BTS: Burn The Stage series, when Jimin was struggling with his voice, Suga told him that Jimin’s voice is his favorite. He constantly kept reassuring Jimin that everyone loves his voice. Besides this, there have been many instances when he had praised Jimin’s voice.

remember when jimin was going through a tough time with his voice and yoongi made sure to tell him that jimins voice is his favourite and everyone loves the way he sings :((( the kindest hyung ever#ItsSugaHyungDay#HappyBirthdayYoongipic.twitter.com/RaVxQkhaq3

the way yoongi talks about how much he loves jimin's voicepic.twitter.com/dh1Pg41YhP

Made a candle for V with his finger

During their rookie days, in a fan meeting as the members were blowing out candles, V missed out his chance. In order to make him feel better, Suga put his finger up as a candle and asked him to blow it.

throwback to bts second fanmeeting, when fetus taehyung wasn’t able to blow out the candles, yoongi noticed it so he put his finger up and told him to blow out the "candle" just to make him feel better pic.twitter.com/CNJtJPrlk4

Bonded with Jungkook over Irish Bomb

One of the highlights of Bon Voyage season 3 was Suga spending a quality time with the maknae and shared his knowledge on alcohol with him. They also created an iconic quote for themselves which is “Friendship is Irish Bomb.”

do you remember when yoongi and jungkook bonded over irish bombs pic.twitter.com/yrLQDogauH

Showed his support towards RM

Being the leader of the group RM carries a lot of weight and responsibility on his shoulder. In 2018 Festa, Suga wrote a message for him that says “I see you carrying the burden of being a leader, I see it and I’m sorry”. He acknowledges the importance of the leader’s role and expresses his gratitude.

Remeber during Festa last year, they wrote anonymous letters to each other and Yoongi wrote one to Joon saying “I know you work hard and struggle a lot as our leader. I always feel sorry and thankful hwaiting” pic.twitter.com/HOADAh5I1E

Encouraged ARMYs with his kind words

Be it through his speeches in interviews or through his honest lyric writing Suga’s words has been a great source of comfort for ARMY. His words show that he is a very considerate person and wishes happiness for everyone.

For ARMYs who struggle to find a dream, he said that it is alright to not have dream and they just have to be happy.

Yoongi has always been such an encouraging person to each and every Army!!
Thank you for teaching us how everything is fine is you are happy in life ㅠㅇㅠ#ThankYouYoongi pic.twitter.com/EYCWmGMTeh

For ARMYs who might be insecure about themselves, he told them that they must not change themselves and he loves them just the way they are.

thank you so much for encouraging armys to not change for someone else, you're the best idol ever, min yoongi.♡ pic.twitter.com/T0tIzkcxta

Gave his water bottle to V

Suga is the kind of person who is observant and secretly takes care of others. In one of the events, V was looking for a water bottle but could not find any. Suga noticed that and so gave his bottle to him. This was probably one of his cutest tsundere moments.

yoongi noticed that taehyung couldn't find a water bottle so he gave him his aww pic.twitter.com/06dng33iSR

Praised Jin whenever he got the chance

Eternal roommates as they are, Suga is always supportive of Jin. Though they may jokingly make fun of each other, they praise each other equally the same. Suga has been vocal about praising Jin’s qualities be it singing, dancing or acting.

i live for this concept : Yoongi praising Jin’s vocals and awake pic.twitter.com/tpKZWVzQSC

Brought cold medicine for the members

In one of his Vlives, Jimin mentioned about the time when all the members met after their vacation. Everyone were happy to meet after a long time and were hugging each other. Suga was making fun of them, but then he suddenly went out and brought some cold medicine and nagged everyone to take it.

yoongi nagged everyone to take cold medicine because it was cold (prolly in NZ) and jimin thought it was cute?????? pic.twitter.com/KXnQroZx50

Besides what were mentioned in this list, there are infinite number of instances when Suga has displayed love for his members as well as ARMY. There is a misconception among some people that he is a cold person when in fact he has the warmest heart who knows only how to love and comfort people around him.

He treats his members like family and when he is with them, he makes sure to take care of everyone which is clearly evident from Bon Voyage, Burn The Stage series, and Burn The Stage: The Movie.

On this special Yoongi Day, we hope he keeps striding forward with all the success in the world along with BTS and ARMY while also staying happy keeping his gummy smile intact.

Many many happy returns of the day to Suga!