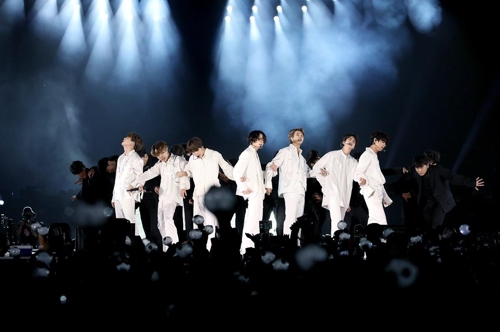 BTS Thanks 30,000 Fans For A Meaningful And Memorable First-Ever Concert In Saudi Arabia

Together with thousands of ARMYs in attendance, BTS members surely created wonderful memories at their first-ever concert in Saudi Arabia!

Topping the trending list across social media, the worldwide K-Pop boy group BTS has officially made their Saudi Arabian debut at Riyadh’s King Fahd International Stadium through Love Yourself: Speak Yourself today. 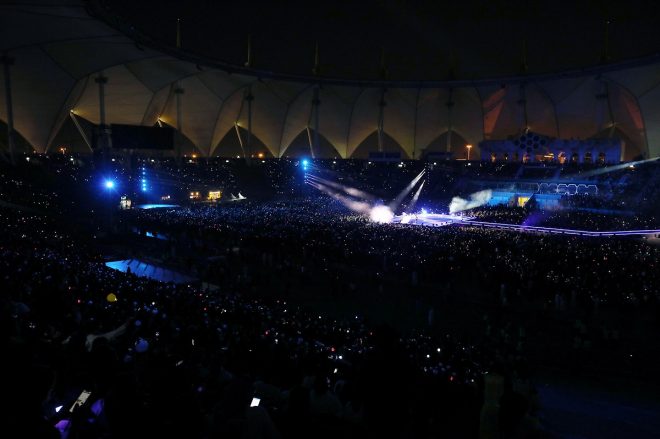 Welcomed warmly by their beloved fans, RM, Jin, Suga, J-Hope, Jimin, V, and Jungkook were able to thrill the audience as they graced the stage with their amazing line-up of songs. Even ARMYs in other countries were able to enjoy the highly-anticipated concert through a special live broadcast from V Live.

Entering the stage while donning their immaculate white outfits, the K-Pop septet kicked off the show with a powerful performance of “Dionysus”, a hip-hop track off their record-breaking album Map of the Soul: Persona. Hyping up the passionate crowd, the boys then showed off their impressive dance routines in the 2016 hit song “Not Today”. 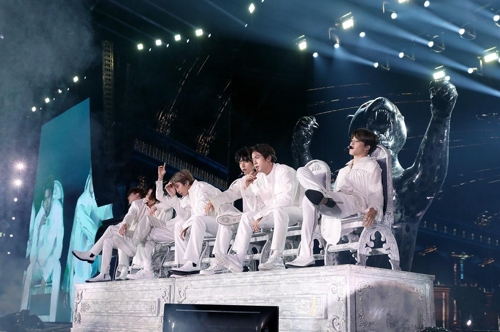 Soon after, the boys gave their greetings to the thousands of fans present at the concert. In particular, they delighted the local crowd by trying their best to speak simple Arabic words. Before hitting up the stage with their next track “WINGS”, the group’s “Golden Maknae” Jungkook first said a short but sweet message to everyone: “You (ARMYs) gave us wings to fly all the way here from Korea.”

In addition, the handsome and multi-talented idols were able to charm the audience with their respective solo performances. 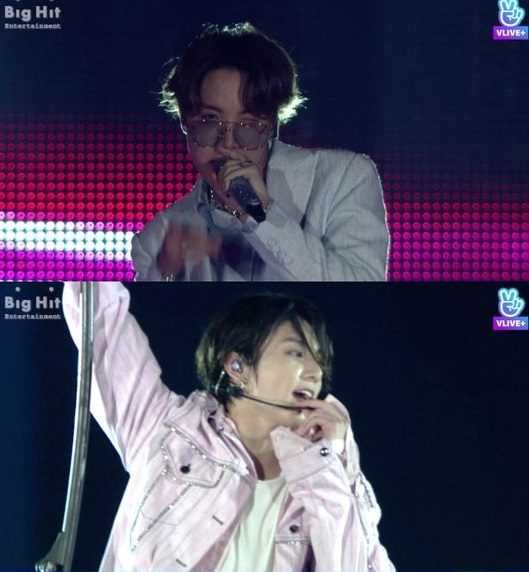 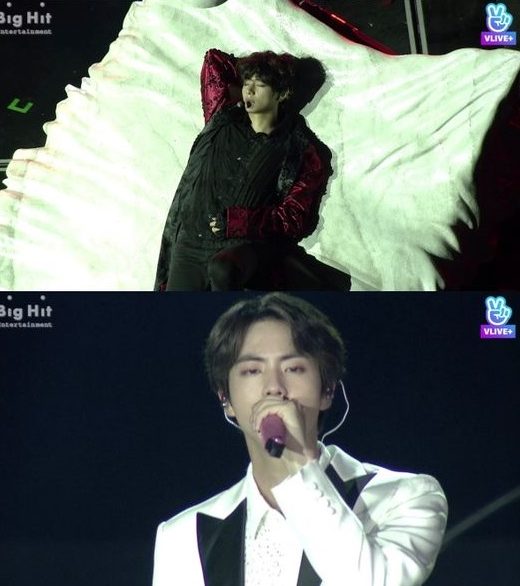 Just like their usual concert which stretches out for more than 150 minutes, the boy band was able to gift fans with stunning numbers of some of their biggest hits. Naturally creating beautiful synergy with their beloved Saudi Arabian ARMYs, the K-Pop stars performed their tracks including “Best Of Me”, “Boy With Luv,” “IDOL,” “Fake Love,” and a special medley of “Dope,” “Baepsae”, and “Fire”. 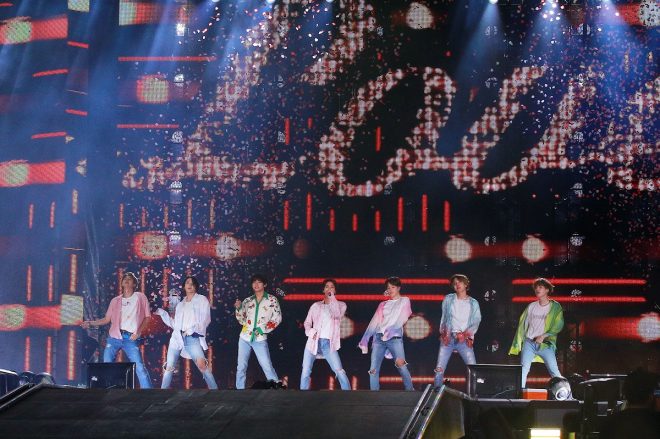 Powered by their stunning vocals, Jin, Jimin, V, and Jungkook serenaded the audience with a heartfelt performance of “Truth Untold”. The remaining members RM, Suga, and J-Hope, also known as the “lethal rap line” likewise wowed everyone as they spit out fiery verses through their “Tear” number.

With overflowing charisma, the boys followed it up with an explosive “MIC DROP” stage while sporting their special DIOR ensembles.

After opening their encore with fun-filled performances of “Anpanman”, “SO WHAT”, and “Make It Right”, BTS members then surprised Jimin with advance birthday greetings.

“Tonight is truly a night that I won’t be able to forget,” Jimin began. 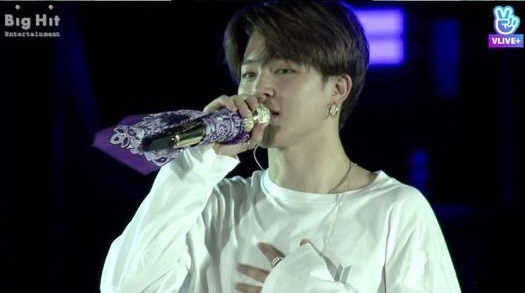 Narrating how he forgot his special day due to too much anticipation to see their beloved fans, he then added: “Thinking of seeing you, I had forgotten it was my birthday. Thank you for the happy birthday wishes, and it’s a good day, being able to spend my birthday with my fellow BTS members. Thank you.”

V likewise expressed how incredible it is to be able to meet such an amazing audience by saying, “There are so many fans here. It’s hard to believe that we can fill a stadium like this. Just being here feels so good. We’d love to come back next time, and I think we’ll be able to go home happy after having seen all of you. Thank you so much.”

Amazed by how jam-packed the venue is, Suga then shared that he is happy with the crowd’s enthusiasm. “This is our first performance in Saudi Arabia. We were so surprised because you all were so energetic,” the rapper said.

Additionally, Jin revealed how much he loves performing with his members. “I love our members, who really had fun performing tonight, and I really love ARMY.” He also promised that their band will continue to work hard to reciprocate the love. 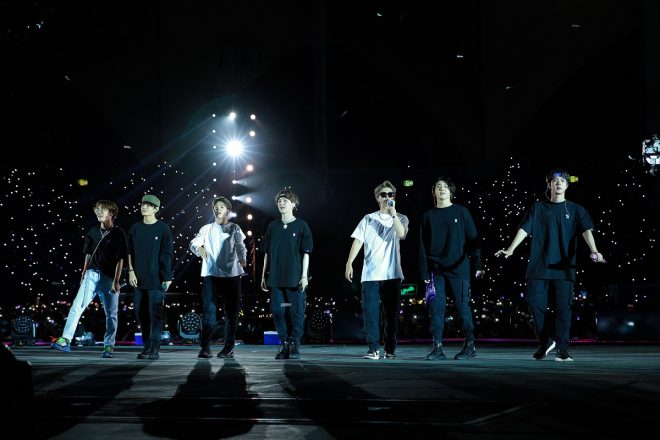 Next up is J-Hope who sweetly revealed that he really missed the fans’ thunderous cheers and passionate atmosphere. “I was really nervous, but I was also so happy to see all of you for the first time in a long time. Thank you so much for such a meaningful concert.”

Lastly, BTS’ beloved leader RM says, “We didn’t know we could perform here. Thank you for inviting us and thank you, everyone, for coming to see us. I think we’ll remember this moment even after we go back.”

Following their surprise birthday greetings to Jimin and sweet messages to ARMYs, the K-Pop septet then closed out the party with a beautiful stage of “Mikrokosmos”. 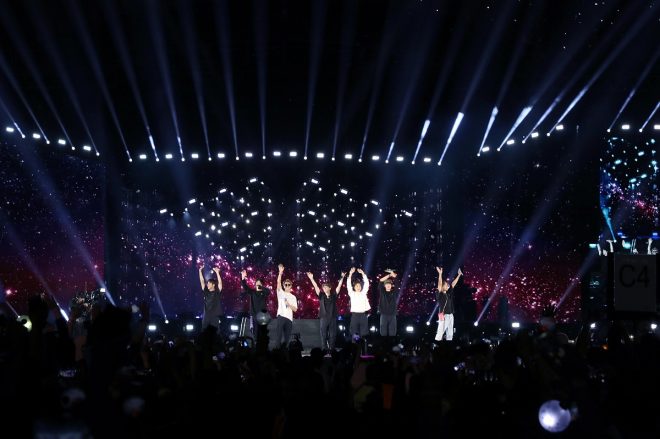 Later this October, BTS will soon wrap up their Love Yourself: Speak Yourself world tour with not just one, but three sold-out shows in Seoul’s Olympic Stadium on the 26th, 27th, and 29th.

Meanwhile, in other news, the group has recently confirmed their attendance for the upcoming Christmas event of iHeartRadio. Titled Jingle Ball tour, the boys will grace the December 6 stop at the Forum in Inglewood, California together with international acts Taylor Swift, Katy Perry, Halsey, and more.