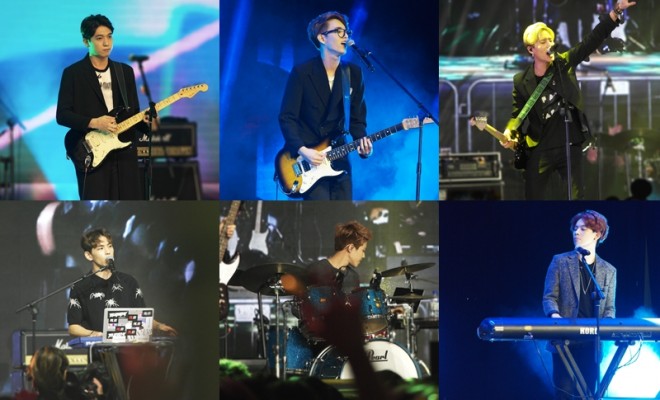 Being a band in South Korea’s music industry does mean that some things might stray from the average, cookie-cutter idol group mold. There would be a significant lack of flashy choreographies, with straightforward and no-frills performances instead. The members of a band usually jam to the music’s rhythm while handling their instruments with masterful ease, making minimal movements as they perform.  However, do not let that description fool you- the energy of being on stage is still, or even more explosive as any other performances.

JYP’s newest boy band DAY6 was in Singapore on December 5 for a fan meeting at the Marina Bay Sands Convention Centre, only after two months since its debut. Decked in white and black suits, members Jae, Sungjin, Junhyuk, YoungK, Wonpil, and Dowoon kickstarted the afternoon show with Out of My Mind and Habit. 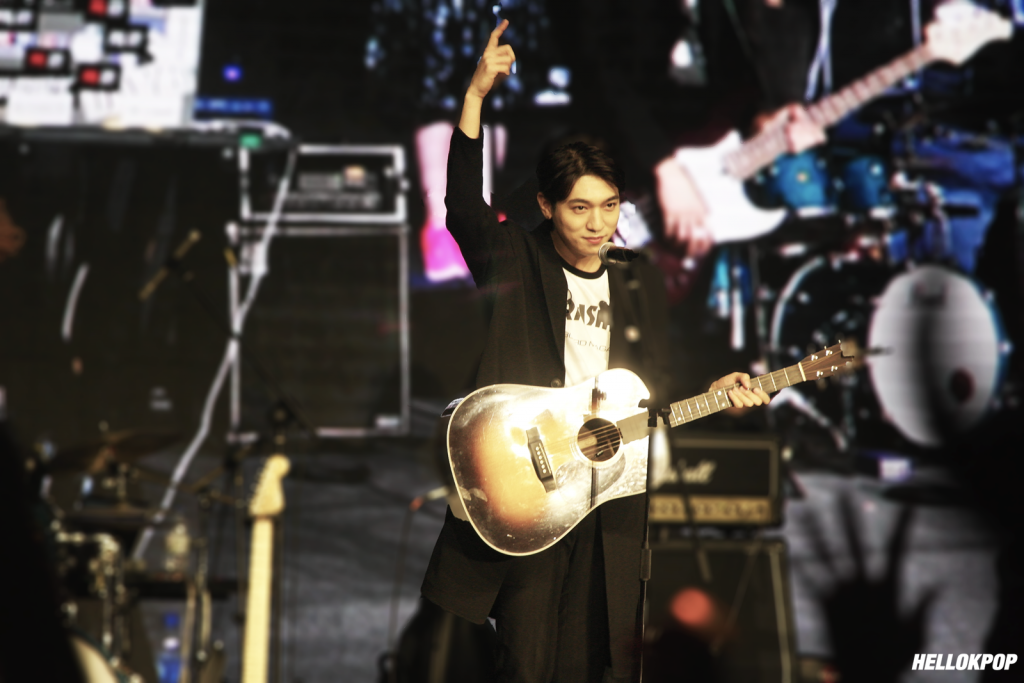 After the opening performances, the well-mannered boys greeted their fans with bright smiles. They said that although it was DAY6’s first time in the country, they felt welcome upon arrival. Without missing a beat, the boys then showcased another 3 songs; You, One Republic’s Stop and Stare and a cover of Wonder Girls’ classic hit, Nobody. The loud cheers and energetic responses from the fans was a great measure of DAY6’s flawless performances. 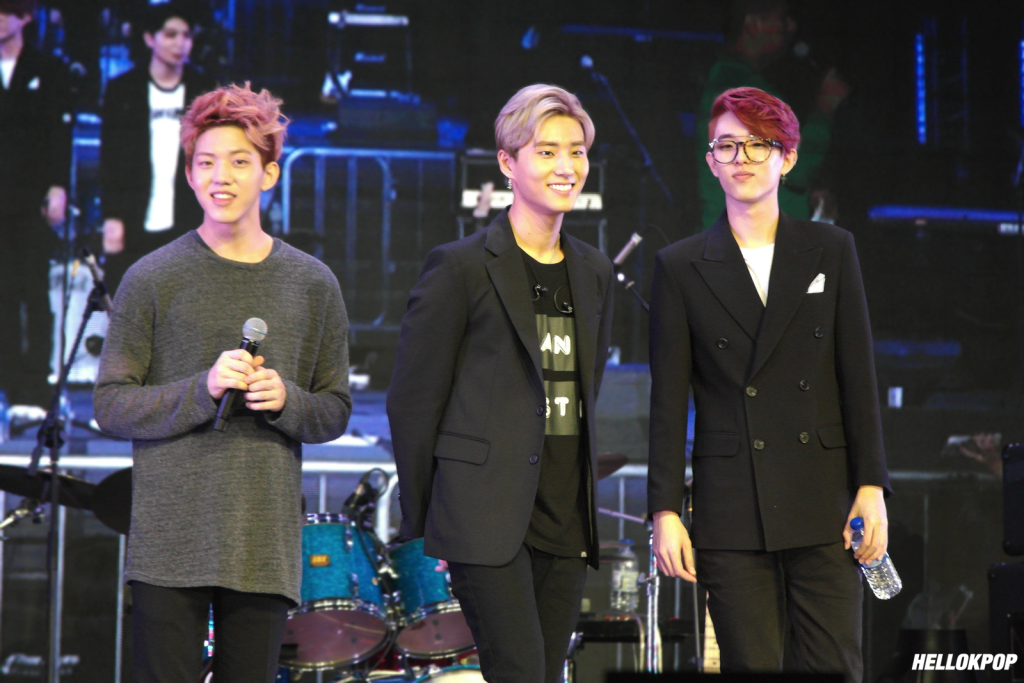 DAY6 then threw fans into a frenzy when they started to pick up 12 fans among the crowd through a lucky draw for a game session. The excitement did not stop there, especially for the lucky ones who were invited up on stage for the game dubbed Identity. The fans would be blindfolded, and had to guess the identity of the voices while the members whispered closely into their ears. The Identity game was a great chance for fans to have closer interactions with their idols, while still keeping to reasonable boundaries.

The playful members were totally absorbed in the game. They even changed their voices to make it more challenging. Although every member whispered “Annyeonghasaeyo” to the fans, Jae, who is dubbed Chicken Little because of his resemblance to the character,  certainly reminded fans of the fact as he whispered the  word “chicken.”

Three fans managed to guess all the members right, and proceeded straight to fight for the title of Champion in the second round. The extremely lucky winner guessed the identity of the voice correctly (YoungK), and her prize was an amazing chance to take a selca with the DAY6 members. The crowd was definitely envious of her. 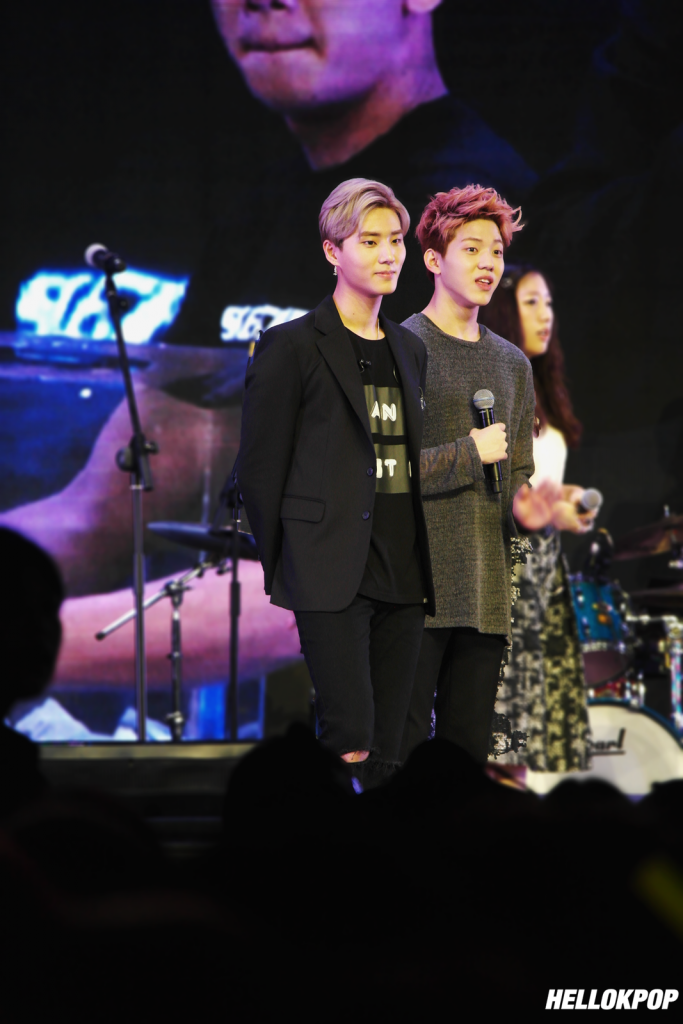 The second game was a guessing game, which is similar to Charades. The first person had to draw out a designated object, and the second member had to draw based on what they see. 6 fans and the members were told to stand in a line, and ‘King of Fanservice’ Jae quickly stood behind the fans. However, when the MC quickly told him to stand in another position, he seemed to be lost about where he supposed to be. He then funnily blurted out “I’m so confused!,” eliciting peals of laughter from the crowd.

The members then challenged their inner artists. Although everyone did well, Dowoon and Jae had a standout drawing as they ended up drawing a beautiful unicorn, while the answer was an elephant. The group (consisting of three fans) who won the game was able to get a selfie with its partner.

After the funny games, the instruments were brought back on stage, and DAY6 continued to jam to Like a Sun and Color. Fans also thoughtfully prepared a  surprise birthday project for YoungK, whose upcoming birthday will be on December 19, by presenting a short compilation video and singing the Birthday song to him. Feeling touched, YoungK asked fans when they found the time to prepare all this, relaying: “You guys are amazing!” He thanked the fans and showed his famous heart-shaped fingers to them. 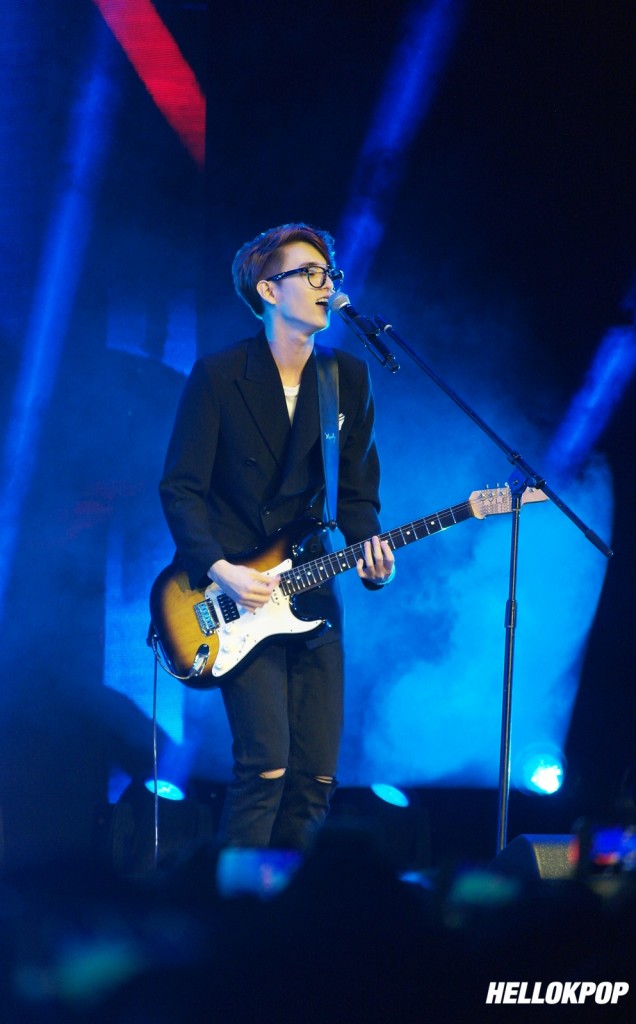 DAY6’s debut track Congratulations was the next song in the band’s setlist, and seemingly the last one as well. Although the members left out a few of the song’s beginning lines, fans quickly picked up and sang for them instead. When the performance ended, the members went backstage, and fans eagerly waited for them to return on stage for the encore. The wait was worth it as the boys kicked off the encore with a highlight medley that featured some of Bruno Mars’ hits; Grenade, Count On Me and Runaway Baby. The amazing energy of the members got fans all up on their feet. They then encouraged the crowd to jump and let loose with them. 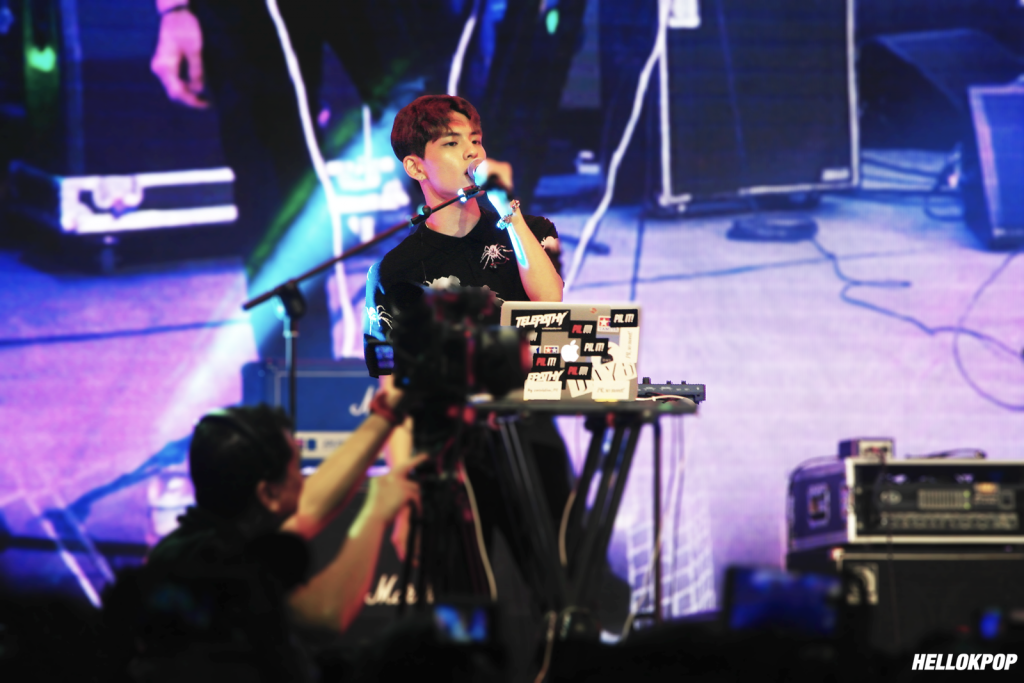 After the song, the members took a breather to say a few words to the crowd.
Wonpil revealed: “This is our first time here. Thank you so much for your love. I never expected this love to happen, but we feel grateful. I’m gonna try my best to repay the love that you guys have shown tonight!” 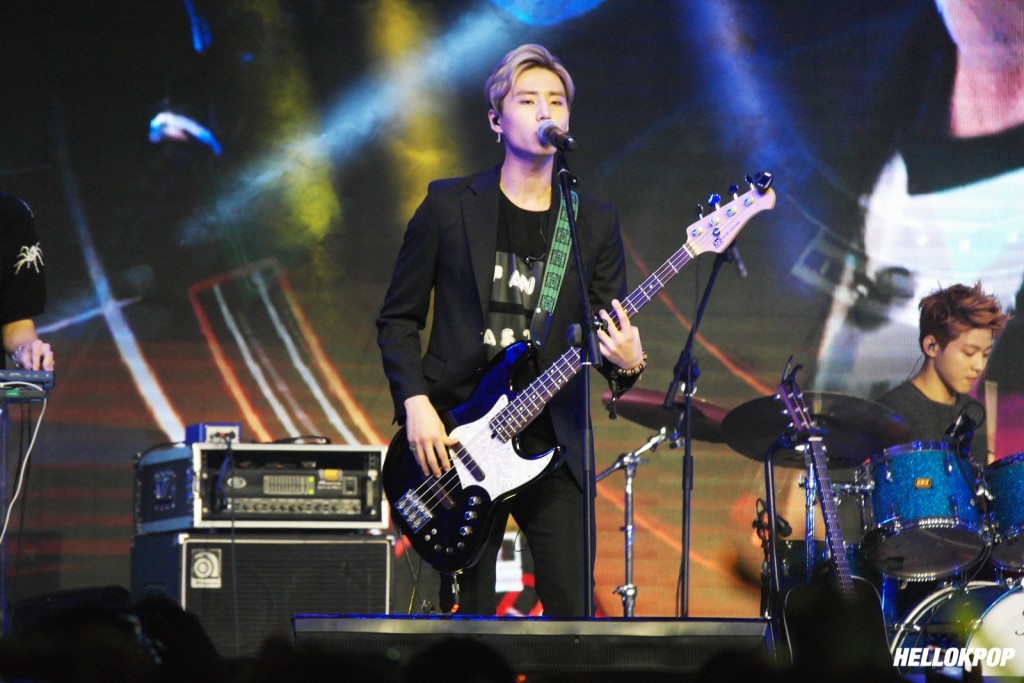 YoungK confessed and shared: “My parents are here today actually. They flew in from Toronto.” He further divulged that his dad had never seen his performances before since his debut, but his mom did. His confession made the fan meeting more significant toDAY6, his parents and the fans.

During his turn, Junhyuk expressed that in fact, the day of the group’s fan meeting in Singapore was also his mother’s birthday. He wanted to work harder to earn more money so he could “invite her to my show.” Meanwhile, Jae revealed his love for Singaporean food, stating: “We love the food. We love the atmosphere. We hope you guys had as much fun as we did!” 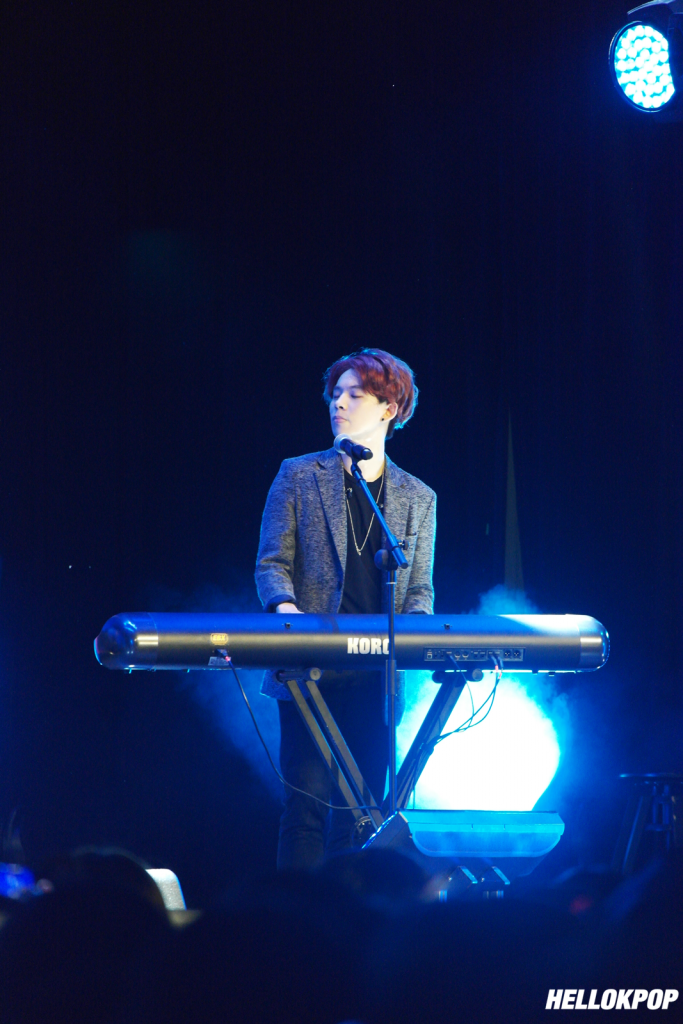 On that heartfelt note, DAY6’s first fan meeting in Singapore was successfully wrapped up with the band’s last song of the evening, Freely.

With their bright personalities and brilliant lives, DAY6 has an immense potential to be one of the biggest bands in the Korean music industry, and this fan meeting further solidified that fact. Do keep your eyes peeled for DAY6 as the band will surely have more amazing music lined up in the near future! 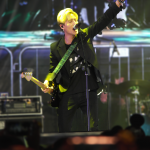 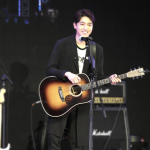 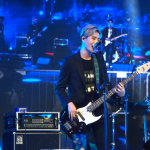 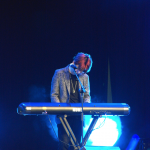 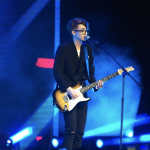 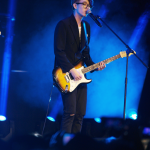 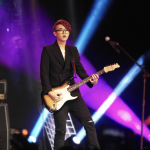 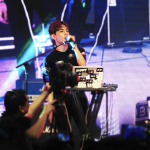 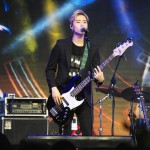 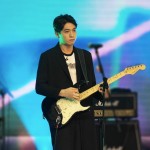